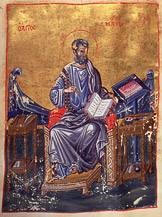 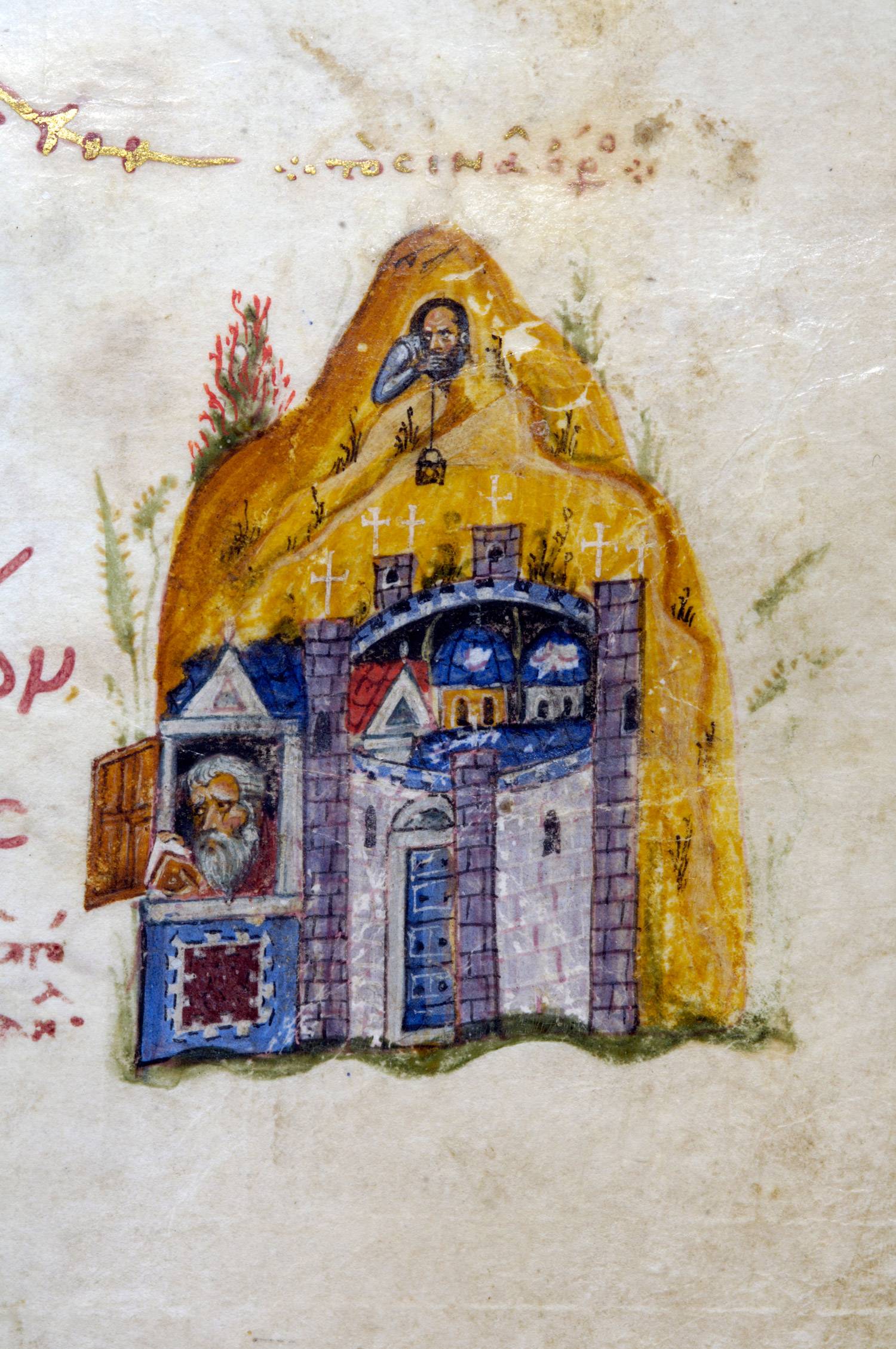 This illustration shows St. Catherine's Monastery on a brown hillside representing Mount Sinai, where Moses is said to have received the Ten Commandments. At left, an elderly monk holds an open book, probably Scripture or a prayer book. Behind the monastery is the Burning Bush. The illustration is reproduced from an 11th-century miniature in a manuscript that is part of the Princeton University Library's Robert Garrett Collection. Image: Courtesy of the Princeton University Library

Some of the Princeton University Library's greatest treasures will be on display in a fall exhibition that traces the long cultural history of the Greeks.

"The Greek Book From Papyrus to Printing" will focus on the Greek book as a physical object and a repository of Western civilization over three millennia. The exhibition will be on view from Monday, Sept. 8, through Sunday, Dec. 7, in the Main Gallery of Firestone Library.

It will include: important ancient papyri of Homer and the Bible, as well as other examples of ancient writing, chiefly from Roman Egypt; illuminated Gospels and devotional manuscripts, once in monastic libraries of the Byzantine Empire; manuscripts and early printed editions of classical texts, formerly in private libraries and in several cases annotated by leading Renaissance scholars; and illustrated liturgical books, travel guides and other manuscripts produced for Greek communities in the Ottoman Empire.

"The library is fortunate to have such rich Hellenic holdings because of private collectors like Robert Garrett [a member of the class of 1897], three generations of the Scheide family and other generous alumni, who have helped build these collections in support of research and instruction at Princeton University," said Don Skemer, curator of manuscripts in the library's Department of Rare Books and Special Collections.

Also on view will be Greek antiquities and icons from the Princeton University Art Museum, and a series of photographs by Bruce White taken in St. Catherine's Monastery on Mount Sinai in Egypt.

The exhibition explores ancient writing materials and book forms, the evolution of script and libraries, and the role of sacred books and libraries in the spiritual life of Byzantine monasteries, such as St. Catherine's and St. Andrew of the Russians on Mount Athos in Greece. It also shows the preservation of ancient learning, especially during the Paleologan Renaissance when the imperial capital moved from Rome to Byzantium (later renamed Constantinople), documenting the survival of Greek cultural traditions and civilization under Ottoman rule from the fall of Constantinople in 1453 until the Greek War of Independence in 1821-1829.

The Byzantine world preserved Greek language and letters, allowing Greek books to circulate freely from Constantinople to Greece, the Holy Land, Egypt, the Balkans and southern Italy. The Greek book and the migration of Byzantine scholars to Italy had a great impact on the Latin West, especially Renaissance Italy.

Garrett (1875-1961), a Baltimore businessman and trustee of Princeton, underwrote the library's acquisition of papyri during the 1920s and donated his extraordinary collection of more than 10,000 manuscripts to the library in 1942. Other major collectors of Greek manuscripts include the Scheide family of Titusville, Pa., and Princeton: William T. Scheide (1847-1907); John Hinsdale Scheide (1875-1942), a member of the class of 1896; and William H. Scheide, a member of the class of 1936.

In recent decades, joint efforts between the library and the University's Program in Hellenic Studies to enrich the holdings have been supported by the Stanley J. Seeger Hellenic Fund, established through the generosity of Seeger, a member of the class of 1952. New projects to improve access to papyri, medieval manuscripts and other materials in the Department of Rare Books and Special Collections also have facilitated this exhibition.

Most important among these projects has been "Greek Manuscripts at Princeton, 6th to 19th Centuries: A Descriptive Catalogue" by Sofia Kotzabassi and Nancy Patterson Ševčenko, with the collaboration of Skemer. The volume is to be copublished by the end of this academic year by the Department of Art and Archaeology and the Program in Hellenic Studies for distribution by Princeton University Press. This exhibition is organized in anticipation of the 2009-10 celebration of the 30th anniversary of the Stanley J. Seeger Hellenic Fund and the Program in Hellenic Studies.

To mark the opening of the exhibition, the Friends of the Princeton University Library will sponsor a public lecture by Anthony Grafton, the Henry Putnam University Professor of History, on Sunday, Oct. 5. The talk, titled "Greek Books and Their Readers: From Antiquity to the Renaissance," will begin at 4 p.m. in 101 McCormick Hall and will be followed by a reception in Firestone Library.

Other public programs are being planned in conjunction with the exhibition. The Index of Christian Art has organized an international conference to meet at Princeton on Thursday, Oct. 16, along with the meeting of the Byzantine Studies Association of North America in New Brunswick Oct. 16-19. The full program and further details are available on the index website.