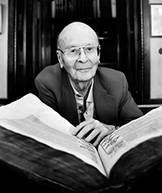 William Scheide, a member of the Class of 1936, musician, bibliophile and philanthropist committed to furthering the depth and breadth of the arts and humanities at Princeton University, died of natural causes at his home in Princeton, New Jersey, on Nov. 14. He was 100.

"Bill Scheide was a wise and compassionate gentleman whose generosity greatly benefited Princeton and our society as a whole," said President Christopher L. Eisgruber. "Bill established a lasting legacy at this University through his magnificent rare books collection, his scholarship support for hundreds of students, and his extraordinary contributions to our music and humanities programs. We are grateful for his profound commitment to Princeton, and we are proud that his name will endure in so many ways on the campus he loved so dearly."

The impact of Scheide's generosity extends throughout the University. His contributions include:

• Housing the Scheide Library, his famed private collection of rare books and manuscripts, in Firestone Library;
• The Scheide Scholars program, which has enabled hundreds of students to attend the University;
• An endowed professorship, the Scheide Professor of Music History;
• Primary funding for the reconstruction of the Woolworth Center of Musical Studies, including the three-story Arthur Mendel Music Library;
• Funding for the construction of the Scheide Caldwell House, which provides offices and classrooms for several key humanities initiatives, including the programs in Hellenic studies, Judaic studies, European cultural studies, medieval studies and the ancient world, as well as the Committee for Canadian Studies and the Gauss Seminars;
• Several significant donations to Firestone's Department of Rare Books and Special Collections, among them a rich collection of European legal documents spanning the 11th to the 19th centuries; a pastel of John Milton, done from life; and an extremely rare first edition King James version of the Bible, published in London in 1611; and
• Support for the Princeton University Art Museum. 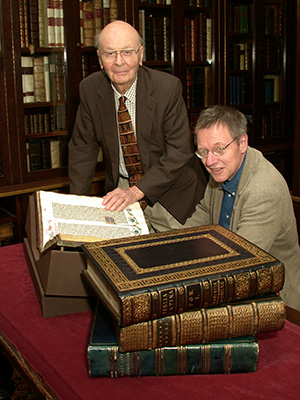 William Scheide, a 1936 alumnus, is remembered as a musician, bibliophile and philanthropist who, during his lifetime, created a "lasting legacy" at the University supporting the arts and humanities. Above, Scheide and Paul Needham, Scheide librarian, look over the world's first four printed Bibles, part of the collection of the Scheide Library. (Photo by Denise Applewhite, Office of Communications)

Born on Jan. 6, 1914, in Philadelphia, Scheide was the only child of John Hinsdale Scheide, an 1896 alumnus, and Harriet Hurd. He was raised in Titusville, Pennsylvania, in a musical family — his father played the piano and his mother, a social worker, was also a singer. His grandfather, William Taylor Scheide, and his father earned their fortune at Standard Oil, which they used, in part, to begin an extraordinary collection of rare books and manuscripts in their home.

Scheide began acquiring more books and documents for the collection in 1954, and arranged to have the contents of the library moved into an addition at Firestone Library that replicated the original room built by his father, replete with its original leaded-glass windows, furniture, statues and rugs.

Housed under glass and in tall elegant wooden bookcases, the collection includes such treasures as an early 14th-century manuscript of the Magna Carta; the first four Bibles ever printed; an original copy of the Declaration of Independence; Shakespeare's first, second, third and fourth folios; musical manuscripts of J.S. Bach, Beethoven, Mozart, Schubert and Wagner; and Emily Dickinson's recipe for chocolate pudding, dated Amherst, Massachusetts, 1872; among many others. New rarities have arrived regularly, as Scheide, with the advice and enthusiastic support of his wife, Judy McCartin Scheide, continued to build the collection. Its contents are consulted by Princeton students and scholars from around the world.

In a foreword to "Biblio," a 2004 book about the Scheide Library — photographed by Scheide's niece, Natasha D'Schommer — University Librarian Karin Trainer wrote: "In a world with few certainties, Bill's dedication to our common endeavor as custodians of the written word has been as comforting as it has been unflagging. His association with Princeton University Library has been a long and fruitful one."

An avid musician who started piano at the age of 6 and later learned the organ and oboe, Scheide majored in history at Princeton at a time when there was no music department. He earned his master's in music at Columbia University in 1940. A renowned Bach scholar, he founded and directed the Bach Aria Group in 1946, an ensemble that performed and recorded for 34 years.

Paul Lansky, the William Conant Shubael Professor of Music Emeritus, was chair of the Department of Music during the renovation of the Woolworth Center and the construction of the Mendel Library. "I was actually aware of Bill Scheide as early as 1958 when a doting aunt took me to the Bach Aria Group concerts in Town Hall [in New York City]. Arriving at Princeton nearly a decade later it was a great pleasure to meet the man," Lansky said. "He was a legend in his own lifetime and one of a kind. He will be missed." 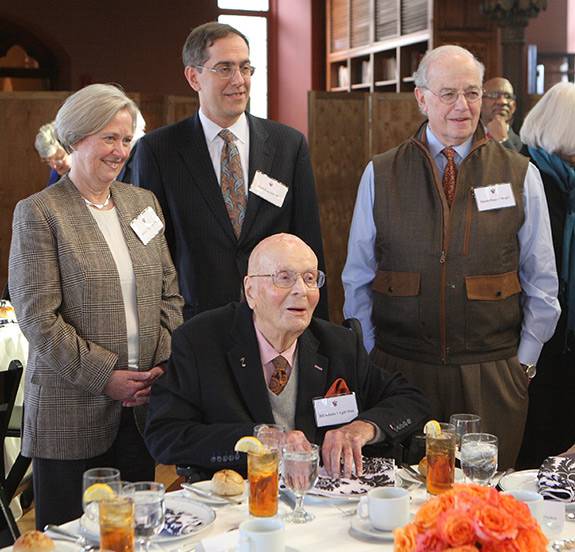 Scheide was as much cherished by the University community for his humility as for his generosity. "In 1997, everyone called the new library in the Woolworth Center the Scheide Music Library," said Scott Burnham, the Scheide Professor of Music History. "But with characteristic modesty, Bill soon insisted that we rename it the Mendel Music Library, after the great Bach scholar and Princeton music department legend, Arthur Mendel.

"I am endlessly grateful for Bill and Judy Scheide. What they have done for music at Princeton cannot be measured but only treasured. It is an honor and a joy to be associated with these pre-eminent friends of humanity," Burnham said.

Scheide held regular concerts in his Princeton home, inviting guest musicians or performing himself on his Bösendorfer piano and Holtkamp organ, over which hung a portrait of J. S. Bach, painted during the composer's lifetime. "I'll never forget listening to some of Bill's favorite moments from the Bach cantatas one afternoon in his home," Burnham said. "He took such pleasure in sharing the things he was passionate about!"

The University awarded Scheide an honorary doctorate of humanities in 1994, recognizing him as an "advocate, scholar, student, benefactor and friend."

Scheide's humanitarianism and philanthropy extended into the town of Princeton. For decades, area residents and the University community have enjoyed classical music concerts by some of the world's leading ensembles and orchestras, produced by Scheide Concerts. For the last seven years, an annual concert to celebrate Scheide's birthday has benefited community organizations such as the Princeton Public Library and the Arts Council of Princeton. "Ode to Joy," the concert celebrating his 100th birthday, featured the Westminster Symphonic Choir, the Vienna Chamber Orchestra and several soloists, and the program included a performance of "Prelude for Piano Four Hands," a piece Scheide wrote as an undergraduate.

He served as a trustee of and gave generously to the Princeton Theological Seminary and Westminster Choir College of Rider University, both of which have buildings bearing his name.

Scheide also carried on the commitment to social justice he had learned from his parents. In the early '50s, the future first African American Supreme Court Justice, Thurgood Marshall, then a lawyer from the National Association for the Advancement of Colored People's Legal Defense Fund (LDF), asked Scheide if he would support a case called Brown vs. Board of Education. Scheide became a leading funder of the landmark 1954 case that desegregated U.S. public schools. He served on the LDF board for 38 years.

"He set a sterling example of 'Princeton in the nation's service' through his courageous support of Thurgood Marshall's campaign to end segregation," Eisgruber said.

“As we reflect on the accomplishments and generosity of Bill Scheide, it is important to acknowledge as well the contribution of his wife, Judy, whose care, advice, and constant companionship enabled Bill to enjoy such a long and happy life," Trainer said. 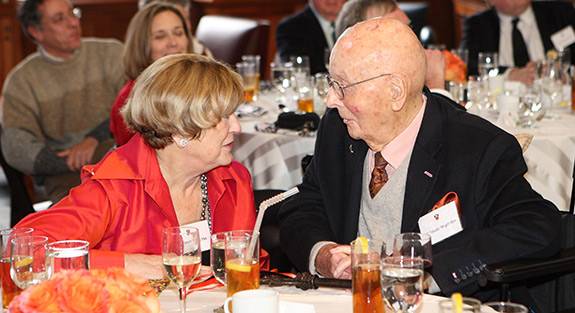 Scheide takes a moment amid the festivities of his 100th birthday party with his wife, Judy Scheide. (Photo by Kevin Birch)

In addition to his wife, Judy, Scheide is survived by his daughters Louise Marshall and Barbara Scheide, and his son John; three stepchildren, Carol Taylor, Mary Holmes and Kate McCartin, a 1984 alumna; and several grandchildren and great-grandchildren.

A memorial service will be held at 3:30 p.m. Saturday, Nov. 29, at Nassau Presbyterian Church, 61 Nassau St. The service will be simulcast in Richardson Auditorium, Alexander Hall.

Contributions may be made to Centurion Ministries, a Princeton-based nonprofit whose mission is to free from prison innocent individuals who were wrongly convicted and sentenced to either life or death; and Isles, a Trenton-based community development and environmental organization.