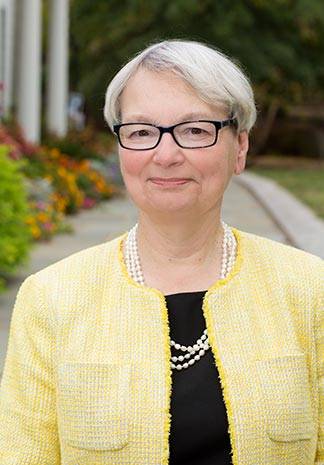 Karin Trainer, University librarian at Princeton University for 20 years who has overseen extensive growth in the library system, has announced plans to retire at the end of the academic year.

President Christopher L. Eisgruber has appointed Stephen Kotkin, the John P. Birkelund '52 Professor in History and International Affairs, to chair a committee to identify a successor to the position, with the expectation of having the new University librarian in place by July 1, 2016.

"Karin Trainer's legacy on this campus will be profound and enduring," Eisgruber said. "Her leadership and vision over the past two decades have enhanced Princeton's libraries tremendously: she has shaped their collections, improved their organization, cultivated their staffs, and overseen the design, construction and renovation of critical facilities. She has welcomed new media and preserved core strengths. Karin has been a fabulous University librarian, and her shoes will be hard to fill."

"What a privilege and pleasure it has been to spend these years at Princeton, on a campus that loves its libraries and is eager for them to thrive," Trainer said. "I don't know of another university where the students, faculty, staff, alumni and trustees are as united in their support for the library as I've found here. These have been tumultuous but exhilarating years for research libraries, and I'm exceedingly proud of our library staff's creativity and energy in introducing new research tools and services while continuing to strengthen the collections so important for teaching and research."

The Princeton University Library is housed in 10 buildings across campus and has more than 8 million printed volumes, 5 million manuscripts, 2 million nonprint items, and extensive collections of digital text, data and images.

"We are fortunate to have an extraordinary staff of 350 people, who bring specialized knowledge and deep commitment to the important work of the Princeton University Library," Trainer said.

Trainer, who worked as a librarian in the Catalog Department at the University's Firestone Library from 1972 to 1978 before returning to Princeton as University librarian in 1996, has overseen significant developments in the library system.

One of the most visible changes is the renovation of Firestone Library, a 12-year project that has just three more years to complete. "I have especially enjoyed my close collaboration with Karin on the Firestone Library renovation," Eisgruber said. "That project would not have happened without her patient and persistent advocacy, and she has guided us to a marvelous renovation that is beautiful, practical and faithful to the scholarly and educational values of this University."

The changes Trainer has overseen include the following:

• The library's print collections have grown by 50 percent over the last two decades, which Trainer notes "translates to about 43 miles of books, which is almost the distance between Princeton and New York Penn Station."

• The library's special collections have been steadily enriched, including additions of the Cotsen Children's Library; the papers of Toni Morrison; the archives of the Hudson Review; the papers of Helen Frankenthaler; the Milberg collections of Jewish American writers, Irish poetry, Irish theater and Irish prose; the library of Jacques Derrida; and the core of the Lapidus collection on Liberty and the American Revolution. "I've taken great satisfaction on seeing Princeton's special collections, which have always been strong, grow even stronger," Trainer said. "The donation of Bill Scheide's monumental library of rare books and manuscripts this year was a historic moment in the history of the library and the University."

• Digital collections have flourished, and the library currently devotes about half of its acquisitions budget to online reference tools and content.

• Free access to digital items from the library's collections grows daily. Princeton was an early partner in the Google Books Project, and has around 400,000 items digitally available from the general stacks collections. Staff members also are working full time to create high-quality digital images, particularly from holdings in the Department of Rare Books and Special Collections. The library also is home to the new Center for Digital Humanities directed by Associate Professor of English Meredith Martin. Working with the Office of Information Technology, the library is sharing the responsibility for implementing the faculty's policy on open access scholarly publishing.

• Popular services introduced by the library are BorrowDirect, which allows students and faculty to request books from Ivy League and certain other research libraries, and ArticleExpress, which provides rapid electronic delivery of book chapters and journal and newspaper articles to members of the University community.

A member of the president's cabinet, Trainer has served on several University committees during her tenure. She also is a trustee of Princeton University Press and of the Princeton Club Library in New York.

Among her professional associations, she was a board member of the Association of Research Libraries and undertook a number of committee assignments, many focusing on creating a diverse workforce for research libraries. In 2010, she arranged for Princeton to host the National Conference on Diversity in Libraries. She has served as a member of several reaccreditation panels for other Ivy League universities and is a longtime member of the Committee to Visit the Harvard University Library.

Previously, Trainer was associate university librarian at Yale University and director of technical and automated services at New York University.

In retirement, Trainer intends to remain in Princeton with her husband, Bill Stowe, Class of 1968.