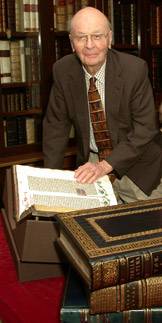 The late William H. Scheide, a member of the Class of 1936, has left his collection of rare books and manuscripts to Princeton. The Scheide Library includes such treasures as the world's first six printed editions of the Bible, four of which are shown in this 2002 photo with Scheide.

Musician, musicologist, bibliophile and philanthropist William H. Scheide, a 1936 Princeton University alumnus who died in November at age 100, has left his extraordinary collection of some 2,500 rare printed books and manuscripts to Princeton University. With an expected appraised value of nearly $300 million, it is the largest gift in the University's history.

The Scheide Library has been housed in Princeton's Firestone Library since 1959, when Scheide moved the collection from his hometown of Titusville, Pennsylvania. It holds the first six printed editions of the Bible, starting with the 1455 Gutenberg Bible, the earliest substantial European printed book; the original printing of the Declaration of Independence; Beethoven's autograph (in his own handwriting) music sketchbook for 1815-16, the only outside Europe; Shakespeare's first, second, third and fourth folios; significant autograph music manuscripts of Bach, Mozart, Beethoven, Schubert and Wagner; a lengthy autograph speech by Abraham Lincoln from 1856 on the problems of slavery; and Gen. Ulysses S. Grant's original letter and telegram copy books from the last weeks of the Civil War.

"Through Bill Scheide's generosity, one of the greatest collections of rare books and manuscripts in the world today will have a permanent home here," said Princeton President Christopher L. Eisgruber. "It will stand as a defining collection for Firestone Library and Princeton University. I cannot imagine a more marvelous collection to serve as the heart of our library. We are grateful for Bill Scheide's everlasting dedication to Princeton and his commitment to sharing his breathtaking collection with scholars and students for generations to come." 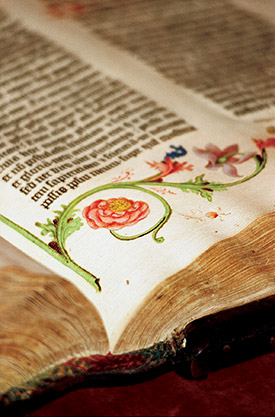 Vivid reds, pinks and greens of the illustrations run alongside the text in the Gutenberg Bible, the first printed Bible, which was produced in Mainz, Germany, in 1455. (Photo by Natasha D'Schommer)

Although privately owned, the collection has been accessible to patrons of the University's library through Firestone's Department of Rare Books and Special Collections.

"Bill's generosity was legendary," said University Librarian Karin Trainer. "He was likewise generous with his library." She said that the Scheide Library's "true value" is the support it provides for the University's academic programs.

"There are discoveries to be made in every document and volume in the library," she said. "This is a scholar's library; its contents were acquired because of their research value."

Anthony Grafton, a specialist in the cultural history of Renaissance Europe and Princeton's Henry Putnam University Professor of History, calls the library a "treasure house" for students and scholars.

"At its core, the Scheide Library is the richest collection anywhere of the first documents printed in 15th-century Europe," Grafton said. "But its magnificent books and manuscripts illuminate many areas, from the printing of the Bible to the ways in which the greatest composers created their music."

Scheide's grandfather, William Taylor Scheide, began the collection in 1865 at the age of 18. His son, John Hinsdale Scheide, a member of Princeton's Class of 1896 and, like his father, an oil company executive, added to the collection and built the library in Titusville.

John Scheide's son, William Hurd Scheide, started acquiring books and manuscripts for the collection in 1954. By then, he was living in Princeton, while the library remained in Titusville where his mother continued to reside after his father's death in 1942. A new chapter for the Scheide Library opened in 1959, when it was moved to Princeton following his mother's death.

The space created at Firestone for the collection includes furniture, statues, rugs and leaded-glass windowpanes from the Titusville room.

Trainer said that the library has been a cherished resource not only for students and senior scholars from around the world, but also the Princeton community. "Many local groups, such as the Princeton Adult School, have been invited to visit the Scheide Library to see and hear about its treasures," she said.

She listed some of the library's other important documents on American history that were of interest to visitors, including early travel accounts of voyages to the New World; a wide range of early Massachusetts printing; the legendarily rare "Journal" of Major George Washington from 1754, his first appearance in print; Paul Revere's "Bloody Massacre" engraving from March 1770; and the "Lexington Alarm," the earliest newsletter report of the Battle of Lexington from April 1775. 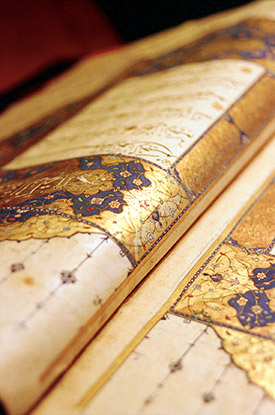 A detail of the ornate pages from a copy of the Quran from about 1700. (Photo by Natasha D'Schommer)

Scheide continued to build the collection until shortly before his death, often with the advice and support of his wife, Judy McCartin Scheide.

"This collection is the fulfillment of the dreams of three generations of Scheide book men," McCartin Scheide said. "Having it reside permanently at Princeton is a testament to the joy Bill took in sharing the books, papers, manuscripts, letters, music and posters with others — those were some of his happiest times. He loved showing people — especially young people who had never seen anything like this before — the collection, letting them touch the books and experience what he called 'the wow factor.'"

Trainer said that the Scheide Library will remain intact as a distinct collection.

"It will continue to be housed together, and no book or document will be removed from it," Trainer said. "We have gradually been digitizing selections from the Scheide collection, including the Gutenberg Bible, and making them available through the University's website. We intend to continue that work to share this incredible collection worldwide.

"As part of the major renovation now underway in Firestone Library, the Scheide Library will be relocated," she added. "Before his death, Bill reviewed the plans for the new space, which is once again intended to resemble his father's library. In designing the new space, the renovation architects relied on a vintage photograph they found of the Titusville library." 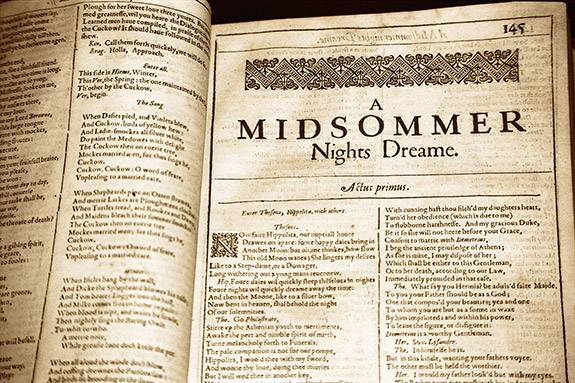 Scheide, who started playing piano at age 6 and became an avid musician, majored in history at Princeton at a time when there was no music department. He earned his master's in music at Columbia University in 1940 and founded the renowned Bach Aria Group, which performed and recorded for nearly 35 years under his direction. 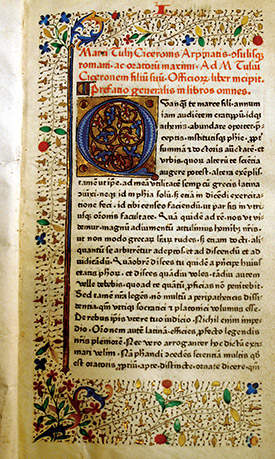 This illuminated copy of "De Officiis" (On Duties or On Obligations) was published in 1466 in Mainz, Germany. The Latin text was written in 44 B.C. by Marcus Tullius Cicero, who discussed his view of the best way to live, behave and observe moral obligations. (Photo by Natasha D'Schommer)

His contributions have had an impact on many areas of the University, including supporting the Scheide Scholars program, which has enabled hundreds of students to attend the University; creating the endowed Scheide Professor of Music History; providing primary funding for the reconstruction of the Woolworth Center of Musical Studies, including the three-story Arthur Mendel Music Library; funding the construction of the Scheide Caldwell House, which provides offices and classrooms for key humanities initiatives; making significant donations to Firestone's Department of Rare Books and Special Collections; and supporting the Princeton University Art Museum.

Princeton awarded Scheide an honorary doctorate of humanities in 1994, recognizing him as an "advocate, scholar, student, benefactor and friend."

His humanitarianism and philanthropy extend beyond the campus. For decades, area residents and the University community enjoyed classical music concerts by some of the world's leading ensembles and orchestras, produced by Scheide Concerts. An annual concert to celebrate his birthday benefited community organizations such as the Princeton Public Library and the Arts Council of Princeton. He served as a trustee of and gave generously to the Princeton Theological Seminary and Westminster Choir College of Rider University, both of which have buildings bearing his name.

Scheide's interests also focused on civil rights. In the early '50s, the future first African American Supreme Court Justice, Thurgood Marshall, then a lawyer from the National Association for the Advancement of Colored People's Legal Defense Fund, asked Scheide if he would support a case called Brown v. Board of Education. Scheide became a leading funder of the landmark 1954 case that desegregated U.S. public schools. He served on the fund's board for 38 years. 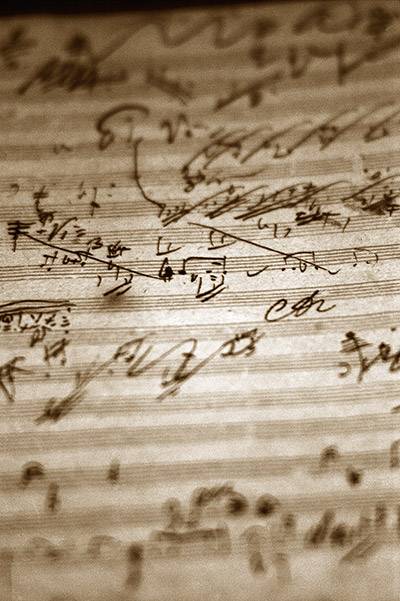 This sketchbook used by Ludwig van Beethoven is believed to be from 1815 and is the only notebook of this composer in a library in the United States. (Photo by Natasha D'Schommer) 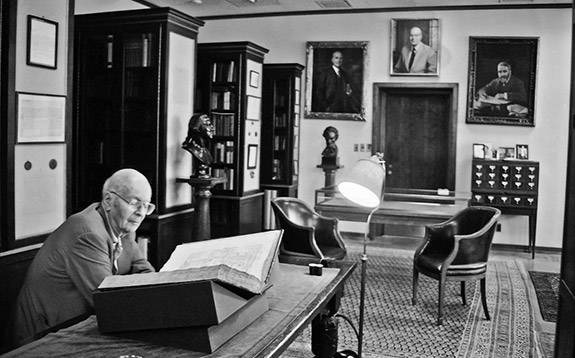 William Scheide reads in the Scheide Library. This space created at Princeton's Firestone Library includes furniture, statues, rugs and leaded-glass windowpanes from the original library built by his father in Titusville, Pennsylvania. (Photo by Natasha D'Schommer)