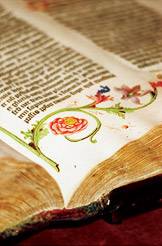 Among the treasures of the Scheide Library showcased in "Biblio," a new book by photographer Natasha D'Schommer, is the Gutenberg Bible. Her close-up photographs capture the still-vivid reds, pinks and greens of the illustrations that run alongside the text in the first printed Bible, which was produced in Mainz, Germany, in 1455. 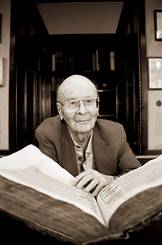 The library is privately owned by Princeton resident and 1936 alumnus William Scheide, who moved his collection to Firestone Library in 1959. 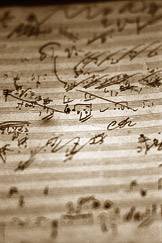 This sketchbook used by Ludwig van Beethoven is believed to be from 1815 and is the only notebook of this composer in a library in the United States.

This illuminated copy of "De Officiis" (On Duties or On Obligations) was published in 1466 in Mainz, Germany. The Latin text was written in 44 B.C. by Marcus Tullius Cicero, who discussed his view of the best way to live, behave and observe moral obligations.

A new book, "Biblio" by photographer Natasha D'Schommer, offers a rare close-up look at many of the exceptional books and manuscripts that belong to the Scheide Library, one of the most significant private book collections in the United States, which is housed in Princeton's Firestone Library.

• "Biblio" has more than 120 photographs of rare books, manuscripts and musical scores from the library, which is one of six libraries in the world — and the only one outside Europe — to possess original copies of all of the first four printed Bibles.

• Close-up photographs in "Biblio" capture the still-vivid reds, pinks and greens of the illustrations that run alongside the text in the Gutenberg Bible. Produced in Mainz, Germany, in 1455, it is the first printed Bible.

• The book also contains several photographs of pages from a sketchbook used by Ludwig van Beethoven. The composer kept a series of notebooks as an archive of musical ideas. The notebook in the Scheide Library is believed to be from 1815 and encompasses complete and incomplete works, including a sketch related to the Ninth Symphony. It is the only Beethoven notebook in a library in the United States.

• Also captured in "Biblio" are images of the Blickling Homilies, written in Old English on parchment in the late 10th or early 11th century. The manuscript, which consists of 18 anonymous homilies, is the only substantial Old English manuscript that exists in the United States.

• The Scheide Library is privately owned by Princeton resident and 1936 alumnus William Scheide, who moved his collection to Firestone Library in 1959. The collection draws scholars to campus from around the globe and is available to qualified researchers.

Publication of "Biblio" was coordinated by the University's Office of Communications. The book is available from local and online booksellers. 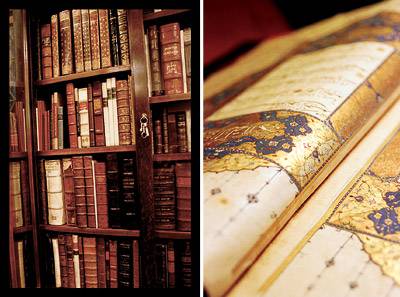 "Biblio" has more than 120 photographs of rare books, manuscripts and musical scores from the library, including the image at right of the ornate pages from a copy of the Koran from about 1700.