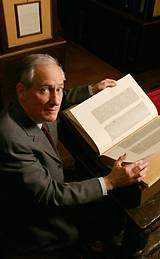 Robert Darnton, shown here in the Scheide Library, says the importance of books comes not only from their inherent value but from the answers they provide to historical questions.

When Robert Darnton plucks a 200-year-old book off the shelf in his office, he is not reverential. He does not put on gloves. He does not hold the book gingerly. He picks it up and flips through the frayed pages as though the tome, published in 1776, is last year’s bestseller.

But when the history professor talks about what can be gleaned from studying old books, he is full of awe.

“You can learn a great deal just by holding the book in your hands,” said Darnton, who is the director of Princeton’s Center for the Study of Books and Media.

The book he has on the shelf, “Anecdotes sur Mme la comtesse du Barry,” is the equivalent of a paperback biography of a celebrity published today. Written in French, it is an anonymous account of the scandalous background of King Louis XV’s mistress.

“Look at this miserable paper — if you hold it to the light, you can see bits of old shirts or petticoats that weren’t ground down from the rags thoroughly,” he points out. “Looking at the poor quality of the paper tells you the market that the publisher was aiming at — a general public of ordinary, non-affluent readers rather than the wealthy elite. When students hold the actual book, they can travel to another world in their minds.”

The Center for the Study of Books and Media, established at Princeton in 2002, promotes the understanding of the printed word as a force in history. Through seminars, conferences and an exchange program with Oxford University, the center gives students the opportunity to study everything from 15th-century Bibles to current marketing strategies in book publishing.

Darnton, one of the founders of the field of the history of books, is the center’s impassioned guide.

The study of this field — the history of books or the history of the book, as it is sometimes called — is booming. Since the field was recognized as a discipline two decades ago, numerous research centers, university programs, scholarly journals and conferences dedicated to the topic have been established. The subject’s appeal is due in part to the fact that it encompasses so many different disciplines, Darnton said.

The center is dedicated to the study of the printed word in all its forms, including newspapers, pamphlets and books before the invention of printing, as well as other media, although it has not yet sponsored studies of television and the Internet. It also encompasses the study of printing, publishing and reading. Currently the center specializes in the Western world from the Middle Ages to the modern era because that is where Princeton’s strength lies. Besides Darnton, the two professors who teach graduate courses sponsored by the center are Anthony Grafton, the Henry Putnam University Professor of History, and Professor of English Nigel Smith.

The ascendancy of the field owes a great deal to Darnton.

“He’s the main person in the United States who has led the creation of this field as a discipline,” said Adrian Johns, associate professor of history at the University of Chicago, who spoke at the center’s conference last December on “The History of Books and Intellectual History.” “It’s a sign of how far the field has come — and his own status within the field — that he was able to get so many intellectual stars to attend the center’s conference.”

Darnton, who is the Shelby Cullom Davis ’30 Professor of European History and an expert on early modern France, is an ambassador for the field of the history of books. He has traveled all over the world — from Munich to Mexico, Paris to Peru — giving lectures on the topic. Darnton’s work in book history has been recognized by the International Gutenberg Society, which awarded him the Gutenberg Prize last year, and by the American Printing History Association, which gave Darnton its 2005 award for distinguished achievement and said he “has added a whole new dimension to the study of the history of the book in Europe.”

Darnton has written books on topics ranging from “The Great Cat Massacre and Other Episodes in French Cultural History” to “Berlin Journal, 1989-1990,” a record of his sabbatical in Berlin during the momentous changes that led to the reunification of Germany. He currently is working on a book about the literature of slander in 18th-century France and England. “The subject hasn’t been actively explored, and it provides a different way to understand public opinion and politics,” he said.

His scholarship in the last several years also has focused on the diffusion of books — how they were distributed and who bought them.

“We don’t know the literary diet of most people in the past,” he said. “Were they reading Shakespeare? Did they see his plays? Did they read Voltaire and Rousseau? Many books and authors that were bestsellers in their time have since been totally forgotten.”

Darnton spent years studying the correspondence of booksellers and publishers to create a retrospective bestseller list. It was published in his book “The Forbidden Best-sellers of Pre-Revolutionary France,” which won the National Book Critics Circle Award for criticism in 1995.

Darnton’s work may start with an analysis of book distribution, but it ends up leading historians to rethink their conclusions about far broader topics, Johns said.

“He talks about the French Revolution as an uprising of discontented hack writers — they hoped to get literary patronage but couldn’t, so they became subversive journalists,” Johns said. “Darnton starts with the history of books, but when he’s done he’s gotten much further.”

From Gutenberg to the Internet

Darnton has brought the excitement of studying this field to the classroom through a course in humanistic studies called “The Book From Gutenberg to the Internet.” He takes undergraduates through the entire history of the book, stopping along the way to teach them how to set type and correct proofs using the same techniques that prevailed in printing shops 300 years ago. He also takes them to the Princeton University Press, where they learn how to edit copy, design pages and dust jackets, write notices for catalogs, and develop sales and marketing strategies.

Darnton starts the course by making use of one of Princeton’s richest resources for the study of this field: the Scheide Library, which is housed in Firestone Library and is considered the finest private library in the United States. When students touch the circa 1455 Gutenberg Bible, “you can see tremors of excitement,” Darnton said. “The point is not to present these books as jewels in some great treasure chest, but as historical documents that provide answers to important questions — questions you can’t answer unless you have the actual books.”

Firestone Library also has the archives of several publishing companies, the private papers of authors and booksellers and a paper collection that goes back to antiquity.

To increase the opportunities for Princeton students to have access to resources in this field beyond the campus, Darnton has fostered links through the Center for the Study of Books and Media with several other universities that have strong programs. An annual conference at Princeton sponsored by the center brings together graduate students from Rutgers, Columbia and Drew universities and the University of Pennsylvania to exchange ideas and get to know one another.

And Princeton students have the opportunity to study the history of books at Oxford University as part of the Oxford-Princeton Partnership, an exchange program that started in 2001.

“This is a fabulous opportunity for our students because Oxford has some extremely rare books — it was buying books before movable type was invented,” said Darnton, who has spent several years at Oxford as a visiting professor. Oxford also has significant strength in departments related to the field, such as analytical bibliography, paleography and the history of libraries, from which Princeton students can benefit. Oxford and Princeton also hold a joint conference on the history of books once a year.

To further take advantage of Oxford’s resources, Darnton has proposed a joint Oxford-Princeton graduate degree in the history of books in which students would spend at least a year studying at each University.