When 1936 Princeton alumnus William Scheide was born on Jan. 6, 1914, Woodrow Wilson had stepped down as president of the University and was president of the United States; Henry Ford had just introduced an assembly line to build the Model T; and workers in Washington, D.C., were placing the first stones in the Lincoln Memorial.

A century later, some of Scheide's many friends and admirers gathered in Chancellor Green at Princeton to celebrate the 100th birthday of the musician, philanthropist and bibliophile. President Christopher L. Eisgruber thanked Scheide for "being such a good friend to all of us" and presented him with a key to Nassau Hall, "an honor reserved for those Princetonians whom we hold in the highest possible regard." The event, featured in this video, also included remarks by University Librarian Karin Trainer, a performance by the Glee Club and a rousing Princeton "locomotive" cheer in honor of the centenarian.

A love of learning and the arts

Scheide's contributions to music and scholarship include founding the renowned Bach Aria Group, which performed and recorded for nearly 35 years under his direction. His love of books inspired him to spend countless hours enhancing the Scheide Library, a collection of rare books established by his grandfather, William Scheide, and expanded by his father, John Scheide of the Class of 1896. Housed in Firestone Library, the Scheide Library serves as a resource for scholars, historians, musicologists and bibliophiles from around the world, and is occasionally opened for tours by members of the community. 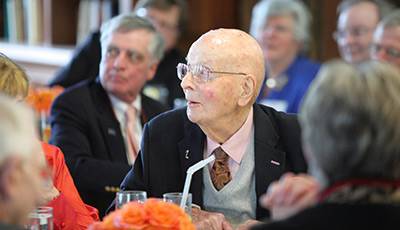 William Scheide, a member of Princeton's Class of 1936, turned 100 on Jan. 6. The musician, philanthropist and bibliophile was honored during a luncheon in Chancellor Green for his enduring support of the University. (Photo by Kevin Birch for Development Communications)

Scheide was responsible for what The New York Times called, in 2002, "a bibliographic convergence that has not occurred in more than 150 years" when he gathered together copies of the first four printed editions of the Bible — including the famed Gutenberg — in his library. Only two other individuals, King George III and the second Earl Spencer, have ever accomplished this feat. Those Bibles are in good company, surrounded by treasures that include — to name just a very few — an early 14th-century manuscript of the Magna Carta, an original copy of the Declaration of Independence, Beethoven's autograph sketchbook, Shakespeare's first, second, third and fourth folios, and musical manuscripts of J.S. Bach, Beethoven, Schubert and many others. 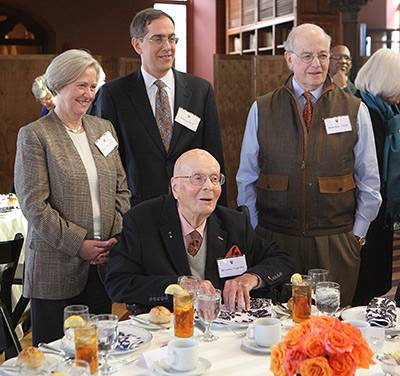 Renowned for his generosity and humanitarianism, Scheide has been a strong supporter of the University. Hundreds of young men and women have attended the University as Scheide Scholars. He endowed a professorship, now held by Scott Burnham, the Scheide Professor of Music History, and made possible the construction of the Arthur Mendel Music Library, named in honor of the late Princeton professor, in the Woolworth Center of Musical Studies.

His philanthropy extends well beyond campus, and has benefited numerous community and national initiatives and organizations. A passionate proponent of civil rights, he provided essential support to the NAACP in the case of Brown v. Board of Education, which ultimately desegregated the nation's public schools.

In 1994, the University awarded him an honorary degree in the humanities, recognizing him as an "advocate, scholar, student, benefactor and friend." 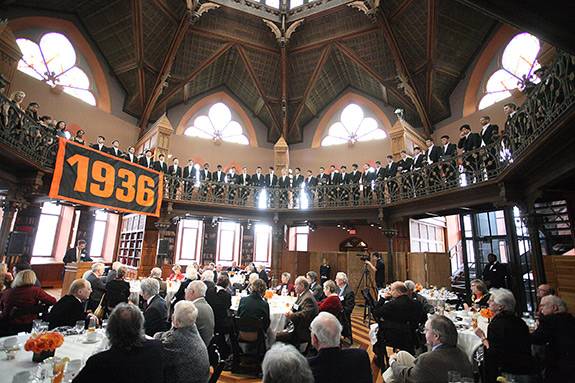