Through the Global Seminars program offered by the Princeton Institute for International and Regional Studies, 73 Princeton undergraduates traveled abroad this summer to learn about international issues by living in the country and city at the heart of the subjects they studied. The seminars included excursions to historical sites, including a visit to the ancient Hagia Sophia cathedral in Istanbul (above) as part of a course on the history of Turkey.

From performance styles in Ireland and Japan to political and social evolutions in Turkey, Italy, Poland and Germany, dozens of Princeton students received a firsthand education about an array of international issues this summer.

Through five Global Seminars offered by the Princeton Institute for International and Regional Studies (PIIRS), 73 Princeton undergraduates traveled abroad to live and learn in the country and city at the heart of each seminar's subject matter. Each seminar, held over six weeks in June and July, was led by Princeton faculty, with guest lectures and seminars by instructors from the host university and other local institutions. In addition to seminar discussions, students participated in language classes, excursions to sites and other activities relevant to the course, and community service projects. 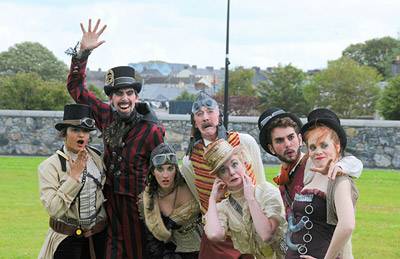 The Macnas theatrical group selected some Princeton students from the Global Seminar in Ireland to join the troupe for a street performance during the Galway International Arts Festival. The participating students, shown with their fellow performers during a dress rehearsal, are Sejal Pachisia (far left), Holly Linneman (third from left) and Mark Watter (second from right). (Photo by Declan Furey)

Since the program was launched in 2007 by PIIRS in collaboration with the Office of International Programs, more than 275 students have taken part in Global Seminars in Africa, East Asia, South Asia, Europe, the Near East and South America. Participating students earn credits for one University course.

The following are snapshots of this year's seminars.

Title: "Performing Irishness: Performance and Theater in Modern and Contemporary Ireland" (co-sponsored by the Lewis Center for the Arts) 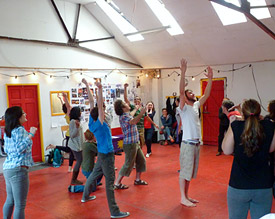 Students in the Global Seminar in Ireland participate in a workshop led by members of the local Macnas performance group. (Photo by Jill Dolan)

Description: Students learned about Irish performance theory, participated in theater workshops, read early 20th-century drama and attended numerous live performances. They traveled to the Aran Islands on Ireland's west coast and visited the Synge Irish Drama Summer School in Rathdrum, County Wicklow, to work with leading Irish theater scholars and practitioners. Participants also attended the Galway International Arts Festival to experience a variety of performance styles and meet artists from all over the world, and to join the Macnas theatrical group for a street performance.

Student highlights: "I loved getting to meet (playwright) Enda Walsh and (actor) Cillian Murphy," said rising junior Jennifer Siegel. "It was so amazing to actually talk with these renowned artists, and I really was in awe of all the great work being done in Ireland. Also, seeing Cillian Murphy perform on stage was so different from my expectations (since I have always seen him as a Hollywood actor), and yet his passion and talent for theater was quite inspiring."

"Traveling to the Aran Islands gave us a fascinating glimpse of rural Ireland in one of its most beautiful locations," added rising senior Julia Keimach. "The Synge Summer School was the first opportunity for many of us to attend an academic conference and in one of the most lush and beautiful counties in Ireland. In addition, we had a rare and wonderful opportunity to participate in the Macnas Parade as performers. … Being able to perform and be completely submerged in Irish arts and culture has been one of the most rewarding opportunities I've had."

Title: "Performance and Practice in Kyoto" (co-sponsored by the Program in East Asian Studies) 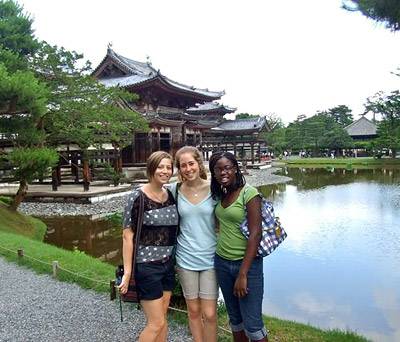 From left, Princeton students Alice Fuller, Zoe Billington and Adoley Ammah-Tagoe pause outside Phoenix Hall of Byodo-in, a Buddhist temple in Kyoto, Japan, as part of a Global Seminar that explored the links between Zen practice and monastic life and the Japanese arts. (Photo by Zoe Billington)

Description: The seminar explored the links between Zen practice and monastic life and the Japanese arts. Participants studied Japanese history, East Asian writing systems and Buddhism, as well as art forms including ink painting, noh drama, shakuhachi performance, tea ceremonies and poetry. The seminar included excursions to the Kenninji, Nanzenji and Daitokuji temples, which are foundational sites to the study of Zen institutions in Kyoto, and to historical sites in the city of Kamakura, which was once Japan's political center.

Student highlights: "Many of my classmates and I commented on how exciting it was to learn the background behind a famous temple in the morning, then visit the site in the afternoon. It provided a context for learning that was incredibly unique," said rising sophomore Adoley Ammah-Tagoe. "Our extracurricular excursions were fantastic as well, namely our weekend visit to Kamakura and the Hakone onsen (hot springs). Though I was surprised by my first taste of sashimi (fresh raw fish), the traditional meals were nothing less than exquisite, and the entire experience of wearing yukata (traditional Japanese robes) and eating while sitting on tatami (floor mats in Japanese-style homes) was thrilling."

Title: "Islam, Empire and Modernity: Turkey From the Caliphs to the 21st Century" (co-sponsored by the Program in Near Eastern Studies)

Description: The seminar provided an overview of the history, culture, language and literature of Turkey, from ancient times to the present. Emphasis was placed on the role of Turkey -- and Istanbul, in particular -- as a bridge between cultures, continents and religions. In addition to seminar discussions on various aspects of Turkish culture and society, students were encouraged to explore Istanbul and to treat the city itself as a classroom. Historic sites visited by the students included the ancient Hagia Sophia cathedral in Istanbul and the Sumela Monastery outside Trabzon along the Black Sea.

Student highlights: "One resounding lesson is the importance of understanding and seeing the cultural and historical aspect of conflicts in person to fully understand them," said rising sophomore Thomas Senecal. "Istanbul really is a city at the crossroads, and I was surprised to see the still-present conflict between Western-style cultural liberalism and Islamic conservatism in many parts of the city. This conflict could not have been properly understood purely from a textbook or a photograph -- living in it has really shown me the full expanse of the conflict."

Seminar leaders: Mitchell Duneier, the Maurice P. During Professor of Sociology, and Alice Goffman, a Princeton graduate alumna and assistant professor of sociology at the University of Wisconsin-Madison 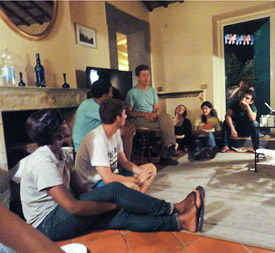 Princeton sociologist Mitchell Duneier (center) leads a dinner discussion with students in his Global Seminar on "The Global Ghetto," which took place in Italy and Poland. The seminar explored the evolution of the ghetto in world history. (Photo by Ewon Balk)

Description: The seminar traced the birth and spread of the ghetto as a social form and as an idea throughout world history, beginning with an early Jewish residential zone in Rome and ending with contemporary Muslim neighborhoods in the Paris suburbs. Participants also studied modern Jewish ghettos of Frankfurt, Prague and Venice; Nazi-controlled ghettos in Poland during World War II; Jewish immigrant ghettos of early 20th-century New York and Chicago; and black ghettos in northern U.S. cities from World War II to the present. Historical readings were augmented by visits to former ghetto apartments, synagogues, streets and markets.

Student highlights: "I wanted to take this class because I am interested in urban policy issues surrounding the contemporary ghetto, and I was interested to see how the concept of ghettos has changed and evolved over time," said rising junior Emma Fernandez. "Many of my favorite moments of the trip were the opportunities for informal exploration of the cities we visited." Fernandez also cited cultural excursions during the seminar, including "touring the Vatican in Rome, climbing the Duomo cathedral in Florence and riding on a gondola in Venice."

Title: "Memory, Democracy and Public Culture: Berlin and its Pasts" 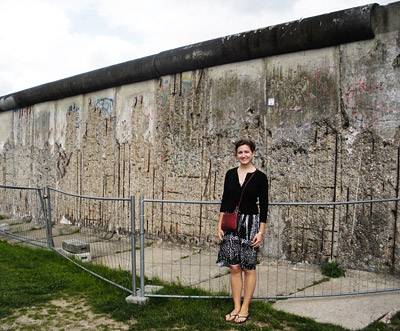 Natalie Scholl, a rising junior who participated in a Global Seminar on how Germany has dealt with its difficult political history, visits the Berlin Wall. (Photo by Christina Campodonico).

Description: Tackling the question of how Germany has dealt with its difficult political history, students read novels, examined films and architecture, and studied social-scientific literature, as well as historical and ethical readings on collective memory. The seminar featured guest lectures by activists, academics and politicians actively engaged with the question of how the past should influence the present. Excursions in and around Berlin included the Holocaust Memorial, the Jewish Museum and the Sachsenhausen concentration camp memorial.

Student highlights: "Being in Berlin has lifted everything off the page," said rising junior Christina Campodonico. "I'm an architecture major, but I don't always get to see the buildings I read about. Images and essays must guide my imagination. But to actually see and experience places, structures and sites of memory and history right in the heart of the city has been amazing, opening my eyes to the ways in which history, memory and politics play out in the urban landscape. I have learned that memory runs deep, penetrating many aspects of our society."

"From an academic standpoint I found the discussion of collective and cultural memory very provocative, especially in the context of Germany, which has had to cope with a very difficult past, and even more specifically Berlin, where history is still so fresh and tangible," added rising junior Natalie Scholl. "Beyond the intellectual excitement, however, I had a deep desire to go to Germany to explore and connect with my own German heritage. This seminar has proved very rewarding on both accounts, and I am grateful to Princeton for providing me with such a wonderful opportunity."