Princeton University scholar Bernard Lewis, one of the world's foremost historians of Islam and the Middle East, died May 19 in Voorhees Township, New Jersey. He was 101. 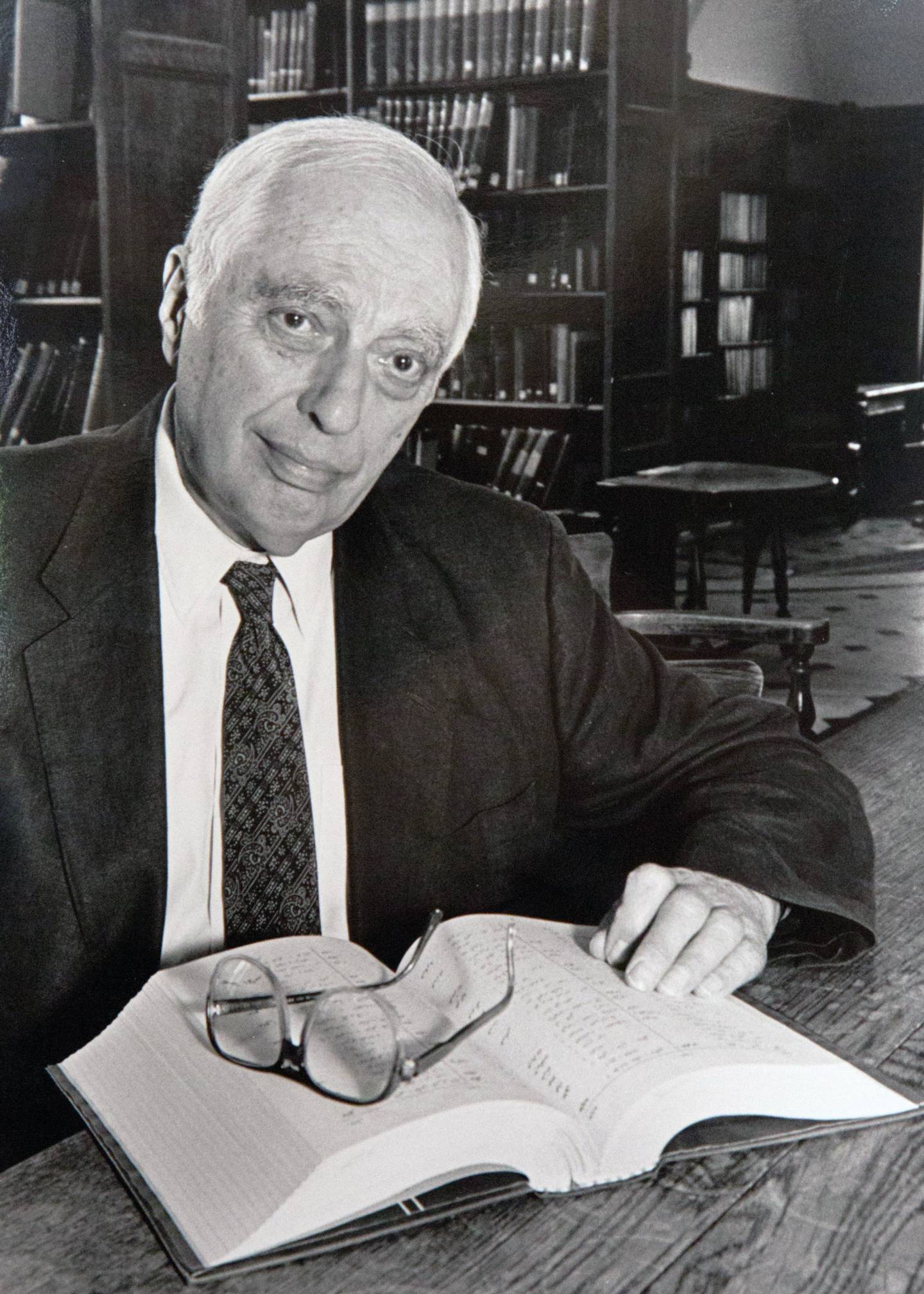 Lewis, the Cleveland E. Dodge Professor of Near Eastern Studies, Emeritus, was among the few scholars whose research encompassed the entire Islamic world, from the medieval to the contemporary. He studied Middle Eastern languages, religion and history, and also focused on the interaction between the West and Islam.

A prominent public intellectual, Lewis wrote many influential books, including: “The Arabs in History,” “The Middle East and West,” "The Crisis of Islam: Holy War and Unholy Terror," "What Went Wrong: The Clash Between Islam and Modernity in the Middle East," "The Middle East: A Brief History of the Last 2,000 Years," “The Emergence of Modern Turkey” and "Islam and the West.”

His research spanned classical Islamic history, Ottoman and Turkish history and modern Near Eastern studies. Lewis' work examined multiple aspects of the Islamic world, from its interactions with the West to the understanding of its modern dilemmas. He was among the first to study issues of race, slavery, class and the status of women in Middle Eastern history.

“He was certainly the most eminent and respected historian of the Arab world, of the Islamic world, of the Middle East and beyond,” said Abraham Udovitch, the Khedouri A. Zilkha Professor of Jewish Civilization in the Near East, Emeritus.

Lewis also was a member of the Institute for Advanced Study from 1974 to 1986. He transferred to emeritus status at Princeton in 1986 and the University presented him with an honorary doctorate in 2002.

“He was a conscientious teacher and very dedicated to his students,” Udovitch said. “His door was always open; any student could come in and he was extremely available to his colleagues. He taught graduate and undergraduate students, and mentored graduate students who are now scholars around the globe.”

Martin Kramer, a member of the Class of 1975 who earned his Ph.D. from Princeton in Near Eastern studies, called Lewis an inspirational teacher and mentor, and also a close friend. Kramer is chair of the Middle Eastern and Islamic Studies Department at Shalem College in Israel, and he also taught at Tel Aviv University for 25 years.

“I first met [Lewis] in the fall of 1976 when I returned to Princeton for graduate study,” Kramer said. “We all felt hugely privileged: in those days, his introductory books were read by undergraduates everywhere. To have the man himself as a teacher was an especially Princeton privilege.”

Kramer worked as a cataloguer for Lewis, who also served as his doctoral adviser.

“Professor Lewis had an encyclopedic knowledge of source materials, and an astonishing range of languages: Arabic, Turkish, Persian and Hebrew, and all the Romance languages, plus Danish and Russian,” Kramer recalled. “One thing I quickly learned is that it did not matter what language a source might be in. As one of his students, you were expected to access it and figure out what it said. So you found yourself plowing through dictionaries, trying to decipher languages you never properly studied, in order to read some article he flagged.”

It was during lunch conversations and walks in the Institute woods near campus that Kramer said he learned the most from Lewis: “It was there that he would map out the Middle Eastern field for me, with a mix of information, lore and gossip.”

Lewis came to Princeton after 25 years at the University of London, where he was a professor of the history of the Near and Middle East and head of the Department of History in the School of Oriental and African Studies. He became a U.S. citizen in 1982.

“He could be intimidating at first, and he had a measure of British reserve, but he adjusted fairly quickly to American informality,” Kramer said. “Although he drew the line at being called ‘Bernie.’”

Unlike many peers in the field, Lewis was able to move effortlessly from historical research and academic scholarship to punditry.

His penetrating insights and prolific writings helped ordinary citizens as well as powerful heads of state engage with the complexities of the Middle East. Throughout his career, Lewis was sought frequently by political leaders, academic institutions and news media for his perspectives on the Middle East and Islam.

“He was a monumental scholar and his historical research was authoritative. He believed that you really had to learn the languages and get to know a culture from the inside to understand it,” Udovitch said, recalling travels with Lewis in Turkey many years ago when they were invited to spend the afternoon with the country’s president “to talk politics, history and culture.”

While Lewis had a long lens on history, his later career delved into contemporary issues. He was known as an advocate for the development of democracy in the Middle East, and his scholarly works and public commentaries drew considerable attention after the Sept. 11, 2001, terrorist attacks and during U.S. military operations in Afghanistan and Iraq.

“During the last 25 years, he pronounced himself more frequently on issues related to [the] contemporary Middle East,” Udovitch said. “And, of course, when you do that you are never without controversy. But he was always taken very seriously because he was a brilliant scholar and had tremendous insight.”

“He has left us a shelf full of books that haven’t been superseded, that are models of deep research and elegant writing and that repay rereading,” Kramer said. “I teach an undergraduate course today based entirely on Lewis’ writings. The students are fascinated and even I learn something new each time.”

Lewis became fascinated by languages and history at an early age. While preparing for his bar mitzvah, the Jewish coming-of-age ceremony for boys, he discovered an interest in Hebrew. A bar mitzvah gift of a book on Jewish history stirred his interest in the field.

During his postsecondary education, Lewis studied law and considered becoming a British barrister, but returned to his first scholarly interest, Middle Eastern history — a choice, he wrote, that he never regretted.

While doing research in Turkey as a young historian, Lewis became the first Westerner permitted access to the archives of the Ottoman Empire in Istanbul and used the archival material extensively in his research, including his 1961 book "The Emergence of Modern Turkey."

During World War II, Lewis served in the British Army in the Royal Armoured Corps and Intelligence Corps from 1940 to 1941. From 1941 to 1945, he was attached to a department of the British Foreign Office. While Lewis' early interest was in medieval Islamic history, he said it was the war years that "awakened and nourished" his interest in the contemporary Middle East.

Lewis received academic honors from organizations worldwide, including: the 2006 National Humanities Medal for deepening the nation's understanding of and engagement with the humanities; the Harvey Prize from the Technion-Israel Institute of Technology for increasing awareness and understanding of Middle Eastern civilizations; and a 1973 citation of honor from the Turkish Ministry of Culture. He received honorary degrees from numerous institutions, including Hebrew University, the University of Pennsylvania and Brandeis University.

He was fellow of the British Academy, a member of the American Philosophical Society and the American Academy of Arts and Sciences, and was honored by several academic societies in the Middle East.

From 1986 to 1990, Lewis was director of the Annenberg Research Institute in Philadelphia, which is now the Herbert D. Katz Center for Advanced Judaic Studies at the University of Pennsylvania. More recently, Lewis was chairman of the Association for the Study of the Middle East and Africa, an academic society dedicated to promoting research and teaching in Middle Eastern and African studies.

In addition to his position on the faculty at Princeton, Lewis was a visiting professor and guest lecturer at institutions in the United States and across the globe, including Columbia University, the University of Chicago, College de France and Colegio de Mexico.

In his final book, “Notes on a Century,” published in 2012, Lewis reflected on his longevity, livelihood and luck. “When I look back over the ten decades of my life,” he wrote in the opening sentence, “I realize how extraordinarily fortunate I have been.”

View or share comments on a blog intended to honor Lewis’ life and legacy.