Princeton professor Mark Cohen studies the history of Jews living in Arab lands in the Middle Ages. But recently he has waded into controversial debates -- such as whether Islam is fundamentally anti-Semitic -- and forged a reputation as a voice of reason in a highly charged atmosphere. Throughout his career, Cohen has used rigorous research to explode commonly held myths regarding Jews, Muslims and Christians.

Princeton professor Mark Cohen has spent his 40-year academic career in a quiet corner of Jewish scholarship, studying the daily life of Jews who lived in the Muslim world 1,000 years ago. But in the decade since the Sept. 11 terrorist attacks, his once-obscure area of expertise has been catapulted into the limelight.

"As a medievalist, I never dreamed I would ever be involved in something with so much contemporary relevance," said Cohen, the Khedouri A. Zilkha Professor of Jewish Civilization in the Near East. "But I think I have something to say."

Cohen has waded into controversial debates -- such as whether the Muslim religion is fundamentally anti-Semitic -- and forged a reputation as a voice of reason in a highly charged atmosphere. Last year Merrimack College's Center for the Study of Jewish-Christian-Muslim Relations awarded him the first Goldziher Prize, which recognizes scholarship that promotes understanding across religious faiths. Throughout his career, Cohen has used rigorous research to offer insights into medieval history to scholars and students, and to explode commonly held myths regarding Jews, Muslims and Christians.

"Consistently over the decades he's stood for a very sane, balanced attitude on the position of Jews in the medieval Islamic world, and for careful scholarship based on documentary sources," said Michael Cook, Princeton's Class of 1943 University Professor of Near Eastern Studies. 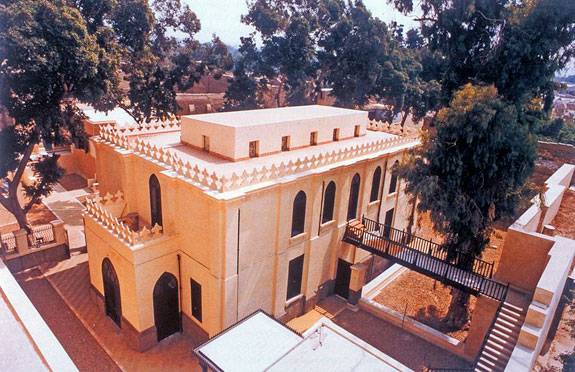 The Ben Ezra synagogue in Cairo, which recently was renovated, is where a trove of documents dealing with Jewish life in the Middle Ages was found in the 19th century. Cohen co-founded the groundbreaking Princeton Geniza Project, which has built a database of transcriptions of more than 4,000 of the documents, searchable in Arabic, English and Hebrew by keyword and available to scholars all over the world. (Photo courtesy of Mark Cohen)

Cohen first became interested in Middle Eastern studies in 1964, when he spent a year in England as a Fulbright Scholar at the School of Oriental and African Studies at the University of London. He later earned a Ph.D. and became an ordained rabbi, both at the Jewish Theological Seminary in New York, never intending to lead a congregation but instead to broaden his understanding of Jewish scholarship. He arrived at Princeton in 1973 as one of the few scholars in the world focusing on the history of Jews living in Arab lands in the Middle Ages.

Cohen's 1994 book, "Under Crescent and Cross: The Jews in the Middle Ages," broke ground by dispelling myths about the historical relationships between Jews, Muslims and Christians. The first in-depth study of its kind, the book meticulously compared how Jews fared when living in predominantly Muslim countries and predominantly Christian countries in the Middle Ages. Cohen tried to explain in new ways why Jews were treated oppressively in Northern Europe and ultimately expelled, whereas they fared much better in the lands of Islam.

André Aciman, a professor of comparative literature at the City University of New York who has written a memoir of his own life growing up in Egypt, wrote of the book, "Cohen's is a polemical text in the best sense of the word; it tries to open debate, not stifle it, and asks questions where they are traditionally shouted away." Aciman called the book "a reassuringly balanced and judicious assessment of Jewish life in the Middle Ages."

Cohen strove to be excruciatingly evenhanded in the book, he said. "I do not condemn, and I do not take sides. I talk about persecutions in the Islamic world as well as in the Christian world, and I do not cover up anything. The book was written against a stream of literature claiming that Islam was a persecutory religion, that it had treated Jews miserably and was in its origins anti-Semitic," he said.

The book has been translated into Arabic, French, German, Hebrew, Turkish and Romanian, with a Spanish version forthcoming.

This letter, from a cache of medieval documents found in a synagogue in Cairo, catalogs the inventory from an estate in Cairo during the Middle Ages. It is part of the Princeton Geniza Project co-founded by Cohen. (Image courtesy of the library of the Jewish Theological Seminary)

Another major scholarly project of Cohen's has helped illuminate the early relationship between Jews and Muslims. Cohen and his now-retired Princeton colleague Abraham Udovitch founded more than two decades ago a groundbreaking project in Jewish-Muslim studies: building a database that catalogs a unique cache of documents about daily life in Cairo's Jewish community during the medieval period.

The Princeton Geniza Project grew out of the discovery, in the late 19th century, of hundreds of thousands of documents from the Middle Ages that had been buried inside the walls of the Ben Ezra synagogue in Cairo. The term Geniza refers to the Jewish custom dictating that any document with the word God was to be buried so it could decompose naturally. In the dry Egyptian climate, the centuries-old texts were preserved. While the majority of the 300,000 documents were liturgical, rabbinic and other literary texts, some 15,000 were business contracts, letters, wills and other documents that dealt with everyday life.

"The Geniza documents tell us an enormous amount about Jewish commerce and commercial cooperation in the 11th, 12th and 13th centuries," Cohen said. "It's extremely important because it shows Jews living in a Muslim society as second-class subjects, but nonetheless interacting more or less easily with Muslim neighbors, not only in economic endeavors but in social settings."

Following the discovery, the synagogue's documents were dispersed and ended up in libraries all over the world. The Princeton Geniza Project, which was launched in 1986, has created a database of transcriptions of more than 4,000 of the documents, searchable in Arabic, English and Hebrew by keyword and available to scholars all over the world.

Sasson Somekh, professor emeritus of Arabic literature at Tel Aviv University, called Cohen one of "the foremost scholars on the Geniza, which has showed us how people lived in those remote centuries, what they did in their daily lives. We had a picture in black and white before the Geniza. Now we have it in Technicolor."

'My silence would be deafening'

Increased interest in the Islamic world since the terrorist attacks has meant more newspaper articles and blogs about Islam, with some writers promulgating the notion that anti-Semitism is rooted in core Islamic beliefs. As he saw this idea repeated in the media, Cohen felt he had to act.

"I decided that as an authority, if I didn't speak out more publicly, my silence would be deafening," he said.

His article "The New Muslim Anti-Semitism," which stated that Muslim anti-Semitism was a recent development, not a foundation of Islam, was published in the Jerusalem Post in January 2008. Pieces in The Washington Post, The Huffington Post and The Jewish Daily Forward followed, with several focusing on the controversy over the proposed Islamic center near Ground Zero in lower Manhattan.

"I saw the blatant abuse of history in the service of political ideologies on both sides of the fence," Cohen said. "There are readers out there who don't know much, and they're being exposed to points of view without solid historical basis. They hear that Islam is the new devil, and they believe what they hear. People are inclined to believe the worst about Islam. I just hope I can bring a little bit of balance to the discussion."

Wading into current debates about Islam "is very daring of him because he will always find people who don't like what he's saying," Somekh said. "But it's important that he do this."

Cohen's current emergence in the media is an "example of how a respected scholar of the medieval period can play an important role in enlightening public opinion on a policy issue that is being exploited by politicians and others," said Joseph Montville, who served as the chair of the jury that selected Cohen for the Goldziher Prize. Montville, a retired Middle East specialist in the American foreign service, added, "Mark is a meticulous scholar who is well respected. He does sober work that sober people can rely on." 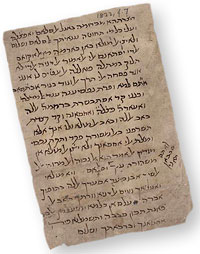 This letter from an aspiring businessman is one of the documents transcribed in the Princeton Geniza Project. (Image courtesy of the library of the Jewish Theological Seminary)

In the classroom, Cohen uses the Geniza documents and other historical materials to bring to life a long-ago period, and to relate that period to the contemporary world. Enrollments in Cohen's classes, which draw students from a wide variety of religious backgrounds, rose following Sept. 11.

Jessica Marglin, a graduate student in Near Eastern studies who is writing her dissertation on Jews in the Moroccan legal system in the 19th century, said one of the reasons she came to Princeton was to study with Cohen. She has taken Cohen's course "Readings in Judeo-Arabic," which introduces students to Arabic texts written by medieval Jews, especially documents from the Cairo Geniza.

"He knows how to make difficult texts accessible by building up to them slowly and making sure students have the foundational tools they need to move on to harder texts," Marglin said. "Even though I am not a medievalist myself, his comments are always incredibly helpful and his guidance invaluable in my work. His breadth is also quite impressive -- he knows so much about the modern period while being an expert on the medieval period."

In his undergraduate course "Jews, Muslims and Christians in the Middle Ages," students study primary-source documents to gain an understanding of the interrelationship of the three religions.

"I feel extremely privileged to have been able to take a course with Professor Cohen," said freshman Sheeba Arif. "Not only have I learned a great deal from him, but his class has also piqued my interest in Near Eastern studies and given me some insight into what Princeton really has to offer."

Coupled with his academic work and the recent emergence of his more public voice, Cohen says his work with students is rewarding because in most cases they come with little knowledge of Islam or Judaism. He enjoys introducing them to what would otherwise be a completely obscure period of history.

"After decades of teaching a subject that was purely historical, I now find I am talking about something that has distinct contemporary implications," Cohen said. "It makes my work more challenging, because there is always the risk of seeming to lean in one direction too strongly." 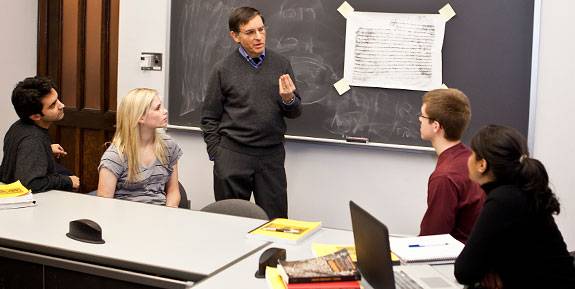 In his class on "Jews, Muslims and Christians in the Middle Ages," Cohen uses primary-source documents to help undergraduates gain an understanding of the interrelationship of the three religions. Cohen is joined by (from left) sophomore Ammar Ahmed, senior Hannah Rich, sophomore John Musick and freshman Sheeba Arif. (Photo by Brian Wilson)

Cohen plans to teach his undergraduate course twice more before retiring in 2013. "I hope my students will come away from the class with a sober understanding of the contentious issues that hover around the history of Jewish life in the medieval Islamic world," he said.

Accepting the Goldziher Prize at a ceremony last October, Cohen spoke of his hope that Jews and Muslims put aside their differences.

"In the dust of the conflict between Islam and the West today, Jews and Muslims have lost sight of the similarity between their two faiths," he said. If Jews and Muslims better understood the common ground they share, he said, that knowledge would "stem the tide of mutual fear that is today spreading across the globe."