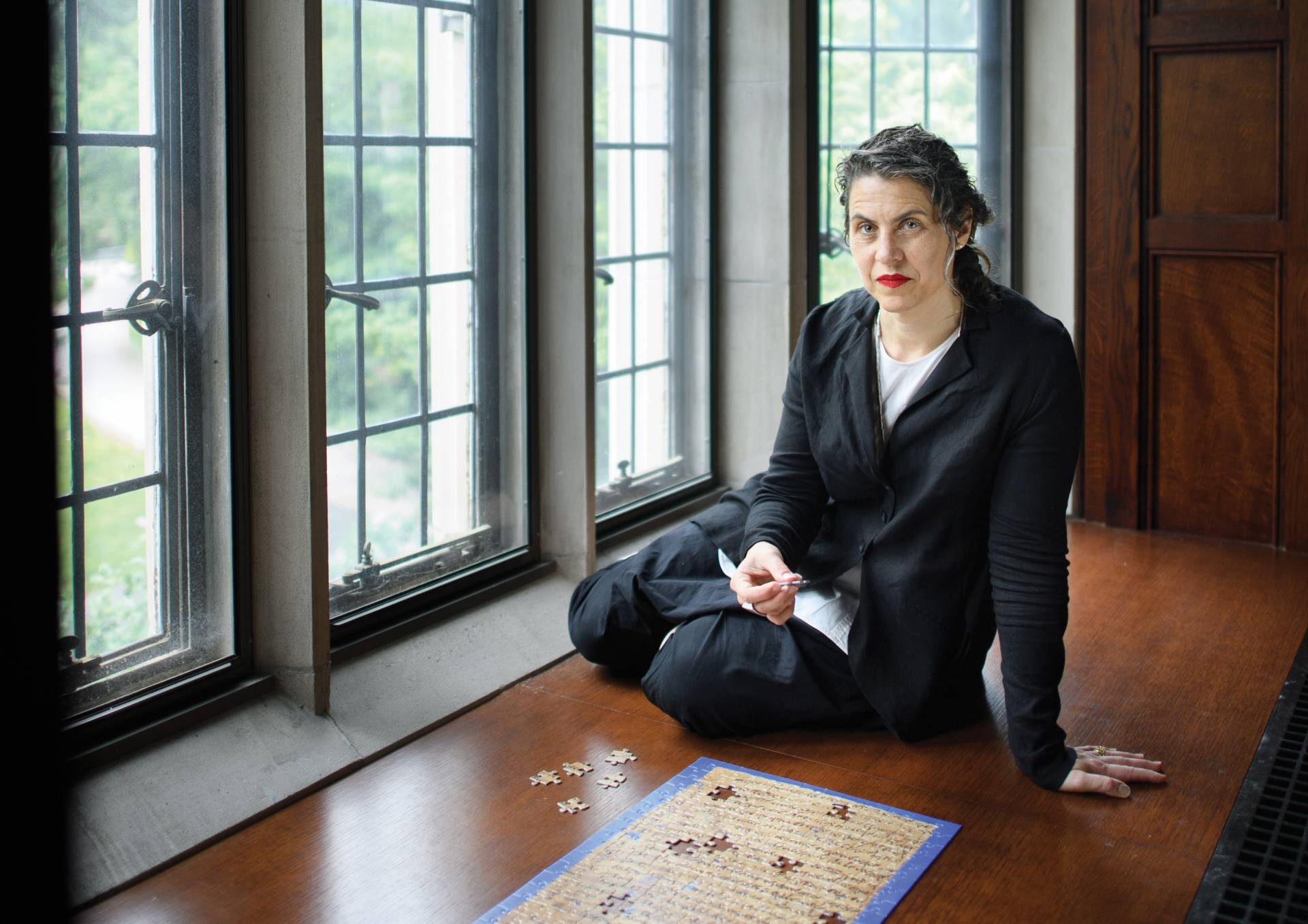 Marina Rustow, the Khedouri A. Zilkha Professor of Jewish Civilization in the Near East and a professor of Near Eastern studies and history, has centered her research on a unique cache of ancient documents, known as the Cairo Geniza, which offer insight into the everyday lives of Jews in medieval Egypt and beyond.

Imagine what the stuff of everyday life — personal letters, the deed of a house, a shop owner’s inventory records — might look like in medieval times. Since the late 1990s, historian Marina Rustow has immersed herself in a unique cache of such documents hidden away for centuries in an Egyptian synagogue.

This collection, known as the Cairo Geniza, comprises more than 400,000 fragments of legal documents, letters and literary materials, going back to about the year 870, that were consigned to a hiding place or storeroom (in Hebrew, “geniza”) in the medieval Ben Ezra Synagogue in the old city of Cairo.

In that era, damaged or worn-out religious texts and unneeded old documents could not be thrown away if they contained the name of God. In the mild Egyptian climate, the centuries-old texts were preserved. These items, which came to the attention of dealers and collectors in the 1890s, span more than a millennium and now reside in about 60 library and private collections around the world.

The Cairo Geniza is “a mirror of the society,” said Rustow, the Khedouri A. Zilkha Professor of Jewish Civilization in the Near East and a professor of Near Eastern studies and history. The documents offer insight into the everyday lives of Jews in medieval Egypt and beyond, much like the documentary papyri of Roman and Islamic Egypt, as well as Arabic paper documents of Egyptian Muslims and Christians during the Middle Ages.

“People had mainly been interested in what historians call literary texts — such as the Bible and Rabbinic literature,” Rustow said. “Nobody paid much attention to the other 10% of it, the documents.”

The last letter to noted Jewish philosopher Moses Maimonides from his brother David, a long-distance trader, written in Judeo-Arabic in 1170. David relates how he missed an ill-fated caravan from Cairo to Sudan in which the travelers were robbed and killed. David himself died on a sea voyage shortly thereafter.  (Fragments reproduced by kind permission of the Syndics of Cambridge University Library.)

That is, until 1948, when the scholar S.D. Goitein realized that there was a whole world to be discovered from the letters, marriage contracts, bills of sale, recipes, personal checks, descriptions of houses and real estate documents, said Rustow, who received a 2015 MacArthur Fellowship for her research on the Geniza texts. She uses Goitein’s five-volume work, "A Mediterranean Society: The Jewish Communities of the Arab World as Portrayed in the Documents of the Cairo Geniza," when teaching classes.

Since 1985, the Department of Near Eastern Studies has been the home of the Princeton Geniza Lab — a collaborative space devoted to making the documents accessible to the scholarly world and the general public. Rustow heads the lab, which hosts a searchable database of Geniza texts transcribed from the originals.

Since coming to Princeton in 2015, Rustow has expanded her collaboration with Cairo Geniza scholars around the world, while bringing graduate and undergraduate students — both in the classroom and through independent work — into this fascinating world.

By her own admission, Rustow, a native of New York City, came to history “very, very late.” History was her worst subject in high school, where she focused on accelerated math and science classes. She earned a bachelor’s degree in literature from Yale University, and didn’t take a single history class.

Her early love of language, however, foreshadowed what would become a scholarly focus that requires multiple languages. At Nightingale-Bamford, the all-girls’ school in Manhattan she attended before high school, she began studying Latin in sixth grade. “Latin taught me a certain kind of rigor about textual sources and never to trust your memory about what a word might mean because there are so many nuances,” Rustow said.

Between college and graduate school, she worked as an editor and journalist in San Francisco. Three thousand miles from the Upper West Side of her childhood — “in those days, the epicenter of Jewishness but not necessarily of Judaism” — she realized that if she had any questions about Judaism, she would have to answer them herself. She moved to Jerusalem for two years, where she learned Hebrew.

When it came time to apply to graduate school, Rustow intended to study English literature. “Once I actually started looking into programs, I realized all I wanted to study was Rabbinic literature,” Rustow said. In 1994, she entered Columbia University to study with David Weiss Halivni, one of the pioneers in dissecting Rabbinic texts to discover how they had come into being chronologically. In her fourth semester, her trajectory changed again, this time toward history, when she took a seminar with Yosef Hayim Yerushalmi, a leading scholar in using Rabbinic literature to write history.

“I am forever grateful to him because he knew that I was a historian before I did,” Rustow said. 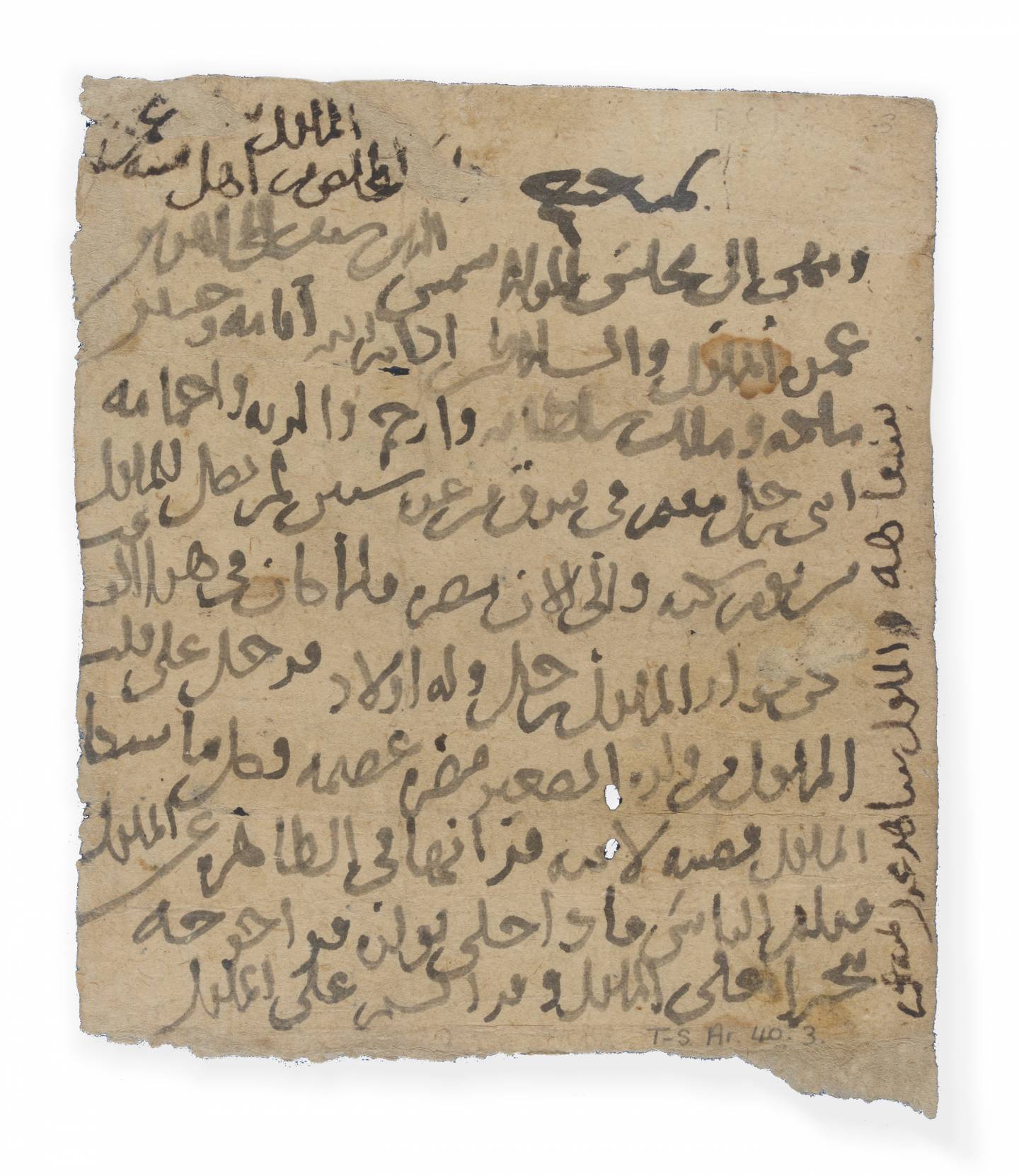 A petition to an Egyptian sultan complaining about the unruly son of a neighbor dates from the 12th-13th century. The boy harassed the petitioner’s family and bit his wife to the point of injury.

With Yerushalmi’s guidance, Rustow became that student. She began studying Arabic, and deep-diving into the Cairo Geniza. “I was hooked,” she said.

Apart from medieval manuscript fragments, Rustow is interested in the classical musical traditions of the Middle East, especially theory and performance practice in the Arab, Ottoman, Persian, Andalusi and Iraqi traditions. She plays oud, buzuq and classical piano.

Amidst thousands of paper fragments, Rustow has uncovered myriad examples of medieval life that are remarkably similar to modern times. She likes to tell the story of what she describes as metal take-out containers. “They appear in things like merchants’ inventories or dowry lists for marriage contracts,” she said. By studying the urban architecture of the period, she knew that most people didn’t cook at home.

“Essentially, people got their warm food in the bazaar,” she said. “Just as the city of Cairo today is the epicenter of food delivery — because of the dust, diesel fumes and traffic, everybody gets things delivered — people in the 11th century went to the market to get their hot food or ‘fast food.’”

The documents also reveal a social history that’s not so different from family life today. For example, a letter from a father to his daughter reflects “divorced parents taking digs at each other and guilt-tripping their kid, putting her in the middle — and yet this is happening in scribal handwriting,” Rustow said. “It’s a familiar and unfamiliar society at the same time and that’s what’s so addictive about it.” 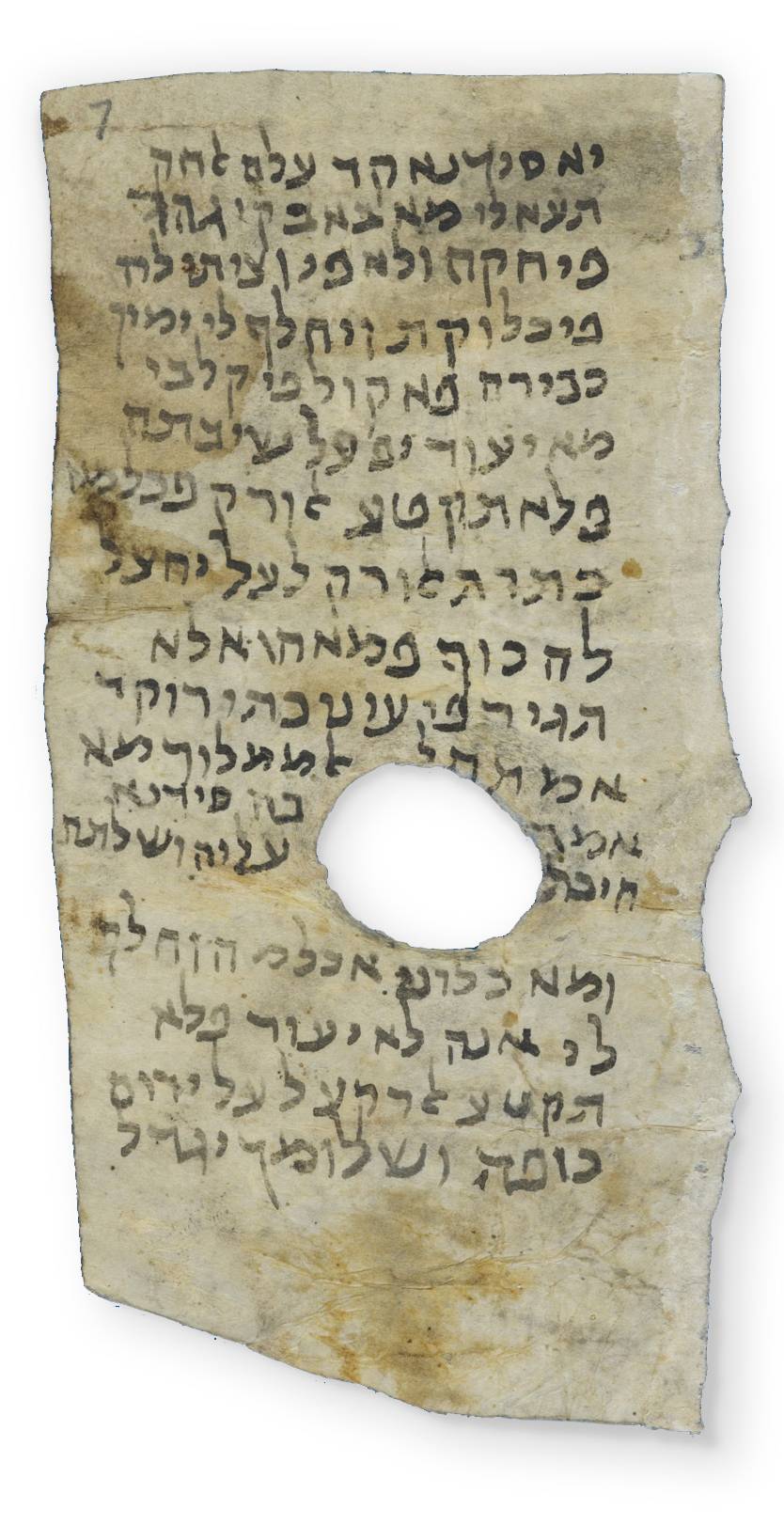 In this undated letter, a teacher complains to the parents of a student. The parents’ reply is on the other side of the document.

Bringing undergraduates into ‘the scholarly ecosystem’

Rustow’s students have a unique opportunity to examine original fragments. The world’s second largest Cairo Geniza collection, at the Jewish Theological Seminary (JTS) in New York City, is being housed temporarily at Princeton while JTS rebuilds its library. The collection includes some 40,000 handwritten text leaves and documents.

As director of the Princeton Geniza Lab, Rustow has made it a priority to incorporate undergraduates “into the scholarly ecosystem in the same way that you have undergrads in a biology lab mixing agar gels and watching research happen in real time,” she said. “Undergrads can do serious primary research even if they don’t have the language skills for the Geniza, though here at Princeton, I’ve been pleasantly surprised to see how many of them do.”

Creating databases of Geniza documents is one of the tasks in which undergraduates have contributed to the field. “They can make a database of 85 documents that mention wine, for example,” Rustow said. “Then they determine which documents haven’t been translated and kick them upstairs to graduate students and specialists at the Princeton Geniza Lab to translate, who then kick the translated documents back to the undergraduate students, who now have a set of unpublished sources for their junior papers and senior theses,” she said.

Rustow said she thrives on what she learns from students — in the classroom and the Princeton Geniza Lab. “I want to show them that I don’t know everything and that in fact what keeps me in this game is what [Italian historian] Carlo Ginzburg calls ‘the euphoria of ignorance.’ It’s precisely when I don’t know something that I’m most excited — and that’s when they should be excited too.”

The fact that the documents are literally fragments makes it essential to collaborate. “I could be holding onto the bottom half of a piece of a paper that my colleague in Oxford is working on the top of and we’ll never know unless we talk to each other,” she said. “When you’re working on a fragmentary corpus or an archive of 400 letters that was broken apart and is now in 60 different collections, how can you not collaborate?” 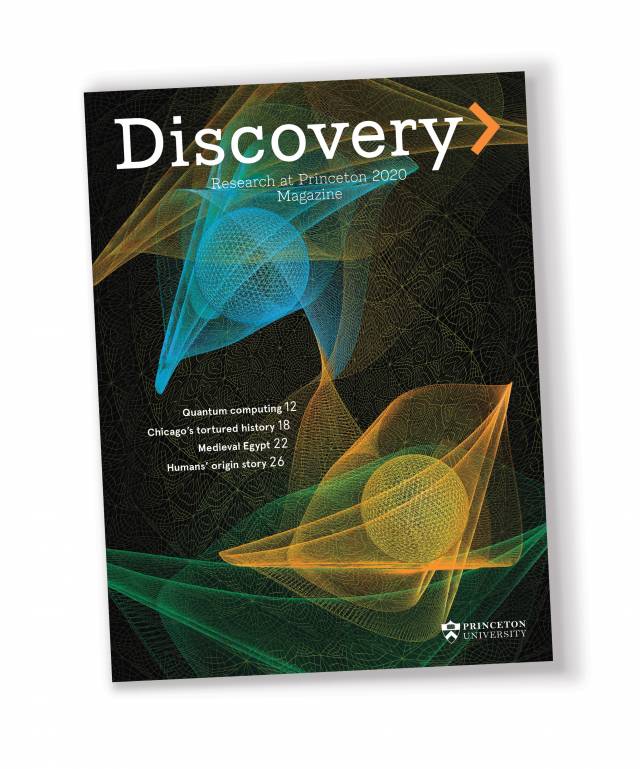 The Geniza Lab’s online database makes these collaborations easier than ever, but the irony of using digital technology to study ancient paper is not lost on Rustow. Paradoxically, she said, it’s precisely as old texts have been digitized that researchers have started paying attention to them as physical objects. For example, paper in the medieval Islamic world was made from used cloth, usually linen and hemp, which opens questions about the history of textiles, including clothing, and of the flax trade, which was the backbone of the Egyptian economy in the Middle Ages. “There hasn’t been a lot of work done on the material composition of Geniza paper,” Rustow said. “That’s an area that’s ripe for collaboration between humanists and scientists, a collaboration I’d like to see happen at Princeton.”