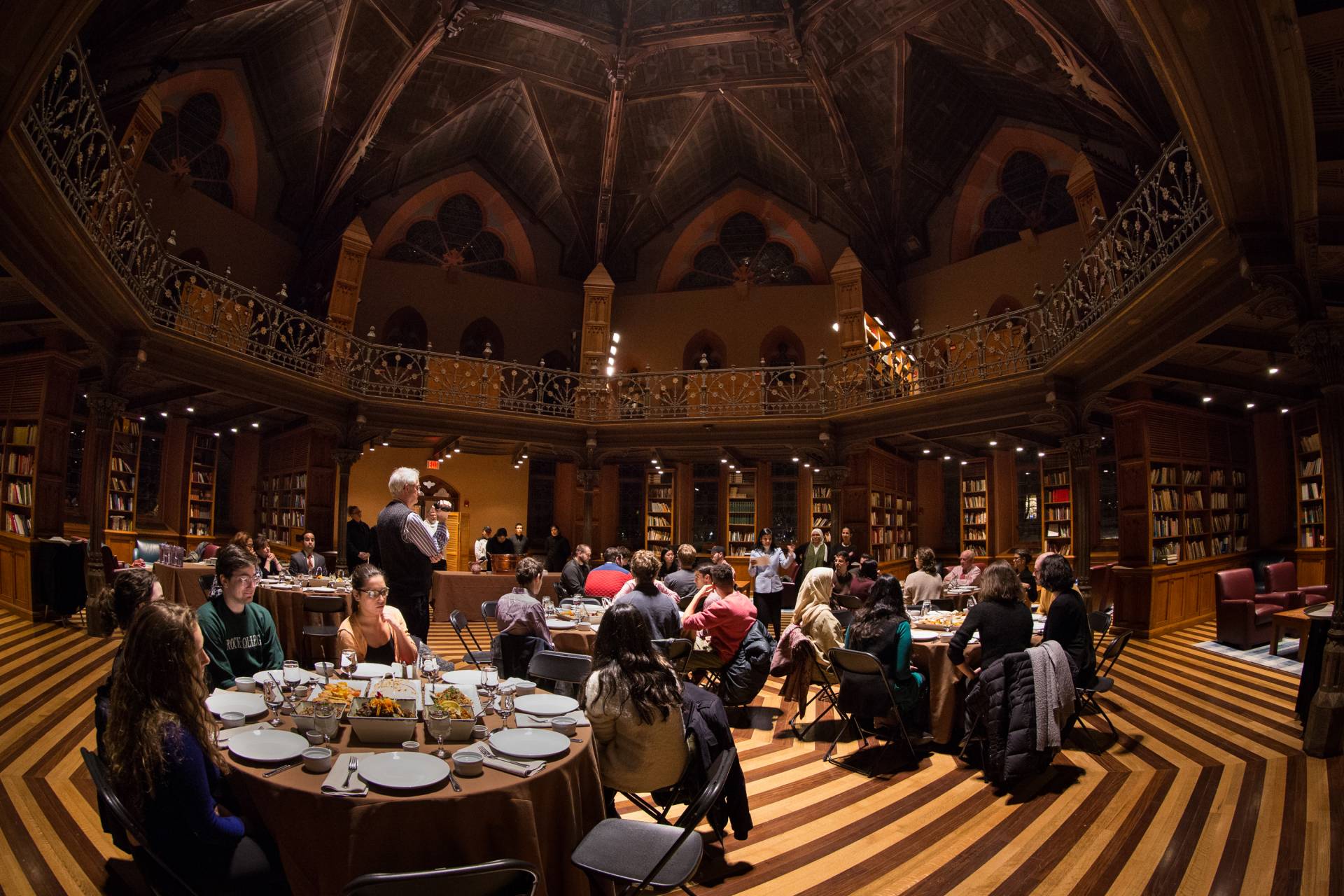 Inspired by the springl class “Medieval Cairo: A Survival Guide,” Princeton students, faculty and staff enjoy a traditional dinner in the style of the medieval twin cities of Fustat-Cairo, a burgeoning metropolis astride the Mediterranean Sea, Indian Ocean and trans-Saharan trade routes. The banquet was held March 6 in Chancellor Green Rotunda.

Rustow, the Khedouri A. Zilkha Professor of Jewish Civilization in the Near East and professor of history, works with the Princeton Geniza Lab, which makes accessible thousands of medieval documents that were found preserved in a Cairo synagogue. She collaborated with Smitha Haneef, assistant vice president, University Services, and co-chair of the Food and Agriculture Initiative, to bring to life to some of these texts.

Princeton’s Food and Agriculture Initiative explores global food and agriculture as a subject of critical inquiry and applied knowledge to address social and environmental challenges in service of humanity.

As part of her course, Rustow wanted the undergraduates to use the Geniza documents and other sources to explore some of the simplest questions of life — such as food — to understand how people lived in medieval Cairo. 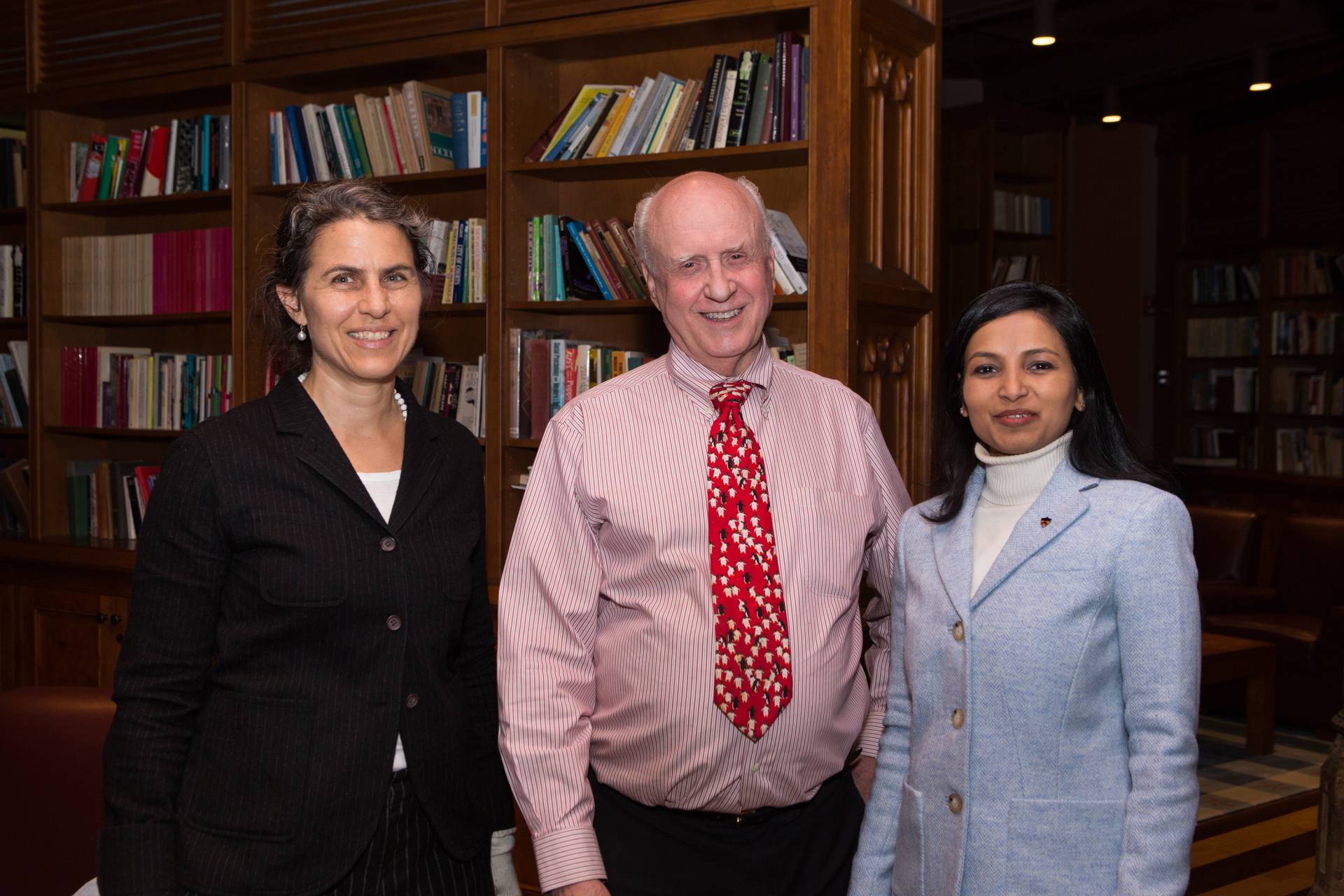 The banquet was conceived as a way to create a culinary experience from studies of medieval Cairo in a class taught by Professor Marina Rustow. From left to right, Rustow, the Khedouri A. Zilkha Professor of Jewish Civilization in the Near East and professor of history; Charles Perry, food historian and writer; and Smitha Haneef, assistant vice president, University Services, and co-chair of the Food and Agriculture Initiative.

“When we started our conversation, I knew that we had the potential to design something very special,” said Haneef. “By exploring the cuisine and customs of the time, students could reflect on their own individual experiences to more deeply learn about and connect to the daily lives of people from this compelling period of history.”

Rustow and Haneef designed a day of experiential learning that would incorporate a culinary lab and a communal dinner and enlisted American food historian and writer Charles Perry. In the lab in March, students created and later enjoyed two medieval Egyptian recipes translated by Perry: fish in tahini sauce (ṣifat ‘amal al-samak al-ṭaḥīniyyah) and an archaic sweet (akhmīmiyyah) from the ancient city of Akhmim.

Haneef and Perry planned a communal banquet of dishes (see recipes below) from the medieval Egyptian cookbook "Kanz al-Fawā’id."

“Cookbooks always focus on special-occasion food, even today, so they don’t bother to give recipes for everyday dishes,” Perry explained while planning. “There is no doubt that Egyptians have always eaten a lot of fūl, boiled fava beans, but there are no medieval recipes for it, and recipes for rizz mufalfal, pilaf and even mujaddarah, a dish of rice and lentils beloved by vegetarians today, tended to include meat.” 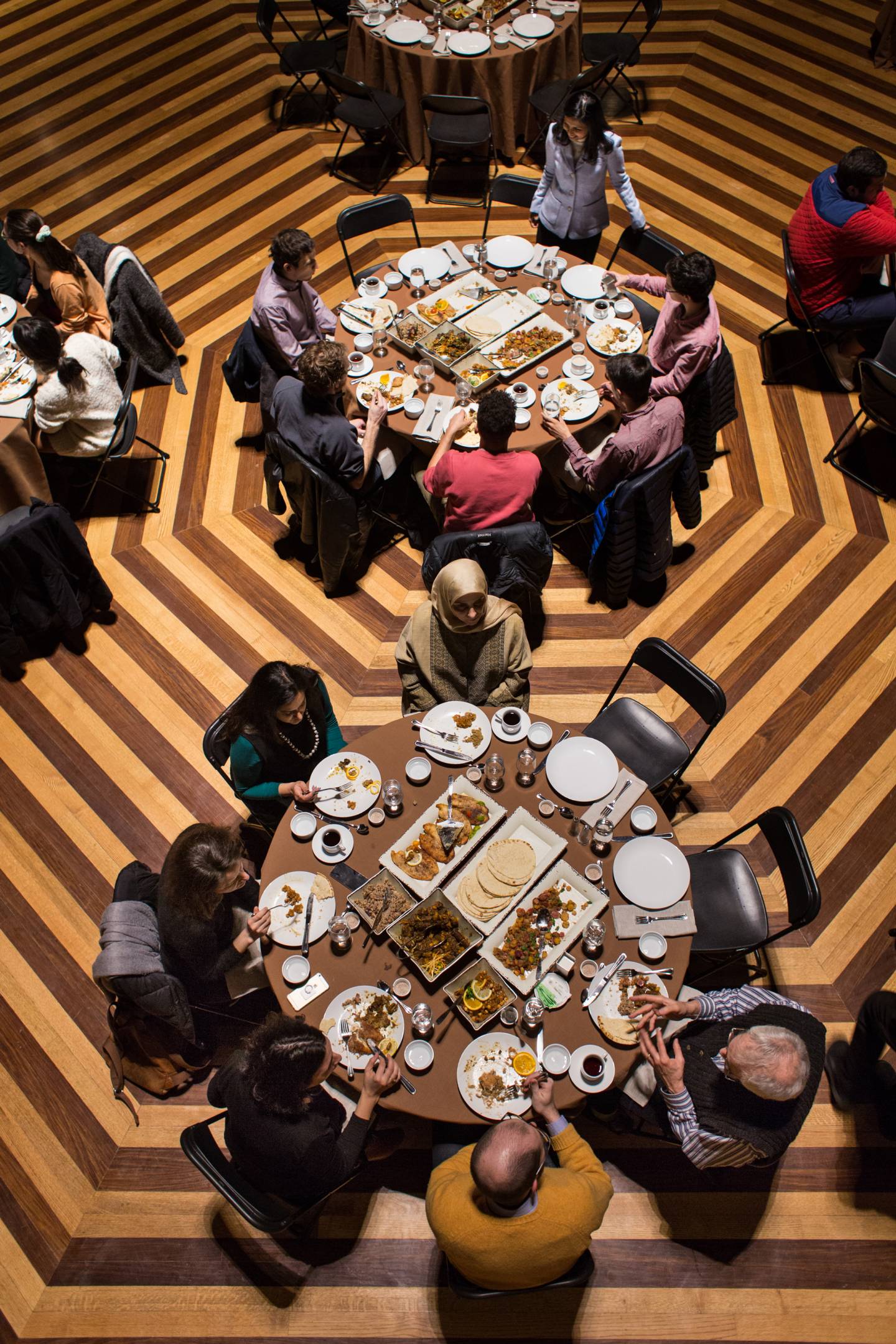 Banquet attendees try a range of dishes to explore some of the simplest questions of life — such as food — to understand how people lived in medieval Cairo.

Medieval vegetarian dishes (muzawwarāt) generally fall into two categories: Christian fast-day dishes and dishes prescribed by medieval doctors, who tended to be Christians. There is a chapter on muzawwarāt in the Iraqi cookbook "Kitāb Waṣf al-Aṭ‘imah al-Mu‘tādah," which suggests that Christians add heartiness to their vegetarian dishes by stewing them with olive oil, creating a category known as zeytinyağlı yemek in today’s Turkey and legumes à la grecque in French cuisine.

On March 6 in Chancellor Green Rotunda, the students and guests, including faculty and graduate students from the Department of Near Eastern Studies, experienced the final menu — eaten by hand — including:

This is an example of a cold vegetable dish (bāridah) that might be served as a snack, like a present-day mezze. Walnuts and caraway go surprisingly well with the vegetable-like aroma of cowpeas.

(To cook the cowpeas, pick over to remove any extraneous matter and cook in boiling water for 2 minutes. Remove the saucepan from the heat and cover for one hour, then drain the liquid and boil the peas in 6 cups fresh water with 1/2 teaspoon of salt until done, 1 to 1 ½ hours.)

Puree the walnuts until you can see a layer of walnut oil appear at the bottom of the food processor. Scrape into a frying pan and over medium heat and stir constantly until the raw walnut smell goes away, about 4 minutes. Dissolve the walnut puree with the olive oil and add the caraway, coriander and 1 teaspoon salt. Stir this paste thoroughly into the cowpeas. Add more salt if needed. 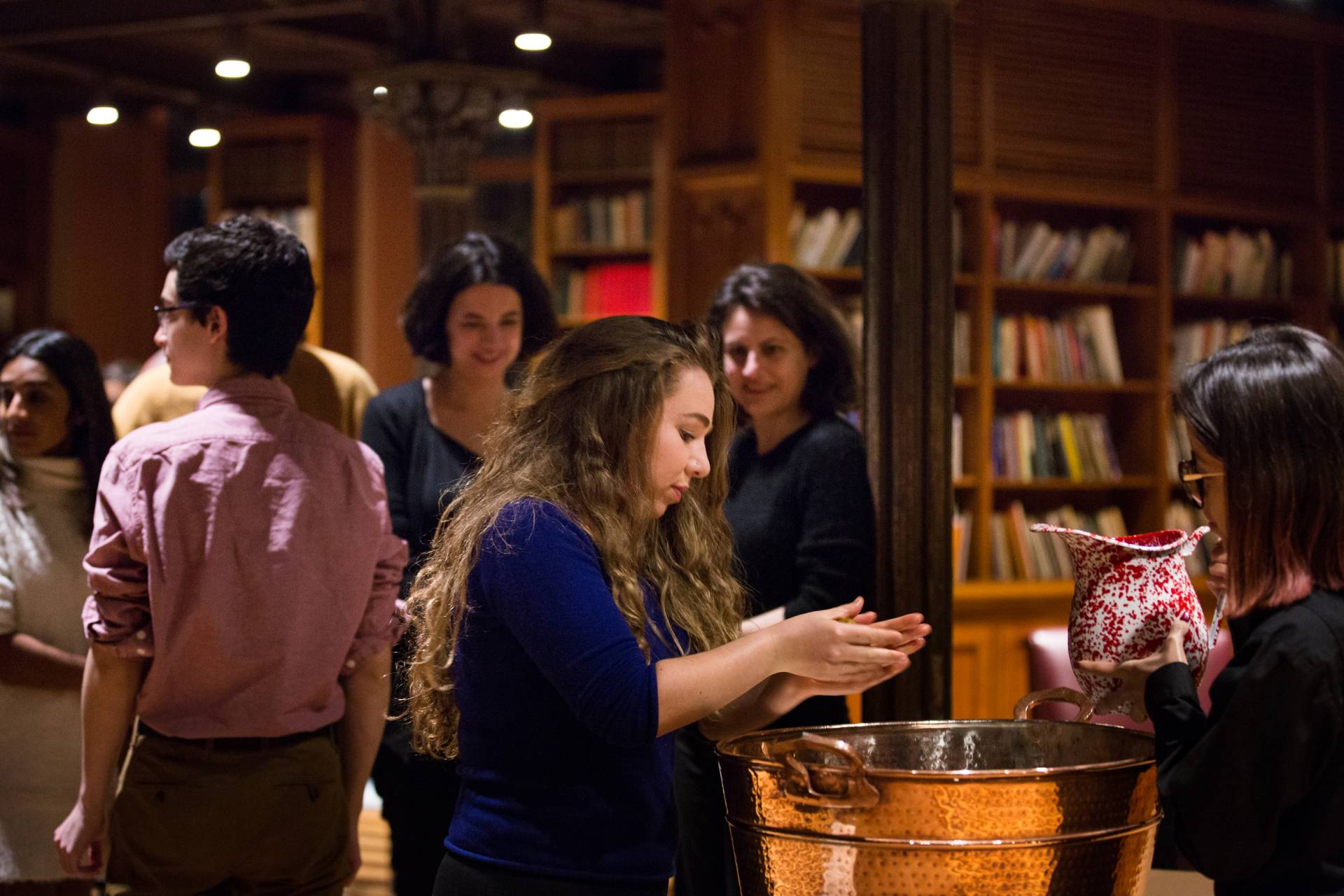 Diners wash hands before eating the meal without utensils, in the style of the time.

This is an example of the Persian-derived taste for cooking meat with fruit. It also illustrates the practice of removing the scum of congealed blood that rises from boiling meat.

7-10 threads saffron, crushed in a mortar

¼ cup sugar, or more to taste

Trim the lamb of any solid fat and cut into ¾ inch chunks. Put in a saucepan with water to just cover, add the salt and bring to a rapid boil. Remove the scum of congealed blood that rises. Continue until the water has boiled away, about 45 minutes.

Meanwhile, take the apricots and find the cavities where the seeds were. Open them with the tip of your little finger and insert the almonds.

When the meat starts to sizzle in its own fat, add the apricots, raisins, jujubes and 1 ½ cups water. Stir in the mixed spices, cinnamon stick, Ceylon cinnamon, mastic, saffron, poppy seeds and mint. Taste and add sugar as needed. Bring to the boil, reduce heat simmer covered, adding water if needed, until the meat is completely tender and even falling apart, about 45 minutes. 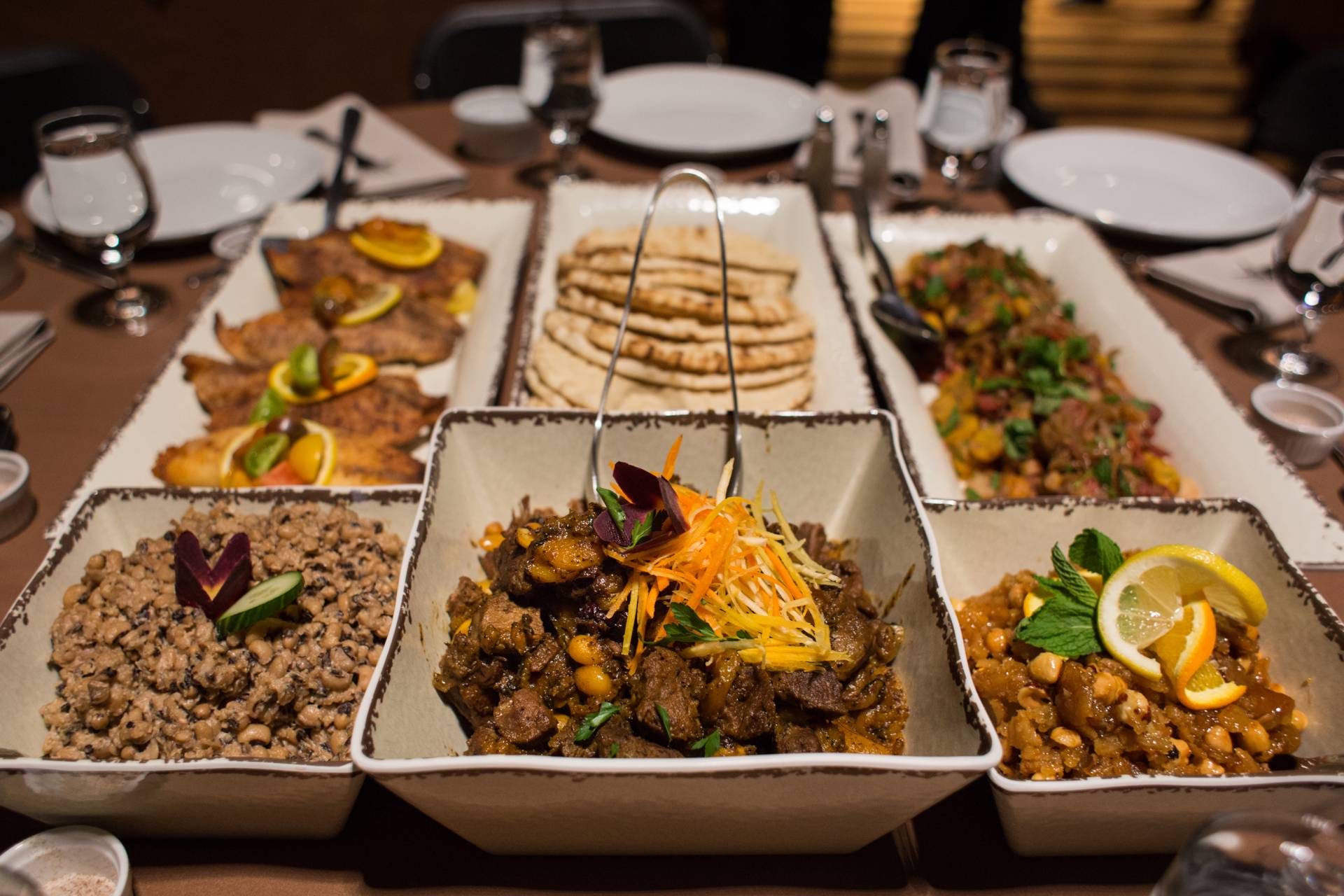 This is a rare example of a medieval dish that has survived to the present, but now it is made with lemon juice instead of vinegar and the fish is usually baked in the rich sauce, rather than being fried and laid on top of it.

1 cup sesame or other light oil, plus more as needed

½ teaspoon mixed spices (or pinches of cinnamon, clove and ginger)

Chop the onions. Put ¾ cup oil in a large pan, add the onions and fry over medium heat until medium brown. Sprinkle with the pepper and mixed spices. Scrape the onions out of the pan.

Crush the saffron threads in a mortar or with the back of a spoon. Mix the tahini with 1 cup of the vinegar; it will thicken up. Work in the remaining ½ cup vinegar, salt and saffron. Stir into the fried onions, bring to a boil and ladle onto a serving dish.

Dip the fish in flour, add the remaining ¼ cup oil to a pan and fry over medium heat until the flesh stiffens, turns white and will separate into flakes if prodded, adding more oil if needed. (The filets will have a thicker and a thinner section. Fry the thinner ones first.) Transfer fish onto the onion-tahini sauce and serve.

This sweet is named after an ancient Egyptian city and has a quite archaic look. Before sugar came to Egypt, its ancestor may have been made with honey alone. Because of the aroma of browned bread, it seems like an extremely exotic cousin of pancakes. It shows the medieval taste for nut-based sweetmeats and perfumy flavorings. The recipe says it will keep a year and continue to improve the whole time.

(Note: Be very careful with liquid musk -- it is so intense that even so little as a drop would be enough to make a dish inedible.)

1/2 pound flatbread such as pita or lavash

Tear the bread into roughly 1-inch pieces. Put the oil in a very large pan, add the bread and fry it over high heat, stirring and flipping upside down, until it absorbs most of the oil. Add the sugar, reduce the heat to medium and stir until the bread starts releasing the oil. Add the honey and hazelnuts and stir everything together.

This is another vegetarian bāridah, and a splashy one, with its sweet-sour flavor, fresh herbs and topping of deeply browned onion rings. Fresh rue can be hard to find, but it is just an accent and might be omitted.

Cut the carrots into disks and boil them just until done. Drain and put in a mixing bowl.

Slice the onion, separate into rings and fry until brown, stirring constantly, about 20 minutes.

Mix the carrots with the parsley, mint, rue, coriander, cinnamon, clove and pepper. Stir the vinegar and honey together and toss the carrots with it. Transfer to a serving dish and garnish with the browned onion.