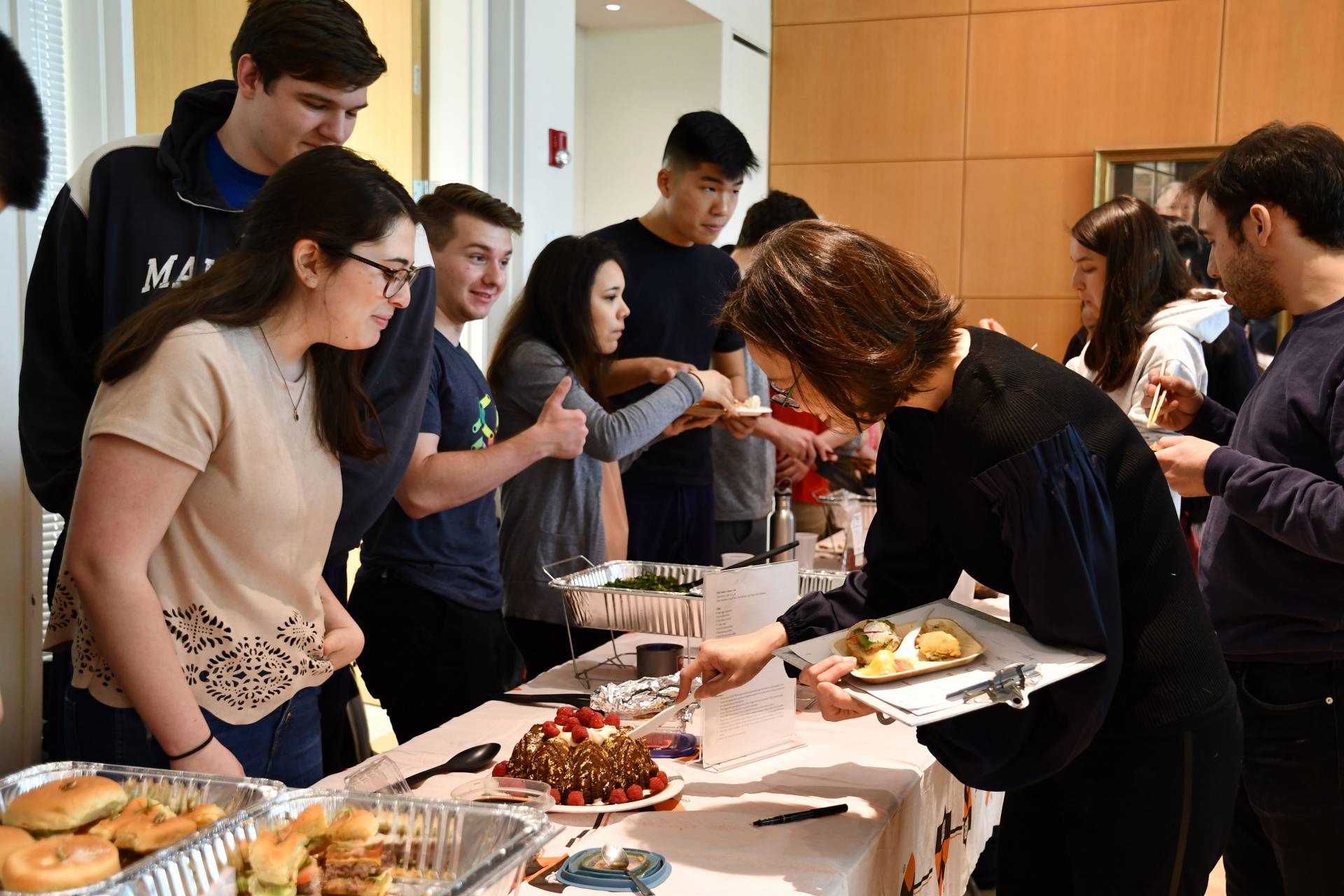 Students in the spring course “Literature, Food, and the American Racial Diet” developed recipes in direct engagement with texts from the syllabus, or with their own interests and research. Pictured: Professor of English and Director of American Studies Anne Cheng samples a slice of Colony Cake, prepared by seniors Emma Park, Paul Schorin, Lena Volpe and Alex Yablonski.

On a Monday this spring, talk rose in the air with whiffs of garlic and ginger, and students held up their phones to capture the lively scene in the Friend Center Convocation Room. It was lunch time, and the annual cook-off and feast prepared by teams of students in the course “Literature, Food and the American Racial Diet” was being served.

Tables lined three sides of the room, crowded with steam trays, platters and casserole dishes. Each student team presented its dish and a statement relating the dish to the themes of the class. Anne Cheng, professor of English and American studies and director of the Program in American Studies, encouraged the students to think “historically, archivally, contemporarily, globally, creatively” in developing recipes, in direct engagement with texts from the syllabus, or with their own interests and research.

“This cake is our cake,” wrote seniors Emma Park, Paul Schorin, Lena Volpe and Alex Yablonski in the statement about their Colony Cake, “an original recipe inspired by dozens of recipes from Europe and the United States for Baba au Rhum, or Rum Baba.” The team dubbed themselves Julia’s Childs. They noted that “traditional Rum Baba is from France but made with ingredients that cannot […] grow in France.” 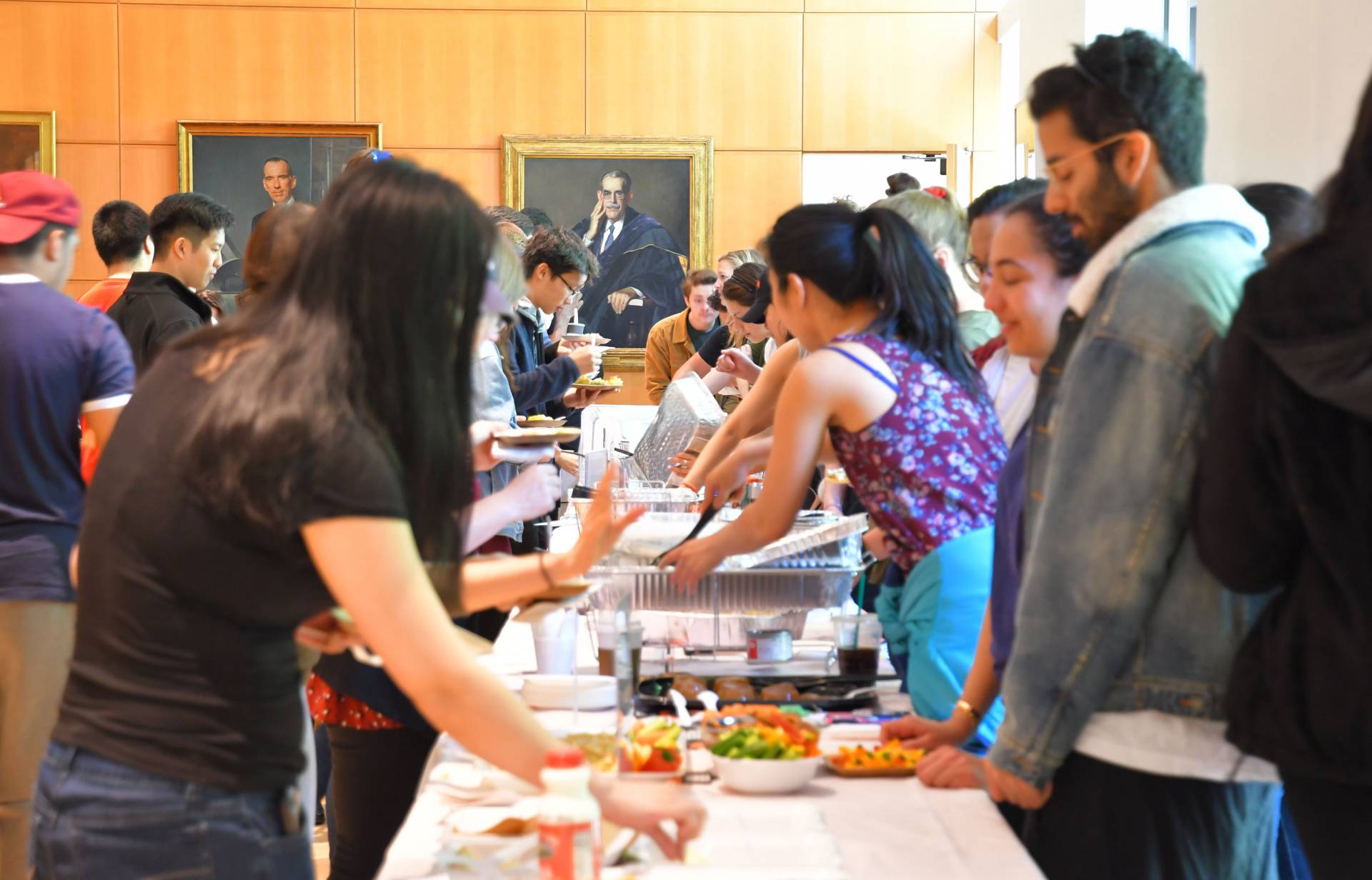 Students serve and taste dishes at the end-of-semester cook-off and feast held in the Friend Center Convocation Room.

The team chose cinnamon, coffee and rum as their focal ingredients, and explained how trade and conquest made these ingredients popular in Europe and North America as “luxury items” disassociated from their origins. They noted that the flavors “taste foreign and like home.”

Junior Vivian Ufongene, senior Joanna Curry, sophomores Yolore Airewele and Isaac Ward, and first-year student Samantha Liu — The Banana Chefs — presented “The Layers of Race and Gender in Tiramisu.” Citing readings from the class, they noted how terms “like ‘sweetheart,’ ‘cupcake’ [and] ‘sugar’ strengthen associations of women and sweetness” and reduce women to “something that is easily taken up and consumed by others.”

Kimberly Bain, a graduate student in English who led a precept for the course, said: “Students grappled with questions of identity, culture, appropriation and authenticity. What does this mean for me? For the communities I identify with? For my family? For the environment? For the current sociopolitical moment? For the futures I want to see?”

A two-person team dubbed The Fusion Crew challenged notions of authenticity in ethnic cuisines, and stereotypes of immigrant groups’ cultural characteristics. The team created Italian potstickers, filling dumplings made from a traditional Chinese recipe with Italian sausage and spices, fusing “stereotypical Italian and Chinese dishes” and declaring the dish their “own ‘American’ representation and creation.” 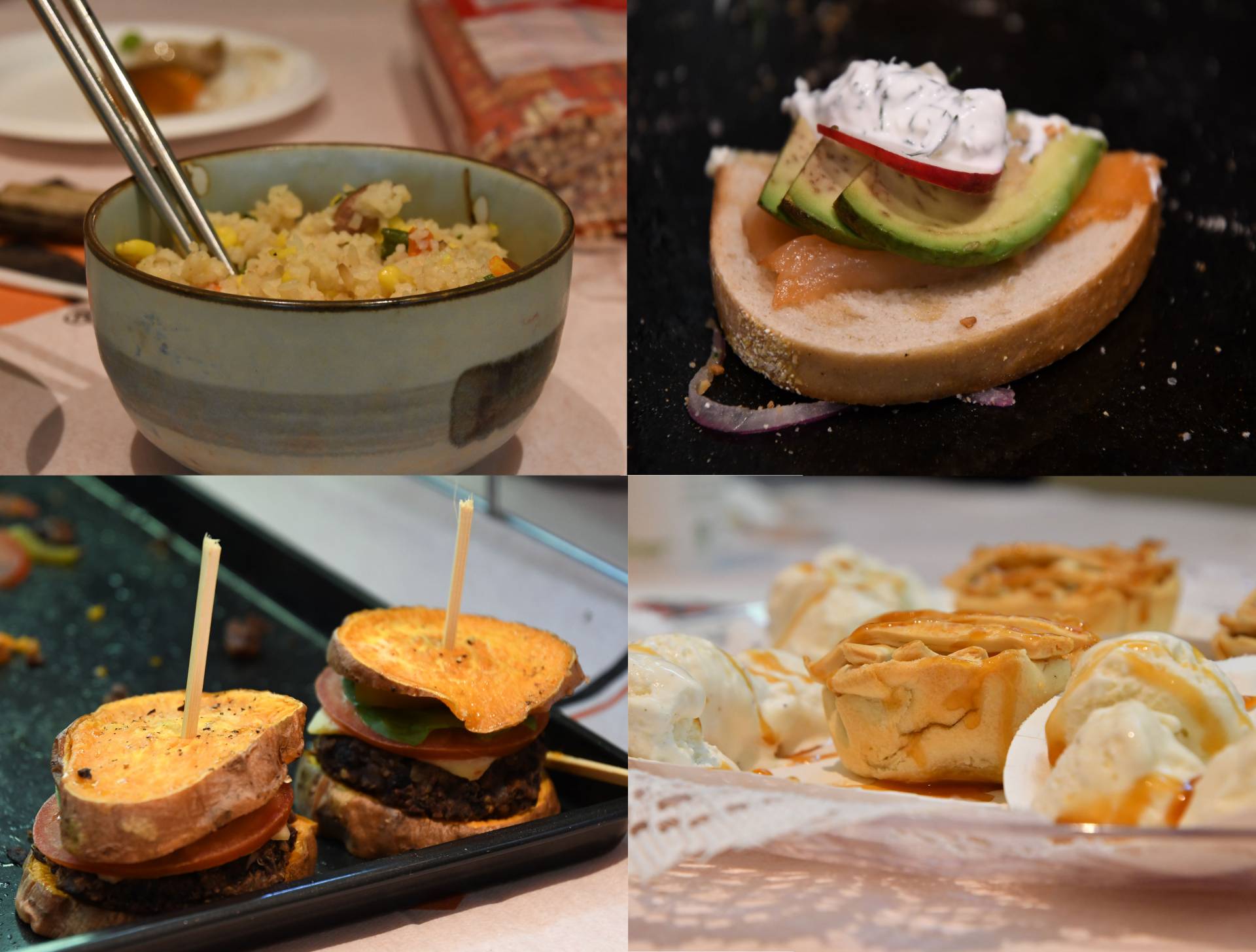 Dishes created for the cook-off included (clockwise from upper left): “Rice 3 Ways: Does the Manner of Consumption Inform Taste?”; the "U.S. side" of “An Avo Split”; “Not Your Mother’s Apple Pie”; and “Bacon & the Sinister Adkins Diet” (a twist on the Atkins diet, chosen with a nod to team member Jake Adkins).

Senior Hinako Kawabe and sophomores Sarah Hultman and Tiffany Sun — Team Matcha — questioned the idea of authenticity as presented by companies marketing foods as healthy. In internet searches about matcha — a powder made of finely crushed green tea leaves — they found words like “zen” and “samurai” along with information about matcha’s health benefits. On Whole Foods’ website, they discovered many matcha products are labeled as “superfoods” and sold by non-Asian brands. The team suggested that matcha is “linked to an obsession with Japanese culture as a whole,” but that at the same time its popularity resembles that of quinoa, resulting in “a loss of its identity since becoming popular in the U.S. … an act of colonialism for an ethnic dish turned health craze.” The students responded by using matcha in pound cake, a “familiar” dish and not one “that comes to mind when we think of health.”

Cheng said that while the dishes offered original thinking about novels, paintings and films, they also tasted good — with one exception: the exploration of “inedible foods in situations of American confinement” presented by Team Prison, Fyre and ICE (seniors Connor Bridges, Majida Halaweh and Sarah Pacilio, and sophomore Jimin Kang).

The teams consulted with Campus Dining staff members for help in developing and finalizing recipes. During the final event, teams were judged on the descriptions of their dishes and on the dishes themselves. Brad Ortega, executive chef with Campus Dining at Butler and Wilson Colleges, spoke with each team and tasted each dish. Cheng and Smitha Haneef, assistant vice president, Campus Dining, awarded prizes.

The 33 recipes that the class created have been collected in a cookbook available as a PDF, and in print in the Program in American Studies office.