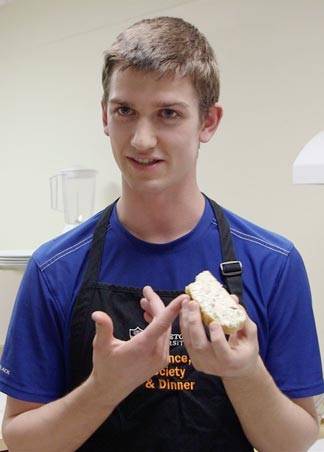 In the spring 2016 freshman seminar "Science, Society and Dinner," Princeton students learned the basics of knife skills, sautéing and palate education, but also about the water cycle, sustainable agriculture and the biochemistry of taste — and how all those pieces fit together. Student Daniel Shepard holds a piece of bread baked at Bobolink Farm in Milford, New Jersey, where the class visited on a field trip.

Princeton's newest undergraduates set out on a path of inquiry and discovery this spring through the University's freshman seminar program.

A total of 281 first-year students were enrolled in the spring semester in 26 seminars, each of which was held in one of the six residential colleges. The seminars are open to students from all of the residential colleges. Class discussions often continue in informal settings on and off campus, through meals, guest lectures, field trips and other activities.

For decades, Craig Shelton has been one of the country's top chefs. This spring, he took on an additional job: instructor at a Princeton University freshman seminar.

After years in restaurants including Le Bernardin and Bouley in New York City and his own Ryland Inn in New Jersey, Shelton found himself shuttling between home-size electric ranges as he faced Princeton students and a barrage of questions: "Excuse me, chef, is this hot enough? Chef, what order do we cook these in? How do I slice this?"

"You can't teach people about food only through books," he said after one class. "But to really understand food, and to understand the challenges of food and society, you can't just stay in the kitchen." 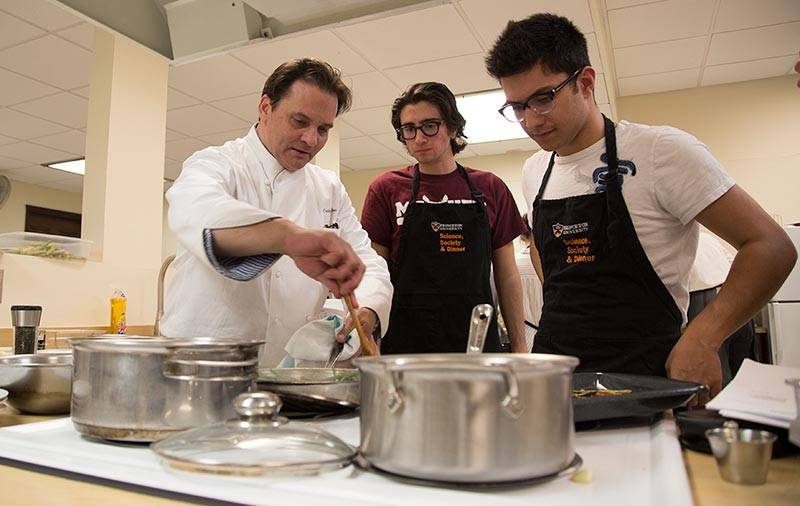 From left, chef and lecturer Craig Shelton works with Justin Sansone and Iskandar Haykel on browning food in a pan, a process known as the Maillard reaction. (Photo by Danielle Alio, Office of Communications)

In the course, "Science, Society and Dinner," first-year students learn the basics of knife skills, sautéing and palate education — along with the water cycle, sustainable agriculture and the biochemistry of taste — and how they all fit together.

As Shelton said, you can't learn about food without getting your hands dirty. So one night a week, the students sliced, breaded, fried, baked and ate together. But before that, they listened as guest lecturers spoke about the science of food — the chemistry, social tradeoffs and history. They also took field trips to farms.

"We are teaching people to understand the inputs of water and energy and carbon that go into creating their diets," said Kelly Caylor, an associate professor of civil and environmental engineering and director of the Program in Environmental Studies, who was the course's co-instructor for its first semester. "When you make the choice between tomatoes from a local greenhouse or tomatoes from Mexico, what are the tradeoffs? What are the costs?"

The course, designated the Shelly and Michael Kassen '76 Freshman Seminar in the Life Sciences, "is designed to introduce students from across the University to environmental science and policy," Caylor said.

Students describe their experience in the freshman seminar "Science, Society and Dinner." (Video by Danielle Alio, Office of Communications)

Daniel Shepard, a rising sophomore who took the seminar this spring, grew up on a farm in southeastern Wisconsin and said "it was always a part of my life, raising our own food, canning it, freezing it.

"It just made sense."

Shepard said the seminar reaffirmed the importance of sustainable food production and use, but also broadened his perspective on methods to meet those goals.

"It made us think critically about all of the components of a menu," he said. 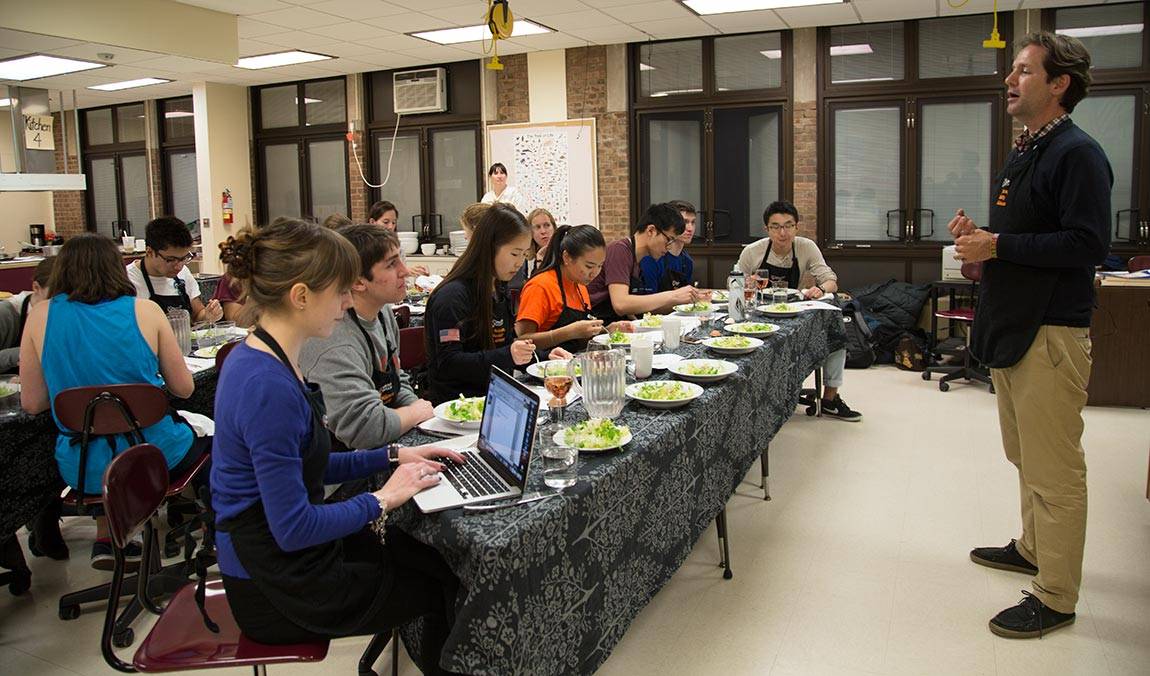 Kelly Caylor, an associate professor of civil and environmental engineering, led the course and introduced students to the broad issues surrounding the food system, including the water, energy and carbon budgets that are needed to feed the rising global population. (Photo by Danielle Alio, Office of Communications)

During the course, the 15 students attended lectures and alternate lab sessions in the kitchens on the other side of the room. Topics ranged from "Food, Trade and Economics of Food Systems" to "Sous Vide of Vegetables." In addition to lab reports and essays, groups of students were graded on a final five-course menu that they presented to their instructors and classmates along with an analysis of their choices in planning the meal. They also cooked and served one or two dishes from their menu.

For their project, members of Shepard's group envisioned a meal including a Japanese risotto with onigara-yaki shrimp, a green salad and green tea cheesecake (of these, they actually cooked the shrimp risotto.) With each ingredient, the team tried to balance optimum flavor with farming practices, transportation expense and ecological cost. The salad, with all local ingredients, was easy, but the shrimp risotto was more difficult, because catching or farm-raising shrimp both carry substantial costs.

"Ultimately, to tie it back to the main idea of the class, we have to develop sustainable ways of growing food," Shepard said. "The answer is out there, but it is going to take spreading the word and people being open to change." 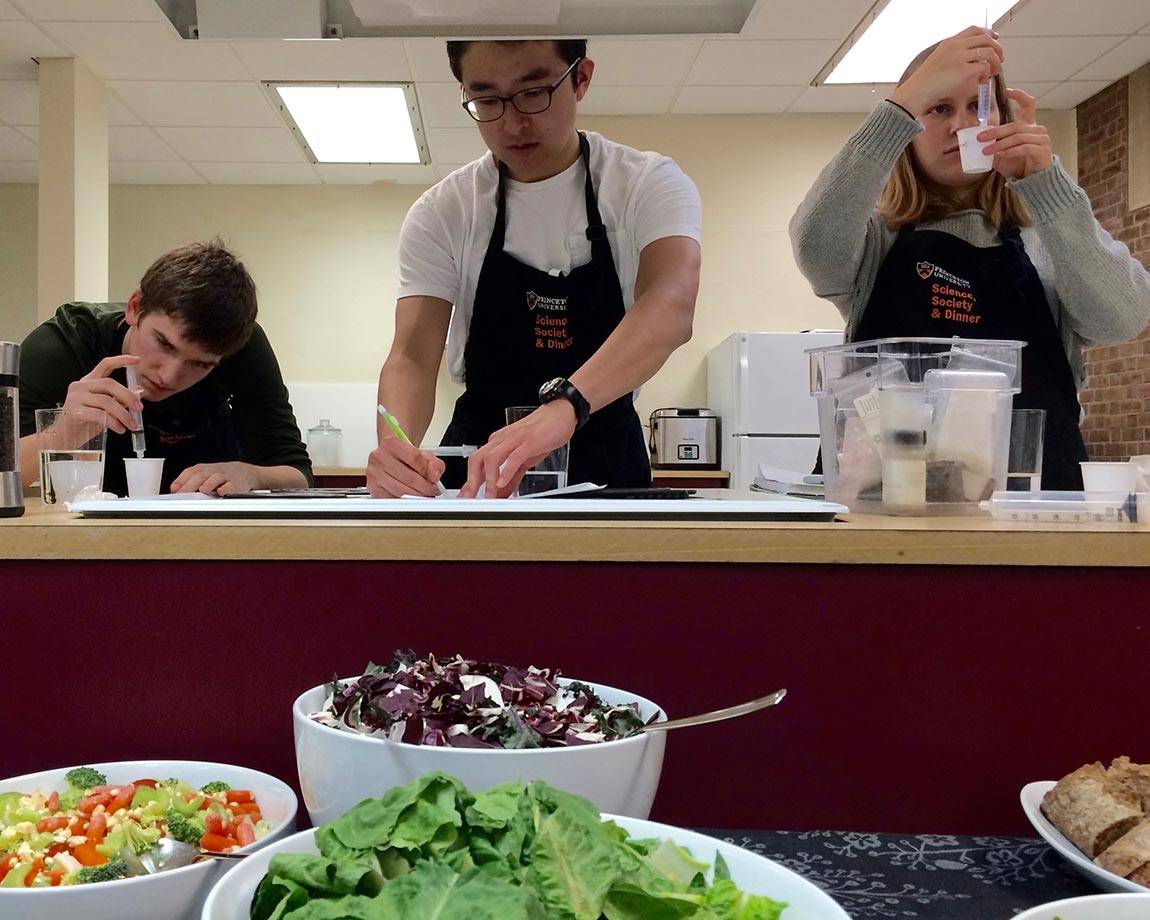 In some ways, the seminar is a step in that direction. Karla Cook, of the Princeton Studies Food consortium, envisioned the course, and rising junior Rozalie Czesana, also of the consortium, proposed it initially as a student-initiated seminar and then as a freshman seminar. Caylor signed on as the lead teacher and four other faculty members from the across the University gave guest lectures: Alan Gelperin, senior lecturer in molecular biology and the Princeton Neuroscience Institute; David Wilcove, Professor of Ecology and Evolutionary Biology and Public Affairs and the Princeton Environmental Institute; Cristina Racchella, visiting lecturer in French and Italian literature; and Sophie Meunier, research scholar at the Woodrow Wilson School of Public and International Affairs. The course received support from the Dean of the College and the R. Gordon Douglas, Jr. '55 P86 and Sheila Mahoney S55 Fund.

Czesana said that the global food system is a critical, and academically underserved, issue.

"There is food in the dining halls, and there are classes about sustainability," Czesana said. But creating "Science, Society and Dinner" brings together science, agricultural practices and culture, with high-level cooking to illustrate and amplify the points, she said.

Czesana worked with Cook, Caylor and Shelton to create the seminar. Putting the class together took most of a year and involved developing a syllabus and scouting teaching kitchens, which were found at John Witherspoon Middle School in the town of Princeton.

Cook, a longtime food journalist formerly with The New York Times, said that food is a bridge between students' personal lives and the climate.

"The course uses the community of the table to drive the science," she said, adding that addressing climate change requires an "all-of-the-above" approach that spans the personal choices and scientific understanding. "If outrageously delicious food, with its art, its very human story and its scientific requirements can move the needle and motivate students in their personal and professional lives, we're ready to cook."