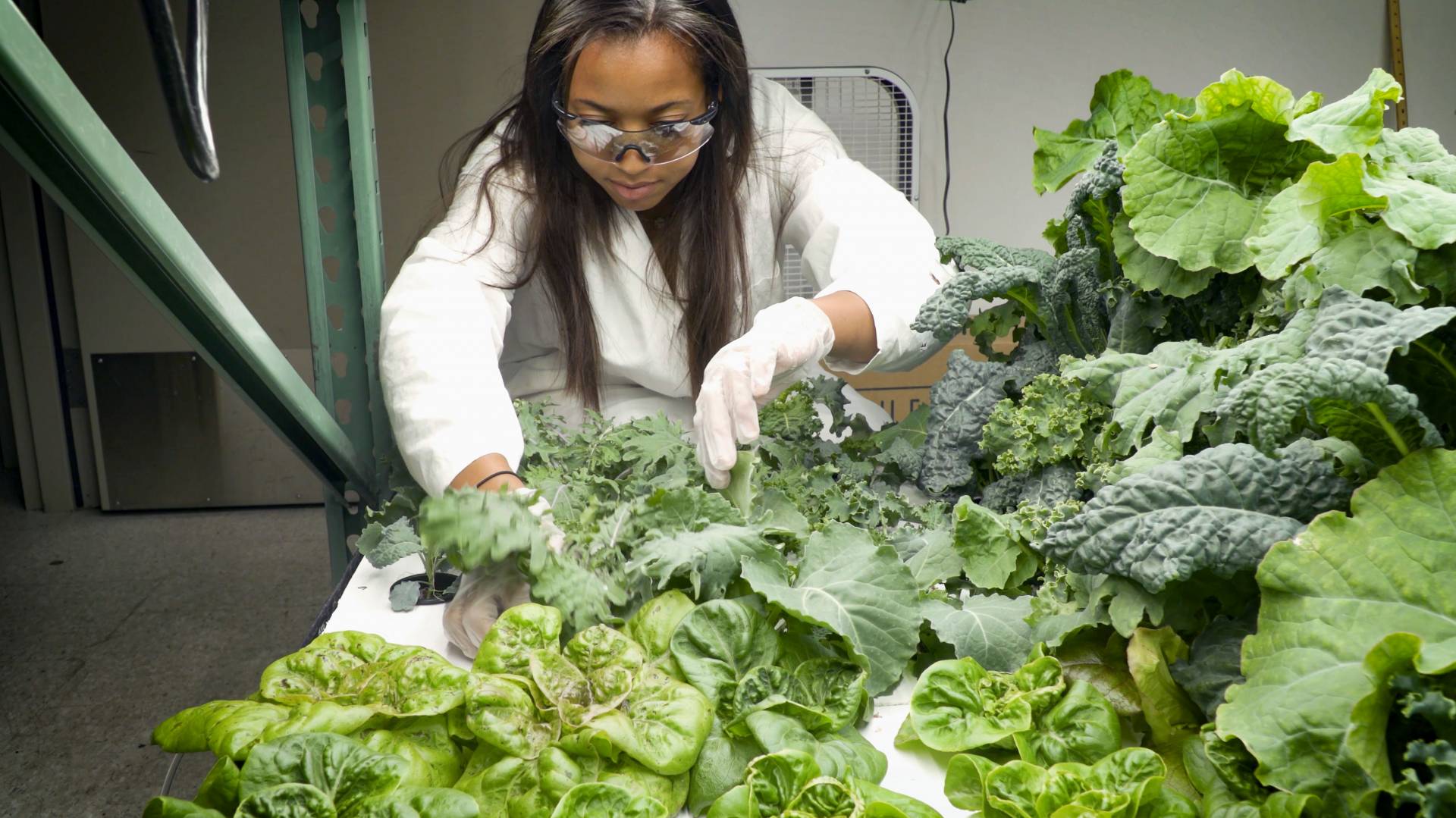 Princeton University's Vertical Farming Project was established as a model vertical farm — which involves growing food crops indoors on stacked shelves — to generate accessible and up-to-date research for the field. For her senior thesis, Princeton senior Jesenia Haynes (above) is analyzing the environmental impacts of growing kale and lettuce in a vertical farm versus a conventional farm. Haynes is one of several student researchers engaged in the Vertical Farming Project, which is part of the Campus as Lab Initiative.

Princeton University's Vertical Farming Project began at a conference in 2016 when the topic turned to increasing the crop yield of hydroponic systems — wherein plants are grown indoors without soil by using only water and nutrient solutions — by pressurizing water with extra oxygen in a tank before feeding it to the plants. The idea was on everyone's lips.

Paul Gauthier knew it was wrong. A plant physiologist, he realized that once the water leaves the tank, it will depressurize and release more oxygen, which reduces photosynthesis.

"They wanted to provide more oxygen to the roots to increase the yield, but they were doing the opposite of that," said Gauthier, an associate research scholar in geosciences and the Princeton Environmental Institute. "That's when I decided to get into the game."

In April, Gauthier launched the Vertical Farming Project with support from a High Meadows Foundation Sustainability Fund grant obtained through the Office of Sustainability. The project includes a number of student researchers and is part of the Campus as Lab Initiative. Vertical farming involves growing food crops indoors on stacked shelves. Hydroponics is the most popular form of vertical farming, but the concept is always the same. Sheltered from pests, frost and the scorching sun, plants can grow rapidly, with harvests taking place several times a year. The Princeton farm can produce mature basil in one month, month after month.

Located in a small windowless room in Moffett Laboratory, Princeton's vertical farm is used to identify the optimal conditions for growing food indoors. The farm contains about 80 plants. (No tomatoes, for space considerations: "If you give them the right conditions, they'll grow and grow and grow and never stop," Gauthier said.) The most successful plants are herbs and leafy greens, which allow for the occasional feast. The project has partnered with an eating club, the Terrace F. Club, which has incorporated the project's bounty into meals. An Oct. 24 event at Forbes College featured dishes made with lettuce and herbs from the vertical farm and the Princeton Garden Project served alongside produce from a commercial food distributor.

Gauthier, who has been at the University since 2012 and focuses his research on plant resilience to environmental stress, envisions the Princeton project as an open-source model for vertical farming. Free from having to turn a profit, he and the students involved in the project can experiment with various crops, techniques, technologies and nutrient solutions. Their focus is getting the best harvest with the least amount of resource consumption, then making those data publicly available. They grow less common crops such as edible flowers and wheat. Wheat from the Princeton vertical farm is ready for harvest in 65 days. One of Gauthier's side projects is to see how much and how economically he can produce flour from a single wheat harvest. He would like to eventually grow citrus and fruit shrubs.

"We want to create new knowledge in the field," Gauthier said. "We want to prove that this is sustainable. All the research strengths of Princeton can be combined into this project: sustainability, environmental science, biology and engineering. We hope Princeton will start leading the field by providing new technologies and training students for consulting in this new industry." 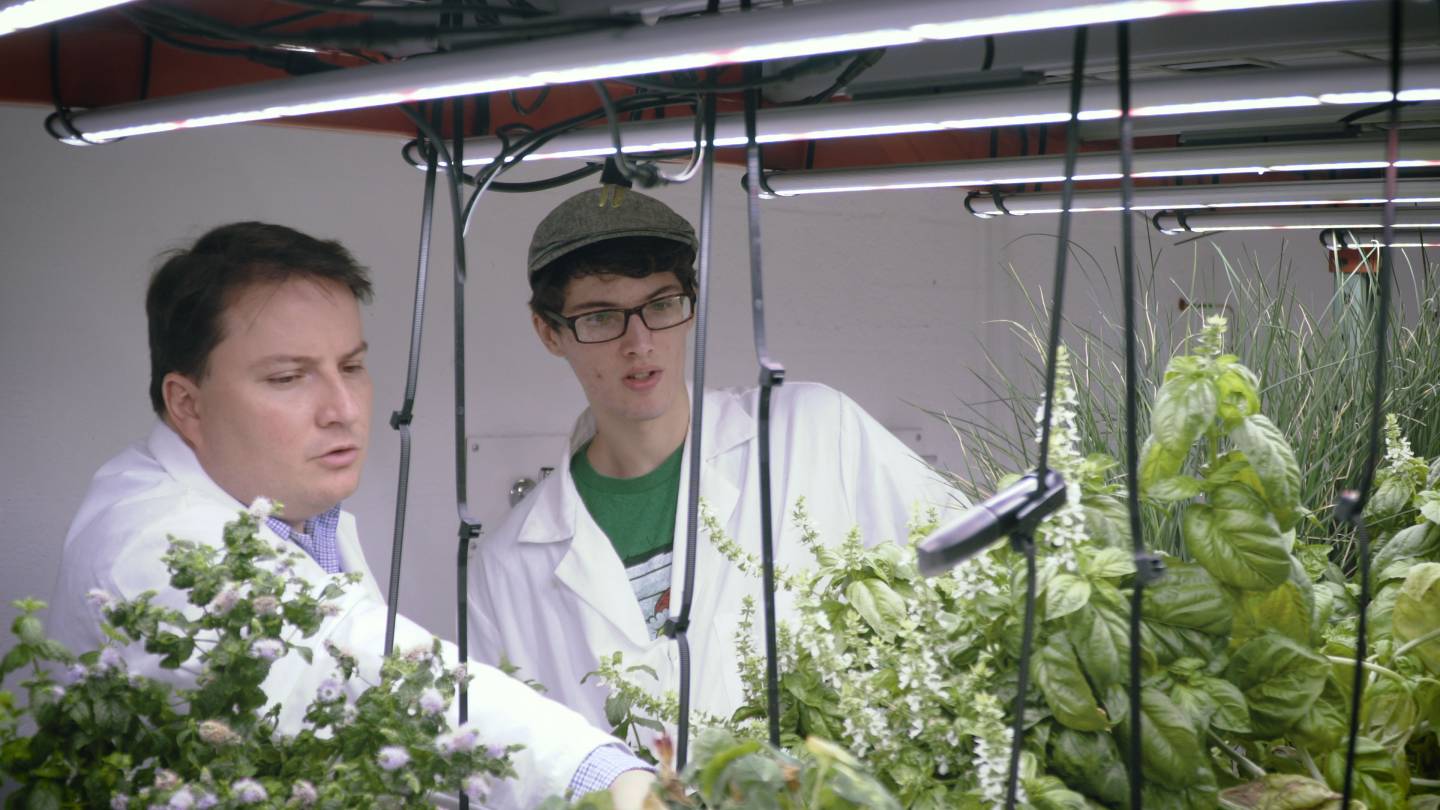 Paul Gauthier (left), a plant physiologist and an associate research scholar in geosciences and the Princeton Environmental Institute, launched the project in April to identify the optimal conditions for growing various crops with the least amount of water and energy, then make those data publicly available to potential growers. In this video, Gauthier, Haynes and sophomore Seth Lovelace (right) discuss the project’s aims and their individual research interests.

A field ripe for cultivation

In recent years, vertical farming has gained traction as a method for producing food for a growing global population that is running short on arable land. Reducing the need for new — or even existing — farmland would go a long way toward preserving natural ecosystems and restoring the ones ravaged by agriculture, according to Dickson Despommier, the Columbia University microbiologist whose 2010 book, "The Vertical Farm," helped popularize the topic. Vertical farms reportedly consume up to 95 percent less water than conventional farming by recycling water and they also eliminate the chemical-laden runoff that poisons waterbodies and aquifers.

The technique also has potential for bringing locally sourced and readily available food to arid and urban areas, which would reduce shipping-related carbon emissions. Several vertical farms are now based in and around New York City, including the world's largest vertical farm, Newark-based AeroFarms, which produces up to 2 million pounds of produce annually and is headquartered in an old steel mill.

Gauthier discovered, however, that the industry overall suffers a lack of accessible and up-to-date research on everything from leaf physics to a breakdown of the market. He found very little or outdated peer-reviewed data on nutrient efficiency, automation or sustainable energy and water use. The hydroponic farmers Gauthier has met largely rely on trial-and-error and information from the 1980s. Commercial vertical farms are private businesses that keep their research results to themselves, he said.

"In science, we know very well how to grow plants hydroponically," Gauthier said. "The problem is that the public doesn't know that."

Admittedly, vertical farming is not a booming research area, Gauthier said. For instance, there's little data on growing herbs and leafy greens, which are high-demand crops, he said. Plant and agricultural scientists largely focus on optimizing traditional farming, particularly through the use of genetically modified crops.

"There's a difference between what science is doing and what vertical farmers need to know," Gauthier said. 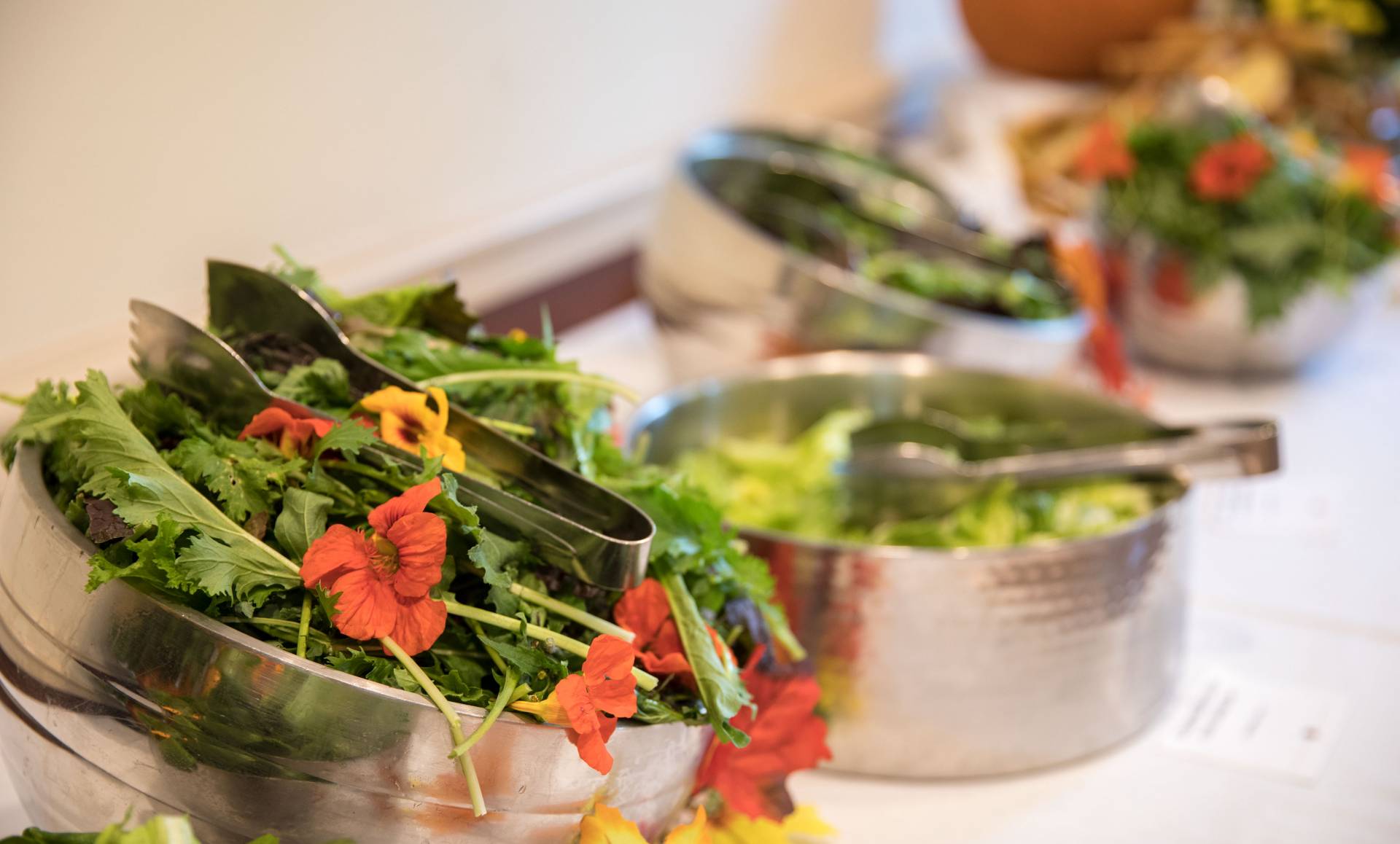 The Princeton vertical farm contains about 80 plants. The most successful are herbs and leafy greens, which have been distributed on campus. The Terrace F. Club eating club has incorporated the vertical farm's harvests into meals. An Oct. 24 event at Forbes College (above) featured salads made with lettuce from the vertical farm (foreground) versus lettuce from a commercial food distributor.

For her senior thesis, Princeton student Jesenia Haynes is analyzing the environmental impacts of growing kale and lettuce in a vertical farm versus a conventional farm. Her focus is on water and electricity use, the energy costs of producing fertilizer, and the resources that go into shipping and delivering produce to consumers.

Haynes, who is majoring in ecology and evolutionary biology with a certificate in environmental studies, has been working with Gauthier nearly since the project began. She has gardened since childhood, but her interest in sustainable agricultural was piqued by lectures and classes at Princeton such as ENV 200: "The Environmental Nexus." While she enjoys growing food, she also is now aware of the obstacles vertical farming poses.

"The maintenance of the farm for me has been the most challenging part. The biggest problem if you want to reproduce this system on a local scale is having the people to maintain it," Haynes said. "But with any new initiative, you need to keep improving it. It takes time and effort. We have to keep working to make the process better."

In August, Manolya Adan, a graduate student of Gauthier's based at Imperial College London, visited vertical farms around the United States. Her goal is to build a carbon-footprint model of the entire vertical-farm supply chain. Vertical farms are expanding rapidly, she said — in the past five years, the number in Asia has increased from 23 to 130. (A driving force is the advancement of light-emitting diode, or LED, technology that can provide ample light more efficiently than incandescent lightbulbs. In particular, Gauthier explained, LEDs now incorporate green light, which is essential for secondary plant metabolism.)

Vertical farms frequently tout the environmental benefits of their trade, but there's no publicly available information with which anyone can objectively verify those claims, Adan said. "Vertical farming holds a lot of promise, but I want to see what the actual benefit is in terms of reducing our environmental impact," Adan said. "We want the industry to do well and we need to be sustainable. It's about helping companies see what they themselves are doing and what they could do better."

Operational costs are a significant obstacle facing vertical, Gauthier said — more than 85 percent of vertical farms fail within two years. LEDs, labor and space are expensive, but there is no hard data on what drives these operations to close. Senior Rozalie Czesana, a Woodrow Wilson School of Public and International Affairs major, is preparing to examine the costs associated with running a small vertical farm, together with the feasibility of scaling them up to the community level. Her focus will be on "food deserts," or areas such as low-income urban neighborhoods that often lack sufficient access to fresh, healthy food.

Sophomore Seth Lovelace, a prospective mathematics major, works with Gauthier to analyze the level of individual nutrients in the solution they feed the plants using a technique called inductively coupled plasma mass spectrometry (ICP-MS). They can then adjust the amount of a certain nutrient based on what a plant uses most, as well as adjust the micronutrients that influence flavor, Lovelace said.

"We're really trying to bring metrics to the vertical-farming game. All of our team members are trying to get data so we can make the farm grow better, to help these plants thrive," Lovelace said. "Interdisciplinary research, when applied to any project, really enhances how the project moves forward. I think the access to this kind of research as an undergrad is amazing."

Gauthier welcomes the student interest. "I want undergrads involved because they are the next generation and the big burden of saving the planet will be on them," he said. "When they are familiar with this system and know it, they can start thinking outside of the box.

"The industry is growing for sure and it will be part of our lives in the future," he said. "That's what this project is about — understanding this system well enough to expand it." 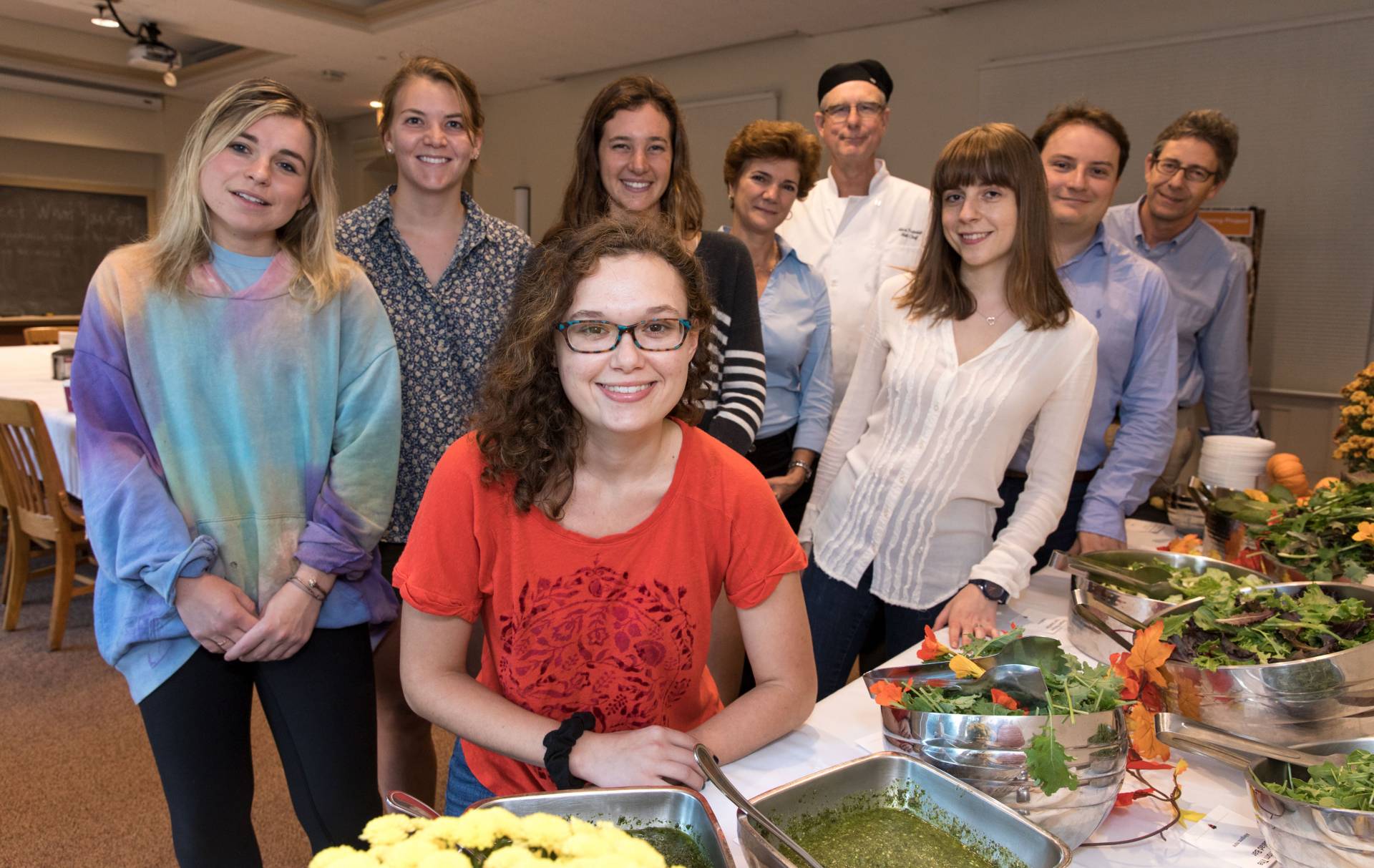