Senior Ruthie Schwab tends the summer squash in the organic garden students have created this summer north of Forbes College. With help from several University departments and funding from the High Meadows Foundation, the students have expanded from last year's 12-by-55-foot pilot plot to a 1.5 acre lot filled with a variety of vegetables and herbs.  Photos: Brian Wilson 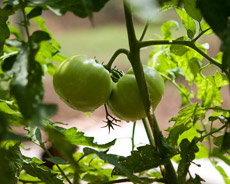 A small experiment in organic gardening last year has blossomed into a large plot of vegetables and herbs this summer with nurturing from a group of dedicated students, the Office of Sustainability and other departments, and the High Meadows Foundation.

The Garden Project was started by students last summer on a 12-by-55-foot piece of land south of Forbes College. This year, the University has provided the garden with a new home on a 1.5 acre lot north of Forbes and west of Alexander Street, sheltered from the road by a stand of trees.

Walking down the short incline into the garden is like entering a small park. What once was a fallow area with scrub brush was cleared last summer by students with the help of the University's grounds department. The garden, which covers nearly two-thirds of the lot, is neatly planted with rows of corn, summer squash, arugula, lettuce, cantaloupe, basil, oregano, rosemary, lemon balm, sage, thyme, beets, Swiss chard, turnips, carrots, snap beans, eggplant, tomatoes, peppers and more. A fence surrounds the plot to keep out pests.

The area also includes a storage bin for tools, a composting area and, near the perimeter in the shade, two large picnic tables. The latest addition, thanks to a recent effort, is a farm stand for washing newly harvested produce and providing instructions for volunteers.

But not for long. Schwab, who is serving as a Garden Project coordinator this year with junior Stephanie Hill, intend for the area to become a community learning space, where campus and local residents can become educated about sustainable food systems and their implications for human health and the environment. 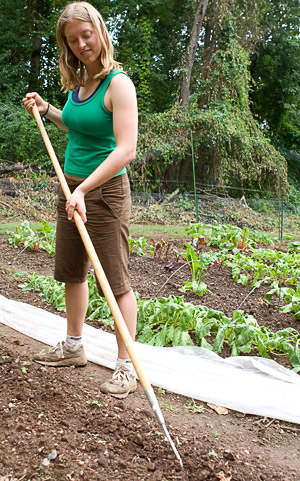 Junior Stephanie Hill and Schwab have been serving as this year's Garden Project coordinators, overseeing the planting and maintenance of the plot and working with student volunteers.

They already have planned an event for Wednesday, Sept. 24, featuring speakers from Pennington's Honey Brook Organic Farm, one of the largest community-supported farms in the country, and a cooking demonstration from a local organic pizza vendor.

They also hope to recruit more volunteers, especially from among freshmen and sophomores.

"We're thinking about how we can pass on this project to the next generation of students" said Hill.

The pilot project began last summer with Schwab and two other students working in positions funded by the Office of Sustainability and the Princeton Environmental Institute (PEI).

This year, the Garden Project received support from the High Meadows Foundation in the first round of initiatives funded under the University's new Sustainability Plan. In addition, the project has been backed by Forbes College, the Department of Ecology and Evolutionary Biology and various arms of the facilities department.

"Having a student-run organic garden on campus with its primary goal one of education about sustainable food systems is a tremendous complement to the University's sustainability goals," said Shana Weber, manager of the Office of Sustainability. "For one, it illustrates on a small scale the principles Dining Services is applying that affect all students on campus every day -- principles that stress local and sustainable production, as well as human and environmental health."

Hill, a politics major who is earning a certificate in environmental studies, has been on campus all summer working on the garden while also participating in a PEI research project to study Lake Carnegie and its ecosystem.

"I'm getting a chance to work with the community of scholars at Princeton, with the local community and with insiders in the field," Hill said. "I'm gaining quite a bit of perspective on what it takes to get a project like this off the ground. I'm cultivating a partnership with the Slow Food group on campus. In addition to the High Meadows funds, we're getting recognition and support from other places inside and outside the University." 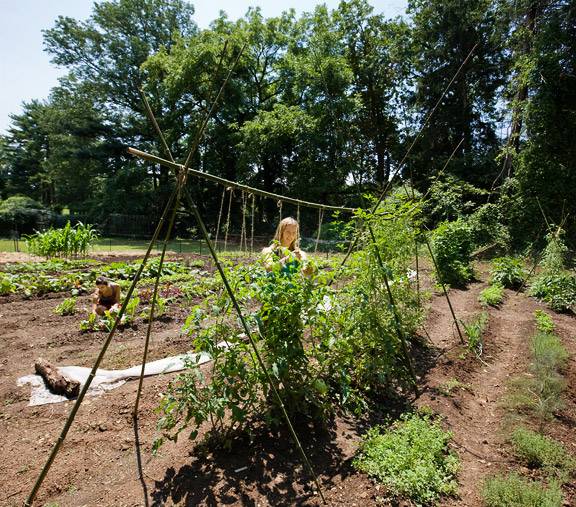 In addition to the garden, the lot includes two large picnic tables and a composting area. Schwab and Hill intend for it to be a community learning space, where campus and local residents can become educated about sustainable food systems and their implications for human health and the environment.

In addition to clearing the land, the grounds department, for instance, furnishes compost from its large piles of leaves gathered from various areas of the campus each fall. And Hill has earned an invitation to the Slow Food Nation conference in San Francisco Aug. 29-Sept. 1.

Schwab, who is majoring in ecology and evolutionary biology and earning certificates in environmental studies and visual arts, spent the spring semester participating in the University's tropical biology program in Panama before returning to the garden. 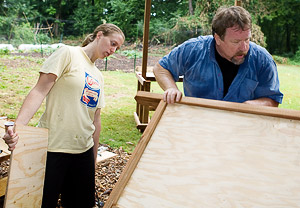 Bob Jones of Upland, Calif., spent part of the time while visiting his daughter at Princeton supervising the design and construction of a farm stand. Here, he shows Hill how the parts will fit together.

The two have been assisted throughout the summer by several student volunteers, who have helped plant, weed and harvest the crops. One member of that group, chemistry graduate student Casey Jones, recruited her father to supervise the design and construction of the farm stand when he was in town to celebrate his birthday in August.

Bob Jones of Upland, Calif., has developed an expertise in carpentry and gardening over the years and was happy to spend his vacation doing something he loves. "A good day is a day in the garden," he said.

Some of the materials and tools were provided by the University's carpentry shop. The stand has a sink for rinsing produce, trays to showcase recent harvests, and a bulletin board where Schwab and Hill plan to post a map of the garden and instructions about what work needs to be done. 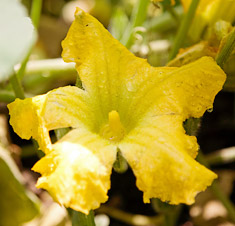 "People will be able to teach themselves about the different crops and varieties," Schwab said.

Those who work on the garden can prepare and eat the food they grow. Last year, the garden also provided produce for the Forbes College and Graduate College dining halls, a local organic pizza producer and cooking demonstrations at the farmers' market that takes place on Tuesdays on the Firestone Library plaza. This year, the garden coordinators have similar plans. They already have donated herbs to a local artisan ice cream maker, which, in turn, supplied treats for a "thank you" reception for those who have helped over this summer.