by the Office of Sustainability

This year marks the 10th anniversary of the founding of Princeton University's Office of Sustainability, the hub that supports, monitors and connects initiatives across campus focused on cultivating positive global and local impacts in the environment.

Led by founding director Shana Weber, the office responds to global challenges through investigating the campus as a scalable, solutions-based demonstration site. The office mission is to cultivate an ethos of sustainability on campus by bridging academics, operations and campus life. 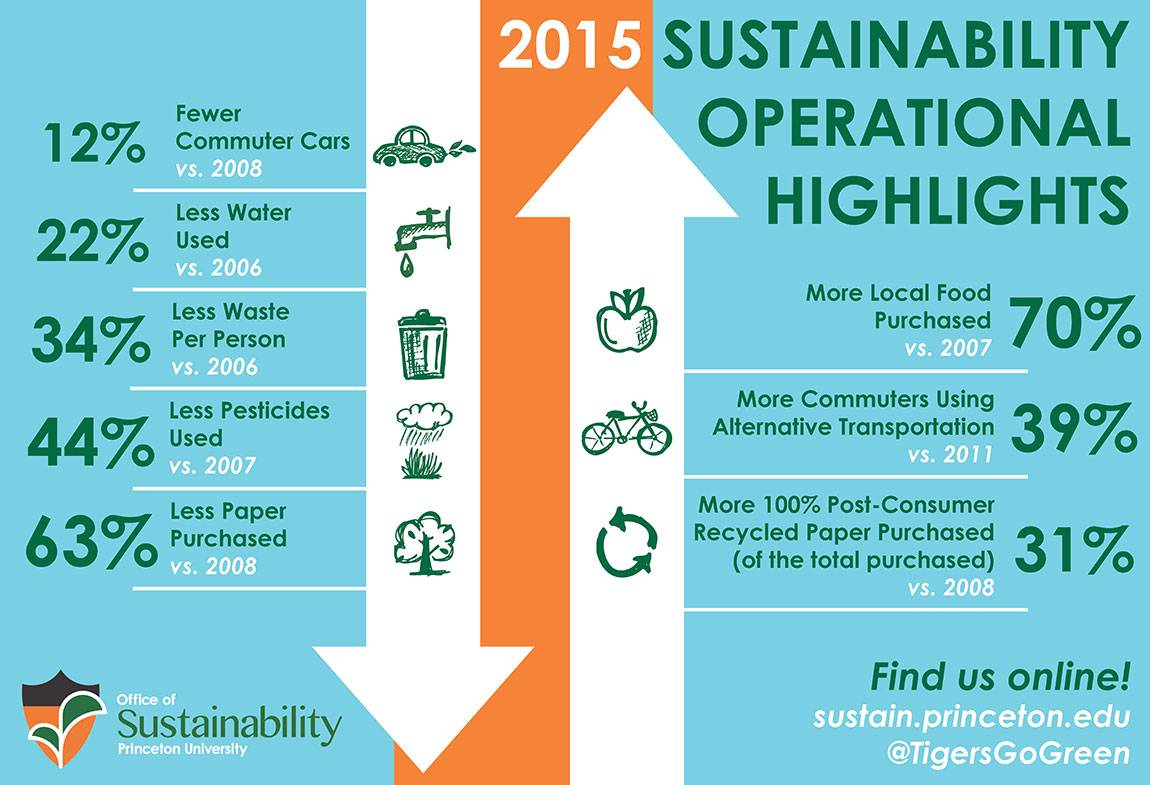 In accordance with Princeton's 2008 Sustainability Plan, the University has reduced waste and resource use, and increased recycling, local purchasing and alternative transportation use. (Graphic by Office of Sustainability)

Numerous faculty and student independent research projects, as well as student and staff initiatives, have been funded by the University, complementing the increasing number of sustainability-related courses and certificate programs offered by academic departments. The High Meadows Foundation Sustainability Fund was established in 2008 to help launch the plan's research, education and civic engagement goals, and has supported efforts such as water quality research on Lake Carnegie, green roof performance monitoring, materials studies, installation of a pilot indoor urban farming system, internships and solar picnic table design.

Today, the University continues to track progress on this ongoing effort while also evaluating its trajectory beyond 2020.

A renewed vision for sustainability will be rolled out in 2017 through the 2026 Campus Plan and through a holistic Sustainability Plan that encompasses the campus planning process as well as ongoing operational, social and academic dimensions. Together, these efforts will define the University's desired local and broad sustainability impacts. Those impact metrics will be a combination of qualitative and quantitative measures, with unanswered questions identified as ideal for campus-as-lab investigation.

Said Weber: "The next Sustainability Plan more fully acknowledges the campus as a 'living laboratory' and embraces the idea of sustainability as service to local communities and the world. It will emphasize the opportunity to link teaching and research in all disciplines with the campus social and operational systems to explore sustainable solutions."

The Office of Sustainability and some of its integral campus partners are celebrating the office's 10th anniversary on Friday, Oct. 21. The celebration, open to the University community, is preceded by a scavenger hunt hosted by the Andlinger Center for Energy and the Environment, and includes educational features about sustainable event planning, sustainable food, and live demonstrations of student sustainability research conducted on campus such as the rammed earth structure, a solar picnic table and an electric car. 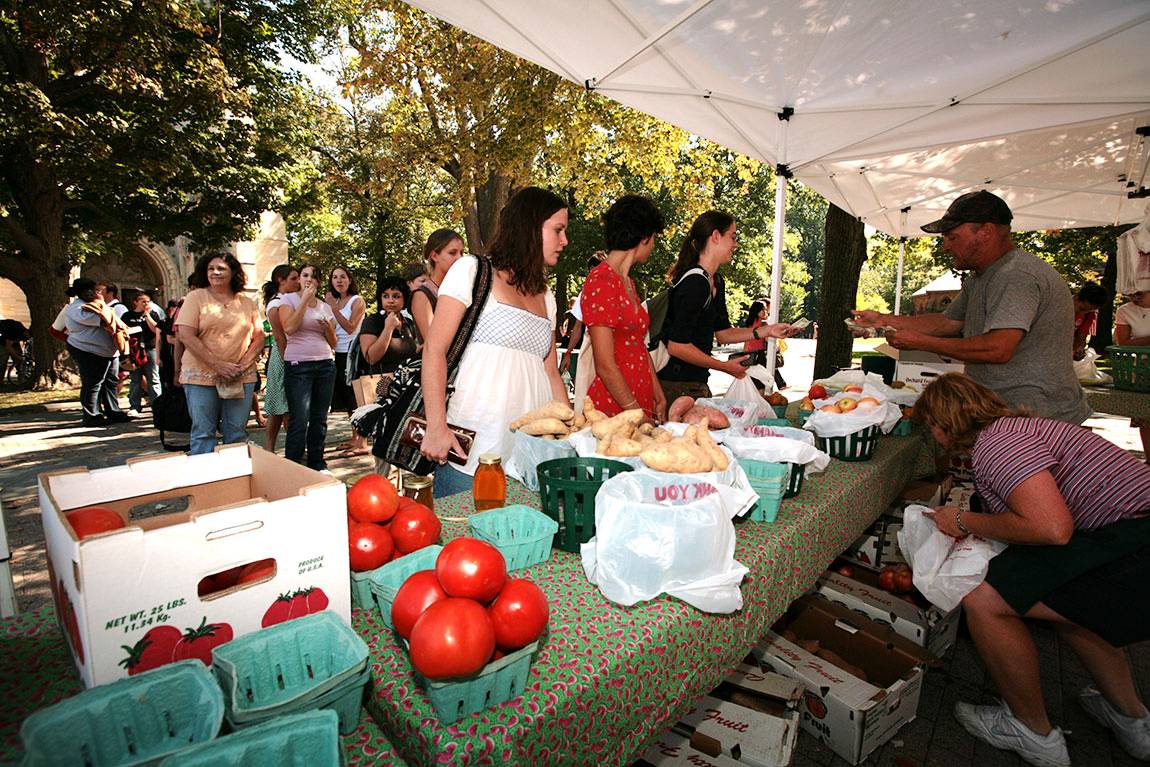 In the fall of 2006, Ruthie Schwab, then a Princeton sophomore, spearheaded the Princeton Garden Project at Forbes College. The mission of the project, now made up of two student-run organic gardens, is to educate the campus and community about the American food system and its implications for the environment, health and culture, and the future.

The student-organized campus farmers' market, considered the first truly student-run market in the country, was launched in 2007 by Kathryn Andersen of the Class of 2008 and Schwab. The market continues to be held each spring, and is supported by the Office of Sustainability, Office of Community and Regional Affairs, Office of the Dean for Undergraduate Students, Campus Dining and rotating funders. 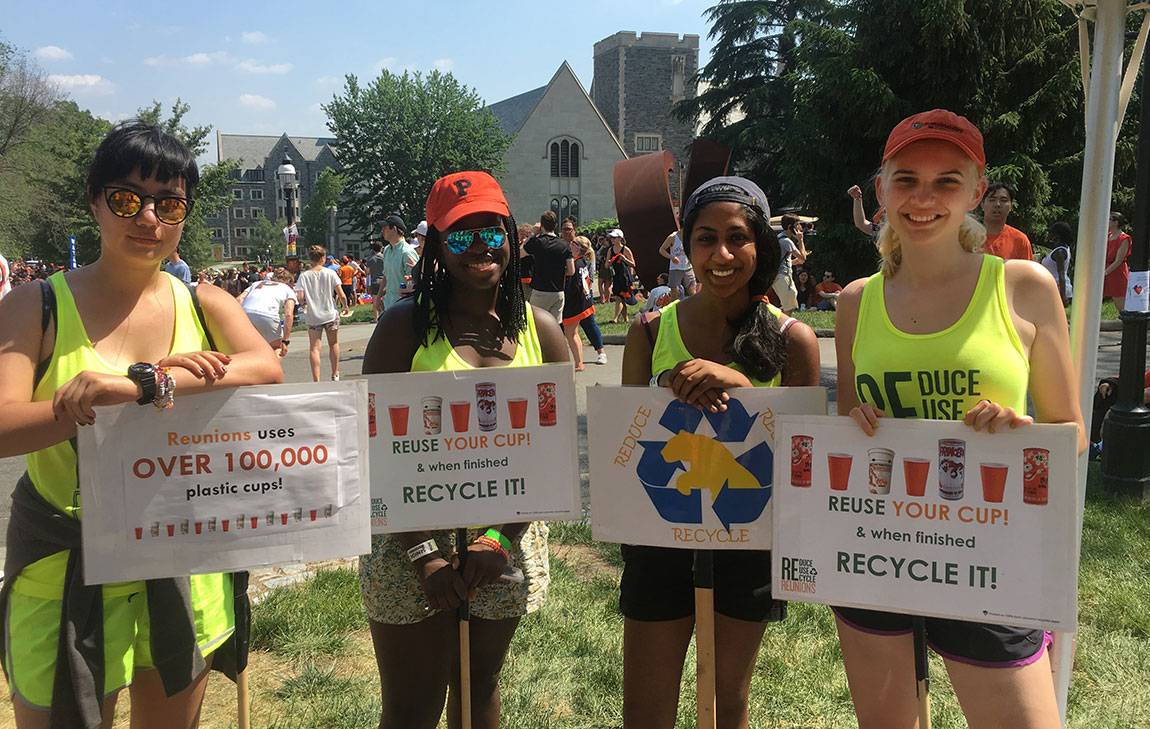 EcoReps march in the 2016 P-rade at Reunions to raise awareness about recycling. (Photo courtesy of the Office of Sustainability)

The student EcoReps have worked with the Office of Sustainability since 2008 to make strides toward greening Reunions. In 2016, the EcoReps collected 900 #5 plastic cups and 3,825 #6 plastic cups, which were upcycled into various products by local companies.

Each fall, staff from across campus volunteer to participate in a yearlong Sustainability Ambassador training program and subsequently serve as sustainability representatives. The program currently has over 75 members representing more than 45 campus offices or departments. 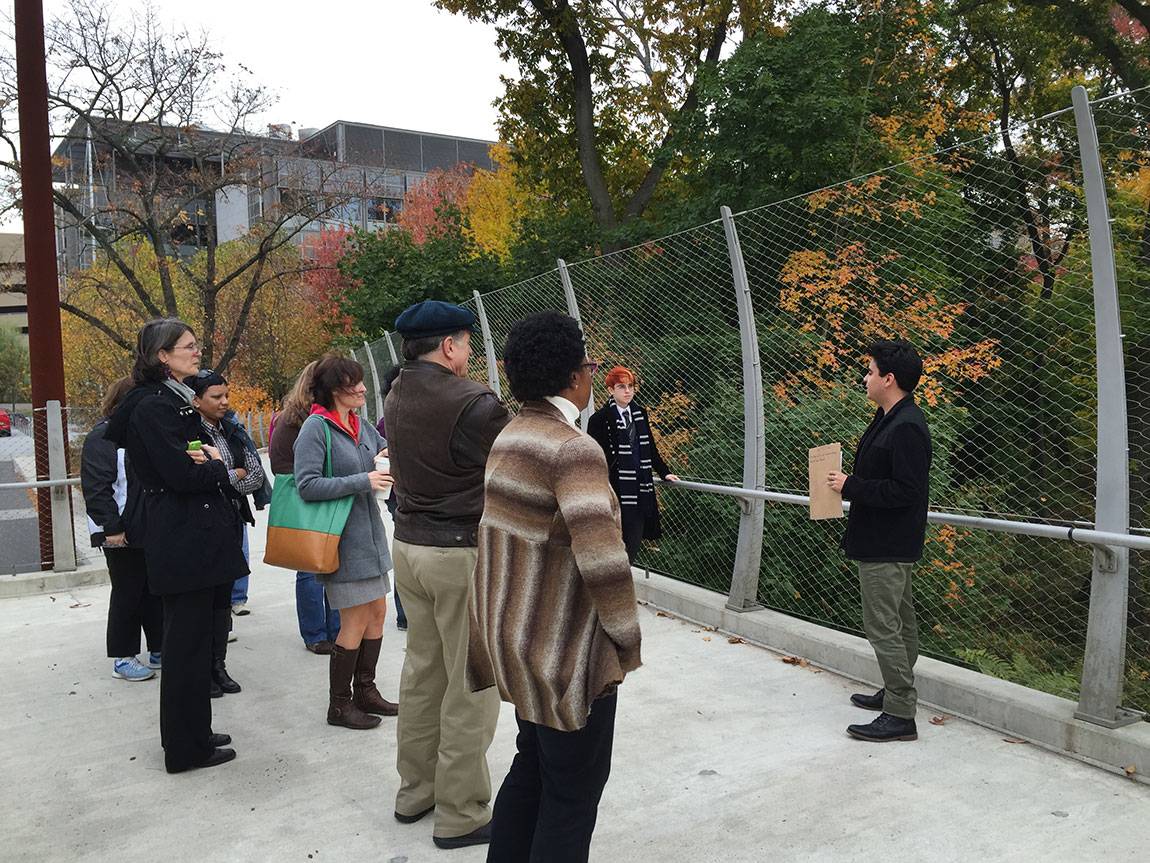 Christian Rivera of the Class of 2014 leads a Green Tour and stops at Streicker Bridge, which provides a walkway over Washington Road and doubles as a research project in material durability. Hundreds of sensors are integrated into the structure to take measurements of temperature, strain and vibration in the concrete. (Photo courtesy of the Office of Sustainability)

The Office of Sustainability began offering campus Green Tours in 2010, highlighting features ranging from an organic kitchen garden to a green roof. Tours are given during Princeton Preview, during Reunions, and by request. In addition, an online campus Green Tour is available.

Since 2011, all six residential colleges' dining halls have been tray-free. The change was initiated by Green Princeton, which presented a study demonstrating how 25 other colleges and universities had reduced their food waste by up to 30 percent and saved up to $5,000 from reduced water and energy usage annually.

The GreenSpace Kiosk was installed at Frist Campus Center in fall 2012. It provides an interactive space to showcase sustainability initiatives at Princeton through permanent and rotating exhibits.

In 2013, Green Princeton collaborated with Building Services to launch a mixed recycling pilot. The pilot, which included a door-to-door communications campaign, resulted in a 20 percent increase in recycling. Based on the success of the student study, the University is fully transitioning to a mixed recycling program. 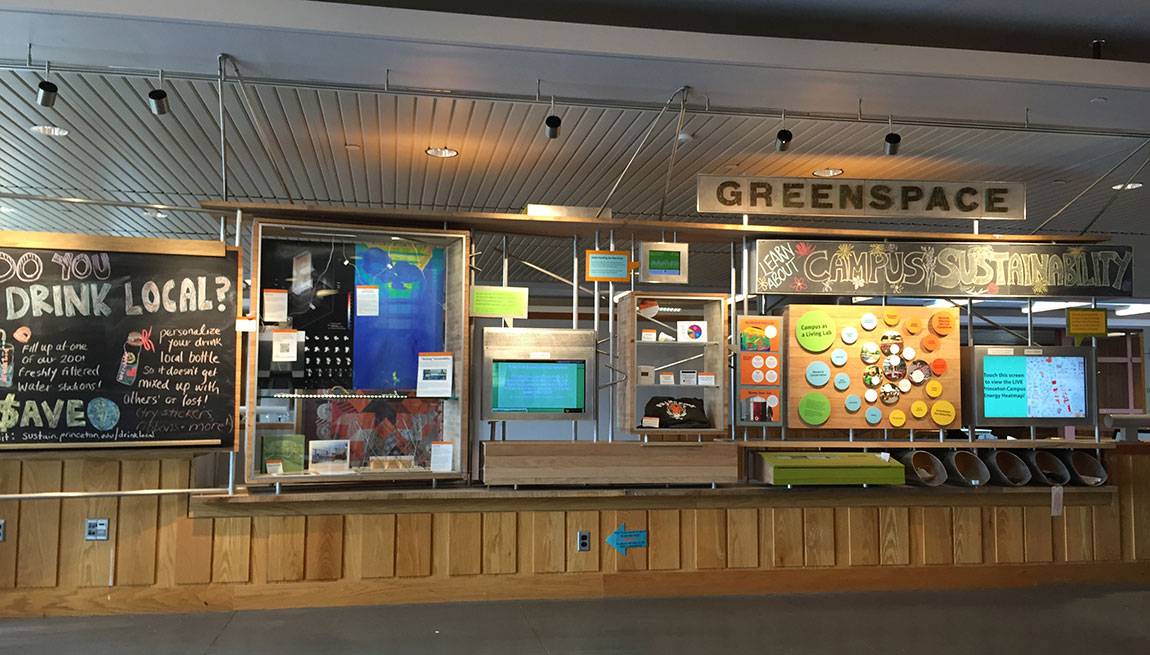 GreenSpace, an interactive kiosk at Frist Campus Center, has featured exhibits on sustainable fashion, the intersection of the environment and comedy, and mapping Princeton's physical growth, its sustainability efforts and its students and alumni around the world. (Photo courtesy of the Office of Sustainability)

The Office of the Dean for Research launched a Campus as a Lab Innovation Fund in 2014 for faculty research in sustainability, energy and the environment. This program supports bold new ideas that involve the use of the campus as a laboratory for scientific, engineering, humanistic, artistic or social science research.

Between 1997 and 2015, all food scraps from dining halls as well as food preparation scraps at Frist Campus Center were used as animal feed or composted in the region. As of 2015, food scraps are composted by the AgriArk company, which processes them into agricultural soil amendments at a local facility in Hopewell, New Jersey. 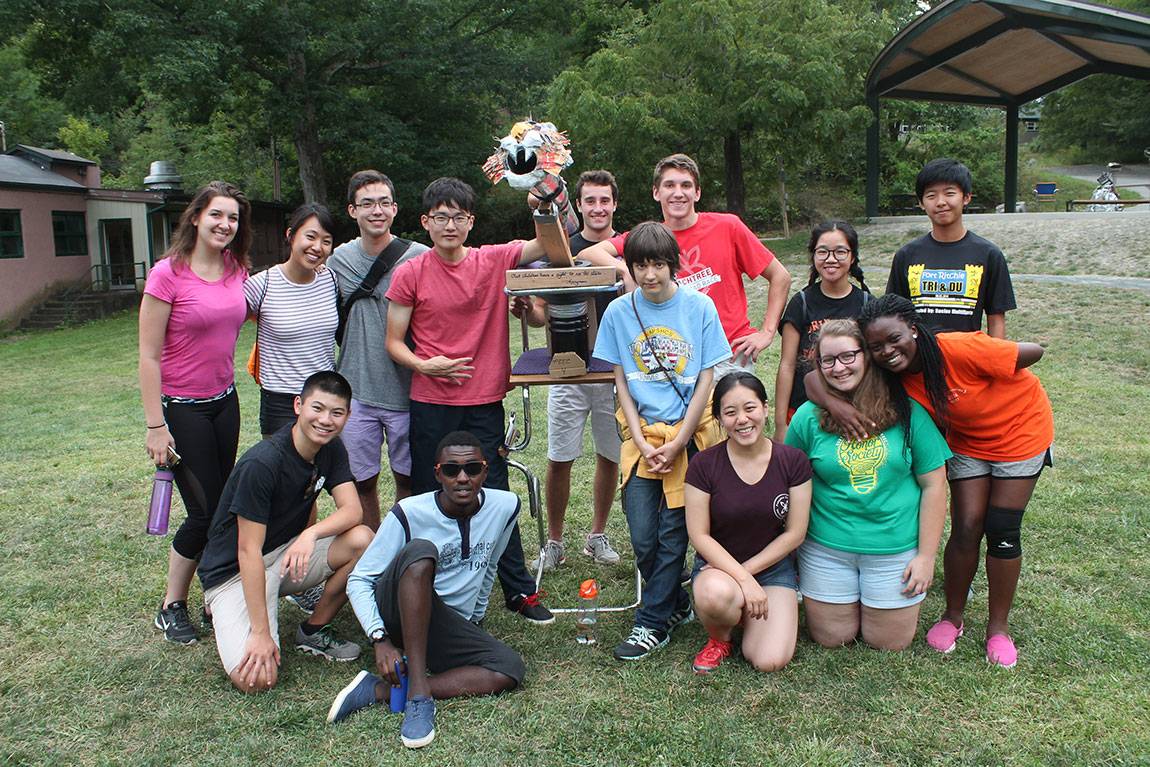 Students who explored service and sustainability at the Pocono Environmental Education Center during Community Action pose with the winning "TigerScope" recycled art project, now on display in Frist Campus Center. (Photo courtesy of the Office of Sustainability)

2016: Partnership with Community Action at the Pocono Environmental Education Center

This September, the Office of Sustainability collaborated with the Pace Center for Civic Engagement to develop and support a curriculum for a new Community Action experience at the Pocono Environmental Education Center (PEEC), where students experienced sustainability education and action as service.