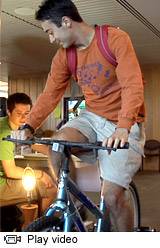 Watch a video on Princeton's sustainability program, including work by students, faculty and staff.

In its first report since adopting a Sustainability Plan in February 2008, Princeton University states that on-campus greenhouse gas emissions have decreased for the first time since the University's energy-efficient cogeneration plant was installed in 1996.

While the decrease in carbon dioxide from July 2008 to July 2009 has been modest at nearly 1 percent, "it is a significant step in the right direction," according to the report, considering that the University added nearly 164,000 square feet to its physical plant during the same time period. 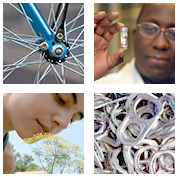 Other highlights in the Report on Sustainability 2009 range from multimillion-dollar outlays to improve energy efficiency and efforts to define and achieve benchmarks in building design and purchasing, to accomplishments in food buying, recycling and other forms of resource conservation as well as growth in faculty research, environmental courses and student activity.

"What is most striking about this report are the many initiatives that have been undertaken and the impact they are beginning to have in achieving the University's ambitious sustainability goals," said President Shirley M. Tilghman. "But just as important is the report's emphasis on what still needs to be done and on the strategies now in place to make continued progress in the years ahead."

Princeton's plan is distinctive because of its comprehensiveness and its integration with the University's commitments to teaching, research and civic engagement.

"From the start the University decided to manage this ambitious effort to significantly decrease our impact on the environment with the help of multiple academic and administrative departments across the campus coordinated by our sustainability group," said Executive Vice President Mark Burstein. "Culture change is hard to accomplish, but with the leadership of many students, faculty and staff, we have obtained significant progress over the past two years and even more importantly gained momentum to reach our goals."

He added, "In these economic times it is also very helpful that most of our efforts also decrease the operating cost of the University."

In addition to its comprehensiveness, another defining feature of the plan is the University's commitment to reduce its carbon dioxide emissions through direct local reductions rather than the purchase of "offsets." Offsets include investment in emissions-reduction activities such as planting trees in this country or abroad -- a feature frequently included in other sustainability plans.

The report states that Princeton is investing more than $40 million in the next 10 years to reduce overall utility usage on campus by at least 25 percent, in part by improving the efficiency of the cogeneration plant and the buildings it serves. These facilities account for approximately 85 percent of the University's emissions.

Some of the improvements already made include using geothermal technology at the Lawrence Apartments graduate housing complex and at the student social venue Campus Club; installing photovoltaics at the Research Collections and Preservation Consortium (ReCAP) building on the University's Forrestal Campus about three miles north of the central campus and on Princeton's new Chemistry Building; and generating more efficient energy with new backpressure turbines on steam lines, the equivalent of heating, cooling and electrifying nine dorms the size of the 93,356-gross-square-foot Little Hall dorm.

The report notes that all new construction and major renovations are being designed with the goal of pushing beyond 30 percent less energy cost than a standard off-campus building. This goal is a significant challenge, especially for laboratory buildings, such as the new Chemistry Building slated for completion in 2010. However, that building -- as well as the redeveloped Butler College student residential complex that opened this fall and the Sherrerd Hall academic building that opened in fall of 2008 -- all meet the equivalent of the U.S. Green Building Council's LEED (Leadership in Energy and Environmental Design) Silver certification, with strong energy efficiency performance.

After operation of the physical plant, the second largest source of campus emissions is transportation. Goals in this area of the Sustainability Plan are decreasing by 10 percent the number of cars commuting to campus by 2020 and reducing emissions related to the campus fleet.

According to the Sustainability Report, some 300 campus community members have participated in new Transportation Demand Management incentive programs to use public transportation or car pools.

The 14 campus shuttle buses now run on 20 percent biodiesel, and a replacement program calling for low-emission vehicles in the campus fleet is in progress. Six low-speed electric vehicles have been purchased to replace internal combustion engine utility vehicles, joining a zero-emission fleet of utility and golf carts on campus. The University also is working to reduce its overall fleet of vehicles.

Coming up with ways to measure sustainability and then collecting those measurements has been one of the challenges faced by those implementing the Sustainability Plan, according to Shana Weber, manager of the University's Office of Sustainability.

"Whenever we start a new sustainability initiative on this campus, we strive to know what the pre-conditions were so that we can determine if we're having meaningful impact," she said. "We incorporate into everything we do this idea of tracking our metrics over time -- following the data and using it to leverage our performance to the next level."

For example, the University has retrofitted all of its residence halls with low-flow fixtures to conserve water. Athletic and administrative buildings are in the process of being retrofitted. The estimated water use decrease with these fixtures is 25 percent, and the next step will be to conduct a systematic audit of water and sewer bills to verify these water use reductions.

The University also is increasing the amount of water retained for environmentally beneficial purposes on campus. In Butler Memorial Court at Butler College, a 5,000-gallon rainwater collection cistern is being used to supplement irrigation water. The new Chemistry Building under construction features a 12,000-gallon rainwater collection cistern that will provide capacity to flush toilets in the building.

Also in the area of resource conservation, the report notes that that University annually saves 118 tons of wood products and the emission of 79 metric tons of CO2 through its 100 percent post-consumer recycled paper policy. A total of 86 percent of offices complied with this Purchasing Department policy in the 2009 fiscal year, and the goal is to achieve 100 percent compliance.

Dining Services is working to achieve its goals by increasing sustainable food purchases from 36 percent in 2007 to 60 percent in 2009. It also has prioritized local foods, purchasing 45 percent from within 200 miles in 2009, up from 27 percent in 2007.

Grounds crews currently compost and reuse 100 percent of campus landscape trimmings on site, according to the report. Building projects completed in the past five years and confirmed projects in the near future will result in the transition of more than 50,000 square feet (1.15 acres) of impermeable surface area into land that will allow water infiltration.

The University is planting more than 10 acres of woodland, increasing low-maintenance wooded areas by more than 10 percent. For example, existing woodlands south and west of the new Chemistry Building will be strengthened by removing invasive species and planting shrubs and 180 new trees. Between Washington Road and the new Chemistry Building at the south end of campus, the Washington Road stream will be restored to more sustainably handle stormwater runoff.

The area where the comprehensiveness of Princeton's Sustainability Report is perhaps most evident is in the research, education and civic engagement section.

"Investing in faculty research and teaching -- including initiatives that engage the campus as a laboratory for new ideas and encourage civic engagement -- is the most effective way that Princeton can use its resources to address sustainability issues such as the problem of global climate change," the report states.

The report includes many examples of the ways Princeton faculty members -- and their students -- are conducting research in climate science, energy technologies, alternative fuels, mitigation strategies and climate policy as well as contributing to the international dialogue on a new energy future, climate negotiations and global sustainability. For example, in July 2009 University scientists announced they had devised the "Princeton Plan," a new way of dividing responsibility for carbon emissions among countries. The plan is being actively considered for use at the December 2009 United Nations Climate Change Conference in Copenhagen.

Alumni also have encouraged teaching, research and civic engagement in sustainability. A High Meadows Foundation gift of term funds over four years was given to fund initiatives that support goals set forth in that section of the Sustainability Plan. Co-founders and trustees of the foundation are Carl Ferenbach, a 1964 Princeton graduate who is a member of the University's Board of Trustees, and his wife, Judy. International business executive and 1952 alumnus Gerhard R. Andlinger donated $100 million to create the Gerhard R. Andlinger Center for Energy and the Environment within the School of Engineering and Applied Science.

Student interest in academic and extracurricular activities connected with sustainability is climbing. There has been more than a 150 percent increase in students receiving environmental studies certificates since 2002. Among a broad pool of environmental course offerings, more than 50 address sustainability by exploring some aspect of the intersection between the environment, economics and society. And 40-plus summer sustainability internships were offered locally and internationally in 2009. There are currently 11 student environmental groups on campus representing a range of sustainability issues; eight have come into existence since 2004.

To kick off the Sustainability Plan, Princeton hosted an open house on Sept. 17, 2008, in the Frist Campus Center. The five-hour event, titled "Sustainability: Introducing Princeton's Green Initiatives," engaged the crowd of about 900 from the campus and local communities in discussions, demonstrations and sign-ups concerning student, faculty and staff efforts.

"I'm delighted by the campus collaborations that are starting to emerge," Weber said. "For example, Eileen Zerba in the Princeton Environmental Institute has initiated a green roof study on Butler College. It took collaboration between faculty, staff in the facilities department and students to make this happen. What we're going to get out of it is real-time information about the performance of these vegetated rooftops compared to Princeton's current standard. That's an example of the kind of intersection between academics, research, students, faculty and staff that I am very excited to see. It's the model we're looking for that could leverage broader cultural shift."

Carol Dreibelbis, a junior anthropology major who is pursuing a certificate in environmental studies, already has observed a shift in interest on campus.

"In my two short years at Princeton, I have noticed an increased awareness of environmental issues among students -- especially those who might not have come to Princeton with an environmental mindset," she said. "I've taken a good number of ENV classes, and I am always surprised to see the wide range of academic disciplines represented by the students in my classes."

Dreibelbis, who served as an intern in the Office of Sustainability this past summer and is this year's co-president of the student organization Greening Princeton, added, "It is exciting to see our growing membership, as well as the continued success of some of our events and the newly expanded Garden Project. The Sustainability Plan has helped unify student and University efforts to achieve certain goals: Everything from tray-free dining to the Farmers' Market has been made possible by University-supported student initiatives."

The Sustainability Plan has been a campus-wide effort since its beginning in 2007. Working groups of the Princeton Sustainability Committee -- which is composed of faculty, staff and students -- proposed the plan and now benchmark sustainability performance across University operations, teaching, research and student activities.

"There is a community that has grown up around developing and carrying out the plan," Weber said. "Students, faculty and staff were all involved in defining what we're now committed to as an institution. This report represents the start of an ongoing process that will continue to require a great degree of community-wide involvement."