Princeton University's greenhouse gas emissions have remained below 2008 levels for three years, and campus water usage and landfill waste each have declined by 13 percent since 2006. These key achievements are noted in the University's third annual Sustainability Report, published online Nov. 9. 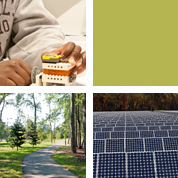 According to the report, the University continued to make significant progress on sustainability measures in the past year and is seeking to accelerate efforts to bridge the areas of operations and academics in sustainability problem-solving.

"One feature that sets apart the Sustainability Plan that Princeton adopted in 2008 is our decision to mitigate our environmental impact solely with campus-based investments in efficiency and culture change," Burstein said. "We have a tremendous opportunity to use the physical campus as a testing ground for the benefit of students and researchers as we seek to reach the Sustainability Plan goals."

The Sustainability Plan has been a campuswide effort since the beginning of its development in 2007. Working groups of the Princeton Sustainability Committee — which is composed of faculty, staff and students — proposed the plan and now benchmark sustainability performance across University operations, teaching, research and student activities. Their reports are incorporated into the online publication.

In the next phase, the Office of Sustainability, which coordinates the plan's implementation, will be collaborating with the working groups and the campus community to integrate the plan more fully and swiftly into the life of the University, according to Shana Weber, manager of the office and co-chair of the committee.

"We've been in implementation mode since 2008 and have a fairly solid grasp of the direction we need to go on the operational end of things," she said. "We've had very productive collaborations with faculty members and students, but we want to try to reach out and develop more relationships across operations and academics so that we can accelerate this process as a community."

The report notes that on-campus greenhouse gas emissions have declined by approximately 2.6 percent since fiscal year 2008 — the year emissions declined for the first time since the University's energy-efficient cogeneration plant was installed in 1996. This drop has taken place even with the addition of more than 560,000 square feet to the University's physical plant in the same time period.

From 2010 to 2011, emissions deviated slightly from the annual reduction trend, rising by 1.5 percent to approximately 111,700 metric tons. The increase is likely due to the opening of the new Frick Chemistry Laboratory while the old chemistry building at 20 Washington Road, which will be converted to a less energy-intensive nonlaboratory building, was still operating. The rise also is attributed to a significant increase in campus heating and cooling demands due to more extreme weather (more cold or hot weather for longer than average periods of time) over the past year.

"Our experience this past year demonstrates what a considerable challenge it is to meet our goal of decreasing carbon dioxide emissions to 1990 levels — 95,000 metric tons — by 2020 through direct local reductions with no purchase of market 'offsets' and within the constraints of our growing space needs," Burstein said. "We anticipate that campus expansion will require even greater improvements in energy efficiency to achieve the net reductions stated in our plan."

One project the University began implementing this fall is a 5.2-megawatt solar collector field on 27 acres it owns in West Windsor Township. The system, comprising 16,500 photovoltaic panels, is expected to generate 8 million kWh per year — enough to power the equivalent of 700 homes, or enough to meet 5.5 percent of the total annual campus electrical needs while avoiding about 3,000 metric tons of CO2 per year.

Many of Princeton's sustainability efforts are resulting in cost savings, according to the report. Under an Energy Master Plan established in 2008, the University is investing $45 million between 2009 and 2017 in other energy-savings projects in order to achieve $8.5 million in annual savings. In 2010-11, the University spent about $477,500, resulting in savings of about 1,000 metric tons of CO2 and $193,000 in energy costs. Since the master plan was established, the University has invested $5.3 million in energy-savings projects, resulting in annual savings of about $1.7 million in energy costs and 10,000 metric tons of CO2.

The campus as a living laboratory

About 20 percent of graduating seniors in 2011 participated in the Princeton Environmental Institute's undergraduate program during their four years at Princeton, pursuing certificates, coursework, internships and independent research.

Danny Growald, a 2011 alumnus who majored in ecology and evolutionary biology, earned a certificate in environmental studies and was the undergraduate chair of Princeton Students United for a Responsible Global Environment (SURGE), offers this account of his Princeton experience on the Sustainability Report website: "PEI (the Princeton Environmental Institute) and the environmental studies program took me from the fundamentals of climate science my freshman year, to cutting-edge research on biofuels in Costa Rica for my senior thesis. The blend of world-class professors, passionate students and opportunities for hands-on learning that the programs bring together is what makes Princeton truly extraordinary."

Outside the classroom, the Office of Sustainability has coordinated biweekly Princeton Environmental Network meetings for all leaders of environmental- and sustainability-focused student clubs and organizations since 2006. These groups represent more than 1,000 Princeton students.

In fall 2010, more than 40 campus and community groups staffed interactive displays and demonstrations to showcase their sustainability efforts to an audience of more than 500 participants at the second biennial Sustainability Open House for the campus and local community. The event was organized by the Office of Sustainability partnering with several other campus offices.

Michael McKay, vice president for facilities, said this type of collaboration exemplifies what the University seeks in the new phase of the Sustainability Plan implementation.

"For me, one of the great things about working at Princeton is that the people here combine their passion with a commitment to action," McKay said. "For faculty and staff as well as students at Princeton, that passion and commitment can combine to produce amazing results, especially when the work that occurs on the campus is leveraged locally."

At a recent workshop to explore operational and academic partnerships, Elie Bou-Zeid, an assistant professor of civil and environmental engineering, described some of the benefits for students and researchers.

"Using the campus as a lab creates demonstration projects so undergraduates will have research opportunities, helping us further integrate research and teaching," said Bou-Zeid, who recently was named faculty co-chair of the Princeton Sustainability Committee. "It offers the researchers quick and easy access to their experiments. And it offers researchers the opportunity to get involved at the design stage," pointing to such examples as research devices installed during construction of the Butler College green roofs and Streicker Bridge over Washington Road.

In an effort to jumpstart more collaborations on junior papers, senior theses and graduate study, the Office of Sustainability has posted a list of possible research topics on its website. Topics range from exploring the role of art in communicating sustainability and inspiring behavior change to assessing the feasibility of local offshore wind power as part of the University's renewable energy portfolio.

"The problems our planet faces are complex and intertwined, involving not only science and engineering obstacles to overcome, but also requiring changes in human behavior, economic analyses and thoughtful policy," Emily Carter, founding director of the University's Andlinger Center for Energy and the Environment, says in the introduction to the Sustainability Report.

"The Andlinger Center for Energy and the Environment, in partnership with many entities at Princeton including the Office of Sustainability," she adds, "is engaging students, postdoctoral fellows, staff and faculty in moving locally and globally to a sustainable way of life."