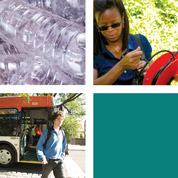 Last year, emissions declined for the first time since the University's energy-efficient cogeneration plant was installed in 1996 by a modest amount at nearly 1 percent. Emissions are now down by 2.5 percent since 2008, despite the addition of more than 360,000 square feet of building space.

That finding, along with decreases in water consumption, paper purchases and landfill waste, and increases in opportunities for faculty and students to be in classes, conduct research and get involved in efforts concerning the environment, is part of the 2010 Report on Sustainability released Monday, Nov. 15.

In connection with the online publication of the second annual report, the University will showcase its latest green initiatives at an open house from 3 to 7 p.m. Tuesday, Nov. 16, in Chancellor Green. The event, which also will include community participants, will feature interactive displays and demonstrations.

The report describes progress toward goals since the University adopted its Sustainability Plan in February 2008, and it looks ahead to the short-term and long-term future. The first report was released in November 2009.

According to Executive Vice President Mark Burstein, three features set apart Princeton's Sustainability Plan: its commitment to decreasing carbon dioxide emissions to 1990 levels by 2020 through direct local reductions with no purchase of market "offsets"; its comprehensiveness; and its integration with the University's commitments to teaching, research and civic engagement.

"Princeton's Sustainability Plan relies exclusively on local initiatives to reach its carbon dioxide mitigation goal," he said in the introduction to the report. "The University's existing infrastructure was already very efficient, so we knew that achieving this goal would be a challenge. Thanks to the implementation of new technology, we can describe real progress toward the goal, as quantified in this report, as well as plans for future progress.

"These efforts turn our campus into a sustainability laboratory that ties directly into our academic work in the environmental areas," he added. "Not only has the University's environmental impact significantly decreased over the past three years, but we are also educating tomorrow's leaders through direct campus activity as well as teaching and research."

An added benefit is that many of the sustainability efforts also have resulted in cost savings.

Michael McKay, vice president for facilities, said, "We have found the University's Sustainability Plan provides opportunities for both good environmental stewardship and strong financial management. Princeton has realized recurring savings from almost all of the initiatives implemented to date."

The Sustainability Plan has been a campuswide effort since the beginning of its development in 2007 -- the benchmark year used to assess progress. Working groups of the Princeton Sustainability Committee -- which is composed of faculty, staff and students -- proposed the plan and now benchmark sustainability performance across University operations, teaching, research and student activities. Their reports are incorporated into the online publication.

"This progress report reflects the collaborative spirit of the sustainability endeavor at Princeton," said Shana Weber, manager of the Office of Sustainability, which coordinates the process. "That enthusiasm to take on challenges is helping to drive innovation, not only in technology but also in the social and economic aspects of this transformative effort."

The University's goal is to reduce carbon dioxide emissions to 1990 levels (95,000 metric tons) by 2020 -- 18,000 metric tons less than the current amount. Princeton is seeking to achieve reductions through conservation, application of energy-saving technologies, renewable energy generation and behavior change. The University is exploring the idea of installing a solar collector field on some of its lands in West Windsor. If this project proves viable, the field could supply up to 5 megawatts of renewable electrical energy to the campus, further contributing to the reduction in its carbon footprint.

The report states that Princeton is investing $45 million between 2009 and 2017 to reduce overall utility usage on campus by at least 25 percent, in part by improving the efficiency of the high-performance central cogeneration plant and the buildings it serves. These facilities account for approximately 85 percent of the University's emissions. The initiatives are being coordinated through an Energy Master Plan.

In 2009-10, the University spent $4.3 million on energy conservation projects, including recovering more heat from the exhaust at the cogeneration plant, replacing steam traps in the distribution system and improving lighting. These changes resulted in savings of 9,000 metric tons of CO2 and $1.5 million in avoided energy costs.

The goal is to achieve $8.5 million in annual savings and 65,000 metric tons of annual reductions in CO2 emissions. Reducing emissions by this magnitude will allow Princeton to approach its 2020 reduction goal while expanding square footage, according to the report. Under the Energy Master Plan, the University increased its electricity usage by only 3.2 percent during the last two years, despite the growth on campus.

One particularly innovative application this year was the installation of high-efficiency self-closing fume hoods in the new Frick Chemistry Laboratory. Research labs on the upper three floors of the building feature 200 of these fume hoods equipped with automatic sash closers that reduce both air supply and exhaust requirements. This was one of the first large academic installations in the country of the energy-saving devices.

When Princeton adopted the Sustainability Plan, 30 percent of the University's strategies for reducing greenhouse gas emissions were "to be discovered." Last year, an additional 9 percent (or more than 1,200 metric tons of CO2) was determined. A good part of this gap was filled with the installation of new network software by the Office of Information Technology that allows office computers to "sleep" when not in use, with no loss of backup functions. Through this program, the University has saved about 1,529,000 kilowatt-hours, or $134,534 annually.

Other emissions-reduction efforts include designing all construction and major renovation projects to be 30 to 50 percent more energy efficient than a comparable off-campus building; replacing vehicles in the campus fleet with electric or hybrid models (41 percent of vehicle purchased since 2007); and encouraging campus community members to join their 230 colleagues who participate in Transportation Demand Management incentive programs such as car pooling and riding mass transit.

Some of the key achievements cited in the report are:

Another highlight comes from an academic study in which faculty and students monitor real-time performance data from Butler College, where more than half the buildings have green roofs. Eileen Zerba, a senior lecturer in ecology and evolutionary biology who is leading the High Meadows Foundation grant-funded project, provided data for the report that indicate the Butler College green roofs are demonstrating a more than 60 percent reduction in peak stormwater runoff, compared to conventional roofs. In addition, with better than anticipated thermal properties, the Butler green roofs are expected to reduce expenditures for heating and cooling, according to the data.

Zerba and her students also are featured in photos and a story linked from the report about their work sampling and analyzing water from the Washington Road stream, which flows into Lake Carnegie. The stream is being restored to sustainably handle stormwater runoff as well as the everyday flow.

"Our principle strategy is to gather baseline data before initiating major University innovations to protect campus water resources and then track the effectiveness of sustainable practices," Zerba explained in the story.

The report outlines progress in the area of research, education and civic engagement through broader interdisciplinary participation in research and problem solving, artistic expression and communications relating to sustainability, better connections between faculty and graduate student research and undergraduate education on sustainability, and more student research opportunities in this field.

Some of the key achievements cited in the report are:

Jessica Hsu, a 2010 Princeton alumna, is quoted in the report about her experiences producing stories in the SECN and co-editing the "Guide to Living Green at Princeton."

"As a Green Guide intern, I researched small steps the Princeton community could take to be more sustainable and, furthermore, what the University at large was doing for sustainability in research and in practice," said Hsu, who is now a master's student in civil engineering-green design at Carnegie Mellon University. "I would strongly encourage current Princeton students to take advantage of the Office of Sustainability's resources and staff. The growing department is making great headway on campus. It provides funding and support for a variety of activities, all of which are very hands-on. Students are encouraged to show innovation, initiative and creativity and will find immediate rewards in the work they do."