Control systems operator Michele Connell works in the University's Energy Management Center to help maintain campus energy systems. The center, located in the MacMillan Building, is at the hub of aggressive efforts to limit energy usage and costs in buildings across campus, supporting Princeton's comprehensive Sustainability Plan to reduce carbon dioxide emissions to 1990 levels by 2020.

In a small room tucked in a corner of Princeton University's MacMillan Building, computer screens cover the wall and line desktops, each displaying a colorful cornucopia of data used to monitor campus energy equipment and limit the University's energy consumption.

Without leaving their seats, Facilities staff can use the computers to remotely turn off air conditioning in empty classrooms across campus or inspect one of the hundreds of fume hoods in Frick Chemistry Laboratory to ensure it is ventilating properly.

The University's Energy Management Center in MacMillan is at the hub of aggressive efforts to limit energy usage and costs in buildings across campus, supporting Princeton's comprehensive Sustainability Plan to reduce carbon dioxide emissions to 1990 levels by 2020.

"Our energy management strategy is not about a single project, but is a wide-ranging effort consisting of many individual projects," said Tom Nyquist, the executive director for engineering and campus energy in Facilities. 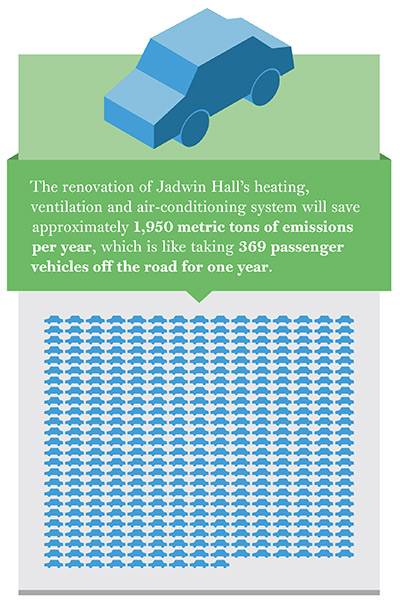 Initiatives to make buildings more energy efficient are coupled with projects to generate energy more sustainably, such as the recent installation of a 5.3-megawatt Solar Collector Field and various improvements at the University's central cogeneration plant, which supplies heat, cooling and electricity throughout campus. At the cogeneration plant, for example, the installation of a new condensing heat exchanger has further improved plant efficiency by 6 percent.

Since 2008, the University's overall efforts have resulted in an annual savings of $2.8 million in energy costs and 13,000 metric tons in reduced emissions. The state of New Jersey this year recognized Princeton's work with a Governor's Environmental Excellence Award.

While projects to cut energy can add up to big savings, many of them go unnoticed, Nyquist said.

"Students, faculty and staff may not even be aware of the energy savings efforts happening in their building every day," he said.

This is because the strategy focuses on small projects that have a large effect when multiplied across campus. These include replacing fluorescent lights with more efficient light-emitting diodes and improving mechanical systems unseen by most people, such as upgrading controls for heating, ventilation and air-conditioning (HVAC) systems.

"We really are engaged in a broad, multipronged effort to adopt measures that make sense from both an energy savings and financial standpoint," Nyquist said. "We have to be aggressive with energy savings projects in order to meet the University's aggressive standards for reducing campus emissions."

As part of its work, Facilities' Engineering and Campus Energy Department completed an audit that identified nearly 170 projects to reduce energy use in campus facilities. Projects currently under way will reduce 9,800 metric tons of carbon dioxide emissions annually and provide an additional $2.1 million in savings. 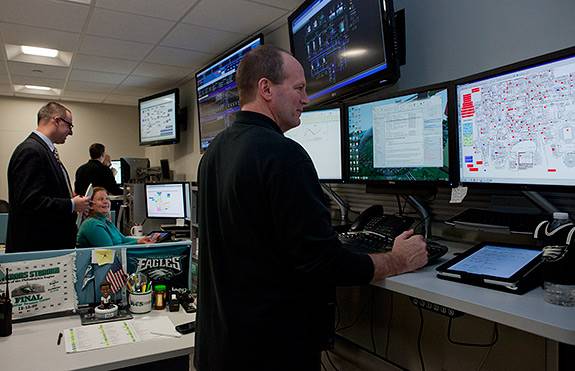 While programs to monitor the University's energy usage and to centralize campus energy systems have been in place for decades, the adoption of the Sustainability Plan brought a more ambitious and comprehensive approach.

"Making our buildings more energy efficient requires considerable investment, but the work generates significant savings over the long term," Nyquist said. "It is an important part of the University's broader effort to make the campus more sustainable." 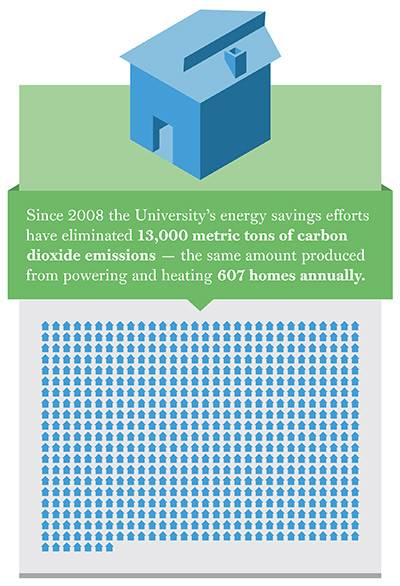 Renovation and construction
Since 2008, all new construction and major renovation projects have been built according to Princeton's campus design standards, which include sustainability guidelines and requirements that projects include energy-efficient systems.

"Rather than focus on the initial building costs, we also look at life cycle costs to determine if we make up our initial investment by saving energy over the 30-year-life of a particular piece of equipment," Nyquist said.

He cited examples in projects all over campus, including: the high-efficiency, self-closing fume hoods in Frick Laboratory; the renovation of Jadwin Hall's HVAC system that will save approximately 1,950 metric tons of emissions per year; and the new High-Performance Computing Research Center at the Forrestal Campus that replaces the old data center at 87 Prospect Ave. and lowers energy consumption by approximately 30 percent.

Additionally, the University uses a high-efficient, geothermal HVAC system at the Lawrence Apartments graduate complex, and will install geothermal systems at the new Lakeside Graduate Housing and Arts and Transit Project. 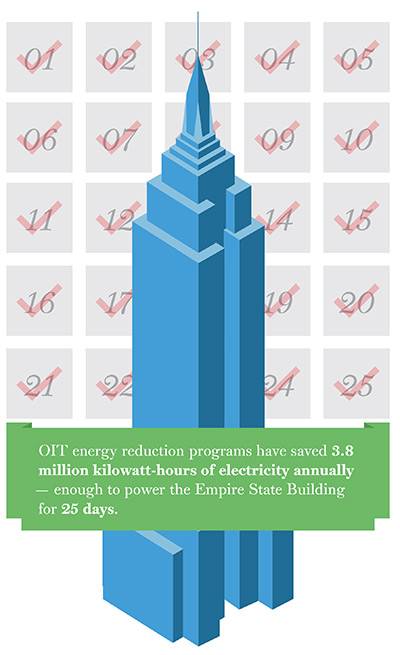 Facilities staff work with the registrar's office and department managers to automatically schedule heat or air conditioning in classrooms and auditoriums as needed.

"If a classroom is only going to be used for a few hours a day, you don't need the HVAC equipment to run 24-7," said Campus Energy Manager Bill Broadhurst, who oversees the EMC.

Broadhurst added that occupants typically control heating and cooling for personal spaces, such as dorm rooms.

Temperature control
Complementing efforts to centralize HVAC controls, sensors have been installed in rooms throughout campus to collect temperature data. The data help the EMC determine whether the amount of heating or cooling needs to be increased or decreased in a particular area.

The University also has adopted standard thermostat settings to help save energy costs, with 68 degrees as the setting for heating and 78 degrees for cooling.

"We want our systems to operate as efficiently as possible so we are not wasting energy," Broadhurst said. "By frequently monitoring them, our engineers can use computerized fault detection and diagnostic software to analyze and fix a problem or send a technician to evaluate an issue on site." 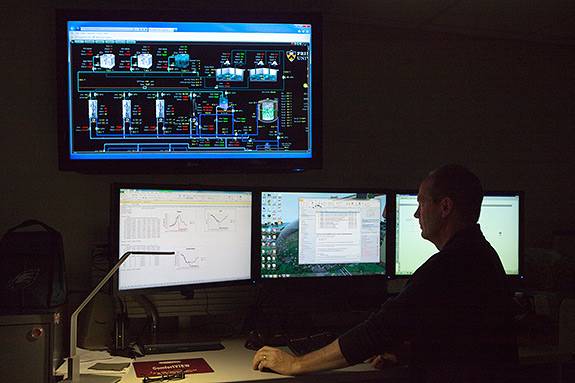 The central cooling plant at the University's High-Performance Computing Research Center, as shown on the large computer screen, is one of the facilities monitored by the Energy Management Center. The HPCRC at the Forrestal Campus replaced the old data center on Prospect Ave. and consumes 30 percent less energy.

Energy monitoring
The University is in the midst of installing meters to monitor energy usage in buildings across campus. Meters are used to collect baseline data about the performance of utilities in an individual building.

"Once we have established a baseline, we can continue to collect data from the meters to make sure the systems are operating at peak performance," said Energy Project Engineer Art Murphy, who is part of the EMC team.

In Butler College and Frick Laboratory, occupants also can observe this data in real time. Touch-screen energy monitoring dashboards in Frick's atrium and inside Butler's Bogle Hall show electric, heating and cooling data, as well as long-term electricity patterns for each facility.

LED lighting
The University has begun replacing older fluorescent and incandescent lights with light-emitting diodes (LEDs) in spaces across campus. LEDs will last considerably longer than the existing lights, resulting in considerable replacement and energy savings.

Lights in the West Parking Garage/Lot 7 and Lots 21 and 23 have been changed to LED lights. Motion sensors make the lot lights brighter when a person walks near and dims when a person leaves. The lights also are being installed in the Dillon Gymnasium basketball area, along with a new control system that will allow light to be focused on the area in use, such as a single basketball court, rather than the entire gym floor. 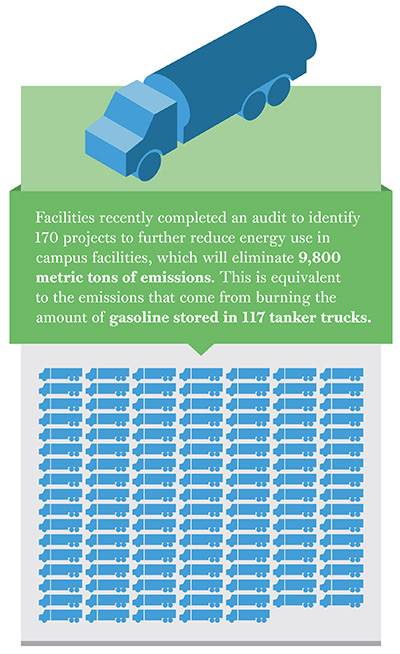 Lighting sensors
Newer buildings such as Sherrerd Hall are equipped with automated office lights, which turn off when rooms are unoccupied and adjust their brightness depending on how much sunlight is streaming through windows.

Plans also are under way to install LED lights along dormitory hallways in Bloomberg Hall that automatically brighten or dim if the hall is occupied or not.

OIT is in the process of consolidating computer storage systems, removing servers from offices and moving the data onto existing server hardware in the High-Performance Computing Research Center. The project has already saved more than 2.2 million kilowatt-hours of electricity annually, and has resulted in cost savings for departments.

OIT also is working with departments to replace old desktop computers with new, more energy-efficient desktop computers. The new computers also use software that power down the computer systems at night and on weekends when they are not in use. These combined efforts have resulted is an energy savings of 1.6 million kilowatt-hours annually.

Calculations for the infographics are based on information in the story and from the Environmental Protection Agency's Greenhouse Gas Equivalencies Calculator and USA Today, "Empire State Building goes greener with wind power" (Jan. 6, 2011).