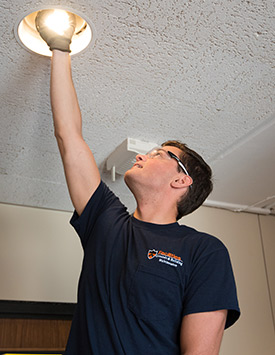 Princeton University is making campus lighting more sustainable and efficient one fixture at a time. Through the Lighting Efficiency Upgrade Program, the University will convert more than 100,000 fixtures to light-emitting diode (LED) technology in buildings across campus. The improvements will significantly reduce carbon emissions, promote cost savings and limit waste.

The Facilities Organization project, which began in July, is expected to be completed in December 2016 and could contribute as much as 15 percent toward the Princeton Sustainability Plan goal of reducing the University's carbon emissions to 1990 levels by 2020.

"The Lighting Efficiency Upgrade Program can transform Princeton's lighting systems to one of the most modern, reliable, efficient and environmentally responsible of their kind," said Campus Energy Manager Bill Broadhurst. "The recent progress made in LED technologies also has allowed these projects to be good investments financially."

"In addition to the obvious energy, carbon emissions and cost-savings benefits for the campus, I'm especially excited to work in partnership with our Facilities engineers to raise awareness about how smart it is to convert lights to LED technology," Director of Sustainability Shana Weber said. "This project has the potential to make this approach more accessible to other college campuses, and may even influence the choices our University community members make at home. That's the kind of broader impact we're seeking." 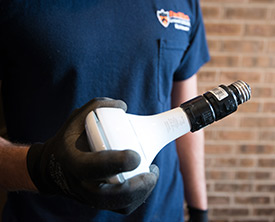 LED fixtures, as shown in this photo, are more efficient and have a longer service life than the fluorescent lights they will replace.

The new LED fixtures are, in many cases, about 50 percent more efficient than the fluorescent lights they will replace and will emit considerably less heat. They also have a longer service life — LEDs last 50,000 hours more than fluorescent lights — and they contain no mercury. LEDs are known for providing higher quality lighting, which reduces potential eye strain, with no ultraviolet emissions.

Over the lifetime of the LED fixtures, the project is expected to eliminate the need to safely dispose of more than 60,000 lamps containing mercury. It also should eliminate more than five tons of waste removal each year in the form of thousands of electronic ballasts.

"In addition to the significant cost savings, revenues and credits associated with using LED technology, the lighting upgrades also will lower the University's maintenance costs due to LEDs long expected life," Broadhurst said. "The safety of the Princeton Facilities staff also will be enhanced by reducing the amount of time workers spend climbing ladders to replace thousands of burnt-out lamps each year."

Princeton Facilities engineers are meeting with building managers to develop an LED project implementation schedule for buildings across campus. The decision to upgrade lighting to LED technology will be based on an in-depth life cycle analysis of each project and any special use requirements. 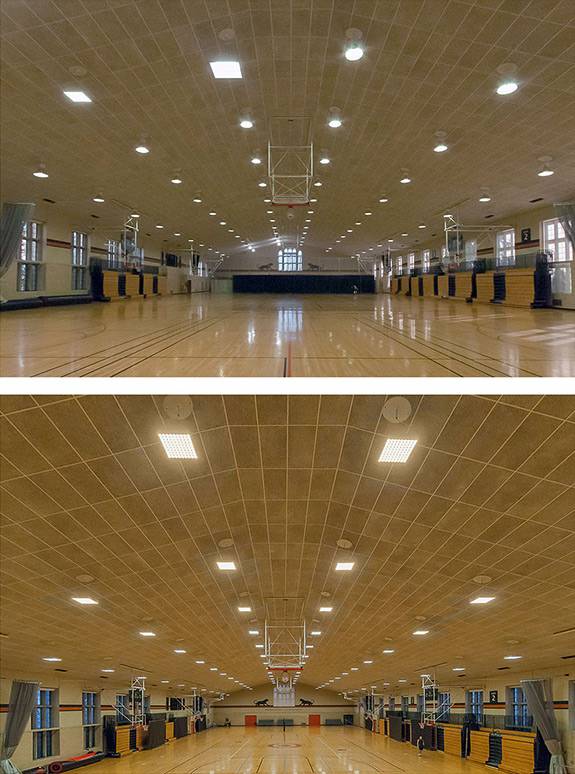 Dillon Gymnasium is one location where fluorescent lights (top photo) have been upgraded to LED fixtures (bottom photo). LEDs are known for providing higher quality lighting with no ultraviolet emissions.