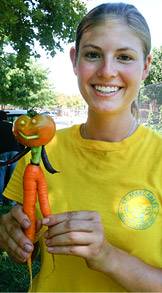 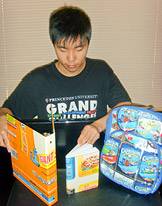 Lucas Ho, a rising sophomore, examines some of the consumer products made from recycled waste materials by TerraCycle, where he spent this summer as an intern in the research and development department.

Several Princeton undergraduates spent this summer immersed in local environmental issues, gaining insights into both the area's ecosystem and their own futures, by interning with four organizations focused on sustainability.

The local sustainability internships are part of the Princeton Environmental Institute (PEI) internship program, which enables more than 100 Princeton students from as many as 30 academic departments to spend June to late August working under the close supervision and mentorship of University faculty or experienced nonprofit and industry professionals in the environmental arena. These internships allow students to enhance their academic interests with hands-on, independent research and project experiences. PEI's program includes internships co-sponsored by the University's multidisciplinary Grand Challenges Program, which focuses on climate and energy, development and health. 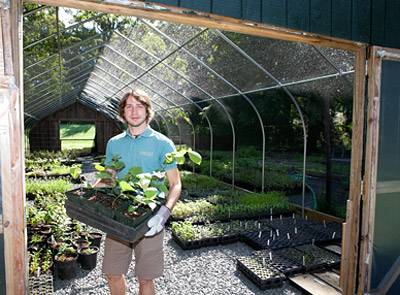 As an intern this summer with the D&R Greenway Land Trust, rising junior Eric Teitelbaum worked to restore the Rosedale Woods preserve in Princeton, which had become overgrown with photinia, an invasive plant. Here he selects some of the native plant species to be planted along a trail in the preserve as part of the restoration effort. (Photo by Denise Applewhite)

Two of the seven local sustainability interns, Peter Smith and Eric Teitelbaum, spent their time along the trails and multi-acre tracts of the D&R Greenway Land Trust, a Princeton-based nonprofit that focuses on preservation of area properties. Every year these properties need to be maintained and monitored, and Smith and Teitelbaum each had roles in helping fulfill that mission.

Smith, a rising sophomore who plans to major in sociology, worked closely with Jim Amon and Jared Rosenbaum, D&R Greenway's director and associate director of land stewardship, respectively. Smith's summer experience combined many facets of the organization's mission, from cultivating native flora in a nursery for planting on D&R Greenway's preserves, to combating the spread of invasive plant species on its properties.

Smith said he was eager for an internship that would allow him to remain active and outdoors while also acquainting him with central New Jersey's diverse wildlife and flora.

"I learned even more than I expected. The greatest reward was spending so much time outside and reconnecting with the natural world," Smith said. "I had the great privilege of getting to ask Jared and Jim, two fantastic naturalists, countless questions about the flora and fauna of New Jersey, and I feel greatly enriched by the new information I gleaned over the course of the summer."

Whether spotting a swallowtail butterfly in a meadow, or highbush blueberries on the edge of a trail, Smith said this summer heightened his awareness of his surroundings, adding that his time with D&R Greenway "increased my appreciation of New Jersey's natural beauty, and it impressed upon me the importance of preserving native plant habitats."

Smith also benefited from participating in an initiative known as the Bulk Seed Project. With a recent grant from the New York City Department of Parks and Recreation, D&R Greenway expanded its nursery to the St. Michael's Preserve in Hopewell, where several one-acre plots are being maintained with different native plant species for the sole purpose of collecting seeds for a landfill restoration project on Staten Island.

"My time in the nursery taught me a lot about irrigation methods and how to nurture plants from the seed stage on," Smith said.

He said the internship experience piqued his interest in Princeton's environmental studies certificate and has led him to "ponder possible ways of incorporating environmental issues into my academic course of study." 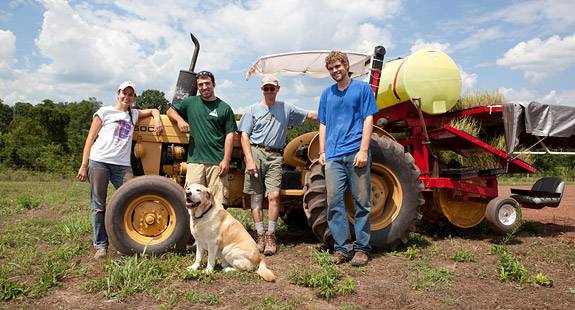 Peter Smith (right), a rising sophomore at Princeton, worked this summer as an intern with D&R Greenway. Smith's duties included helping cultivate native plant species at the St. Michael's Preserve in Hopewell, where, from left, he is joined by fellow intern Kimberlee Davies, a rising senior at the University of Oklahoma, and D&R Greenway staff members Jeff Emde and Bill Flemer. (Photo by Brian Wilson)

For Teitelbaum, a chemical and biological engineering major, this was his second summer as a PEI intern at D&R Greenway. Part of his job was to complete several projects he began last summer, including habitat restoration and trail building. Allowing public access through trails and overlooks is another important component of D&R Greenway's mission.

Teitelbaum also worked to restore the Rosedale Woods preserve adjacent to D&R Greenway's Princeton headquarters off Rosedale Road. Prior to last summer, the 14-acre preserve was completely overgrown with photinia, an invasive plant that threatens the natural ecosystem. Teitelbaum helped remove the plants in 2010, and this summer he began the process of restoring the preserve, choosing several native species for different areas along a trail and setting up deer fencing to protect the new plants. Although his internships ended this month, with time permitting, in September, he will build an additional trail through another, more diverse area of the preserve.

"I want to give hikers a better sense of the full scope of New Jersey's wildlife," said Teitelbaum, a rising junior. "Pileated woodpeckers have quite a large population here, and I would love to increase access to viewing these beautiful birds to the general public."

Upon starting this summer's internship, Teitelbaum said he hoped to leave with "a better understanding of the environment," and since June he has learned more about the problems facing New Jersey's ecosystems than he expected.

"The disparity between native and nonnative plants, the problems caused by deer overpopulation and even issues with lack of wildfires are all things I would have not been able to talk about prior to the internship," Teitelbaum said. "Through countless experiments, readings and restorations, the staff really inspired me to ask questions about the world around me and not accept anything at face value."

Teitelbaum also praised his supervisors at D&R Greenway, who shared with him such a wide range of knowledge that every day he learned more about complex forestry, indigenous birds and even medicinal uses for native plants.

Teitelbaum said the internship inspired him to think of ways to combine his chemical and biological engineering major with environmental conservation.

"Whether I design pesticides specific to certain species, or develop green construction materials, I'm now convinced that I want my career to combine chemistry and the environment," he said.

"Whatever Eric and Peter end up doing in the future, I hope this internship helps them integrate a conservation ethic into their work," said Linda Mead, D&R Greenway president and CEO. "Being out there every day, working in nature, they feel a sense of belonging to nature. I've heard numerous interns say that not only do they feel they've learned about trees and shrubs and plants, but they've also learned how to connect with nature personally."

Anne (Ginny) Weinmann, a rising senior majoring in the Department of Art and Archaeology, also connected with nature this summer, but in an urban setting. As an intern with Isles Inc., a Trenton-based community development organization, she worked in a community garden and saw firsthand the positive impact that Isles' sustainable farming initiative has on residents of the city.

"Working in the garden gave me an amazing opportunity to understand how gardens operate, how to grow food, and how to use food that is in season. Much of the food that my friends and I cooked over the summer was directly from the gardens," Weinmann said. "I also learned a lot about food access or lack of food access within cities. Urban gardens greatly increase the sense of community, as well as access to fresh food, within cities. The gardens are doing an incredible service to Trenton."

For Daniel Fletcher, a civil and environmental engineering major who is pursuing a certificate in architecture and engineering, his summer internship was inspired by his academic experiences and helped to shape his thoughts about potential career options.

Fletcher was an intern with the Stony Brook-Millstone Watershed Association, which focuses on conservation, advocacy, science and education. His internship was based at the Watershed offices on an 860-acre reserve in Hopewell. His fieldwork involved creating a hydrological model of the watershed in an effort to curb frequent flooding that occurs there, while also examining the impact of groundwater runoff and pollution on Harry's Brook in Princeton.

Fletcher, a rising senior, said his interest in the internship was sparked by a hydrology class he took last spring. 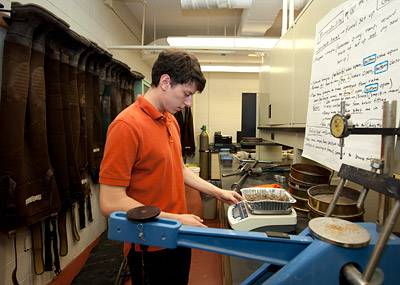 During his internship with the Stony Brook-Millstone Watershed Association, rising senior Daniel Fletcher examines soil samples as part of efforts to study the impact of groundwater runoff and pollution on Harry's Brook in Princeton. (Photo by Brian Wilson)

"I was hoping to get a more hands-on feel for all of the things we learned in that course," said Fletcher, a rising senior. "Through my summer internship I acquired a much better understanding of how physical infrastructures, such as storm drains and different kinds of surfaces, can contribute to a region's hydrological properties."

Fletcher said the internship was a step outside of what he was used to in an academic setting, that it was "a lot of fun" and it allowed him to consider previously unexplored career paths.

"I saw firsthand the other side of the civil and environmental engineering department -- the environmental side," he said. "Before doing this internship, I thought I would end up in a structural engineering-related field, but now I'm definitely taking a look at the water resources sector."

Jim Waltman, executive director of the Watershed and a 1986 Princeton graduate, said he believes Fletcher's time spent studying groundwater runoff, flooding and the vitality of Harry's Brook will have a real and a noticeable impact on the way the surrounding community understands its natural environment.

"Through his work I believe Daniel has been able to see a tangible way that he can make a difference as a student and through the course of his career," Waltman said. "It's a very different experience to apply theoretical concepts to a particular problem. It's been exciting and inspiring for him to know he can be part of bringing a stream back to better ecological health. That's a tangible impact he can have on the world."

And that impact is certainly not lost on Fletcher.

"Having done this project, I now know so much more than I did when I started about hydrologic processes and a watershed's responses to rain events," he said. "My work can be used to actually make a difference to the health of the local ecosystem. Hopefully my observations will be used by the town to influence meaningful changes."

Lucas Ho, a rising sophomore, also was able to see the potential for positive change through his internship with TerraCycle, a Trenton-based company founded by former Princeton student Tom Szaky that creates consumer products from recycled waste materials.

Ho, an electrical engineering major, worked in TerraCycle's research and development department. He said the experience provided new insights into the applications of materials science, as well as a greater appreciation for sustainable thinking.

"I accumulated a vast bank of knowledge about how materials science can improve sustainability. My internship taught me how the corporate and academic settings are different and how ideas are implemented in the real world," he said.

Ho worked on issues related to diverting waste from landfills and finding new uses for those materials, such as suggesting that unused floppy disks be shipped to a painter who uses them as canvas.

"I was inspired to think of waste as treasure and not junk, and I appreciate the opportunity and experience," he said.