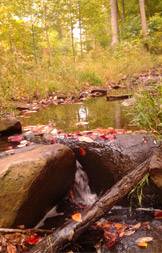 Princeton researchers are embarking on sustainability research projects this fall using the campus as a living laboratory. The projects will enable faculty members and students to explore issues in energy efficiency, watershed management and environmental monitoring in a real-life setting. One of the areas of focus is the restored Washington Road Stream, which is a laboratory for projects involving the intersection of suburban and natural ecosystems.

The inspiration for a new research project came on a summer day when the humidity — a staple of summer in New Jersey — was so high that it was interfering with the results of Princeton professor Daniel Steingart's experiments.

Steingart was testing a new electric-vehicle battery technology in two laboratories in the School of Engineering and Applied Science's complex when humidity got in the way. The problem sparked a project that would encourage his students to learn skills in setting up sensor networks while providing information to facilities managers that could lead to more efficient ways to control indoor climates.

The use of the "campus as a laboratory" has gained popularity at Princeton and institutions worldwide. Resembling self-contained towns, universities can be an ideal place to research topics in sustainability. The approach can be used to study a range of topics, from energy conservation to natural resource management, to the human relationship with the environment.

For Princeton, which has made significant strides in reducing its carbon emissions and energy consumption in recent years, the campus-as-a-lab approach represents a way to broaden the applications of the University's dual missions of education and research, according to Pablo Debenedetti, dean for research and the Class of 1950 Professor in Engineering and Applied Science.

"The greatest contribution that Princeton can make for creating a sustainable global society is through educating our students and through the research we conduct," Debenedetti said. "Through support for campus-as-a-laboratory projects, the University is training future leaders and scientists." 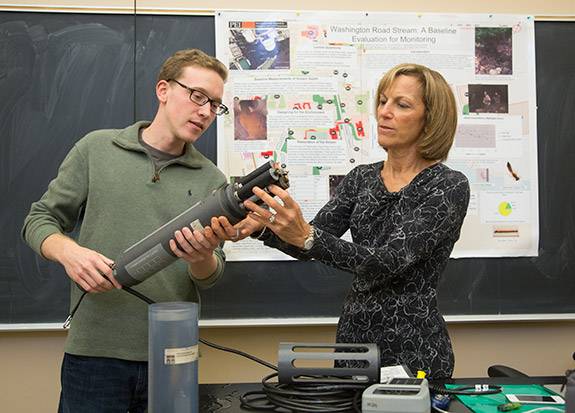 Princeton senior Daniel Johnson and Eileen Zerba, a senior lecturer in ecology and evolutionary biology, examine equipment for monitoring the water in the Washington Road Stream. (Photo by Amaris Hardy, Office of Communications)

Through the new projects, researchers will:

• Place temperature and humidity sensors around campus, using low-cost, off-the-shelf electronics — Daniel Steingart, assistant professor of mechanical and aerospace engineering and the Andlinger Center for Energy and the Environment;

• Develop a comprehensive watershed modeling system and an integrated monitoring system for the campus water and energy cycles — James Smith, the William and Edna Macaleer Professor of Engineering and Applied Science; Mary Lynn Baeck, hydrometeorology programmer in civil and environmental engineering; and Eileen Zerba, senior lecturer in ecology and evolutionary biology; and

• Model the air flow in large indoor air spaces, such as the Frick Chemistry Laboratory, and monitor the energy efficiency of Princeton's buildings from the air — Forrest Meggers, assistant professor of architecture and the Andlinger Center for Energy and the Environment.

Steingart's project involves monitoring the temperature and humidity at numerous locations on campus to give facilities managers better information about how well existing climate-control systems are working, while teaching students how to set up sensor networks. The students will install about 40 temperature and humidity sensors around Princeton's Engineering Quad and other labs and offices. The students will connect the sensors to inexpensive, off-the-shelf electronic components such as Arduino computing devices. The readings will travel to a central computer via the campus' wireless Internet networks. Steingart plans to involve Princeton's facilities managers in evaluating the readings from the sensor network.

The campus-as-a-lab concept has been enthusiastically supported by Princeton's Facilities Organization, said Michael McKay, vice president for facilities. "Our staff members really get excited about these projects," he said. "They get a chance to participate with the faculty in doing things that they think are important." 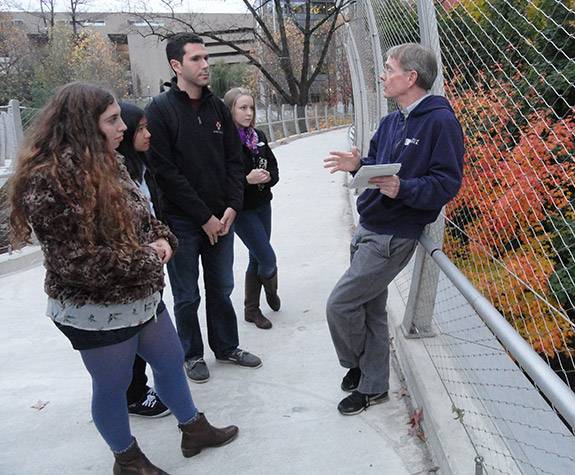 Undergraduates on Streicker Bridge overlooking the Washington Road Stream restoration area listen as James Smith, the William and Edna Macaleer Professor of Engineering and Applied Science, talks about the research that is being conducted on the area. (Photo by Catherine Zandonella, Office of the Dean for Research)

For ecology-minded students, the stream that runs alongside Washington Road, a major artery through campus, has become a laboratory for projects involving the intersection of suburban and natural ecosystems. Originally a channel for stormwater runoff from campus buildings, the stream was restored in 2012 to resemble a traditional woodland stream, but it still handles extremely large volumes of water from campus roofs and surfaces during heavy rains. "The problem is that rivers in urban settings like Princeton are nothing like rivers in natural settings," said James Smith.

As part of the project to build a model of the campus watershed, a research team consisting of Smith, Eileen Zerba, Mary Lynn Baeck and students are placing water gauges in strategic locations along the stream's route. "We are getting students interested in tying what they learn here into these larger ideas about how urbanization alters the environment," Baeck said.

The project also involves modeling the cycling of water and energy between the land, bodies of water such as lakes and streams, and the atmosphere via processes such as precipitation, evaporation from soil and paved surfaces, and transpiration, which is the movement of water from the soil through plants into the atmosphere.

Brianne Smith, a graduate student in civil and environmental engineering who has been assisting James Smith in teaching a class in hydrology, said that the campus-as-a-laboratory sites aid classwork as well as research. "The students have a lot more engagement in the topic when they are able to connect what they are learning to situations that are right outside, here on campus," she said.

Zerba, with help from Daniel Johnson, Class of 2015, is looking at the potential cost-savings of green roofs such as the one atop Butler College. Their research indicates that green roofs can last longer than conventional roofs because the vegetation helps to reduce extreme temperature swings, leading to less wear and tear on the waterproofing membrane, said Zerba. Johnson and Zerba are writing up the results for publication.

"It is exciting to explore the impact that a green roof has on the campus," said Johnson, who is majoring in the Woodrow Wilson School of Public and International Affairs and has taken two classes with Zerba. "This is valuable first-hand experience for anyone interested in environmental and public policy."

Johnson is also helping Zerba with a project that involves evaulating water quality at the Washington Road Stream; the health of the stream can be determined by measuring paratmeters such as dissolved oxygen, pH, temperature, chlorophyll, water clarity and blue-green algae.

Using the campus as a lab is relevant across the disciplines, noted Emily Carter, the Gerhard R. Andlinger Professor of Energy and the Environment and director of the Andlinger Center. "Studies of sustainability on campus can range from energy and environmental science and engineering projects to experiments that relate to human behavior," she said. 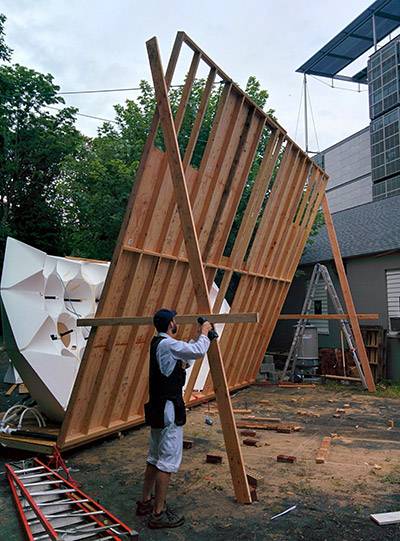 Up in the air

One of the projects involves setting up sensors to monitor air flow in large indoor spaces. Several of Princeton's newest buildings, including the Frick Chemistry Laboratory, have towering ceilings. Often these large air spaces were designed as part of a natural ventilation system meant to reduce the reliance on air conditioning. Because air movement in these spaces is difficult to predict, the air flow does not always work as planned, resulting in increased use of air conditioning and increased cost.

To explore the behavior of indoor air, Forrest Meggers will work with graduate students to place sensors in the upper reaches of buildings. A second project with undergraduates will examine the energy efficiency of Princeton buildings with infrared cameras. The availability of low-cost electronic components is essential, said Meggers. "When I studied engineering, equipment was very expensive, and if you broke something it was a big deal," he said. "Today, students have access to devices that are so low-cost that if one breaks, it is not the end of the world. This makes learning much more accessible and engaging for the students."

One of the students who has carried out research in the campus environment is Eric Teitelbaum, a chemical and biological engineering major who conducted his senior thesis with Meggers and graduated in 2014. "I am a hands-on person and I like navigating through new challenges," Teitelbaum said. "The 'campus-as-a-lab' approach at Princeton offered me the chance to get out of the classroom but also gave me the opportunity to contribute to advanced research as an undergraduate."

"Campuses are ideal environments in which to test new ideas in a functioning community, and to work out the bugs in an experimental educational setting," said Shana Weber, director of the Office of Sustainability, which works collaboratively with academic and operational partners across campus to advance sustainability education and research.