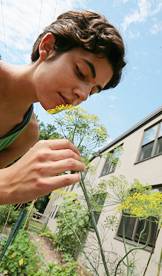 Ruthie Schwab, a member of the class of 2009, smells fennel fronds growing in the new organic garden on the south side of the University's Forbes College. Schwab spearheads the Garden Project, a student initiative overseen by the Office of Sustainability to educate the campus about sustainable food systems and the environment.

Top left: An edible nasturtium sprouts from the 55-by-12-foot garden plot. Schwab said she hopes the garden will become a center of activity on campus, with lectures, cooking demonstrations and other events planned for the upcoming academic year. 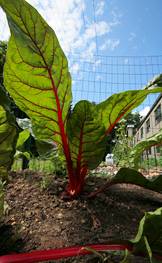 The garden features a variety of salad greens, including this Swiss chard, which is commonly referred to as "bright lights" because of its red stem. Carrots, peppers, tomatoes, squash, parsley and an array of herbs, such as basil, rosemary and sage, also are grown.

Below left: From left, Schwab, Diana Bonaccorsi and Ben Elga tend the garden. The Princeton Environmental Institute funded continued work on the plot this summer, providing internships for Schwab and Elga, a member of the class of 2008. The Office of Sustainability supported a part-time summer internship for Bonaccorsi, a member of the class of 2008     Photos: Denise Applewhite

Ruthie Schwab, Ben Elga and Diana Bonaccorsi are spending their summer among rows of aromatic herbs, lines of leafy greens and mounds of sprouting vegetables, all contained in a small patch of land behind the University's Forbes College.

While many of their fellow Princeton classmates work in air-conditioned offices, conduct research in sterile labs or travel to far-off places, the students sweat under the summer sun planting, watering and weeding the 55-by-12-foot garden they hope will provide the campus with more than just nourishment.

Their hard work is part of the Garden Project, a new student initiative overseen by the Office of Sustainability that aims to educate the campus about the American food system and its implications for the environment, health and nutrition, culture, and the future.  The Princeton Environmental Institute funded continued work at the garden this summer, providing an internship for Schwab as project coordinator and for Elga as garden apprentice. Bonaccorsi's part-time summer work at the garden is funded through the Office of Sustainability.

"It's nice because you see where your work is going," said Bonaccorsi, a member of the class of 2008. "I feel that with a lot of summer internships you're just there for a few months and never go back. But here you actually get to use and enjoy the products of your time and effort."

Schwab and Elga spend about 30 hours per week working on the project and in the organic garden, located on the south side of Forbes College next to Springdale Golf Course. Bonaccorsi works about 10 hours per week, researching and planning project activities for the upcoming year. Schwab said the students eat most of what they grow, which includes salad greens, parsley, edible flowers, carrots, peppers, tomatoes, squash, Swiss chard and an array of herbs such as basil, rosemary and sage.

"It was really satisfying the first time I planted seeds and things sprouted two days later," said Elga, a member of the class of 2008.

Shana Weber, the University's sustainability manager, said the Garden Project reflects the kind of holistic approach she is working toward at the university level. Weber said she has been impressed with the vision that Schwab -- who spearheaded the student initiative -- has for the project.

"Although it is still in a pilot stage, I see the garden becoming a great way to begin conversations on campus about the environment and sustainability," Weber said. "Ruthie and the other students aren't just interested in planting vegetables and flowers. They're interested in using the garden as an educational tool to help people learn about sustainable food systems, and they’re inviting in a very diverse group of partners to help them accomplish that."

The students hope the plot will become a gathering place on campus and are working to organize special events connected to the garden for this academic year, such as lectures and cooking demonstrations. Schwab said she hopes the garden will show students that they can choose food that is healthy and has minimal environmental impact because it is grown locally and without pesticides.

"Issues related to the environment and climate change are something our generation really has to face and solve," said Schwab, a member of the class of 2009.

She said the garden project is a small piece of overall efforts at the University to reduce greenhouse gas emissions, represented by projects such as fusion energy research at the Princeton Plasma Physics Laboratory and University Dining Services' offering of organic, locally grown food in dining halls.

"But our project can have an effect that we really can't calculate," Schwab said. "It's the knowledge we will pass onto students about their food choices that carries beyond this institution. It's when we start buying our own homes and think about using geothermal heating systems, or whether we want to live near a community-supported farm."

Weber said she sees the garden as a microcosm of the global link between the food system and the environment.

"Most of the food that ends up on our plate travels more than a thousand miles to get there, and is grown with herbicides and pesticides. By fostering local, healthy food systems we can reduce the carbon emissions associated with the food we eat," Weber said. "If all communities started exploring what Ruthie and the Garden Project team are doing, we could help reduce the overall carbon footprint of this country."

Kathy Hackett, associate director of the Princeton Environmental Institute, said PEI thought it was important to support the students' efforts to maintain the garden over the summer. She said she was pleased to see how they responded to issues discussed at the institute's Food, Ethics and the Environment conference.

"When we hosted the conference last year we were amazed by the debate and awareness raised on campus about the environmental impacts of modern industrial food production, distribution and consumption," Hackett said. "Through the garden project, Ruthie and Ben are cultivating a new crop of students whose activism is practical and gets to the source of food production and consumption."

For the upcoming academic year, Schwab's coordinator position will revert back to the Office of Sustainability, while student volunteers will help her expand on what the group started this summer.

Patrick Caddeau, director of studies at Forbes College, said Forbes has been glad to provide space and some startup funding for the garden. He said administrators are looking forward to incorporating the garden into the college's efforts to promote environmental awareness, including a cook-off planned for freshman orientation where student chefs will prepare meals featuring items from the garden.

Schwab, Elga and Bonaccorsi also are seeking interdisciplinary opportunities to connect academic departments with the garden. Schwab said she hopes to enlist creative arts students to paint a mural on the wall facing the plot and has had preliminary discussions with students from the School of Architecture about holding a design contest to build a low-impact greenhouse.

"It's overwhelming the number of things on campus that can be connected to the garden," Schwab said.