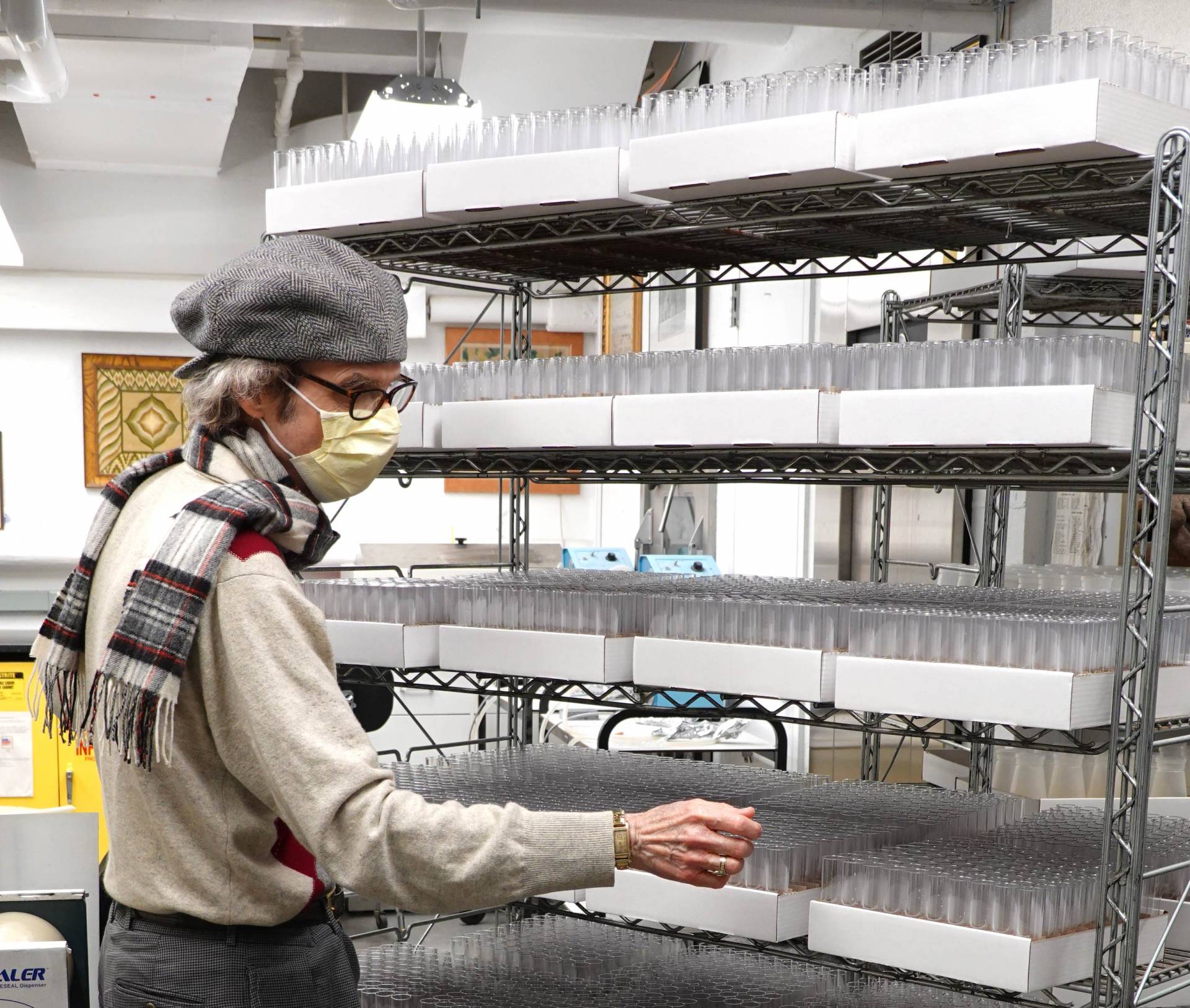 When the University shuttered its labs in response to the coronavirus pandemic, Gordon Gray continued to report to work in Princeton’s fly kitchen to prepare food for the species Drosophila melanogaster — fruit flies — which are indispensable in research for answering fundamental scientific questions on topics ranging from behavior to birth defects and human diseases such as cancer. Shown: Once the tubes are filled with fly food, Gray places them on racks where researchers can pick them up and take them back to their laboratories.

Millions of tiny creatures — and the scientific discoveries that they make possible — depend on one of the essential workers reporting to campus during the pandemic.

Gordon Gray is "chef de cuisine" at Princeton's fly kitchen, where he brews a rich and hearty concoction for the roughly 2 million fruit flies that call Princeton laboratories home.

The flies are indispensable for answering fundamental scientific questions on topics ranging from behavior to birth defects and human diseases such as cancer. 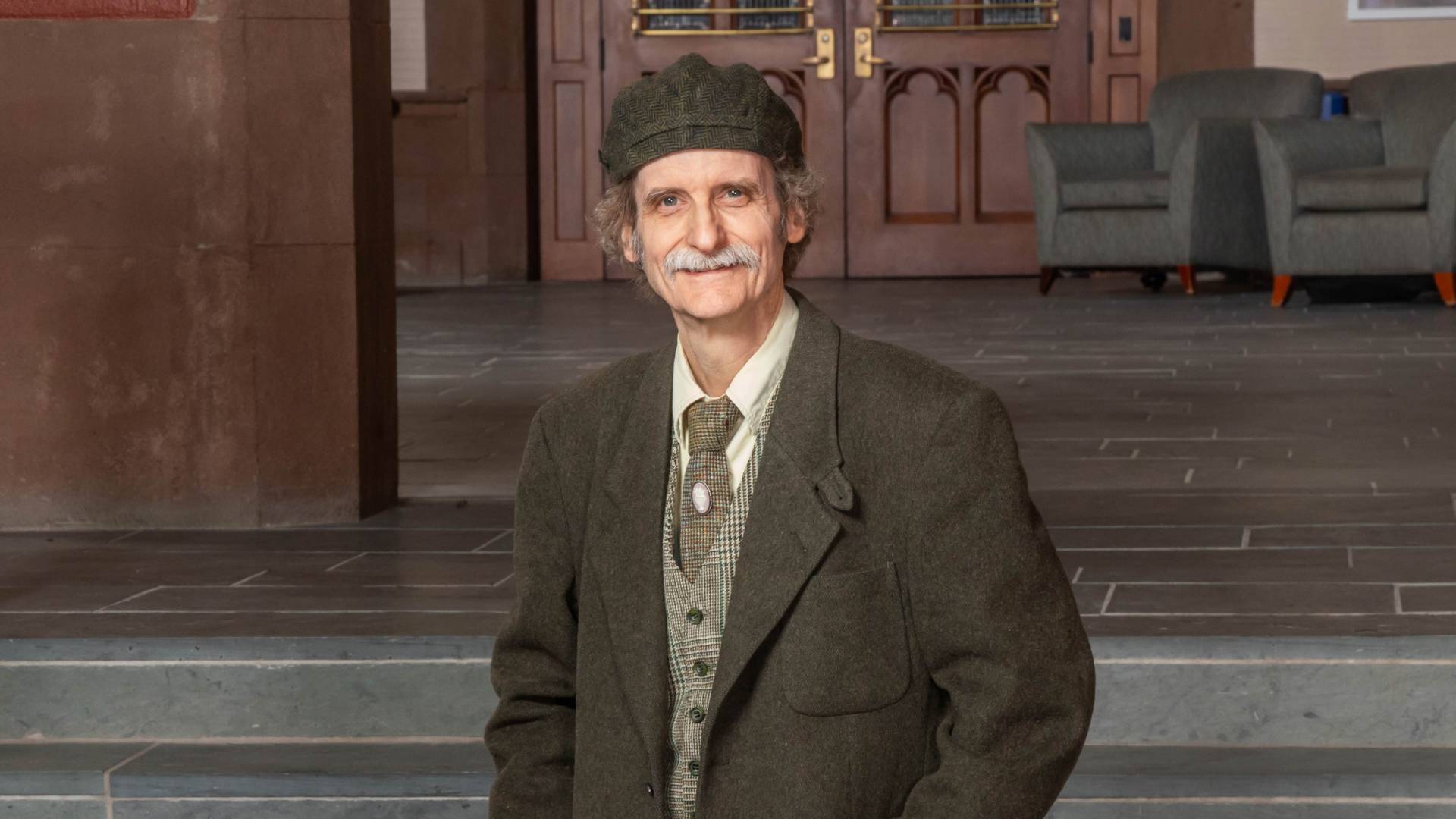 Gordon Gray is the chef in Princeton's "fly kitchen," where for the last four decades he has cooked a nourishing concoction for Princeton's 2 million fruit flies. This photo was taken before the COVID-19 crisis in honor of Gray's 45 years of service at Princeton.

For more than four decades, Gray has been rustling grub for flies at Princeton. Over the years, he has tinkered to improve the recipe. He even co-invented a fly food machine and patented it.

"It's not your normal fast food," said Gray.

Most of the flies that feast on Gray's fare are of the species Drosophila melanogaster, the same sesame-seed-sized foes that grab a foothold in your kitchen come late summer.

What makes them valuable to science is their genes. Fruit flies have played a major role in scientific research since the early 1900s. Over the decades, researchers have altered or edited various genes in the flies. Today at research institutions around the world there are thousands of research strains, each with one or several distinct variations ideal for answering a particular scientific question.

Unlike other living systems that scientists study, such as cells or even worms, flies cannot be frozen.

So when the University closed its labs in response to the pandemic, it was clear that Princeton's fly kitchen would have to stay open.

Elizabeth Gavis, Princeton's Damon B. Pfeiffer Professor in the Life Sciences and a professor of molecular biology, is the faculty supervisor of the fly kitchen, or more properly, the Drosophila Media Facility.

"The strains are invaluable because they are unique — we may be the only lab that has them," Gavis said. Although scientists typically stash backup colonies at stock centers such as one in Bloomington, Indiana, Gavis said keeping just one backup colony is risky. "A strain can be easily lost by contamination with other strains during handling, or from a bad batch of food, or from bacterial or fungal infections."

During the pandemic, with nearly all laboratory research halted, demand for the fly fuel is only about a third of what it normally is. Gray, whose title is Professional Drosophila Specialist, just needs to make enough food to keep the colonies alive so that their populations can be expanded later when research starts up again.

That's about 25 gallons of food a week. He comes in nearly every day to make more food or to make sure there is enough to meet demand.

When he arrives at the now nearly deserted building that houses the fly kitchen, Gray takes the elevator to the basement and enters the one-room facility, its gleaming stainless steel counters resembling the meal-prep section of a school cafeteria. 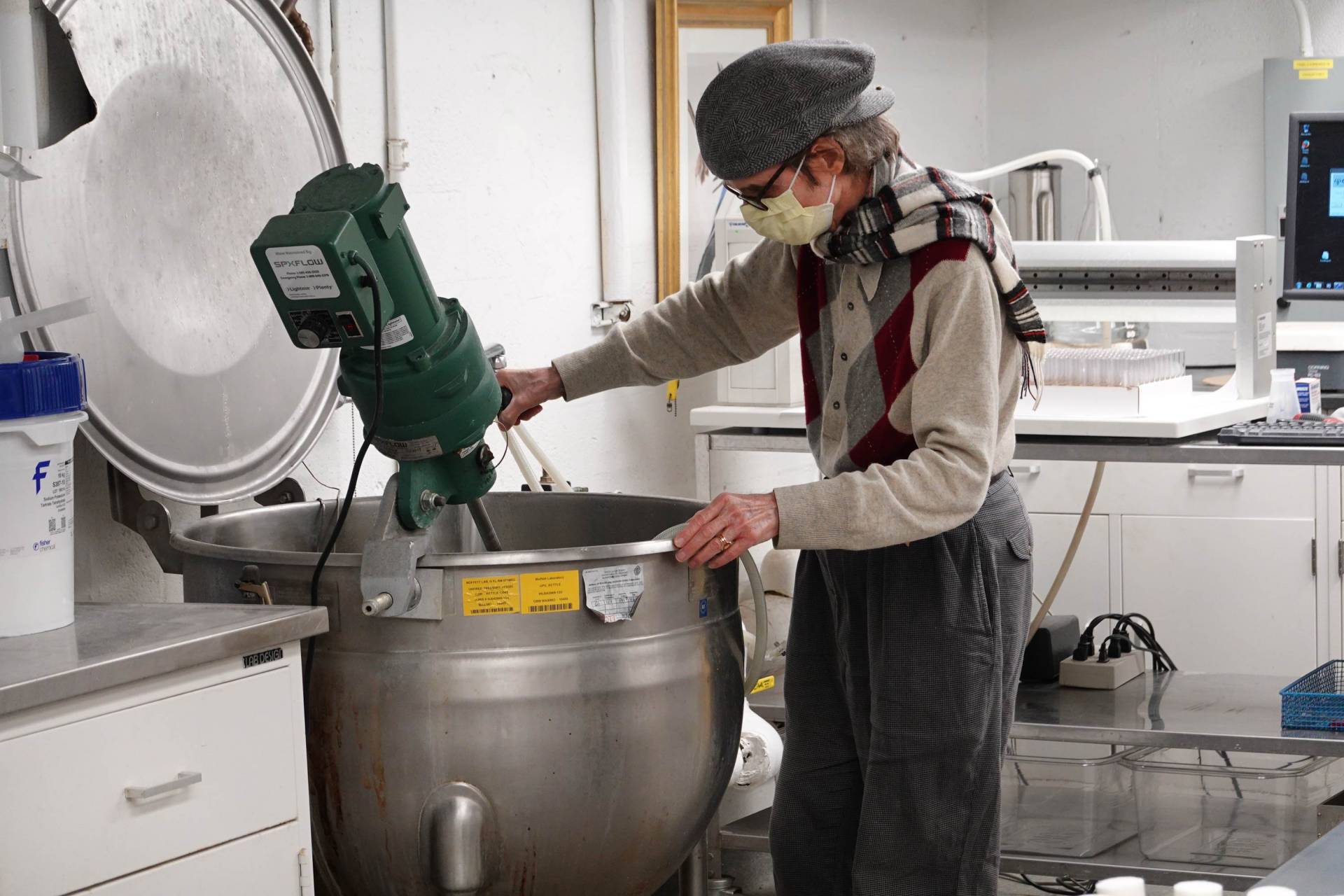 Recipe for fruit fly fulfillment: Gray adds corn meal, yeast, sugar and other ingredients to a cauldron and heats the concoction while stirring constantly.

To fix the fly fare, Gray adds various ingredients to a cauldron so large it comes up to his waist. He pours in water, then corn meal, yeast, a jelly-like substance called agar, a couple of types of sugar, some salt, and B-complex vitamins. Then he brings the mixture to a boil, while the room hums to the whir of the electric mixer. After 30 to 45 minutes, he turns off the heat. As the mixture cools, he adds a preservative, which has a sharp acidic smell.

The flies don't seem to mind. None are allowed in the kitchen due to the risk of contaminating the food, although Gray said he has occasionally seen one hitchhike down in the elevator. (*See a tip on trapping fruit flies.)

Princeton's fly recipe, developed originally in the 1950s and improved upon by Gray over the years, is one of the world's best recipes, according to Gray.

"It is sort of the gold standard against which other fly food is measured," Gray said, adding that one of the faculty members, developmental biologist Michael Levine, once told him, "I hope you people realize that if you want to do fruit fly research, Princeton is the place to be."

"The fly food at Princeton is legendary," confirmed Levine, who joined the faculty five years ago and is Princeton's Anthony B. Evnin '62 Professor in Genomics, professor of molecular biology and director of the Lewis-Sigler Institute for Integrative Genomics.

In the 1990s, frustrated at how long it took to fill the tubes, Gray enlisted a co-worker from the machine shop and the two invented a machine to fill the tubes. The University patented the contraption, which was marketed through a scientific equipment maker, with a portion of the royalties going to Gray and his co-inventor.

Each tube or bottle is about one-third full with the yellow broth, which congeals over the next several hours to form a substance with the consistency of a pumpkin pie filling. 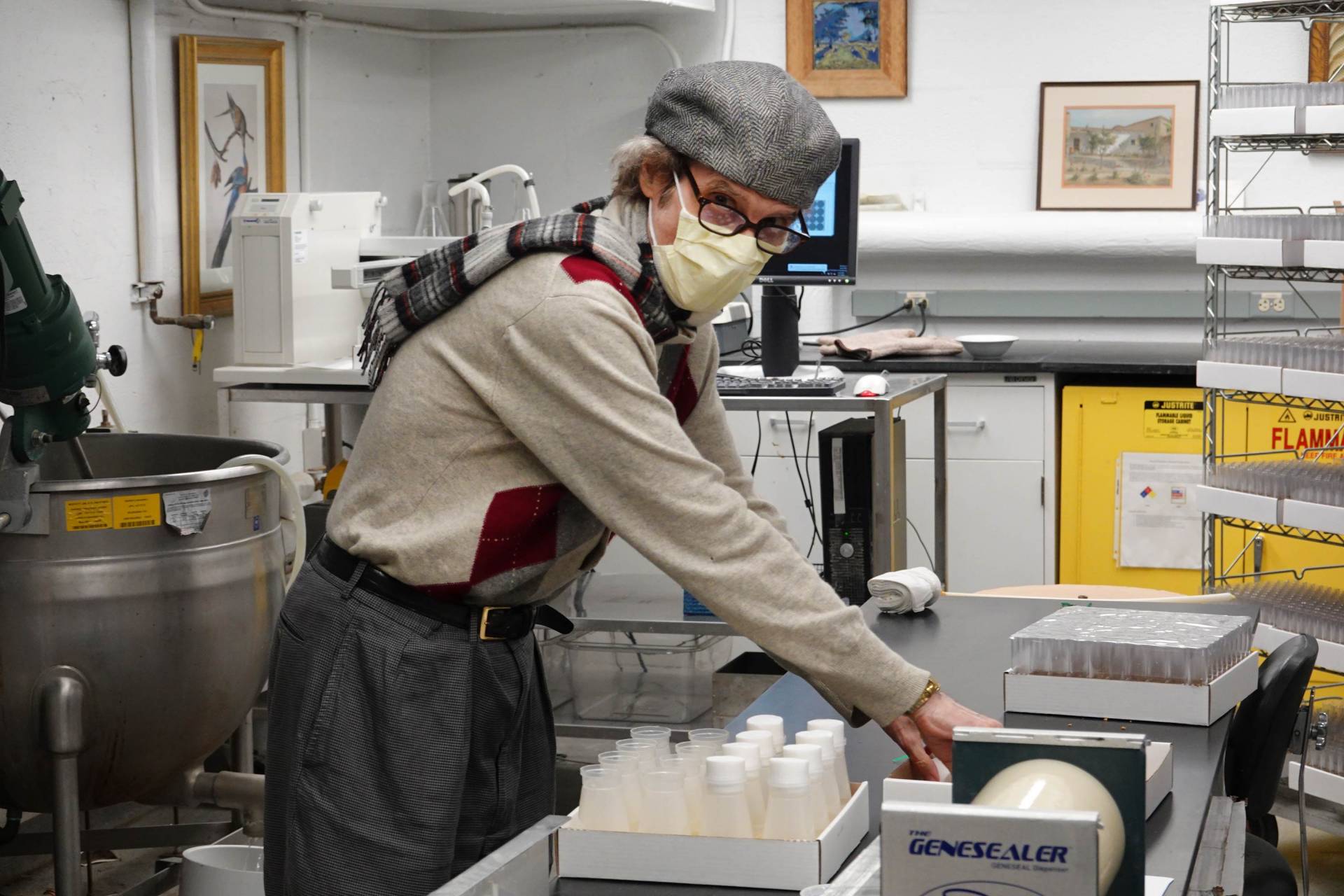 The tubes and bottles serve both as a fly restaurant and living quarters. The flies live above the solidified food. They land on it, nibble at it, and when the time comes, they deposit their eggs on the surface. After the eggs hatch, the larvae burrow into the food where they grow until it is time to crawl out and turn into a pupa, a sort of cocoon, from which the adult fly emerges.

To keep the tube from overcrowding, and to replenish the food, researchers must transfer the inhabitants to a fresh tube or bottle every few weeks.

To these scientists, the flies are anything but pests.

"Drosophila is a really good organism for studying what genes do," Gavis said. "You can delete a gene and ask what happens to behavior, or development, or survival. A lot of the genes that are connected to cancer in humans were originally discovered in Drosophila," she said.

Gavis and her team study genes that control how cells, as well as certain parts of cells, become specialized for different functions during the development of an organism. They focus on the role of messenger RNAs, which act as intermediaries between genes and proteins.

Several research groups at Princeton are studying how genes turn on and off to control the development of animals from a single cell, formed when egg and sperm fuse, to complex adult organisms. Discoveries in this field led to the 1995 Nobel Prize in Physiology or Medicine for Princeton professor Eric Wieschaus, the Squibb Professor in Molecular Biology and a professor of molecular biology and the Lewis-Sigler Institute for Integrative Genomics.

Other researchers at Princeton use fruit flies to study how genes influence behaviors such as mating. And other scientists ask how have the functions of genes changed and evolved over millennia?

Two teaching labs expose undergraduates to fly research, including a course in which students concentrating in molecular biology get firsthand experience with designing and conducting an independent research study.

One common genetic alteration is to attach a particular gene of interest to another gene that makes a molecule that gives off fluorescent red, green or blue light. By looking for the fluorescent light in cells under the microscope, researchers can learn where that gene is active.

These studies wouldn't be possible without the nourishment that Gray provides, according to Wieschaus.

"His presence, and the incredible reliability with which he has produced fly food for over 40 years, has been central to my lab’s work," Wieschaus said. "You can’t have a conversation with Gordon and not be impressed by how much he cares."

"Gordon is the very exemplar of the depth of talent at Princeton," Levine said. "He is a lively scholar with a deep knowledge and passion for literature and movies. I always learn something new during our encounters." 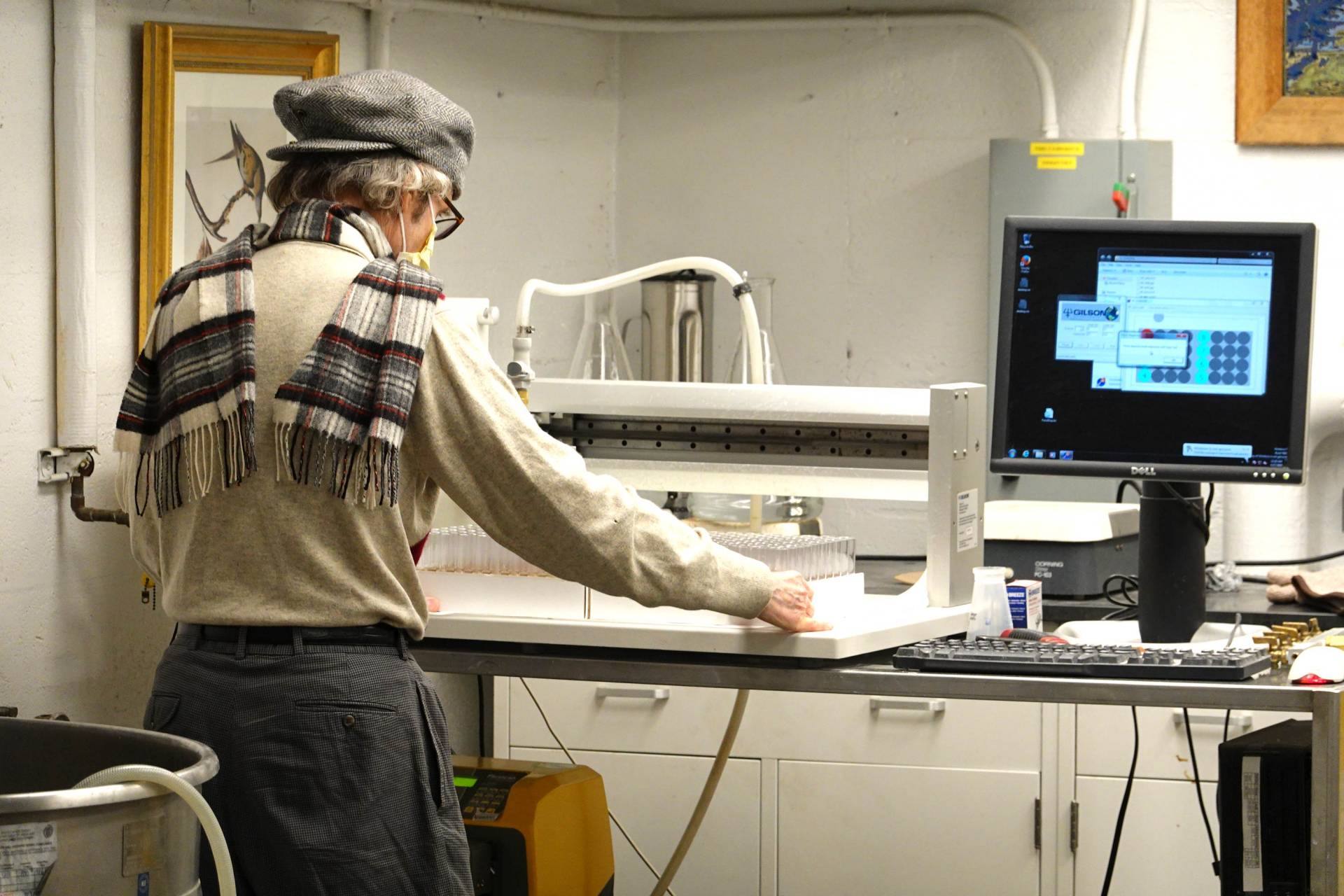 Gray uses a robotic system to dispense the liquid food into the tubes. In the 1990s, he co-invented a machine that dispensed fly food into tubes. The machine was marketed through a scientific equipment maker.

Gray earned a B.S. in biochemistry from the University of New Hampshire in 1974 where he experienced the struggle for gay student organizations to exist on campus. At Princeton, he has been an active member of the community. For over 20 years he sang with various choral organizations, including in the University's chapel choir and glee club in the 1970s.

He also conducts his own research. He is an expert on Fulper Pottery, which from 1805 to 1935 produced everyday cookware as well as art pottery at its factory in Flemington, New Jersey. Gray has written extensively on the University’s own William Hill Fulper II, Class of 1895, as well as the history of Fulper Pottery’s materials, glazes and cultural impact. He has lectured on the subject at many museums and historical societies.

Gray, who this year celebrates his 45th year as a Princeton employee, said he enjoys his work in the fly kitchen because he can watch the discoveries unfold, knowing that he is contributing. "I'm able to be part of the research that is moving forward," he said, "and isn't that the whole mission of the University?"

*Put apple cider vinegar in a cup and add a drop of dish soap. The soap destroys the surface tension of the liquid, so the flies cannot land on the surface and instead they sink and drown.