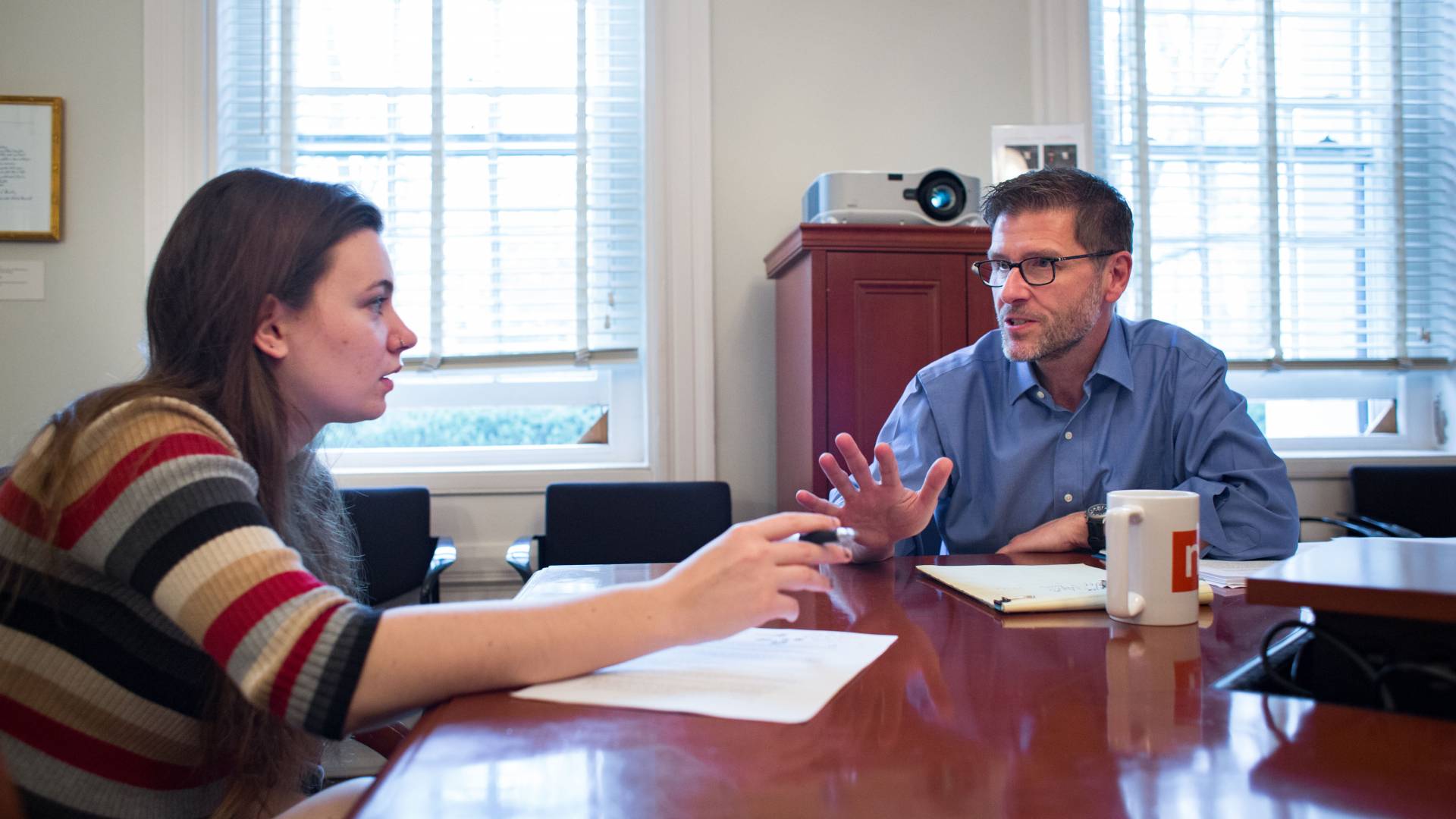 Joe Stephens, founding director of the new Program in Journalism, talks with a student in his “Media in America” class.

In April, Princeton’s faculty voted unanimously to formalize journalism into a program and offer students, for the first time, an undergraduate certificate. The move was part of a broad reshaping of the University’s storied journalism seminars, aimed at meeting swelling demand for journalism courses and recognizing the rapid evolution of the field. It acknowledges the significant expansion and restructuring of the seminars since they were inaugurated 60 years ago by a bequest from former New York Herald journalist Edwin F. Ferris, Class of 1899.

Stephens will remain Ferris Professor in Residence at Princeton, a position he has held since 2014. Before joining the University, he spent nearly two decades as a writer on the investigative team at the Post, where he specialized in in-depth accountability projects.

Stephens’ professional honors include three George Polk Memorial Awards, and he has on three occasions been a finalist for the Pulitzer Prize. His articles have led to Congressional hearings, national legislation, criminal convictions and millions of dollars in fines. Reporting from Europe, Africa, Asia, Latin America and across the U.S., he has won honors from the Overseas Press Club, the Gerald Loeb Foundation, the Society of Professional Journalists, the Scripps Howard Foundation, Investigative Reporters and Editors, and the Annie E. Casey Foundation.

“I am delighted that Joe Stephens will launch our new program at this critical moment for journalism at Princeton and the broader society,” Humanities Council chair Eric Gregory, professor of religion, said. “A highly accomplished journalist with deep contacts in the field, Joe is an extraordinarily gifted teacher and a dedicated adviser and mentor. His vision of journalism as public service, in the distinctive context of a liberal arts education, advances the University’s mission of scholarship and learning in the service of humanity.”

“I’m thrilled to take on this role at a time when there has never been a greater need for objective, trustworthy journalism,” Stephens said. “Our new program is going to aggressively promote public service reporting, diversity and the importance of verified facts in a participatory democracy.”

“At a time when journalism is under assault on many fronts, it’s great to see this University come together and say, ‘This is important for society,'” Stephens said. “Our students have the ability to change the world. We’re going to do everything we can to provide them with the tools and insights they’ll need.”

Since 2014, Stephens has taught courses in investigative journalism, news literacy and international reporting. During summers, he leads teams of student journalists to Greece, where they report out of refugee camps and migrant squats. Stephens has also led the University’s Walter Lord Society, a public affairs discussion group, for the last four years. In 2016, he was named Faculty in Residence at Mathey College.

As director of the Program in Journalism, he will oversee the undergraduate certificate, create new courses and field experiences, and develop collaborations with campus partners, including University-wide programs and events.