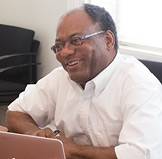 The Ferris McGraw Robbins Professors in Journalism come from the highest echelons of radio, print, television and new media to teach a writing-intensive seminar at Princeton University for a semester. This spring, Keith Richburg, above, a former foreign correspondent with The Washington Post, is teaching "International News." John McPhee, below, the Ferris Professor of Journalism, has taught "Creative Nonfiction" and other writing courses in the program for 40 years. 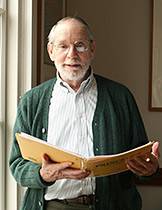 On a recent afternoon, 16 Princeton students pondered a sentence in a Saveur magazine story about candy shops in Buffalo, N.Y. The next afternoon, 16 other students explored questions of ethics spawned by a Rolling Stone article.

These conversations engaged students with the nexus of the journalistic enterprise: the craft of good writing and the art of being a good journalist.

The Ferris McGraw Robbins Professors in Journalism have been teaching seminars at the University since 1964. The program brings prominent journalists to campus for a semester. Students from a variety of disciplines, in addition to those interested in a career in journalism, are admitted by application only. "The seminars are designed to make all students more informed consumers of news and more articulate writers in expressing their views," said Kathleen Crown, executive director of the Council of the Humanities, which oversees the program.

John McPhee, Princeton's Ferris Professor of Journalism and a Pulitzer Prize winner, has taught "Creative Nonfiction" and other writing courses in the program since 1974. He has been joined over the decades by a venerable roster of guest journalists across radio, print, television and new media. Recent offerings include: "Politics and the Media: Shaping Public Opinion through Editorials" with Carol Giacomo of The New York Times' editorial board; "The Foreign Correspondent and the New Media" with National Public Radio's Middle East correspondent Deborah Amos; "Radio Reporting and Storytelling" with Steve Drummond, senior national editor of NPR; "Investigative Journalism" with Pulitzer Prize winner Mike McGraw of the Kansas City Star; and "The Art of Television Criticism" with The New York Times' chief television critic Alessandra Stanley. 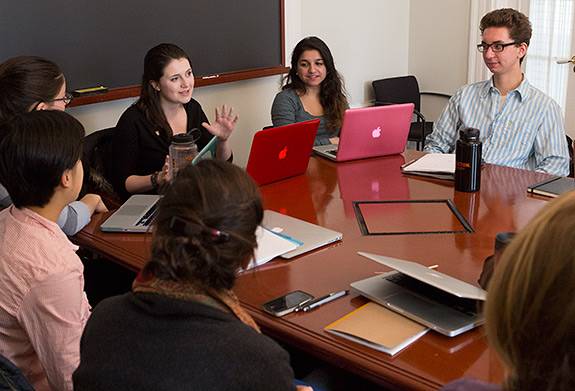 Each week, Richburg's "International News" seminar begins with a round-the-table of news reports from around the world. Junior Alexandra Morton, left, gives the class her summary of news from Russia during the past week.

Below is a snapshot of two seminars being offered this spring.

"Where do I start?" Gufford said. "I've been relying on the Associated Press app on my phone because I get an update every time something happens in Ukraine."

Gufford, who is from East Brunswick, N.J., covers Ukraine and the former Soviet republics for the round-the-table discussion of news reports from the past week that begins every "International News" class. Richburg has assigned each student a "beat" — a region of the world or a theme. The primary focus is to monitor how the U.S. media covers the world. Students also contribute to a class blog.

"As members of the class go round, I find it really fascinating to hear other students' takes on what is happening in other areas of the world," said junior Alexandra Morton of Dalry, Scotland. An English concentrator who is also pursuing a certificate in Russian language and culture, she has been assigned to cover Russia for the seminar.

Morton, who plans to pursue a career in journalism, spent much of her childhood living in the Middle East and Europe. "I have always been interested in global and international affairs," she said. 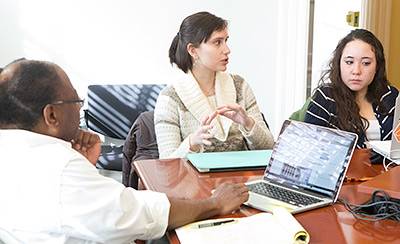 Freshman Jacqueline Gufford, center, reports from her assigned "beat" — Ukraine and the former Soviet republics: "I've been relying on the Associated Press app on my phone because I get an update every time something happens."

Sophomore Kate Kaneko of Somerville, N.J., spent last summer in Bangkok with Princeton in Asia and the Health Grand Challenges Program. She reports on Southeast Asia. After a discussion about the disappearance earlier this month of Malaysia Airlines Flight 370, Kaneko said: "My takeaway was seeing an example of the media's ability to impact the audience's emotions and fears when there is a lack of facts. It is interesting to see how easily the public will jump on any available lead that arises and the danger that could potentially cause."

The class is structured around case studies that focus on how the American media write in support of or against war, human rights reporting, the challenges of writing about specific parts of the world from China to Africa, and how new media are altering the landscape of foreign correspondence. Readings include Richburg's memoir "Out of America: A Black Man Confronts Africa," "Bush At War" and "Plan of Attack" by Bob Woodward, and "Consent of the Networked: The Worldwide Struggle for Internet Freedom" by Rebecca MacKinnon.

The professors often bring colleagues to visit. Guests in Richburg's seminar have included Bay Fang, former U.S. News and World Report correspondent in Beijing, Baghdad and Kabul, and former deputy assistant secretary of state for public diplomacy; and Rajiv Chandrasekaran, The Washington Post's correspondent in Baghdad and Kabul and the author of "Imperial Life in the Emerald City" about Iraq, which became the feature film "Green Zone."

Richburg said teaching at Princeton "has been all that I hoped it would be —intellectually invigorating and a chance to impart some of my experiences and knowledge to a smart and worldly group of students eager to learn the tricks of our trade."

Richburg wants to help students become better writers. "Having good writing skills will be essential, whether they choose journalism, diplomacy, business or any other field," he said. 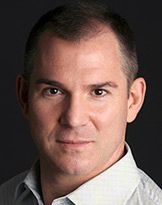 Frank Bruni begins class by asking students to name pieces of food writing they've read in the past week that worked particularly well and to explain why.

On one afternoon, Isabela Pena-Gonzalez of Pharr, Texas, a sophomore majoring in the Woodrow Wilson School of Public and International Affairs, chose a piece about amontillados from the New York Times dining section — required weekly reading — by wine and spirits critic Eric Asimov.

"I found myself getting kind of lost in it — it was so much more than a review," Pena-Gonzalez said. "I was getting a history on the wine, and I felt like I was learning about the cultural relevance — he even plays off the 'Cask of Amontillado' story by Edgar Allen Poe."

Pena-Gonzalez said she applied for the class because it "sounded like a once-in-a-lifetime experience I couldn't pass up." It is her first journalism seminar and she plans to take more. "Professor Bruni's feedback and willingness to help us on our writing assignments has been amazing," she said.

Class writing assignments are paired thematically with readings. Up for analysis are Bruni's memoir, "Born Round," Michael Pollan's "The Omnivore's Dilemma," passages by celebrated food writers such as M.F.K. Fisher, and food websites and blogs of the students' choosing. Each student writes, for example, an autobiographical piece about an important experience, conflict, theme or moment in their lives seen through the lens of food; a newspaper-style "hard news" article on some aspect of the ecology of food; and a description of a beloved dish, ingredient or culinary tradition.

Class discussions can veer from the eaten path. On this particular afternoon, Bruni, who is an op-ed columnist and former restaurant critic of The New York Times, asked students to comment on excerpts of non-food-related stories he'd emailed them minutes before. "I always want to talk about what makes a piece of writing really good," he told them. "Each of these I've chosen because each does certain things spectacularly well."

During a moment's pause while the students opened their laptops and read a passage by New York Times contributing science writer Natalie Angiers about why dragonflies are such successful hunters, Bruni said: "I see a few people smiling. That makes me happy. This is pretty wonderful writing, right? Let's talk about why it's wonderful."

Bruni said he hopes students will walk away from the class "more thoughtful, articulate, organized and evocative writers."

At its half-century mark, the journalism program is moving in exciting directions, said Crown. Evan Thomas, former Newsweek editor-at-large and author of eight books and more than 100 cover stories, is completing his turn as the program's inaugural five-year Ferris Professor in Residence. In fall 2014, Joe Stephens, an investigative reporter with The Washington Post who has won three George Polk Awards and taught a seminar at Princeton in 2012, will return to assume the next residency.

Crown also notes the program's new trajectories — into digital humanities and media studies — working with other departments across campus in interdisciplinary endeavors.

She credits the commitment of the council's former executive director Carol Rigolot and McPhee — "the Platonic ideal of a Ferris professor" — for developing the program into a thriving platform "to equip global citizens to understand the media, in the U.S. and abroad."