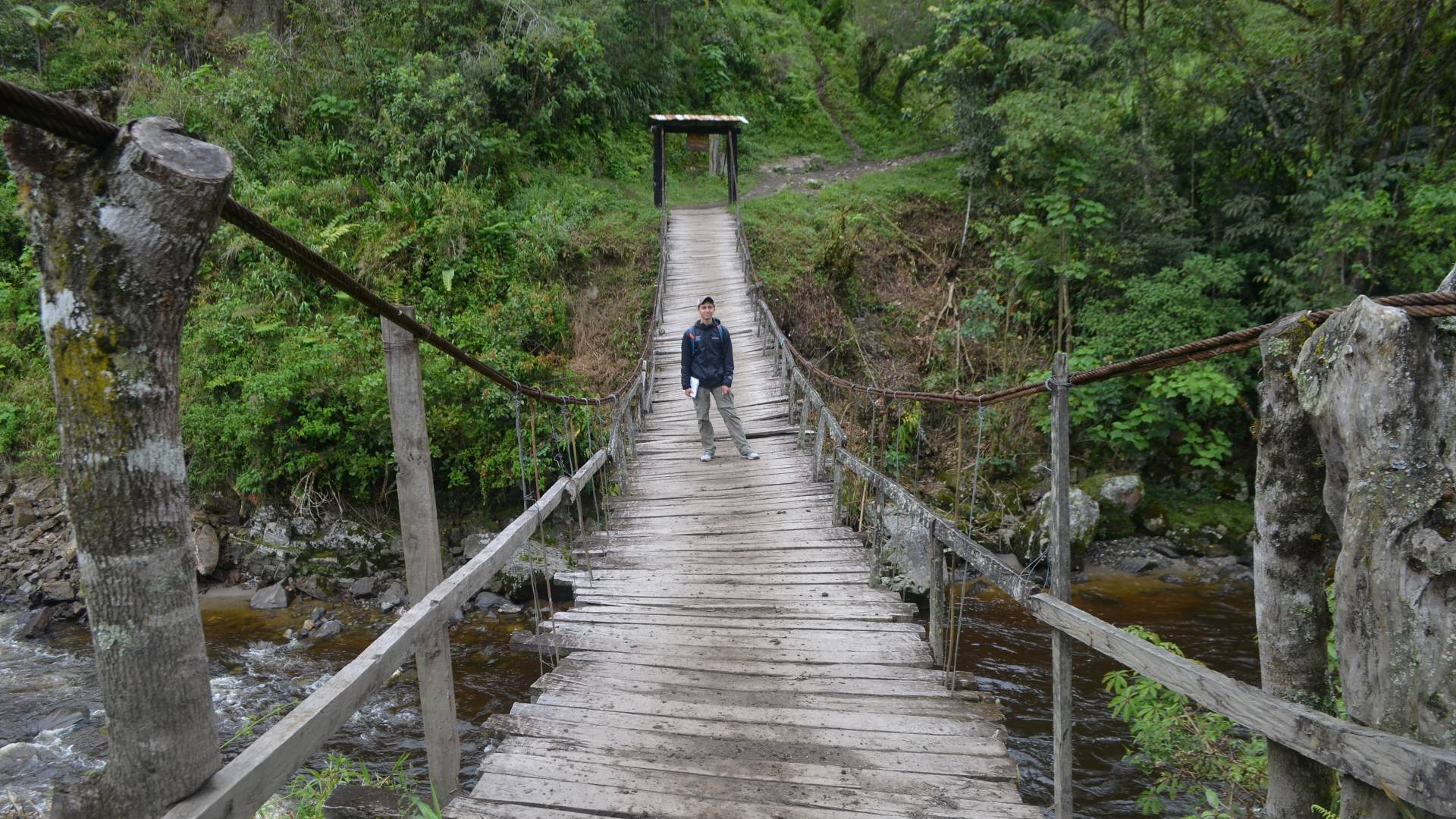 For his senior thesis, Jordan Salama is writing about the people and places along Colombia’s main river, the Magdalena. Pictured: Salama stops on a bridge along the Upper Magdalena, in the village of Quinchana, near the river's source in the Andes, during a hike with an archaeologist to see some of the region's famous pre-Columbian monolithic statues.

Senior Jordan Salama’s earliest connection to Colombia came through the piano in his living room in Pelham, New York — 2,500 miles away from the country that would fire his imagination during his time at Princeton.

When Salama was 6 years old, his piano teacher, Sandra Muñoz, a native of Colombia, would play “these rambling, loud, energetic salsas and arabesque music during the breaks between scales and whatever piece I was painstakingly attempting to play. And our piano would come to life,” Salama said.

For his senior thesis, Salama, a Spanish and Portuguese major, is producing a nonfiction book of travel writing about the people and places along Colombia’s main river, the Magdalena. [Editor's update: "Every Day the River Changes," an adapted version of Salama's thesis, will be published by Catapult Books in 2021.]

Salama took his first trip to Colombia for a month-long independent project during the summer after his first year at Princeton, with funding from his department. He stayed with his piano teacher’s grandmother in the city of Cali for the first two weeks, where he translated conservation news bulletins from Spanish into English for the Wildlife Conservation Society (WCS) in their Cali office. Each night, over pasta dinners, Salama practiced his conversational Spanish with his 97-year-old host. His project included an excursion to Cotocá Arriba, a village on the shores of the Sinú River, where the WCS was supporting a river turtle conservation project. Villagers trained by WCS biologists searched for turtle nests, collected eggs, incubated them and then released the baby turtles into the river after they were born. Salama’s project concluded with a visit to the remote Darién Gap border region with Panama.

“I was trying to learn about how people relate to their natural environments in different regions of Colombia,” Salama said.

He came back to Princeton with a notebook full of stories about the people he’d met. “Everybody told me there was this place called the Magdalena River that I had to go to,” Salama said. The summer after his junior year he returned to Colombia, with senior thesis funding, to travel the 950 miles of the river — and filled three more notebooks.

A passion for storytelling and travel runs deep in his family, Salama said.

Growing up, he heard stories about his paternal great-grandfather, who moved from Syria to Argentina in the early 20th century and worked as a traveling salesman on horseback in the Andes. Salama’s mother, Mona Gabbay, a 1988 alumna, shared stories of her native Iraq. “My great great great-grandfather in Baghdad had a caravan of 1,000 camels and traveled the Silk Road,” Salama said.

Creating a ‘line of trust’ along the river

As he made his way along the Magdalena, Salama likes to say: “I was traveling by myself but I was never alone.”

He did extensive planning to ensure there was someone meeting him every place he went. Fernando Chaparro, a 1972 graduate alumnus and director of the Society, Knowledge and Innovation Program at the Universidad Central in Bogotá, “connected me with people who then connected me with other people as I went along the river, which created a line of trust,” said Salama.

Salama traveled by bus, riverboat and motobalinera — a wooden contraption fixed with rail wheels, propelled by a motorcycle along train tracks — allowing him to spend time with the people in the towns along the banks of the Magdalena.

“It is Colombia's most important river, culturally and socially, in the diversity of peoples and landscapes it passes through, and economically, in that it provided an early link from the coast to the inland capital,” Salama said. “It was a center for trade and transportation and literally built Colombia from the ground up in the early- to mid-20th century. They call it the ‘Mississippi of Colombia.’”

In Neiva, Salama spent time with Delfín Borrero, who has been building artisanal wooden canoes on the banks of the river for decades. From the isolated village of Estación Cocorná, he went on a riverboat expedition with wildlife biologists who are studying the Magdalena's invasive hippopotamuses (the only members of the species living in the wild outside Africa) and the ecological deterioration of the river.

He visited Simón Villanueva, one of Colombia's oldest silver filigree jewelers, in Mompox. (An essay he wrote about this experience was published in the Harvard Review of Latin America.) He rode two donkeys named Alfa and Beto through pasturelands with Colombia's "Biblioburro," established by Luis Soriano, whose life's work has been to create a traveling library for schoolchildren in rural areas who have limited access to books.

“The people shared with me stories of life in the Magdalena River basin, considered by many to be the heart of Colombia, as the country undergoes a drastic transition from a violent civil war to a time of peace,” Salama said.

The Colombia he got to know is not the Colombia most Americans think about, Salama said.

“I benefited so much in this project from the kindness of people who gave me places to sleep, food, connections. I trusted people and they trusted me. And now all that I want to do is to do them justice in the story, because they're good people,” he said.

Trips to Cuba, Spain and Portugal as part of his Princeton courses also fueled Salama’s penchant for storytelling. Christina Lee, associate professor of Spanish and Portuguese, observed how easily Salama started conversations with strangers, often using soccer as a medium for connection.

“I think that as soon as Jordan enters a new site, he has an almost instinctive need to hear a story that brings that particular space to life,” said Lee, who became Salama’s thesis adviser.

Salama has taken nearly a dozen creative writing and journalism classes at Princeton. Two classes in particular sharpened his writing skills for his senior thesis.

As a sophomore, Salama took fiction writing with Joyce Carol Oates, the Roger S. Berlind ’52 Professor in the Humanities, Emeritus, and professor of creative writing, emeritus. He said the course was “fantastic” but discovered he “felt uncomfortable having to make things up about what I saw [in Colombia], because what I found was so interesting — the people I met, the things I heard.”

The next semester, in John McPhee’s creative nonfiction course, Salama discovered a genre he had never heard of. “I wanted to be able to tell a true story,” Salama said. “And that's precisely what Professor McPhee’s class did for me.”

McPhee, a Ferris Professor of Journalism and contributing writer to The New Yorker for over 50 years, has been teaching his legendary course at Princeton each spring for 40 years. Salama found in McPhee a mentor and fellow enthusiast of nature.

“In my course, Jordan's performance was consistently on the highest level,” McPhee said. “This level included not only writing ability, promptness and care, but also imagination in thinking up his free-choice projects.”

As an example, McPhee recounted the time Salama took a fishing rod down to Lake Carnegie: “He’s a reporter with a prop. He goes along the towpath, encountering fishermen and interviewing them. And who does he find there but a guy — a voluble, interesting, quotable guy — who was once a prizefighter and fought George Foreman in the ring and sparred with Muhammad Ali!”

McPhee later read Salama’s junior paper — in which Salama retraced his great-grandfather’s route along the Andes — calling it “as outstanding as all his other work. This is a born journalist.”

A river runs through it: Shaping the story

Salama’s advisers guided him during the writing process. Lee commended Salama’s ability to capture details and encouraged him to shape them into a unifying theme.

“That has been the single greatest challenge with my thesis,” Salama said. “Yes, there is one river that unifies all these places, but it can't just be the river. The river has to be supplemented to give it greater meaning.”

Poring over a two-volume book of travelogues about the Magdalena, Salama observed that other writers, traveling in earlier eras by steamboat, “treated the river as nothing more than a highway,” he said. “They passed by all these places but don't talk about what's going on along the way.”

He noted that, over time, as prospectors consumed the wood in the forests to build steamboats and stripped the land for pastures and agriculture, the lack of roots could no longer hold back the land from sliding into the river, causing it to become wider and shallower — and no longer navigable by steamboat. 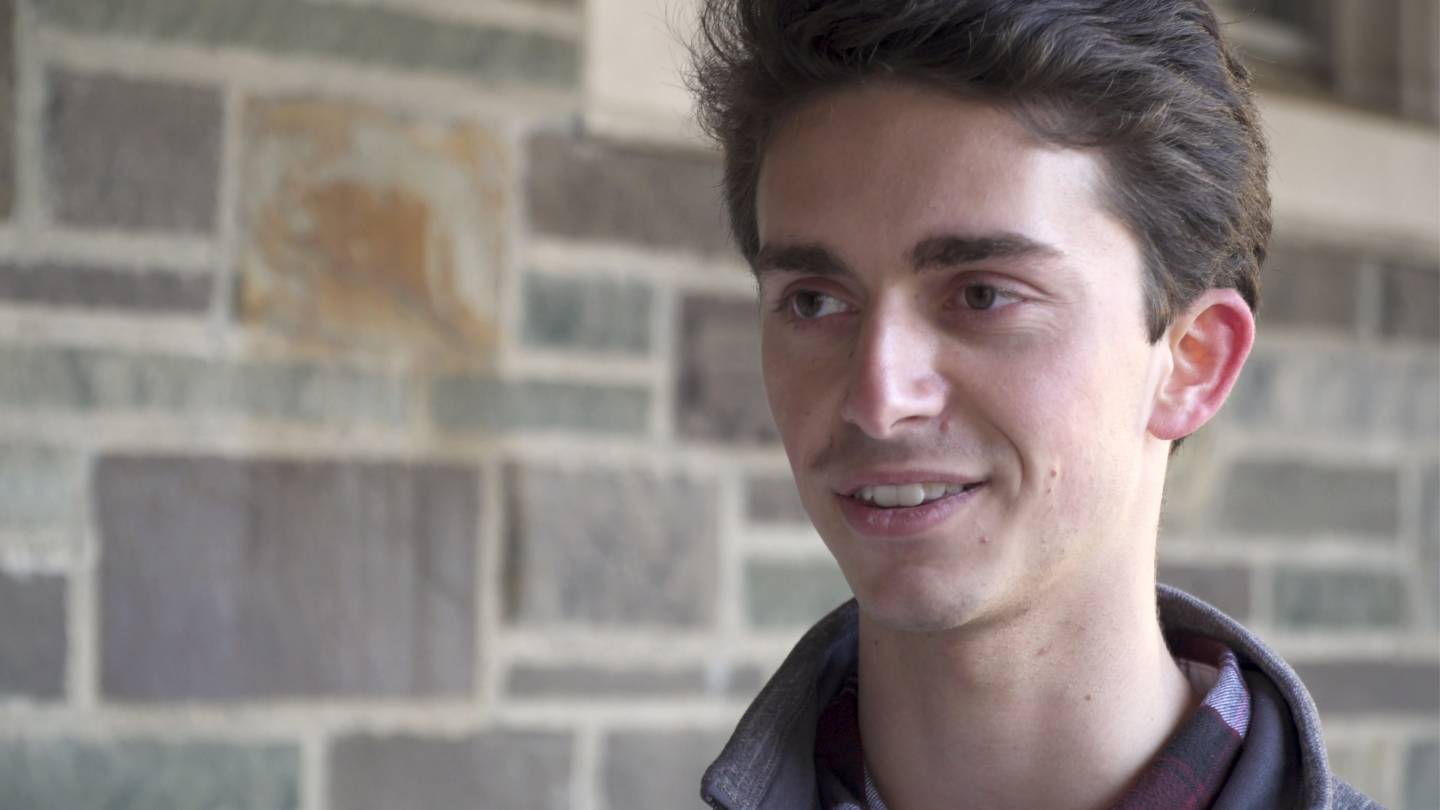 Play video:
Play Video: Princeton senior Jordan Salama reads an excerpt from his thesis, in which he travels by motobalinera along the banks of the river.

As he made his way along Colombia’s Magdalena River, Salama traveled by bus, riverboat and motobalinera — a wooden contraption fixed with rail wheels, propelled by a motorcycle along train tracks — allowing him to spend time with the people in towns and villages.

Salama’s own journey took him constantly on and off the river. “That's what brings the story together,” he said. “It's not the river; it's the people who live along the river and their stories.”

“One challenge we've been working on is moving away from the seemingly objective lens of a news journalist to the more soulful vantage point of a writer who is contemplating a place through his interactions with its people,” said Daphne Kalotay, Salama’s second thesis adviser, and a lecturer in creative writing and the Lewis Center for the Arts. “In other words, not being afraid to include more of himself in the picture he's painting.”

Kalotay said she is impressed by “the sheer scope of this project, telling the history of a country through the story of a river by following a physical path that is in fact ecological, political, cultural, sociological — one that moves from village elders to new migrants from Venezuela.”

Salama will have the opportunity to merge his love of storytelling, television and Latin American culture after graduation. A recipient of a ReachOut fellowship, he will travel next year throughout the United States, Canada and Latin America to create an online children's video series, “Lulus America,” in conjunction with Sesame Workshop.

Salama gained experience in television at Princeton — through an internship at CBS’ “60 Minutes” and by co-creating “Princeton Tonight,” the University’s broadcast television show and entertainment organization. Ever the storyteller, Salama said one of his “defining moments at Princeton” happened in fall 2017, when he found himself giving Art Garfunkel an informal tour of campus, an hour before his “Princeton Tonight” appearance.

When they entered the Princeton University Chapel, Garfunkel started singing “The Boxer” loudly. A janitor tapped Garfunkel on the shoulder.

“I thought he was going to ask for an autograph or a photo,” Salama said, “but he said, ‘Community members can only sing on Wednesdays.’” 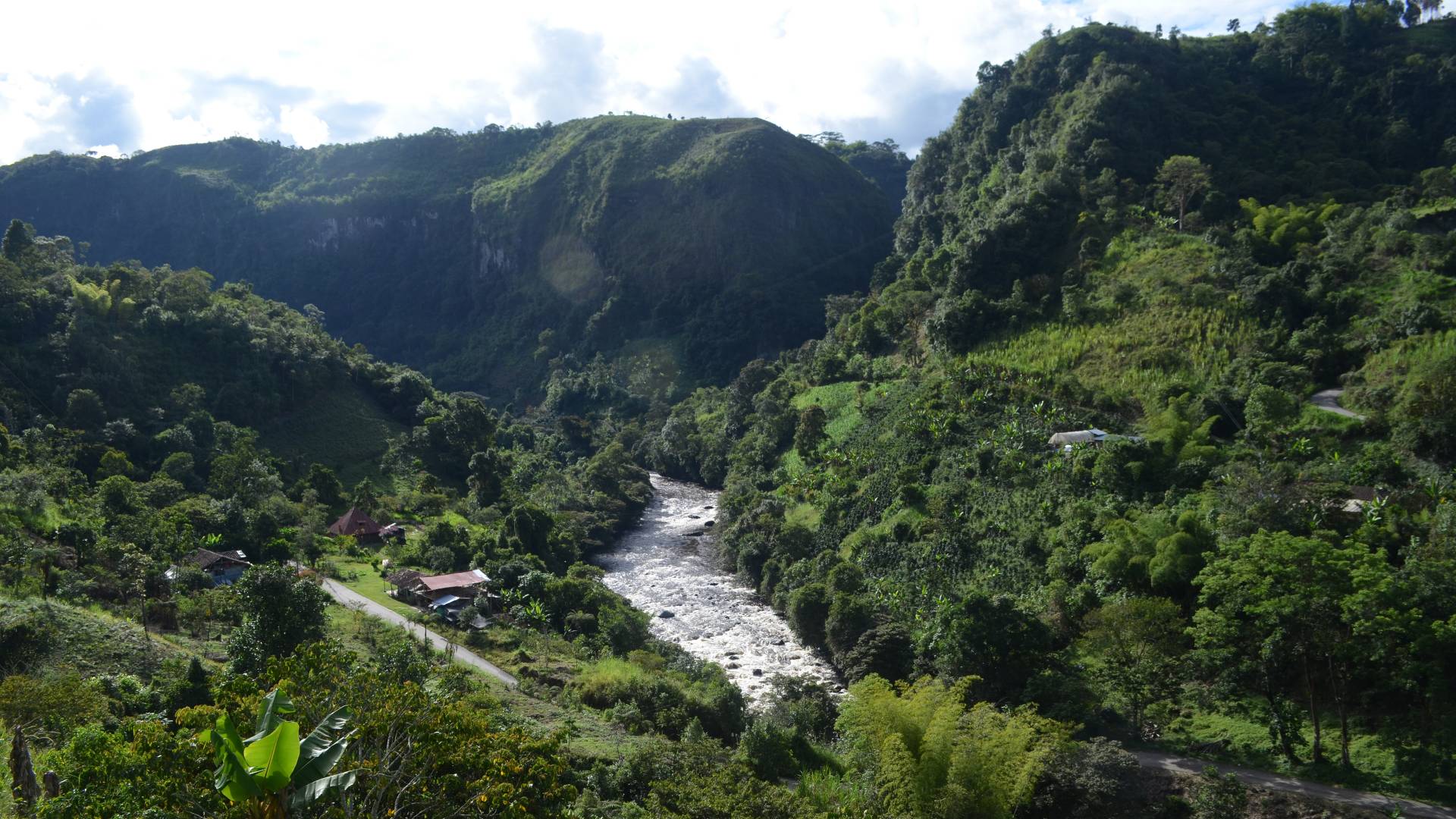 The Magdalena River flows through the lush hills of the Colombian Massif, near its headwaters.