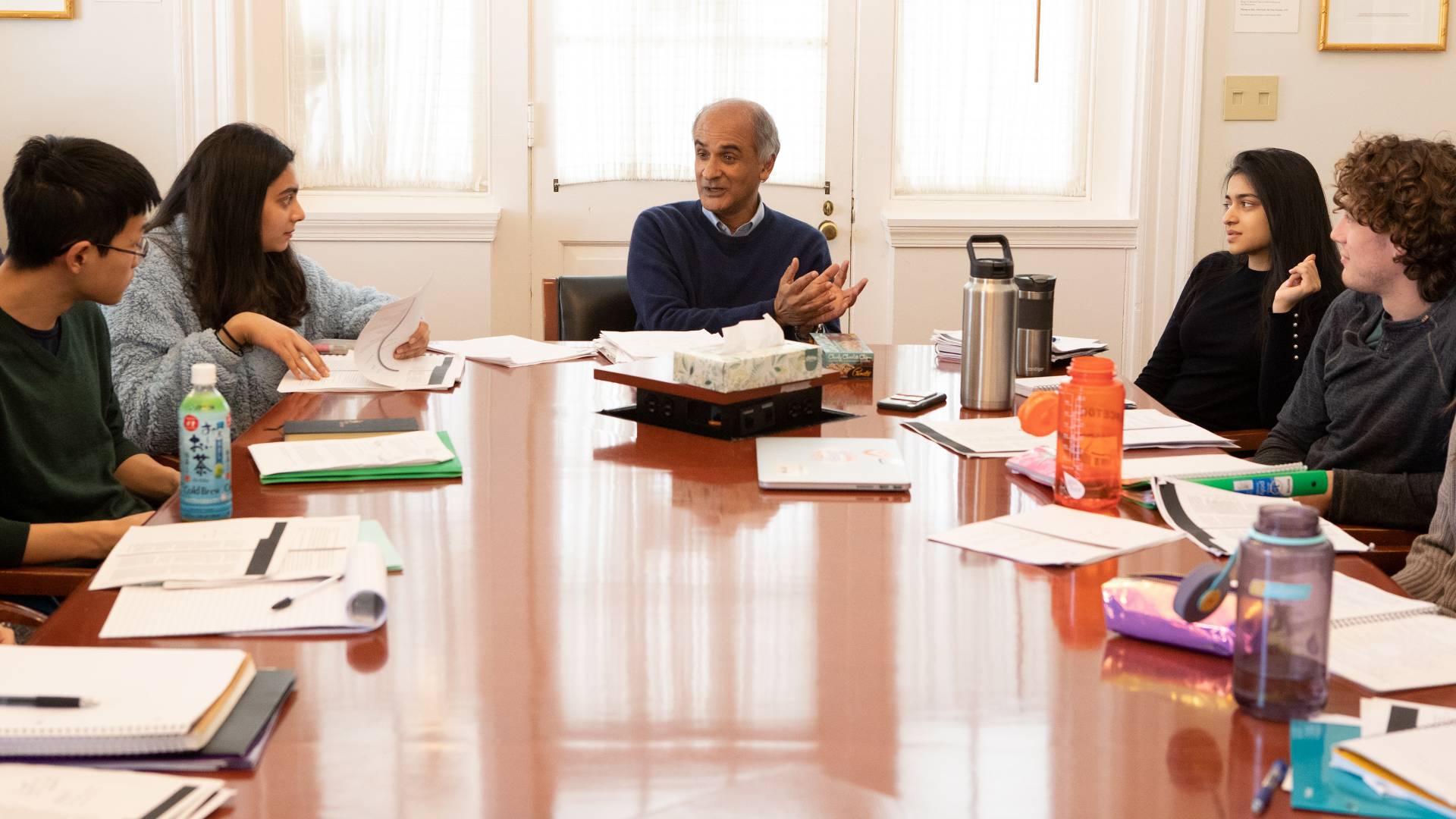 Essayist Pico Iyer, a visiting lecturer in the Humanities Council and a Ferris Professor of Journalism at Princeton, shares stories about his writing and travel across 80 countries with students in his spring semester course, “The Literature of Fact — Writing and Reporting on Place.”

Exploring the idea of place is taking students enrolled in essayist Pico Iyer’s spring journalism course well beyond the geographic coordinates of the Princeton campus.

“Issues about home and belonging and juggling cultures are going to be a theme throughout their lives,” said Iyer, a visiting lecturer in the Humanities Council and a Ferris Professor of Journalism at Princeton this spring. “And I think happily, because it’s a theme I share.”

In teaching “The Literature of Fact — Writing and Reporting on Place,” Iyer said he has been impressed by the global outlook and awareness of his 16 students, who have striking travel stories of their own.

A former staff writer and longtime contributor for Time, Iyer is the author of two novels and 11 works of nonfiction, many of them travel-related. His titles include “Falling Off the Map: Some Lonely Places of the World,” “The Art of Stillness: Adventures in Going Nowhere,” “The Global Soul: Jet Lag, Shopping Malls and the Search for Home,” and “The Open Road: The Global Journey of the Fourteenth Dalai Lama.” 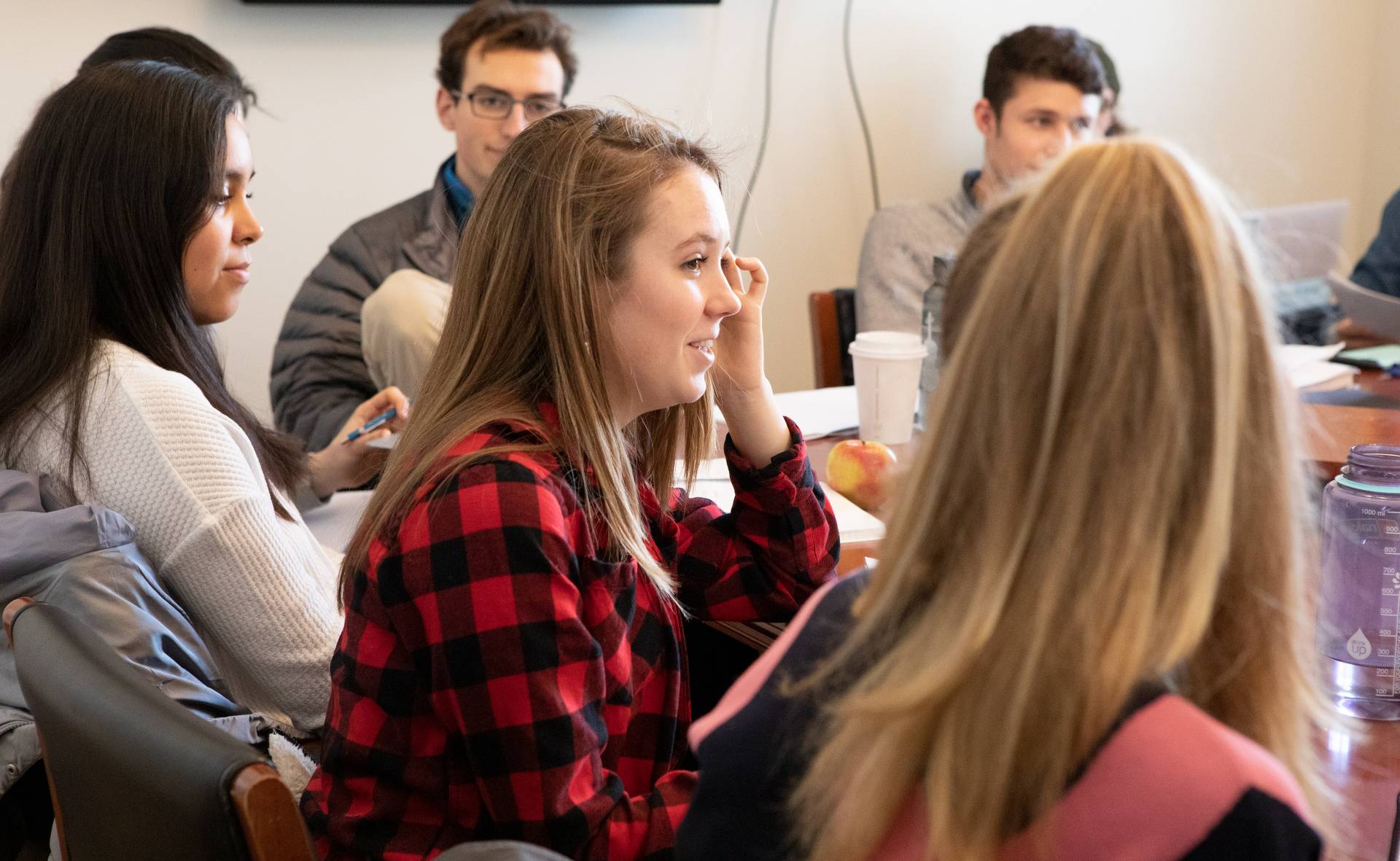 Many of the students enrolled in the course are already well-traveled, Iyer said. Owen Matthews, center, a first-year student, participated in Princeton’s Novogratz Bridge Year Program in China and was excited to find Peter Hessler’s “Oracle Bones,” on the course reading list.

His explorations have taken him to at least 80 countries over the years, including places like North Korea, Easter Island, Ethiopia and Bhutan, he said. His students — a mix of first-years, sophomores, juniors and seniors, some of international origin — have already been keeping their own count. Several have traveled with funding from Princeton University, such as for senior thesis research.

A lifelong itinerant, Iyer was born in Oxford, England, to Indian parents who moved to Santa Barbara, California, when he was 7, though Iyer continued his schooling in England.

“Even then I realized I’m 100 percent Indian by blood, but I’d never been to India and don’t speak a word of any of its languages, and I’m 100 percent English by birth, but no one would ever take me for a traditional Englishman,” he said. “I’m 100 percent American by residency, but I don’t really feel American after many years here. So everywhere in the world is partly foreign to me and therefore endlessly interesting.”

Iyer and his wife reside near Kyoto, Japan, where he has lived for 32 years. For the spring 2019 semester at Princeton, Iyer said he is happily lodged at Olden House, just a seven-minute walk from where he teaches at Joseph Henry House. 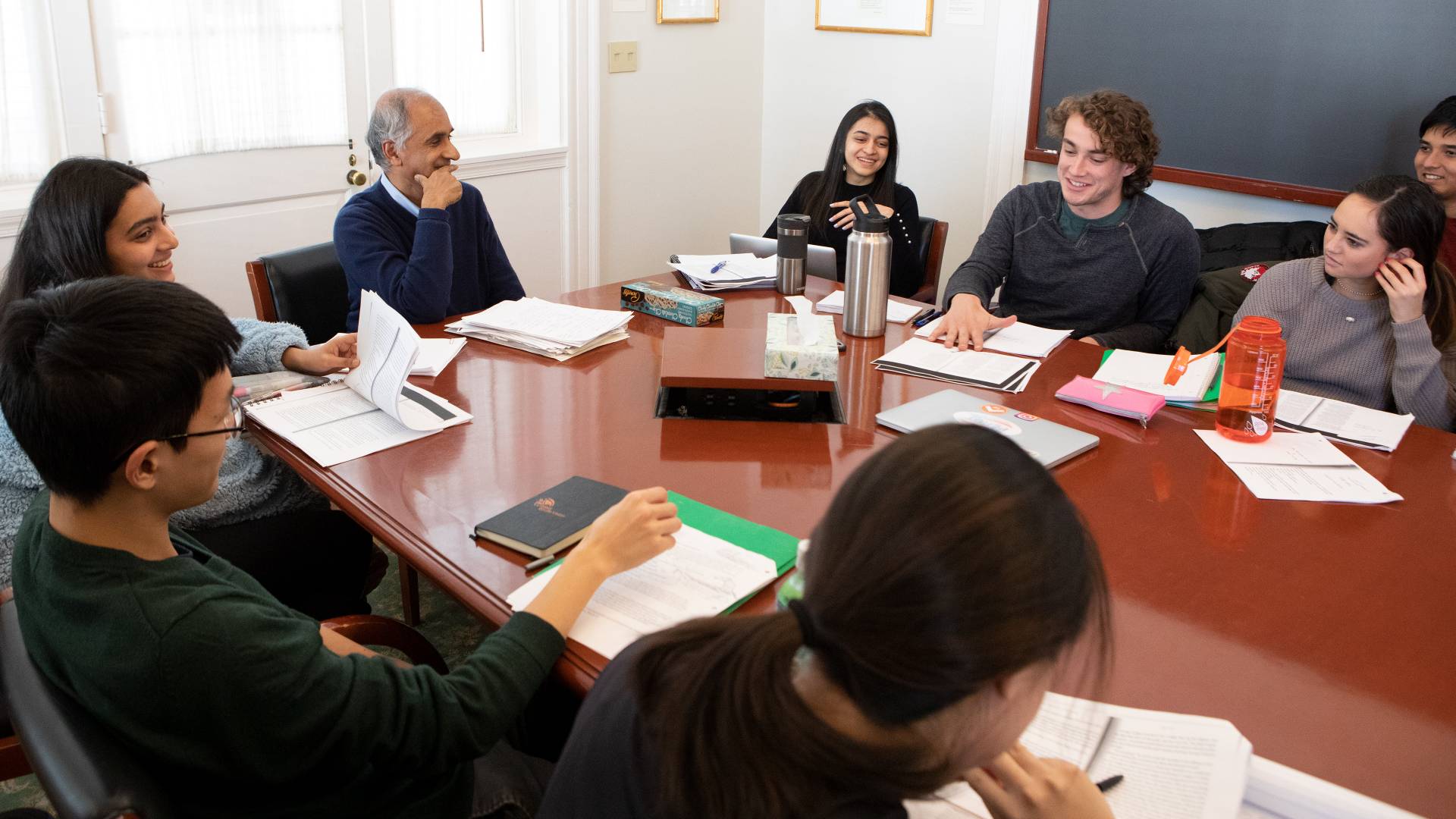 Iyer and his students gather once a week in a small room in Joseph Henry House. Lively conversations about writing and travel sustain the nearly three-hour class. Guest speakers have included James Kelly, former managing editor of Time, and Colleen Kinder, co-founder and editor of the online travel magazine Off Assignment.

Iyer’s latest book, “Autumn Light,” a nonfiction narrative about life in his Japanese neighborhood, will be released April 16. He has two more books debuting this year: “This Could Be Home: Raffles Hotel and the City of Tomorrow,” and “A Beginner’s Guide to Japan.”

Given his students’ well-developed wanderlust, Iyer said he’s mostly focused on providing them a foundation for their writing that calls upon aspects of both journalism and creative nonfiction.

The class meets once a week for almost three hours. Before each session, students are asked to read two travel essays or book excerpts and write a 500-word response. Short- to medium-length writing assignments are due every other week, and a longform article is a required final project.

On one day, the readings for discussion included excerpts from Donald Richie, an American-born author who lived in Japan for the better part of 66 years, and Andrew McCarthy, the actor and director, who more recently turned to travel writing and now serves as an editor-at-large for National Geographic Traveler.

Iyer used the texts to get students thinking about their own observations in foreign environments and to examine how they might evoke aspects of a culture through a single point of view without being reductive or simplistic. 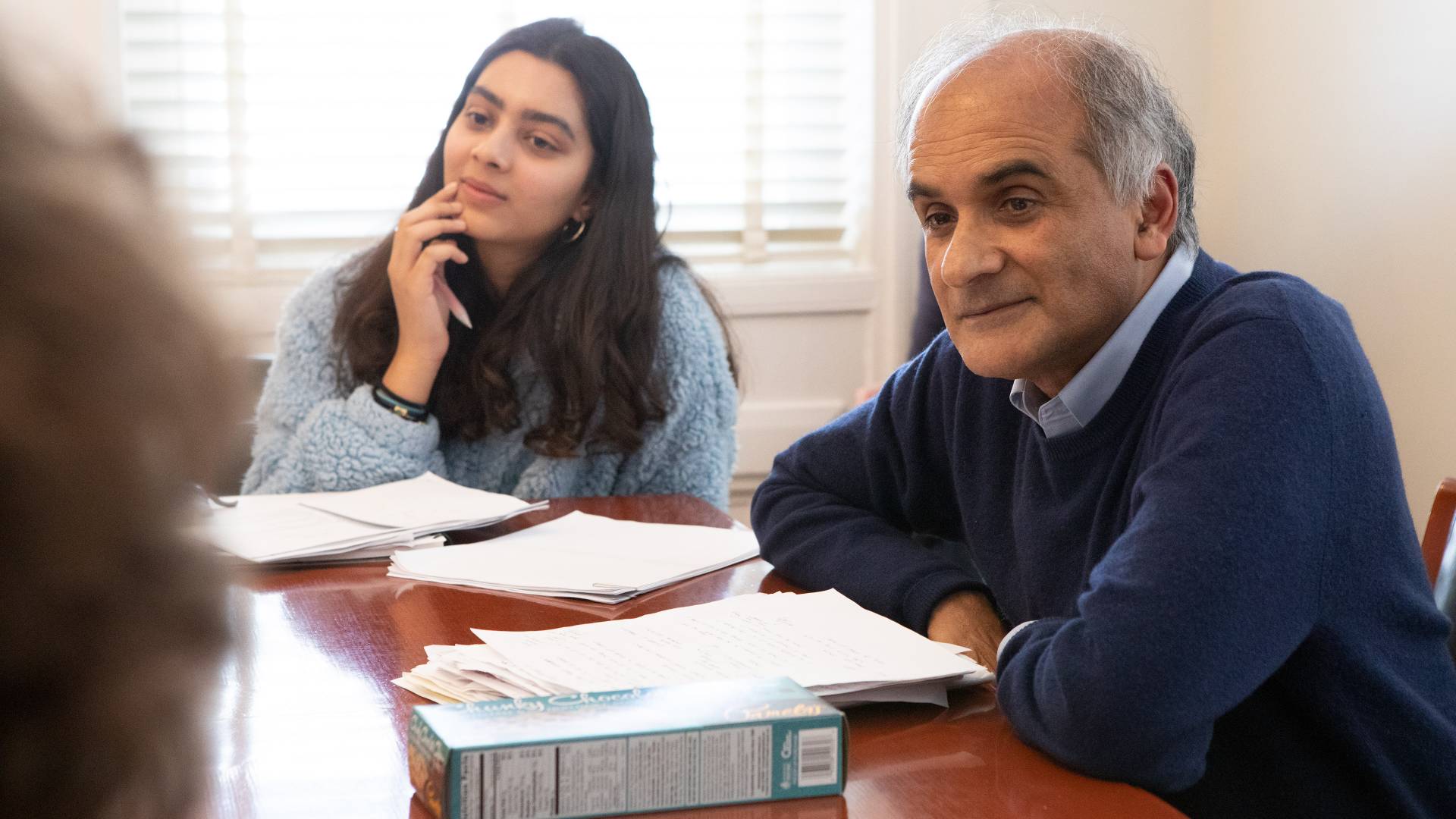 Avanti Divan, a junior, left, and Iyer listen intently as a student discusses his views of the week’s reading assignment. Among the authors whose works are explored in depth are Zadie Smith, Richard Rodriguez, Joan Didion and John McPhee, a Ferris Professor of Journalism in Residence at Princeton.

Also on the syllabus are works by John McPhee, a Ferris Professor of Journalism in Residence at Princeton; George Saunders; Barack Obama; Zadie Smith; and Annie Dillard. Lessons revolve around a variety of loose themes including “The People We Meet,” “Choosing a Self” and “Nowhere is Uninteresting.”

The class brings in guest writers. James Kelly, former managing editor of Time, and Colleen Kinder, co-founder and editor of the online travel magazine Off Assignment, have visited. Richard Rodriguez, who won a Peabody Award for his visual essays on “PBS NewsHour,” and Elizabeth Gilbert, author of the best-selling travel memoir “Eat Pray Love,” are due to appear in the coming weeks.

One of the ideas Iyer hopes students will take away from the class is that “travel writing is most interesting when it goes far beyond travel.”

Owen Matthews, a first-year student, said that after participating in Princeton’s Novogratz Bridge Year Program in China, she discovered she enjoyed travel writing about China. She was excited to find some of the books she’s read, such as Peter Hessler’s “Oracle Bones,” on Iyer’s reading list.

“Thus far, the course has lived up to and exceeded my expectations,” she said. “Professor Iyer is extremely dedicated to his students, and makes himself available for one-on-one meetings every week. At these office hours, we can talk to him about anything from our current pieces to career advice to places we’ve traveled and our relations to them.”

Avanti Divan, a junior majoring in history, said she first read Iyer’s work at her home in Mumbai, and that a piece he wrote about the city was particularly memorable.

“I love stories and people, and I think writing about place and travel yields such an exciting and dynamic interaction between these,” she said. “I also took [the class] as a way to work on my writing.”

Jordan Salama, a senior concentrating in Spanish and Portuguese, whose senior thesis is a nonfiction book of travel writing about people and places along Colombia’s Magdalena River, said he is interested in ordinary people with extraordinary stories that can be told in entertaining, engaging ways.

“Professor Iyer writes precisely those kinds of stories, and is so good at it,” Salama said. “It is a pleasure to learn from him.”

One day, all of Iyer’s students might have similar stories to share with others. “For all of them,” Iyer said, “global life is going to be a part of their future in ways that my generation couldn’t have imagined.”

Iyer will be in conversation with Christy Wampole, associate professor of French and Italian, at noon on April 11 at Joseph Henry House. The event, part of a new discussion series sponsored by the Program in Journalism, is open to faculty, graduate students and staff by reservation only.

He will give a public reading at 6 p.m. on April 24 at Labyrinth Books in Princeton. Iyer also will appear at a campus event held in conjunction with Princeton Writes.

Princeton's next Pre-read is by Class of 2019 graduate Jordan Salama, whose senior thesis became a celebrated nonfiction book