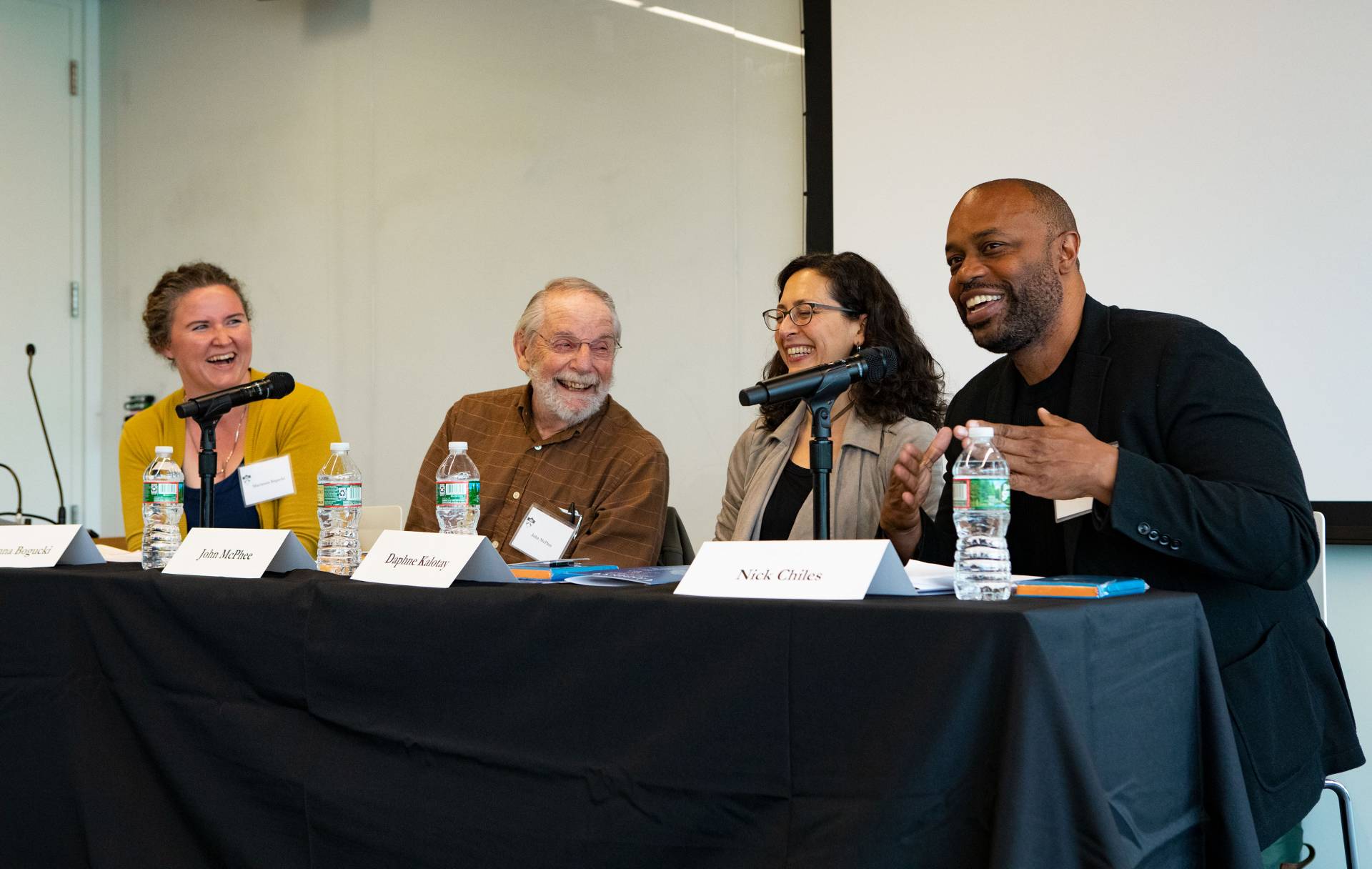 From left: Marianna Bogucki, conference and event manager, moderates the panel “Connecting Through the Written Word,” with writers and Princeton faculty John McPhee, Daphne Kalotay and Nick Chiles. The event was part of the "Connect: Harnessing the Power of Words" symposium for staff organized by the Princeton Writes program.

Some 100 University communicators gathered last week for a Princeton Writes symposium titled “Connect: Harnessing the Power of Words.” The afternoon events on May 2 and 3 offered discussions on the written and spoken work and inspiration for practitioners across campus.

John Weeren, director of Princeton Writes, said: “Language is one of the foremost tools we have for forging human connections. To achieve its full potential, the written and spoken word must affirm our readers’ and listeners’ humanity, while revealing our own, grounded in the belief that our similarities are greater than our differences and that we can achieve more together than alone.”

The Princeton Writes program, established in 2013, offers writing seminars, tutorials and other support for students and staff members looking to strengthen their practical communication skills.

Below are contributions from staff members about the symposium events.

‘A World of Words: Communicating Outside Our Comfort Zones’

Speakers: Pico Iyer, writer and visiting lecturer in the Humanities Council and a Ferris Professor of Journalism this semester; and Aly Kassam-Remtulla, vice provost for international affairs and operations (acting); introduced by Stephanie Whetstone, assistant director of Princeton Writes

In kicking off the symposium, internationally acclaimed writer Pico Iyer said that one of the great lessons of traveling is that “citizen diplomacy” brings people together.

Iyer has traveled to some 80 countries and written 15 books. Iyer and Kassam-Remtulla both have extensive experience moving between different countries and cultures as self-described “nomads” growing up.

Iyer talked about the pleasure of meeting people in everyday settings during his travels, describing how these encounters show how we have more in common than the media or national governments would have us believe.

People in Syria and Iran, for example, “don’t think the way the government does,” Iyer said. He recalled talking to a taxi driver in Iran who complained about the Iranian government and worried about how government policies would affect his ability to support his children.

Kassam-Remtulla said communicating across cultures or points of view is difficult at a moment in history when “tribalism seems to be on the rise” worldwide. “So many of us are in our own media silos so we’re not hearing what other people are saying,” he said.

This spring, Iyer taught a class at Princeton on “The Literature of Fact – Writing and Reporting on Place.” He said he has been pleased to find his students are both “brilliantly gifted” and “so well-traveled.” 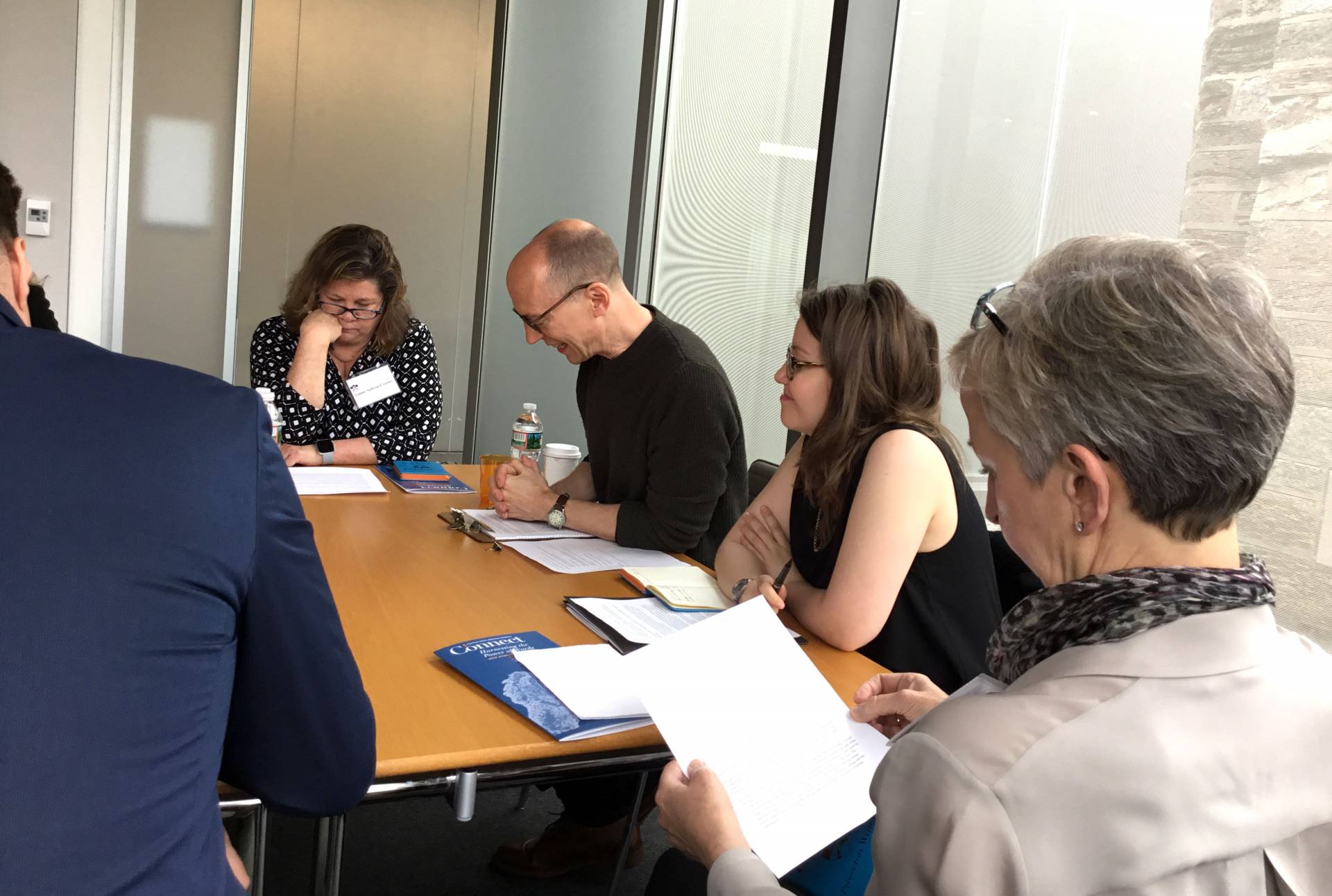 Instructor: Jeff Dolven, professor of English and acting chair of the Department of English

Writing as imitation and a lively examination of the sentence as a “unit of style” were the focus of Dolven’s Friday afternoon master class.

“The sentence is something like a sketch form for writers,” he said. “You can [write one] at any moment that catches you.”

Dolven brought to life his popular Paris Review column “Life Sentence” and asked writers to take apart and put back together sentences by a number of Anglo-American writers, from Oscar Wilde to John Ashbery.

Dolven closed the master class with an exercise: to perform a “stylistic translation” and rewrite a sentence or two from an excerpt of Ernest Hemingway’s “A Farewell to Arms” in the style of another writer discussed in the workshop.

“It can be stimulating to look at writing of the past as a pattern for one’s own,” Dolven said.

—By Pooja Makhijani, Princeton Institute for International and Regional Studies

Panel: ‘Connecting Through the Spoken Word’

Three skilled speakers from divergent sectors of the University community discussed the art of building bridges through the spoken word. Whether the target audience is Princeton alumni, theater personnel, or first-year science students, the panelists generally agreed that any formula for success involves as much listening as talking — echoing what Princeton Writes director John Weeren said in his welcoming remarks that “silence and stillness can be our best friends.”

Sara Judge goes so far as to scribble “LISTEN” on her notepads before conversations with alumni and development colleagues in order to emphasize the importance of absorbing the exchange rather than dictating its direction.

Storytelling is another essential tool, especially if the subject matter is complicated. Howard Stone uses visual aids and demonstrations to teach math and science students of all ages. He leapt from the dais to demonstrate a metaphor for “Brownian motion,” staggering erratically to describe molecular behavior. “I think it’s very important that people understand first the concept and then learn the words,” he said.

Panel: ‘Connecting Through the Written Word’

John McPhee, who has taught writing at Princeton since 1975, said he has some 200 books in his basement that were written by his former students, including by writers who do something else for a living. “If you have to ever ask Google to name doctors who were writers, prepare for an avalanche,” said McPhee.

Nick Chiles, who regularly writes profiles, said that he teaches writers such as his students that “you have a huge responsibility to illuminate people’s lives that the media has failed to do.”

Daphne Kalotay talked about fiction writing having both the freedom of a plurality of voices to choose from and the burden of infinite choices. “You’re always trying to find the angle. In fiction, I can tell the same story from a hundred angles. … so I tell my students to try the third person.”

For the young and the experienced alike, connecting through the written word is not easy — and writer’s block goes with the territory.

“Writers get writer’s block every day,” said McPhee, quoting Joan Didion about the “low dread” of it, adding that “some kind of panic gets me going.”

The writers offered tactics for breaking the block.

Chiles said he stops writing for the day when in the middle of a scene that’s going well, as it makes him want to return to it the next day.

“I always have the lede first,” said McPhee. “There’s no formula. Just jump in and talk about what you’re going to be writing about until you get to something that works. Then you look at all your material and then your lede will then bring you into a structure.”

In answer to a question about when a writer knows when to stop copyediting their own work, the panelists agreed that it’s when they accept they can’t make it any better.

McPhee said what can be encouraging for young writers is to realize that “no two writers are alike; no one will ever write the same way they do.”

“We are reading their theses; they are wonderful,” said Kalotay, affirming that for all its challenges, writing is one of life’s joys. 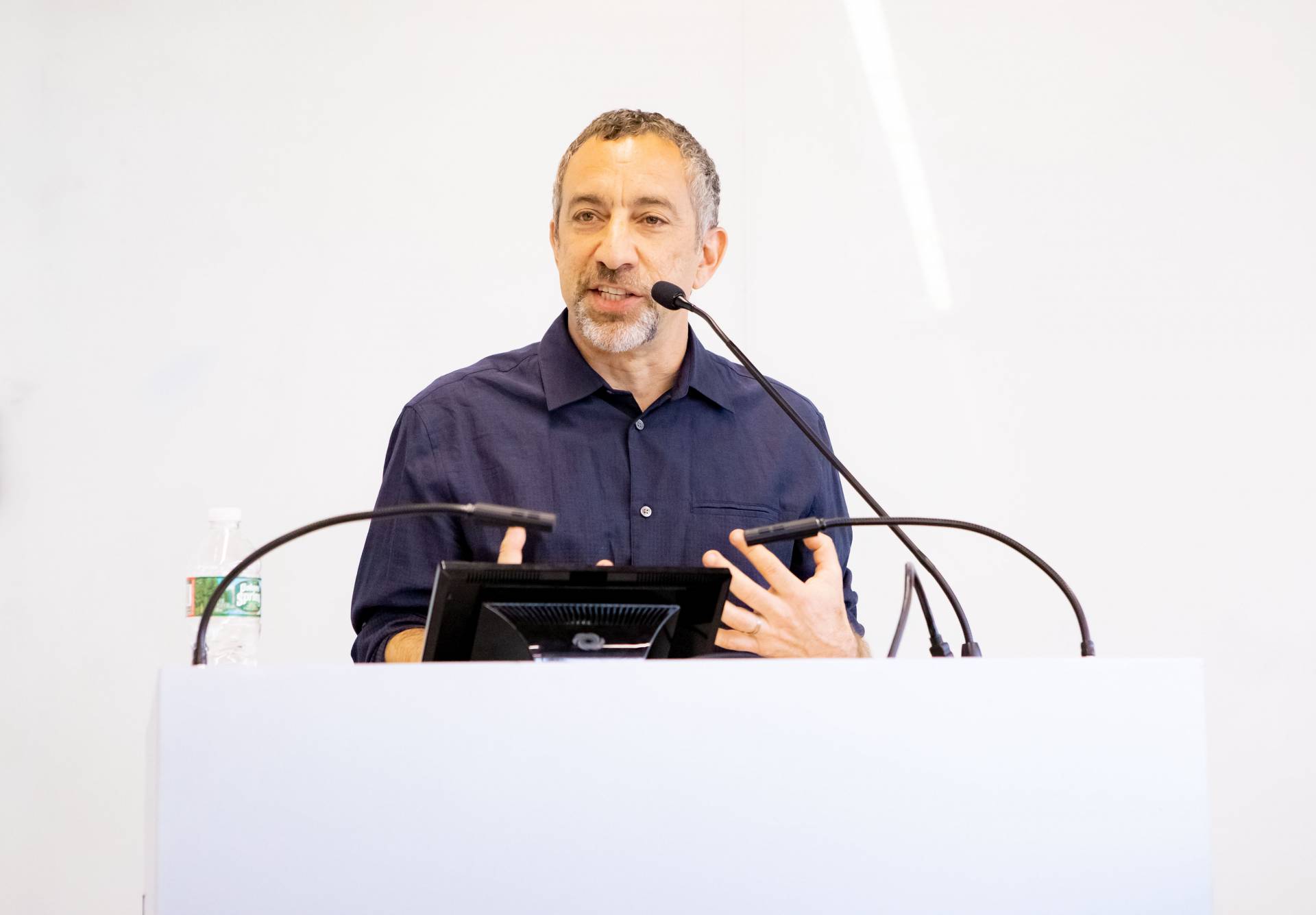 Joe Richman, founder and executive producer of Radio Diaries, delivers the keynote address on how we can embrace our humanity by telling “extraordinary stories of ordinary life.”

Speaker: Joe Richman, founder and executive producer of Radio Diaries; introduced by Joe Stephens, founding director of the Program in Journalism and a Ferris Professor of Journalism in residence

Moments of connection between a character and a listener are strongest when the character is portrayed as a whole person, said Joe Richman.

“When you portray someone in a way that is surprising, and doesn’t fit into … expectations, suddenly they’re not in that box and suddenly you see a real, three-dimensional person,” said Richman, who will be returning to Princeton as a visiting lecturer in the Humanities Council and Ferris Professor of Journalism this fall. “I feel like what I’m going for as a listener and as a producer is those moments when the person is not what you’d expect, when the story is not what you’d expect.”

Richman played excerpts from his award-winning unnarrated series, including an episode featuring a young, gay woman coming out to her parents and another featuring professional boxer Claressa Shields as she was training for the 2012 Olympic trials. Shields went on to win Olympic gold medals in 2012 and 2016.

For Richman, uncovering moments of connection is largely dependent on luck.

“Every good story that I’ve done has luck as a part of it,” he said. “And how much luck you have in a story is directly proportional to how much time you spend hanging out. And I love that part. That’s partly why journalism is so great.”

He left his audience of “makers” with four wishes: First, that they give someone their full attention by giving them a “question bath.” Second, that they make something just for the sake of making it. Third, that they push back against their “producer head” and remember to access their human side. Finally, that they turn their anxiety or writer’s block into more productive energy by reciting the three words, “I AM EXCITED.”

—By Denise Valenti, Office of Communications