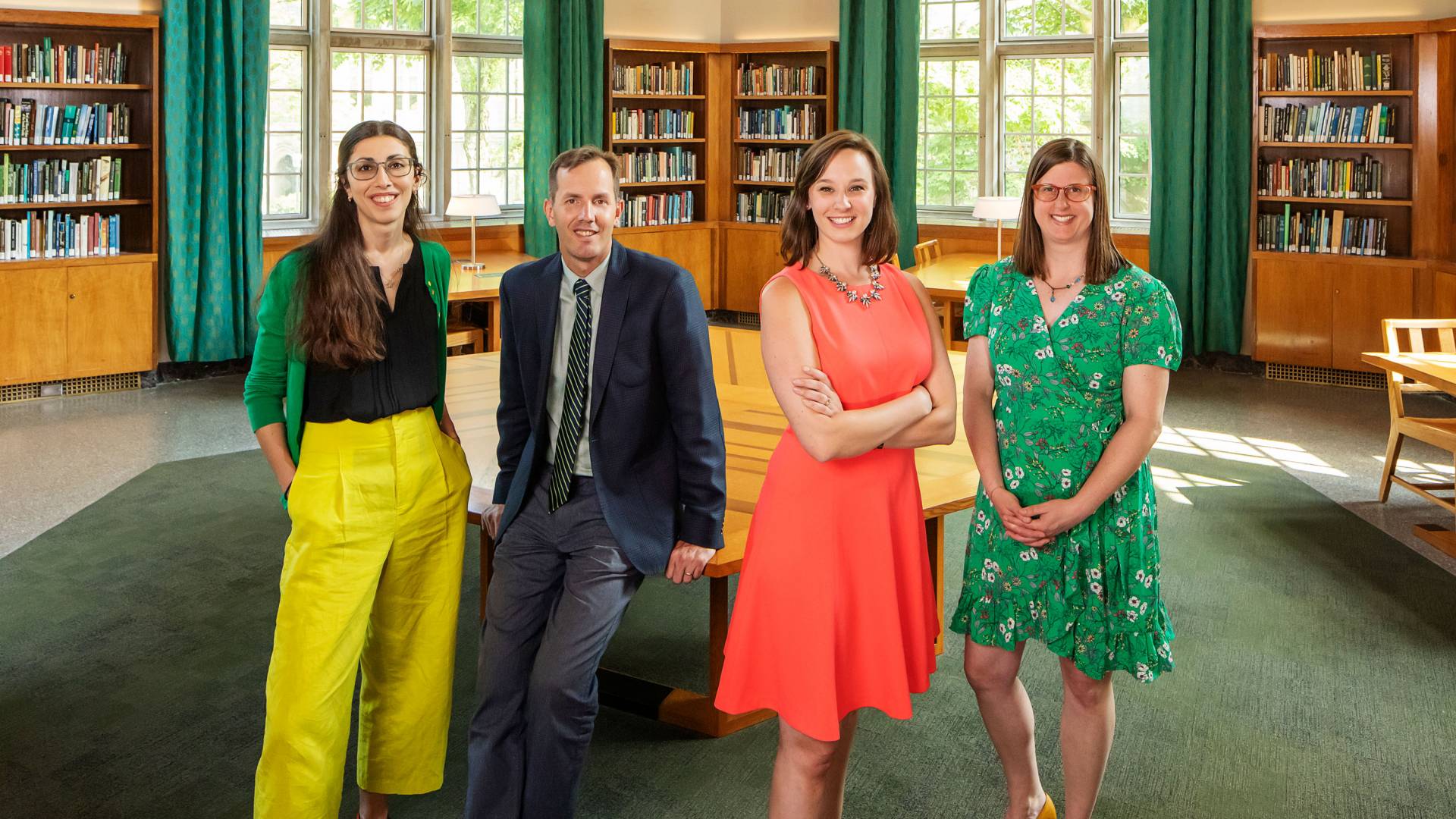 Four Princeton staff members have been honored for their essays in the fifth annual Princeton Writes essay contest.

The 2018-19 contest inspired a record 70 submissions from 44 academic and administrative units. University staff members were invited to introduce a personal community, place or pastime and reflect on its meaning in their lives. An essay by Kira O’Brien, program coordinator at the John H. Pace,  Jr. ’39 Center for Civic Engagement, took the Princeton Writes Prize. Anna Braverman, Jeff Labrecque and Gwen McNamara received honorable mentions.

During a ceremony at Maclean House on June 6, Princeton Writes Program Director John Weeren expressed his admiration for the achievements of contest participants, each of whom, he said, “created something unique and meaningful with care and courage.”

For the four honorees, personal experiences in otherwise humble settings provided the means for telling a universal story. (Each story title below links to the full essay; at the end of each essay is a link to an audio file of the author reading their essay.)

Kira O’Brien told the story of what family means. In her essay, Water, Wine & Marinara, about growing up in Brooklyn, O’Brien describes how generations of women in her family make the kitchen a stage, “where the performers come together as a rambunctious, volatile and loving ensemble.” There is always wonderful food, of course, but in a deeper sense, her aunts’ time in the kitchen is about re-establishing connection, about enacting “the values and beliefs that bind us.” Learning about tenderness, care, inclusion and persistence amidst the cooking and the washing, O’Brien gradually assumes her own place on the stage, discovering what it means to become “a steward of our family narrative.”

O’Brien is poised to take the lead in her family’s production this year, hosting the annual Thanksgiving gathering at the homestead she and her husband are creating in Ringoes, New Jersey. Between her day job mentoring and supporting Princeton undergraduates as they undertake immersive service internships, and her full-time doctoral studies in social work, O’Brien also finds time to maintain a blog, A Hot Mess Homestead, on raising ducks, canning and adjusting from city life to farming.

In her essay Sing!, Anna Braverman, a psychologist in University Health Services, probed the depths underlying a simple Friday evening Shabbat gathering and potluck supper. For some members of her worship community, “this service means stability, inevitability normalcy.” Not for Braverman, who was born in the Soviet Union to parents for whom “the delicate thread” of Jewish tradition had been broken. “As a child,” she writes, “I learned no prayers, attended no services, and the calming, steadfast rhythm of the Jewish calendar was foreign to me.” Yet finding her way to this community in Princeton, writes Braverman, means “that something that my ancestors have succeeded to carry across centuries of untold struggle will not fail with me.” Braverman delights in the knowledge that her children “will grow up with the cadences of the Shema,” and that what was broken in her parents’ generation is being repaired in her own.

Braverman developed a love of writing at a young age, starting with Hebrew in elementary school in Israel, where she moved with her family following the breakup of the Soviet Union. Later, as a teen and young adult in Canada, she explored her literary interests in both Russian and English while studying psychology and neuroscience. Today, she retains a deep connection with Russian, the language of her family — and of her poetry. Buoyed by the experience of the Princeton Writes essay contest, Braverman hopes one day to share this, her most personal work, with a wider audience.

The subject of Jeff Labrecque’s honorable mention essay, The Undeniable Scientific Superiority of Seat F7, offers clues about his professional life before Princeton. A marketing writer in development communications for the Office of University Advancement since 2018, Labrecque spent the previous 15 years as a writer and editor for Entertainment Weekly. The frequent movie screenings that were part of his job allowed Labrecque to perfect his approach to finding the best seat in a movie theater, which has much to do with “screen symmetry,” one’s “line-of-sight” and peripheral vision. Fundamentally, though, it’s about being part of a community. He writes, “Seeing a film in a crowded theater can be an electric experience, with the laughter and shrieks from the strangers in the next row becoming as much a part of your memory as the exploits unfolding on the screen.”

Labrecque enjoys the opportunity he has at Princeton to interview students, faculty and alumni and share their compelling stories — a task he confesses is a bit easier and more pleasant than negotiating with film stars. In his spare time, Labrecque enjoys frequent trips to the movies, which recently included seeing “Avengers: Endgame” with his children on opening weekend, and coaching baseball. A former college pitcher himself, Labrecque is working on a screenplay about Hall-of-Famer Ted Williams.

Gwen McNamara, communications specialist at the Pace Center, earned her second Princeton Writes honorable mention for The Crick. In this lyrical essay, she chronicled her relationship with Alexauken Creek, a stream running behind her grandparents’ farm in the small neighborhood of Mt. Airy in West Amwell, New Jersey, where she grew up. Despite its humble setting, the creek serves, in McNamara’s memory, as a current shaping the course of her life. Recalling skipping stones as a child, family picnics, winter skating amid “the sparkle of icy crystalline swirls,” moments of teenage angst “when I wanted … to listen to your whispers and find comfort in your soothing voice,” and the joy of introducing her own children to its “cool shallows,” McNamara offers a meditation on the themes of constancy and change.

Discovering her passion for writing as a journalism major in college, McNamara developed her craft as a beat reporter for the Princeton Packet and later in communications roles at a local architecture firm and at the Watershed Institute in Pennington. At the Pace Center, where she has served for six years, McNamara describes her work as helping “make the invisible visible,” telling the stories and elevating the voices of students and others engaged in meaningful service on campus and in the wider community.

The Princeton Writes program, established in 2013, offers a welcoming space for all people to cultivate their inner writer. It offers writing seminars, tutorials and other support for students and staff members looking to improve or enhance their writing skills. This year, Princeton Writes sponsored its first symposium, “Connect: Harnessing the Power of Words.” The two-day event, which drew a capacity crowd of staff members from across campus, featured lectures, master classes, panels, a conversation with writer Pico Iyer and a keynote address by Joe Richman, the founder and producer of Radio Diaries.

One of Princeton Writes programs is Writing Space, a supportive and creative community of staff members — writers and would-be writers — who meet monthly between September and June in the Tilghman Classroom (E08) in Dillon Court East. Writing Space gives participants the opportunity, inspiration and motivation they need to set aside time to write. To join the Writing Space listserv, email pwrites@princeton.edu.