The Princeton Writes Staff Essay Contest launched last fall invited staff members to share their perceptions of the University. Forty-one essays were submitted from staff representing a range of departments, and a celebratory reception was held in June. The contest was co-sponsored by Princeton Writes, a program in the Office of Human Resources dedicated to strengthening the practical communication skills at the University, along with the Office of Alumni Affairs and the Council of the Humanities.

A favorite view from a window, a blush of light against stone, the voices of students — all evoke a sense of place that is Princeton University. To describe their own perceptions of this unique place, staff members were invited last fall to submit essays in the inaugural Princeton Writes Staff Essay Contest.

John Weeren, director of Princeton Writes, noted last month at the celebratory reception honoring the participants at Maclean House that 36,677 words were submitted, "the building blocks of 41 essays from 29 academic and administrative units."

Said Weeren, "Above all, those who entered this contest embraced the challenge that every word presents — to be as true as possible to what we see and hear and touch and taste and smell and feel; to capture, in this case, the character of our remarkable university."

The contest was co-sponsored by Princeton Writes, a program in the Office of Human Resources dedicated to strengthening the practical communication skills at the University, along with the Office of Alumni Affairs and the Council of the Humanities. A selection committee of staff members from across the University chose the winning essay, which garnered a $1,000 prize, and three honorable mentions.

Below are excerpts from selected essays. 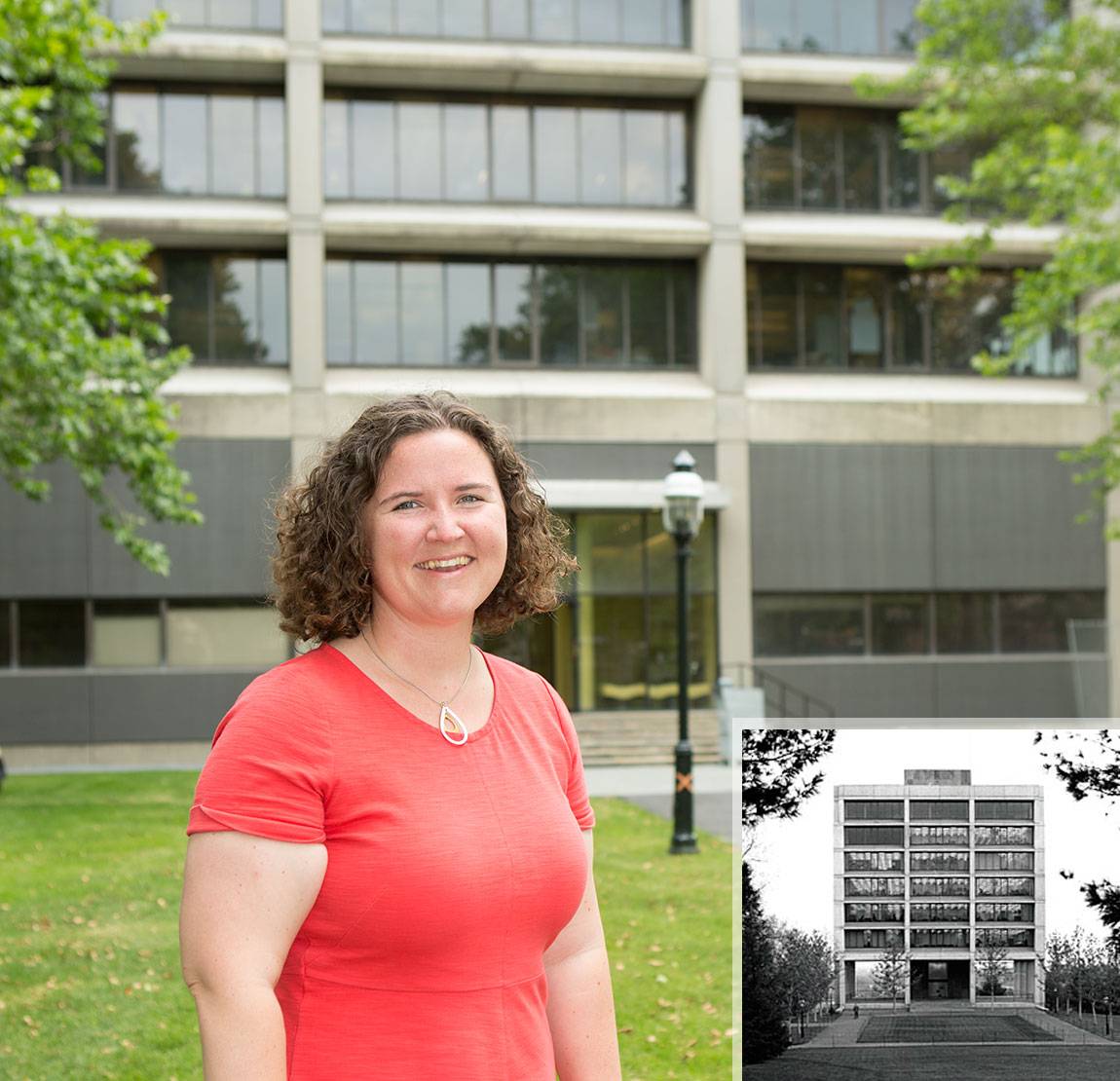 The contest's winning essay, "November Light," was written by Marianna Bogucki, conference and event manager in Conference and Event Services. Bogucki was inspired by the light that plays across the New South building on afternoons in November, and she was fascinated to discover a photo of the building that was taken before the first floor was enclosed in 1982. (Photo of Bogucki by Denise Applewhite, Office of Communications; photo of New South from the Office of Communications)

"It is at this moment, however, as the humans lives leave the building that New South truly comes alive. On those cold November afternoons the fading sun bathes the building in hues of orange and pink as the rest of the campus descends into its period of darkness. Stoic and cold for most of her life, in that split moment she is warm and welcoming. Bursts of natural light streak across her façade, dancing around those darkened windows. Beams radiating from the sky pull her high into the air, levitating above the ground like she was originally meant to. To her knowledge no other building looks as good dressed up in pink as she does, and she glows for those who care to let her. Those who care to wait, those who remember to look up, are rewarded with a sense of peace from this unlikely source. The once ordinary building shows herself to be extraordinary, proving that no one at Princeton can truly ever be ordinary." 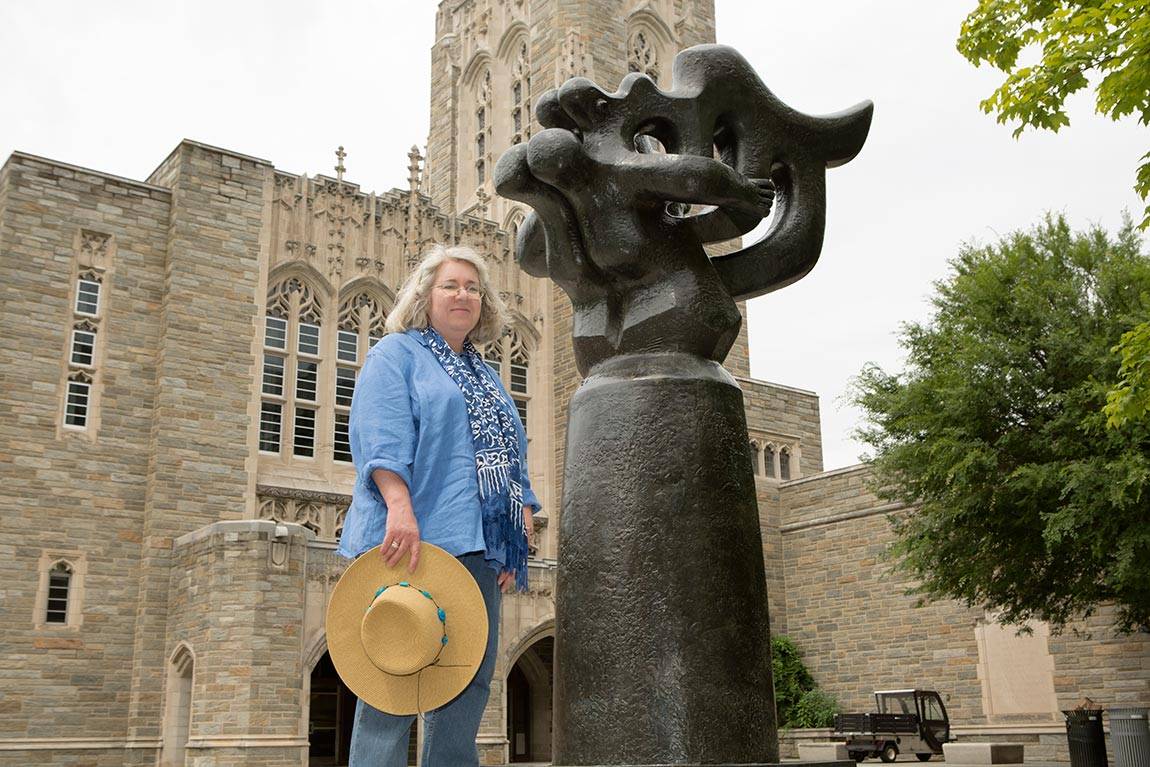 "In the Plaza," by Ruth McGuire, senior bibliographic specialist at the Princeton University Library, describes some of the scenes that captured her attention at Firestone Plaza when she worked in Firestone Library from 2000 to 2012. A focal point of the plaza is the sculpture, "The Song of the Vowels," by Jacques Lipchitz. McGuire received an honorable mention for her essay. (Photo by Denise Applewhite, Office of Communications)

"In the Plaza" — Honorable mention

"It's buff and shine time. Commencement and Reunions loom, and small forts are springing up all over the place. There's a vinegary tang in the air and every plant on campus sits serene and centered in its low volcano of fresh mulch. Some men have cordoned off the low island in the center of the Plaza. They are bathing the sculpture. But they haven't just turned a hose on her. They have ladders and pails, and soft brushes and cloths, and they are so tender in their ministrations, I cannot but be impressed. After all of the storms, the snow, sleet, sun, rain, wind she's been through over the years, she's having a spa day at last."

Read McGuire's essay, "In the Plaza." 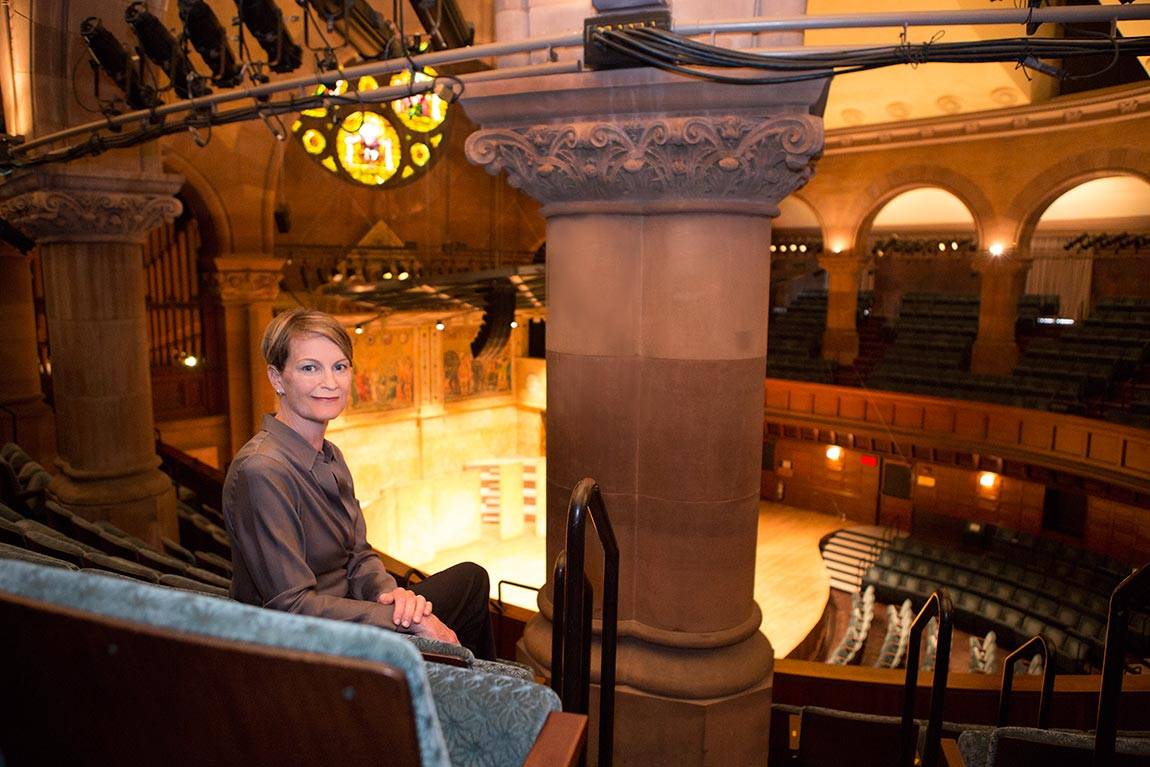 by Jamie Saxon, arts and humanities writer, Office of Communications

"The musicians breathe in together as if one beneficent beast, then exhale, the music cracking open the still air, almost visible, sailing in all directions, buoyed by perfect acoustics, up and around the auditorium. If the music is capricious, it covers your eyes and runs and hides, only to pop back up behind your chair; if tender or dear, it presses its furry, soft coat against you; if haunting, it slips its little hand into yours like a frightened child and you squeeze it warmly; if it's cool and soothing, it wraps itself across your forehead like a dampened fresh towel on a fevered brow; if dark and foreboding, it swoops dangerously close so you feel the air move in front of your face; if its sweetness is almost too much to bear, it sails away in the salty microscopic sea of the tear that slips out of the corner of your eye." 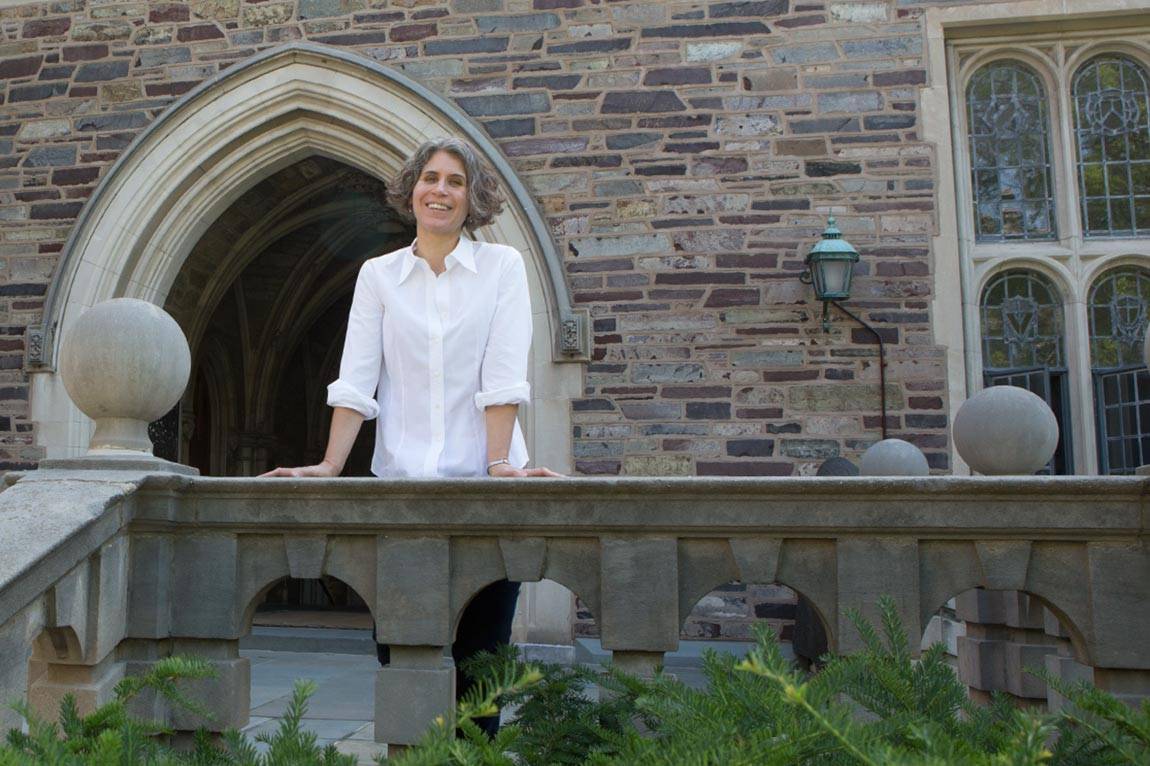 Dana Sheridan, education and outreach coordinator in the Cotsen Children's Library, was inspired to write her essay, "5 a.m.," about her early-morning runs through campus. (Photo by Denise Applewhite, Office of Communications)

"Sometimes — very rarely — I'll hit a stretch where the pain drops away, my breath comes easy, and I forget I'm running. Instead, I am simply there. Pulsing, moving, and part of something both fierce and joyous. Energy thrums and vibrates in my feet, legs, torso, arms, fingertips, brain. My shoes crush pine needles, and I inhale their sharp, wild tang. I keep running. Now the sky is a red, raw line. The peaked roofs and towers are becoming visible against the growing gray light of dawn. I feel the age, time, intelligence, pride and beauty of campus seeping through the stones. I imagine my footsteps adding to those of countless others who have traveled the paths and sidewalks. The pattern of our steps combining to create an intricate design that spans over two and a half centuries."

"Princeton in the Eyes of an Ethiopian"

"I was born and raised in southern Ethiopia in a small town called Jinka which is a home for over 12 different indigenous tribes, a whole list of domestic and wild animals, and an attractive natural environment filled with forests, rivers and farmlands. So you can imagine where my appreciation for natural beauty has come from. The entire Princeton community is a hybrid of this natural beauty and some of the latest and greatest technological developments. For example, the Princeton Plasma Physics Laboratory, which I am proud to say I work for, conducts nuclear fusion experiments in hope for creating a more reliable and carbon-free source of electricity from hydrogen elements which simulates the solar energy that we get from the Sun. In the meantime the laboratory is surrounded by trees which are the habitat for various animals such as deer, squirrels, turkeys and various other species of birds." 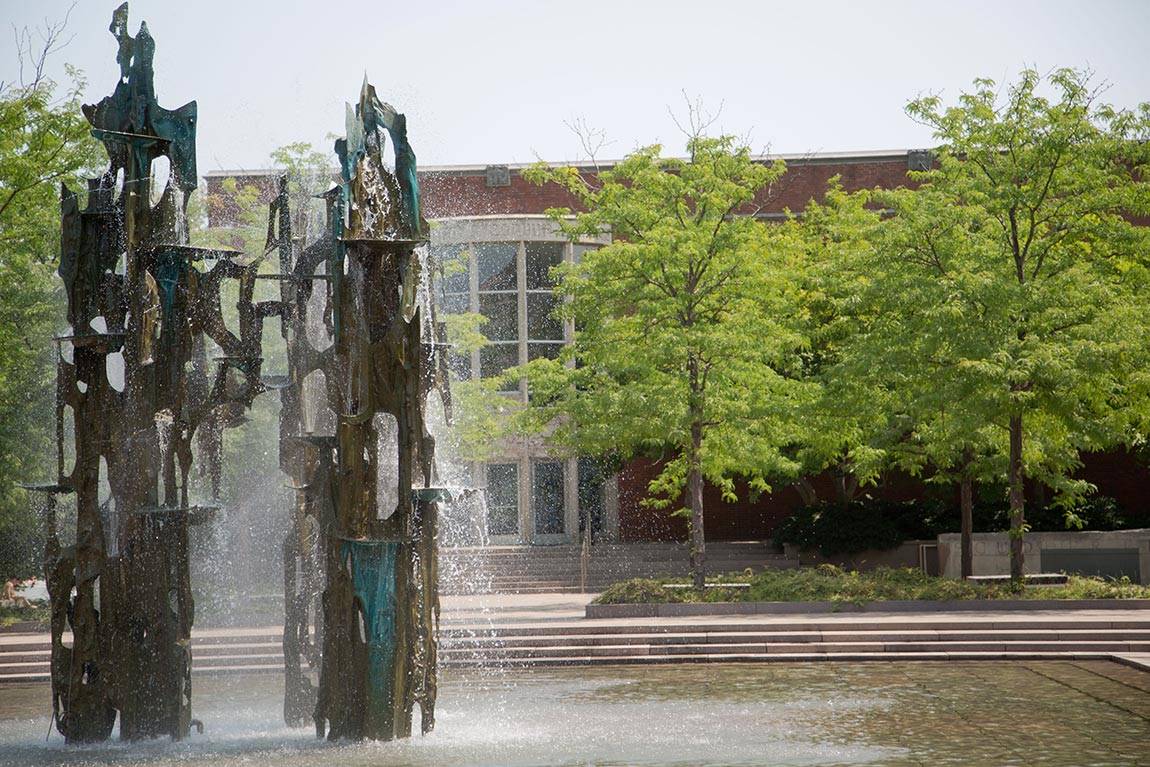 The view from a window within Robertson Hall is of the "Fountain of Freedom" by James Fitzgerald. (Photo by Danielle Alio, Office of Communications)

by Marianne Goldfarb, executive assistant to the dean, Woodrow Wilson School of Public and International Affairs

"Looking out your office window can sound like something you'd do when bored or avoiding the work you have to do. But looking out the fourth floor window of Robertson Hall down on Scudder Plaza and its fountain can be a wonderful source of entertainment, curiosity and beauty. ... I've seen students, of course. Lots and lots of students walking through the water, either en route to their next class or taking a break and dangling their feet into the pool and wishing they could stay for the day. On sunny days, the plaza transforms into Scudder Beach as students lay sunning themselves on the benches or on a towel tossed onto the pavement, resting their heads on bags that become pillows."

Prospect Gardens have a family connection for Amy Such, training and outreach specialist in the Office of Information Technology, whose father, Joe DiMeglio, worked for the Grounds and Maintenance Department, as did her great-grandfather, Evangelisto DiMeglio. (Photo by Denise Applewhite, Office of Communications)

by Amy Such, training and outreach specialist, Office of Information Technology

"Amy and her dad sat down in an open patch of green grass while her dad proceeded to tell her how he had never been more proud or felt more accomplished than he did when he worked on the grounds of Prospect House. 'When I was assigned to the grounds, I never spent a single minute working, but a whole day getting paid to do what I love,' he said. She looked up, mystified. 'You mean you work here?' she asked. Her dad smiled. 'As often as I possibly can.' "

by Bryant Blount, Class of 2008, assistant dean, Office of the Dean of Undergraduate Students

"But look up and you see the arc of everything that connects Princeton — from Nassau Street to Lake Carnegie, from 1746 to 2015. When I walk around campus and really want to feel at home, I look up. ... Lifting my eyes to the line between the buildings and the sky, I find a sense of timelessness in the architecture. ... The clock on the Blair Arch Tower, keeping time since 1897 — and tying us to our forebears and descendants. Showing change, modern shapes emerge, making new directions of thought and construction on areas of campus that used to be open fields as the shadows cast by the louvres of Carl Icahn Lab dapple the lofty atrium's interior: the gleaming glass and polished steel that mark the Frick Chemistry Lab's continued commitment to an ongoing discovery of knowledge; or the panes of the Firestone Trustee Reading Room, which enumerate the men and women named as stewards of the institution since its founding. Looking up, you see in the delicately stained glass and gnarled, creeping ivy, symbols of the best of what we have been and strive to be."

"Thinking back on my first impression of Firestone, I was held in awe as I took in her massive interior structure. How small it looks from the exterior in comparison. From my first day of training at Firestone, I knew this would be a very special place to cherish for the rest of my life. The structure itself is one thing, the amazing contents it holds is another. It's not just a building made up of chiseled stone, mortar, steel, wood, pipes, wiring, mechanical systems, endless stacks of books, miles of manuscripts and art work; it's the people who staff her, faculty, students both undergrad, grad and visiting scholars. They are all what make this precious stone come to life, this firestone of sorts. I marvel at this magnificent library each day I walk through her doors." 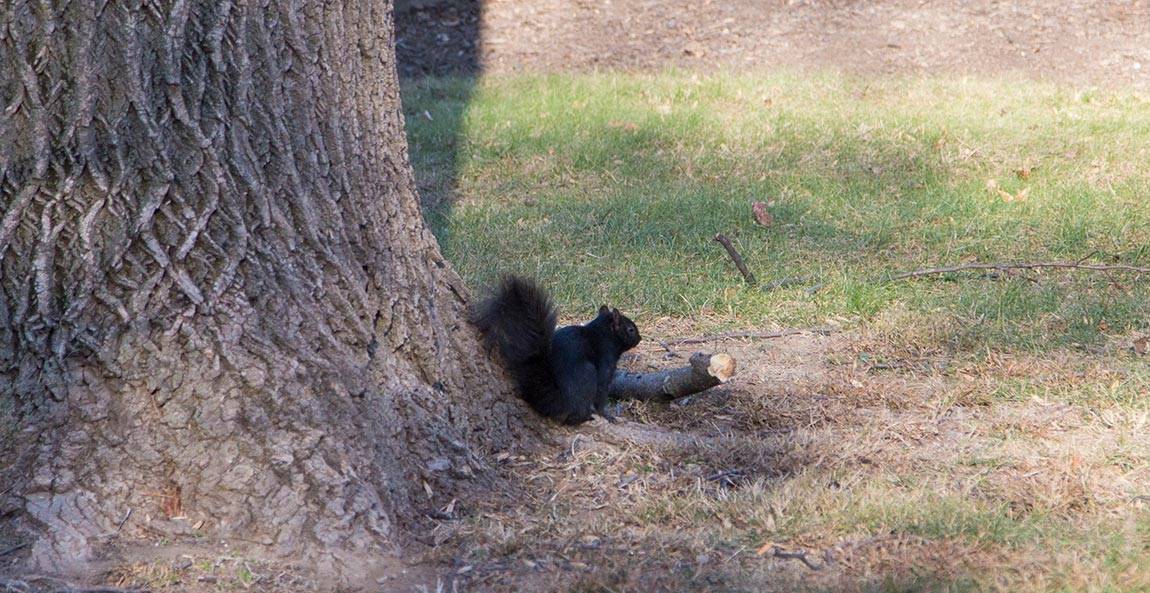 Squirrels are plentiful on the Princeton campus, with antics often amusing, finds Beth Heisler, undergraduate administrator in the Department of Spanish and Portuguese Languages and Cultures. (Photo by Danielle Alio, Office of Communications)

by Beth Heisler, undergraduate administrator, Department of Spanish and Portuguese Languages and Cultures

"The afternoon sun glimmers above Poe and Pardee Fields. Scott and Erica chase each other around the perimeter, hopping up and down in small arcs like horses on a merry-go-round. 'Let's rest here on the grass awhile and soak up some vitamin D,' Scott says. He watches a couple of facilities carts glide across Streicker Bridge in the distance." 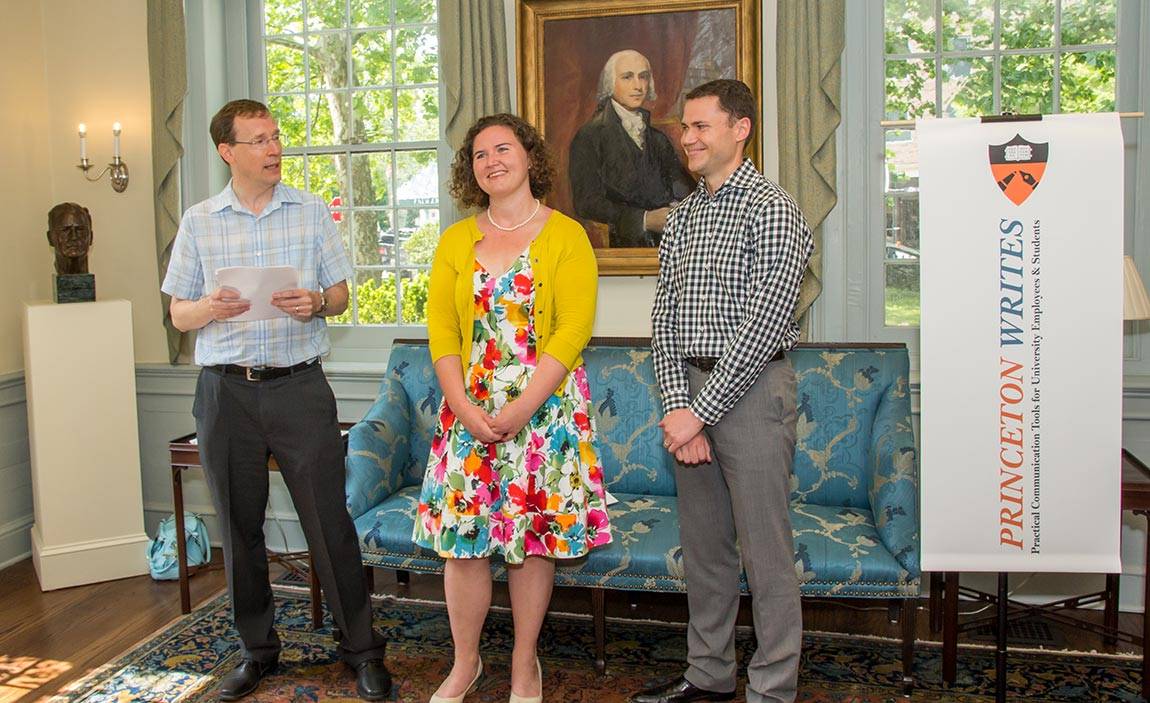 Bogucki is honored at the contest reception on June 10 at Maclean House, with congratulations from John Weeren, director of the Princeton Writes program, left, and Chad Klaus, vice president of University Services. (Photo by David Kelly Crow)