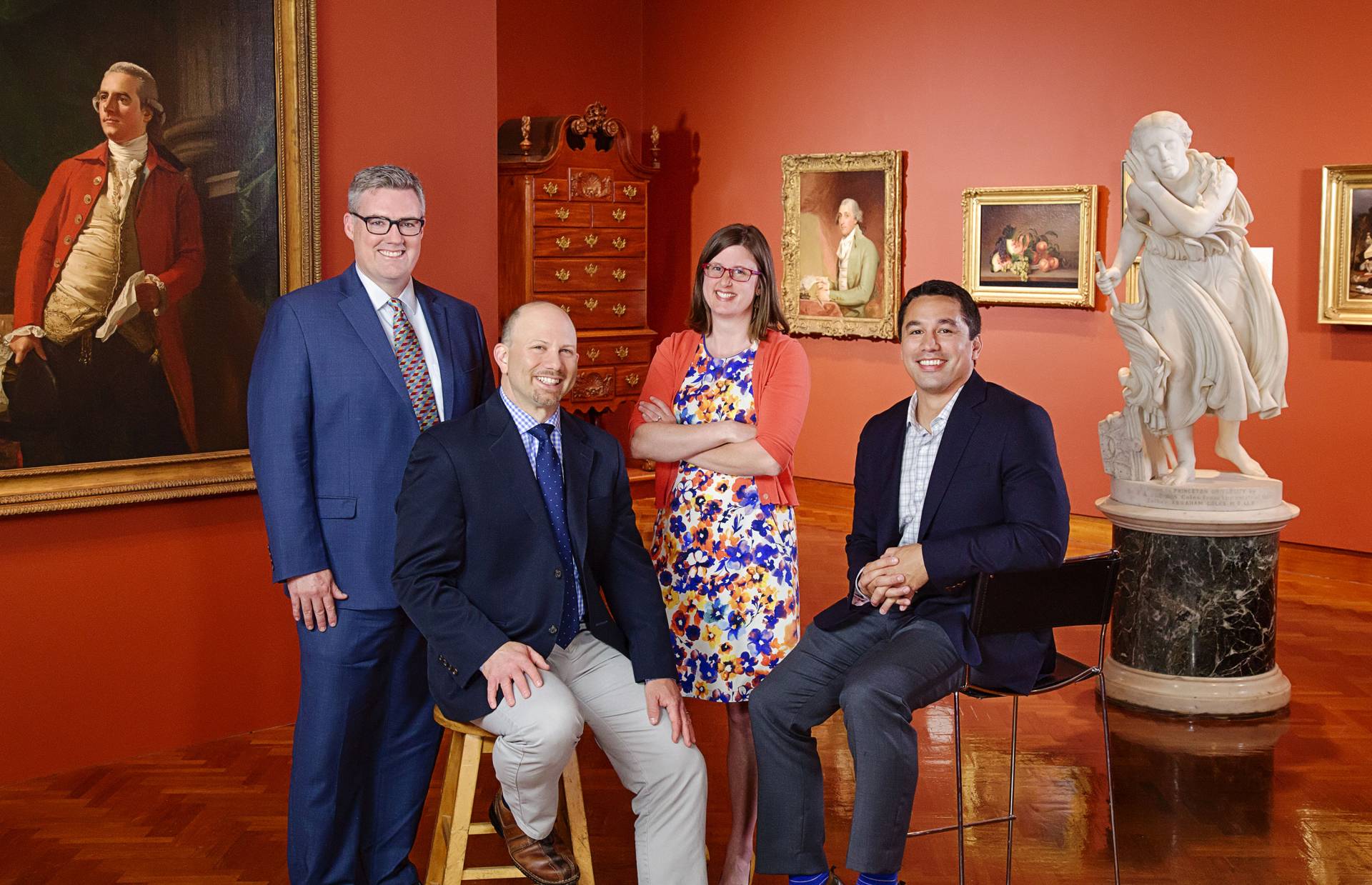 Four Princeton staff members have been honored for their essays in the third annual Princeton Writes essay contest.

The 2016-17 Princeton Writes essay contest invited University staff to share their thoughts on something they believe is overlooked or underappreciated at Princeton.

Out of 40 submissions across 32 academic and administrative units, an essay by Tom Dunne, deputy dean of undergraduate students, took the Princeton Writes Prize. Matt Eaton, Jon Horowitz and Gwen McNamara received honorable mentions. They were feted at a ceremony honoring the writers at Maclean House on June 16.

The four honorees painted a captivating picture of their "special something" at Princeton through a rich blend of original perspectives, unique style and fond memories.

In his essay "Anonymous Monument," Tom Dunne wrote about a depression in the stone step below the door of the West College building, on which he stumbled when he first arrived at the University. What would become a literal touchstone in the years that followed first took him by surprise "because I was nervous with expectation, and I also didn't expect to encounter a defect on a campus radiating such manicured perfection.

"I thought I would do revisions but I actually wrote [the essay] in one sitting and was sort of happy with it," Dunne said. He sent his essay in shortly before the deadline and, over time, forgot about it. When John Weeren, founding director of Princeton Writes, appeared in his office, Dunne first assumed it was to talk about another project. His colleagues, already aware of the purpose of Weeren's visit, joined him. "It was like a mini pop-up surprise party," Dunne said. "It was nice to have them there to celebrate."

On July 1, the West College building will be named in honor of Nobel laureate and emeritus faculty member Toni Morrison.

Matt Eaton, information technology manager in the Office of Admission, recently joined Princeton from Rutgers University. His office in the West College building reveals a beautiful view of Cannon Green, but it was something less obvious that inspired him to enter the essay contest.

He chose to write about the Cotsen Children's Library in his essay "A Guide to Princeton's Wonderland," a decision prompted by numerous visits to this unique corner of Firestone Library with his 2-year-old son. "I imagined we would be bringing him over to the library for years to come, so that’s why I picked this subject," he said.

Eaton, who doesn't usually write in a creative vein, liked how inviting the contest seemed. "There was a line in there that said: 'You don’t have to be a professional writer to compete; amateurs are welcome.'" Eaton noted that "this was kind of new ground for me," recalling his surprise when Weeren came to his office to congratulate him on his honorable mention.

Jon Horowitz, associate director for digital communications in the Office of Alumni Affairs, focused on technology in his essay "Wired." "It's everywhere, but because it's everywhere, I don't think it's appreciated,” he said. "Wired" underscores the omnipresence of technology on campus, as well as the importance of the "warriors" working 24/7 to supply, maintain and improve it.

Horowitz didn't start his essay until two days before it was due. "I like writing on deadline," he said. "Between journalism and days in college, I would always wait till the last minute when papers were due; otherwise, I would just keep rewriting." He likes to write in his free time — short stories, novels, "even just tinkering a lot" — though with a small child and a new baby at home, free time is scarce.

For this reason, Horowitz was drawn to Writing Space, a Princeton Writes-sponsored community of writers and would-be writers who want to hone their skills, share experiences and find inspiration. The group is open to all staff members of the University and meets the second Wednesday of the month, from 4:30-6 p.m., during the academic year in the Princeton Writes offices at Dillon Court East. Meetings feature writing prompts, informal discussion and "field trips" to literary events on campus, such as readings by professional writers, author lectures and open microphone events. The atmosphere is informal, collegial and welcoming. "Writing Space is one of the things that I feel literally created a space to at least think about writing, even if it's just for that hour and a half," Horowitz said.

Between producing social media posts, web-based stories and print materials, Gwen McNamara, communications coordinator of the Pace Center for Civic Engagement, rarely puts down her pen or takes her fingers off the keyboard. She also regularly attends Writing Space. There she was inspired by a prompt inviting participants to select one word in a poem and use it to create something new. McNamara picked the word "crunch." "I liked the idea of thinking about the sound," she said.

This idea became the springboard for her essay "Trail Walk," an exploration of the wooded trail along Washington Road and under Streicker Bridge that she visits as often as she can. "It helps to be quiet and to be with yourself a little bit sometimes, to process and reflect and appreciate, too," she said. Her essay embodies her conception of writing, which she described as a way of "capturing your memories and the moments that you have either with family or friends or your kids" and "not wanting to lose sight of those special stories."

The Princeton Writes program, established in 2013, offers a welcoming space for all people to cultivate their inner writer. Under Weeren's direction, it offers writing seminars, tutorials and other support for students and staff members looking to improve or enhance their writing skills.