Four Princeton staff members have been honored for their essays on diversity in the second annual Princeton Writes essay contest.

Out of 20 submissions across 18 academic and administrative units, an essay by Bryant Blount, an assistant dean in the Office of the Dean of Undergraduate Students, took the top prize. April Armstrong, Violette Chamoun, and Brian Mondschein received honorable mentions.

At a ceremony honoring the writers at Maclean House on June 16, Princeton Writes founding director John Weeren praised contestants for embracing diversity — a topic he described as "so idiosyncratic and so transcendent, so central to an understanding of oneself and others that some fear to unpackage it." But, he said, "those of you who entered this year's contest welcomed us into your lives and, in the process, broadened and deepened our definition of what it means to be human." 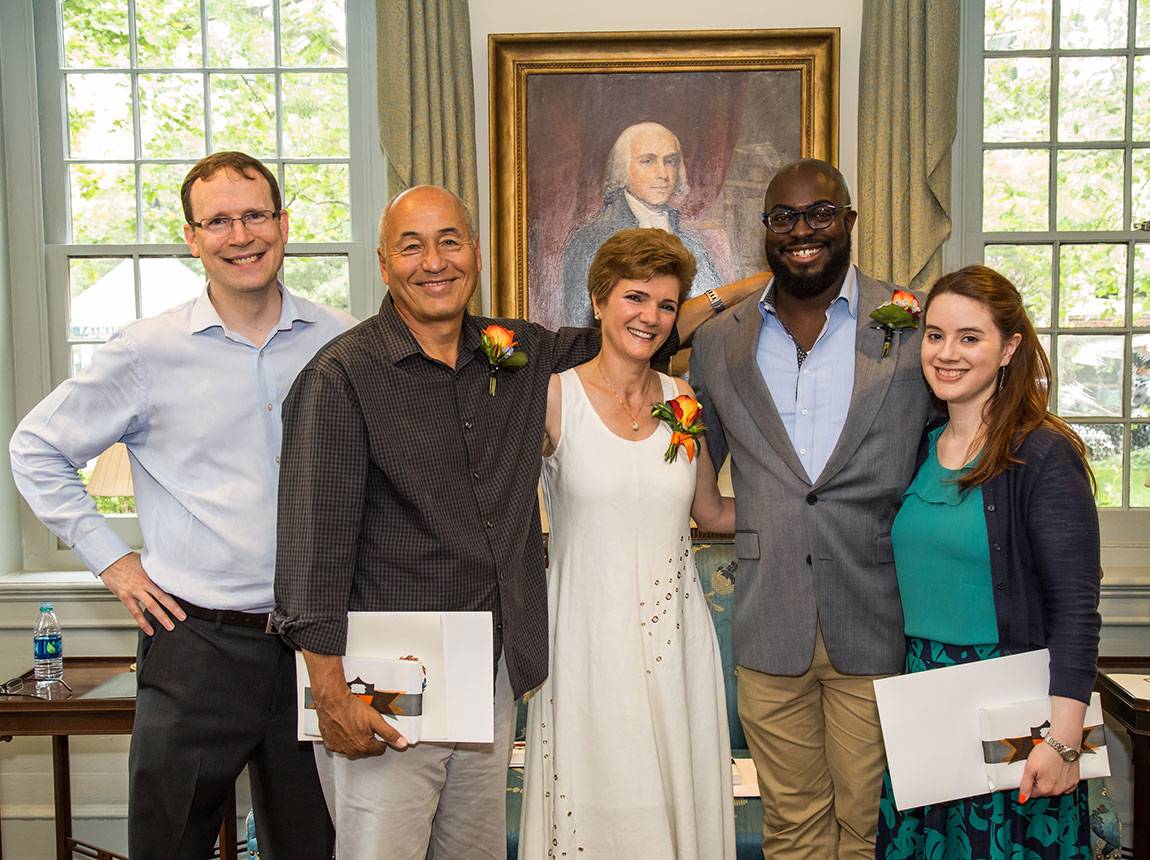 The authors honored at the reception have unique backgrounds, bringing stories of their origins, travels and interactions across the globe to a campus that has grown in many ways since its 18th century beginnings in colonial New Jersey.

Blount, an alumnus of the Class of 2008, set his untitled essay in Japan. Blount believes experiences of diversity can be quite personal, and the trip was one of his formative memories.

"That summer really stands out to me as the first time I'd left the country," Blount said. "For me, part of what ties it to Princeton is it happened while I was student. It impacted me at a time when a lot of things were changing."

While the trip was overall a positive experience, he described feeling frazzled on the day he documents in his essay. It was a struggle to communicate, and he was surprised by an interaction with a small child on the train. Blount writes about how when the boy offered him a candy, he politely declined in Japanese. Many people have asked Blount why didn't he take the candy as a courteous gesture. "It was kind of awkward," he said. "It was a big travel day. There's a lot coming at you. You can't go back, only go forward."

However, he considers reaching out in another language a positive part of the encounter. "The best thing I did was speaking in Japanese, and he didn't expect that."

Chamoun, a Campus Dining operations manager at Forbes College, wrote about her experience as an immigrant from Lebanon in her essay, "A Taste for Diversity," exploring how food encompasses identity. When she saw the prompt, she knew she had something to say about diversity. "Something inside me jumped and said, ‘This is me,'" she recalled.

Chamoun said she writes often, both in Arabic, which she considers her own language, and English, which she had to learn when she moved to the United States. As she composed her essay, she considered how to keep the reader engaged by basing her writing on her personal experience.

Chamoun saw the contest as an excellent opportunity to share her stories, which she had kept to herself for a long time. "After 28 years, I was able to tell people what I had to go through," she said. She has found the responses from colleagues to be both positive and incredulous. "Now people know me better from reading the essay," she said. Several people, amazed by her stories, have asked her, "Did you really go through all this?"

Although April Armstrong, a special collections assistant at the Seeley G. Mudd Manuscript Library, did not have to cross international borders to come to Princeton, she relates how her home state of Oklahoma can feel like a whole world away in her essay, "Divided by an Invisible Distance." She describes the challenge of using her U.S. Bureau of Indian Affairs-issued Certificate of Degree of Indian Blood or Choctaw Nation of Oklahoma citizenship card as her legal ID.

Armstrong wanted to contribute to the discussion of race, which she regards as often unduly focused on appearance. "Not everything about someone is visible," she said. She also believes the conversation on diversity should extend beyond ethnicity: "There are a lot of things in my identity not necessarily racially related."

Her work at the library gives her a special view of how Princeton's dynamics have changed. Although the University has made efforts in its later years to admit more diverse classes, the archives record the story of less inclusive times.

While Armstrong considers Princeton to be her home now, she stays connected to her Choctaw origins. "Princeton can't get rid of the history of itself, and I can't either," she said. "I want to have a connection."

Armstrong writes regularly for the library blog and welcomed the opportunity to write an essay that incorporated words from the Choctaw language. "It's good for people to experience the language," she said, pointing out that many people do not know that the word Oklahoma is derived from a Choctaw term meaning "red people."

While Brian Mondschein, who coaches women's track and field, is not from an exotic location, his complex identity was strong fuel for his essay, "Returning to Levittown." The son of a Hawaiian-born Japanese graduate student and a Brooklyn-born Jew and American veteran, Mondschein confused his less-than-friendly childhood paperboy in New York, who did not even know the "correct" derogatory ethnic slur to use. While he faced discrimination as a child, his position as captain of the football team in high school changed how others perceived him, and he took on "athlete" as his full identity.

Mondschein attended graduate school for writing before fully committing to a career in athletics, but he does not consider himself a writer. Although he found entering the contest to be fun, writing regularly is a challenge. "Writing, which we think of as so rewarding and exciting, is the kind of hard work that you don't necessarily go into first," he said. "You have your house to clean or errands to run. You never get done with all that stuff." Mondschein found that the prompt of a topic and the incentive of potentially winning a contest to be very motivational to sit down and write.

The Princeton Writes program, established in 2013, offers a welcoming space for all people to cultivate their inner writer. Under Weeren's direction, it offers writing seminars, tutorials and other support for students and staff members looking to improve or enhance their writing skills.