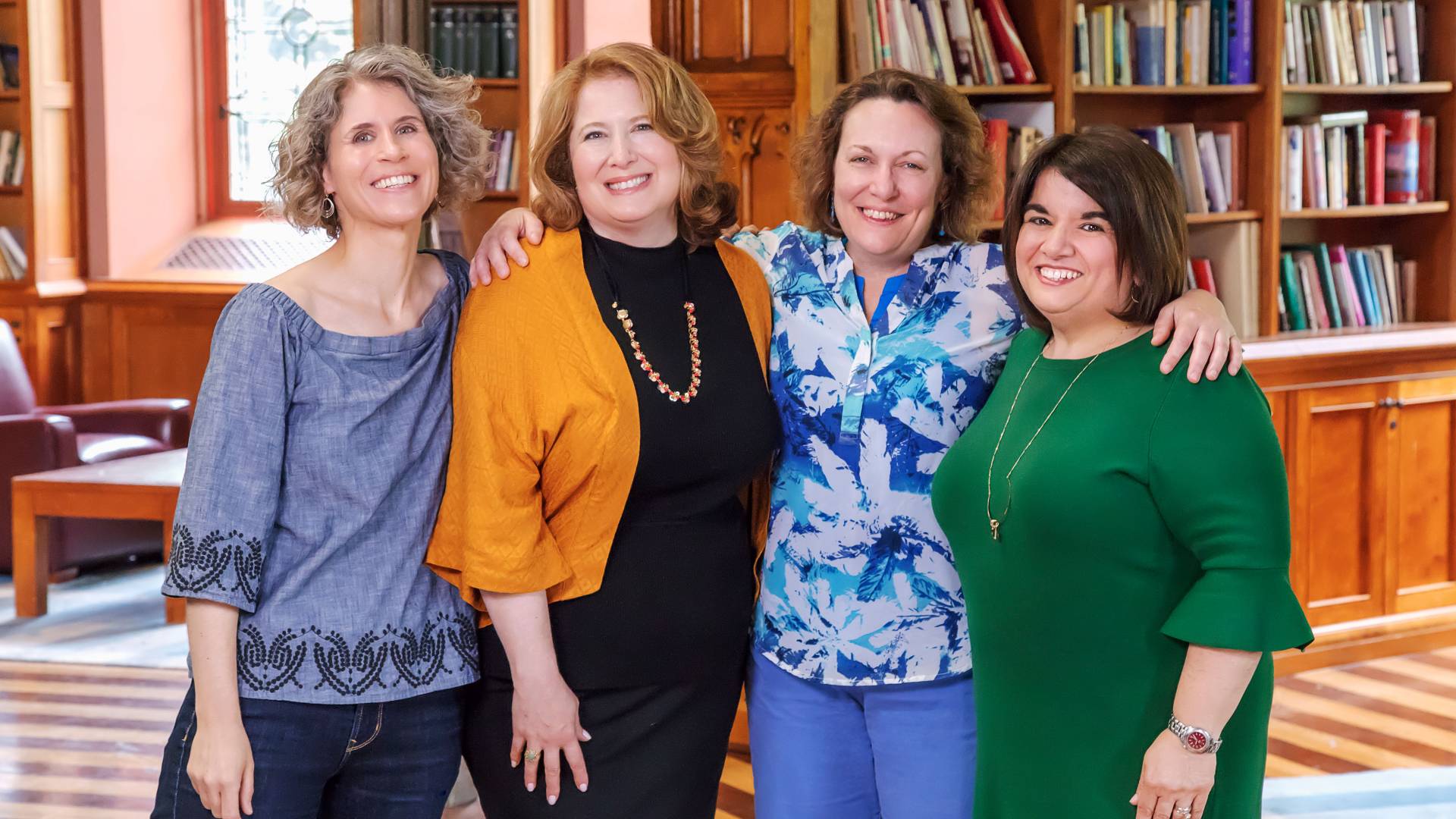 Four Princeton staff members have been honored for their essays in the fourth annual Princeton Writes Prize staff essay contest.

The 2017-18 contest invited University staff to describe an encounter or relationship that gave them a new perspective. Out of a record 58 submissions from staff members across 38 academic and administrative units, an essay by Dana Sheridan, education and outreach coordinator for the Cotsen Children’s Library in the Princeton University Library’s Division of Rare Books and Special Collections, took the Princeton Writes Prize. Melissa Moss, Dianne Spatafore and Carla Zimowsk received honorable mentions.

During a ceremony at Maclean House on June 6, Princeton Writes Program Director John Weeren thanked contest participants “for the generous and courageous impulse that prompted you to share your stories.” Reflecting on the many ways that the essays “captured our common humanity,” Weeren said the honorees “revealed what we sometimes overlook in our daily grind; that we share not just a workplace but also life itself, in all its joy and grief.”

The honorees were inspired by the contest to reflect on a profound personal experience and in the process to discover, or rediscover, a love of writing.

In her essay “She Still Hasn’t Told Me Her Name,” Sheridan describes her unusual relationship — with a dining room table. During a difficult time in her life, she discovered that the process of seeking and finding the right table, one that was inexpensive, sturdy and most importantly, round, created the anchor her family needed to persevere. After a long search, she found just the right piece: “Suddenly, here was an enchanted table with a history, personality, voice. A friend, arriving during the ugliest, greyest, most grindingly adult period of my entire life … made me believe again.”

Sheridan is a mother who squeezes writing time into the small spaces between family life and her work designing youth programs and events, as well as maintaining a blog, at the Cotsen Children’s Library. She credits the Princeton Writes contest with helping reawaken creative talents long hidden behind the demands of academic and professional writing. Her newest project? A children’s novel about secrets.

Honorable mention winner Melissa Moss, who last year joined the Office of Communications as communications strategist for the sciences, describes in her essay “Two Autumns” how her encounter with a place — Princeton University — helped preserve a precious moment in the life of her family. Moss’ essay weaves together the simultaneous experiences of joy and loss during Parents Weekend two years ago, as her son Noah Beattie-Moss, a member of the Class of 2019, began his first year at the University and her spouse, Anne, faced a terminal illness.

Attending Princeton was the fulfillment of a dream for Noah, and being able to share the experience with his parents was part of that dream. Moss recalls with gratitude the kindness and thoughtfulness of University staff who helped make Anne’s visit possible. Moss said this year’s contest offered her the opportunity to return to that moment and “tell a story that I have wanted to capture in words for some time now.” Bringing her poet’s sensibility to the task — she has an MFA in creative writing — Moss said writing this piece “felt like coming full circle.”

Dianne Spatafore, director of Campus Club, Office of the Dean of Undergraduate Students, said writing is a kind of refuge and though most colleagues know her as a bit of a comedienne and storyteller, she has another, more private side as the mother of a child with special needs. When her son, now 5 years old, was born three months premature, Spatafore began a blog about the experience for family and friends. Writing allows her to reflect on experiences that aren’t easy to share “over the water cooler,” she said, and enables her to “explain things more eloquently” and “get creative about celebrating milestones,” significant moments in her son’s life that others might overlook.

Spatafore’s encounter with another mother during one of her son’s hospital stays became the basis for her untitled essay, a reflection on the mysteries of suffering and human resiliency. She hopes that by sharing her story she will create new opportunities for connection among families with children with special needs in the greater Princeton community and beyond.

Arkadaş, the title of Carla Zimowsk’s essay, means “friend” in Turkish. As technology support analyst/manager for the history department, Zimowsk had the opportunity several years ago to work with John Haldon, the Shelby Cullom Davis '30 Professor of European History and professor of history and Hellenic Studies, on database needs for an archaeological survey he was conducting in northern Turkey. During the third year of the project, Zimowsk was invited to spend some time on site to observe the work in progress.

An avid observer with a “secret love of writing,” Zimowsk kept a blog during her trip, recording details of the project but also describing her encounters with people and places in the village where the project team stayed. One of these people was Ikbal, “a feisty little woman known to arm wrestle across the lunch table or smack a volleyball around the playground when she wasn’t busy cleaning or prepping meals for her village school.” Though neither spoke the other’s language, they found a way to communicate beyond this barrier and to find surprising commonalities.

The Princeton Writes program, established in 2013, offers a welcoming space for all people to cultivate their inner writer. Under Weeren’s direction, it offers writing seminars, tutorials and other support for students and staff members looking to improve or enhance their writing skills. One of the programs offered is Writing Space, a supportive and creative community of staff members — writers and would-be writers — who meet monthly between September and June in the Tilghman Classroom (E08) in Dillon Court East. Writing Space gives participants the opportunity, inspiration and motivation they need to set aside time to write. To join the Writing Space listserv, email pwrites@princeton.edu.