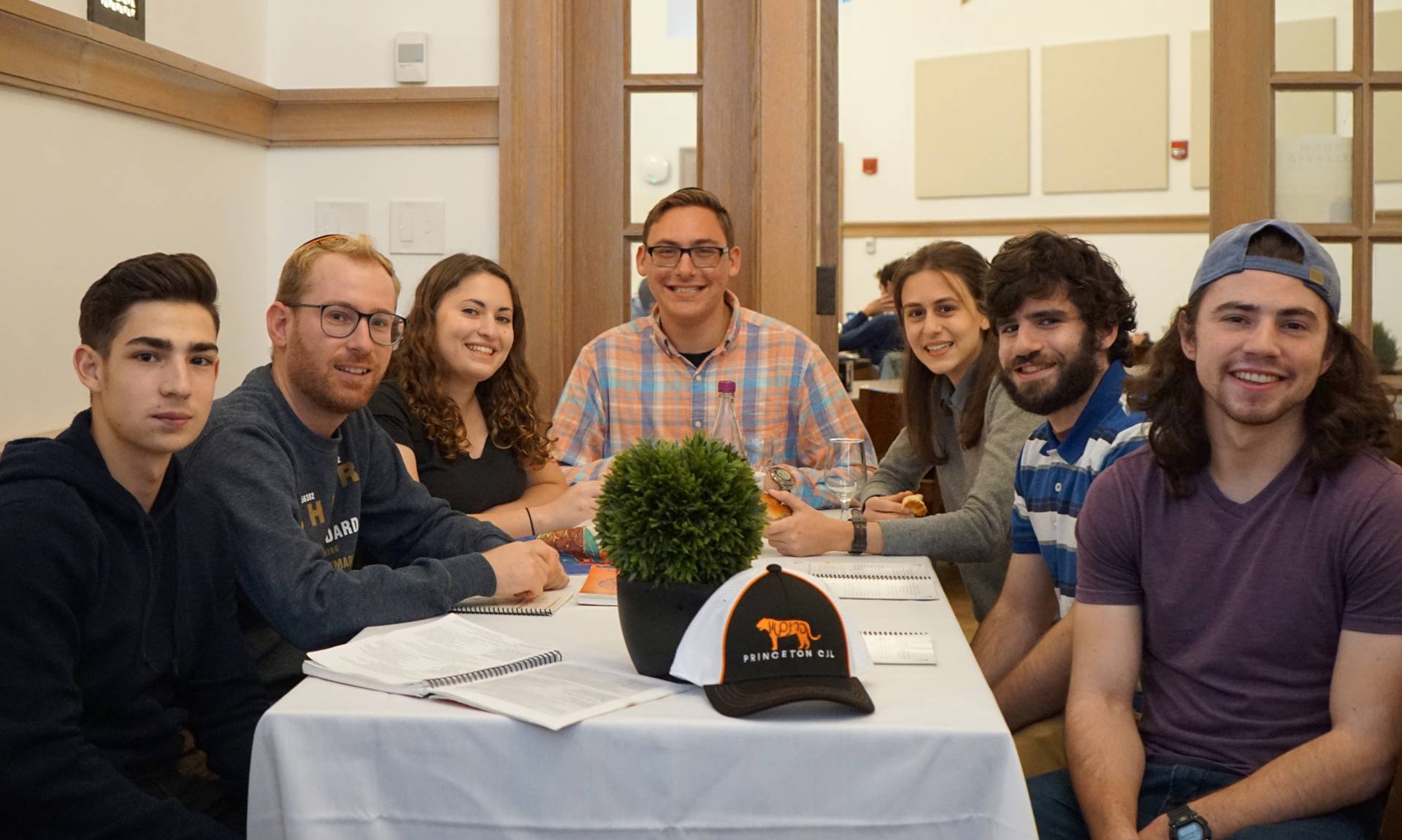 Students gather before Shabbat dinner at Princeton’s Center for Jewish Life. Princeton has had a University-sponsored kosher kitchen on campus for more than 50 years, and today the kosher dining hall is a popular spot for Jewish and non-Jewish students to eat daily meals and celebrate special events.

Photo courtesy of the Center for Jewish Life

For more than 50 years, Princeton’s kosher dining hall has served as a community-gathering space where Jewish and non-Jewish students are welcome for daily meals, holidays and celebrations.

Archival images courtesy of the Center for Jewish Life

Princeton was one of a few schools in the country to open a University-sponsored kosher kitchen on campus in 1971, then located in the former student social club Stevenson Hall. When the Center for Jewish Life (CJL) opened in 1993, kosher dining and Hillel social and religious programs came together in one building for the first time.

Today, the CJL dining hall is a popular campus spot, given its homey atmosphere, its proximity to humanities, social sciences and engineering buildings, and its “famous” chocolate chip cookies. The kosher kitchen exemplifies the many dining and dietary options available to Princeton students, including halal, vegan and allergen-free foods.

“Thanks in part to its central location on Washington Road, its leadership and its active campus partnerships, the Center for Jewish Life is an integral hub in the lives of Princeton students from all backgrounds,” said W. Rochelle Calhoun, vice president for campus life. Dining is among the social, educational, religious and spiritual services provided by the CJL.

The kosher dining hall is supervised by the Orthodox Union and is part of Campus Dining, meaning that anyone with a Princeton meal plan can eat there. It serves 20 meals per week during the academic year -- breakfast, lunch and dinner — to hundreds of students. The dining room is often packed at lunch and also hosts special themed meals, like Superhero Shabbat where students and staff dress as their favorite Marvel or Avenger character.

“The kosher dining hall every day attracts Jewish and non-Jewish students for meals and ensures that students who keep kosher have a home at the heart of campus,” said Rabbi Julie Roth, who has served as executive director of the CJL and Princeton's Jewish chaplain for more than 17 years. Roth has announced she will step down June 30 and Rabbi Gil Steinlauf, Class of 1991, has been named as the next executive director.

“Everyone comes together to take a break from the busy week, sing the blessings as a community, line up for matzah ball soup, and thank the incredible kitchen workers,” Roth said. “That energy was handed down to our students from the previous generations who made Stevenson Hall so special.”

Soon, the CJL’s main kitchen and dining facilities will be renovated and expanded thanks to a gift from Class of 1957 graduate David Mandelbaum and his wife, Karen Mandelbaum, as part of the University’s Venture Forward campaign. The Mandelbaum Family Dining Pavilion will allow CJL to better serve a student population that has increased significantly since the center opened nearly 30 years ago.

“We are so proud that the Mandelbaum name is forever linked to the center, in a new facility that will both nourish Princeton’s Jewish community and be a gathering place for the entire student body,” Roth said.

While not all Jewish students keep kosher, those who do find it essential to have kosher dining on campus.

“The Center for Jewish Life and the dining hall were big factors in why I picked Princeton,” Class of 2020 graduate Oriel Farajun said during his recent visit to campus for Reunions. “The food is incredible and the cooks and staff are wonderful — when I came back, I went straight to the kitchen to give them all big hugs.”

In addition to the CJL dining hall, students have the option to have a kosher meal transported to their residential college dining hall. Chabad at Princeton, founded in 2002, also hosts holiday and Shabbat meals at its building on Edwards Place.

The establishment of Princeton’s first kosher dining hall in 1971 exemplified the growth of and increased support for Jewish students on campus. Before then, students kept kosher food in their rooms or ate off campus.

“I was a member of Stevenson Hall during my entire time at Princeton, from 1981 to 1985,” Class of 1985 graduate Joshua Rawson recalled. “The fact that Princeton had opened a University-owned kosher dining facility, integrated within the overall dining system spoke volumes to me about the University’s commitment to kosher and traditional Jewish students.”

Rawson said he appreciated that the former Stevenson Hall was a place where all students could gather.

“We were part of the overall dining and social system,” Rawson said. “Princeton was a leader in this respect, and in the years since many other universities have followed this approach and similarly integrated their kosher dining facilities into the overall dining system. For me, one of the most important legacies of Stevenson is the respect, creativity and courage that Princeton leadership showed in finding a way to meet the particular needs of kosher Jewish students in ways that uplifted and enhanced and sought to not marginalize.”

Decades later, Jewish and non-Jewish students continue to come together for meals and community-building on Princeton’s campus.