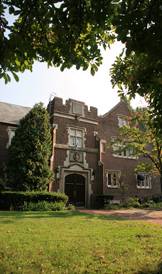 Campus Club, located on the corner of Washington Road and Prospect Avenue, will be renovated and used for student gatherings.

Plans are under way to turn Campus Club, a former eating club that has been donated to the University, into a gathering space for Princeton undergraduate and graduate students.

The University intends to renovate the building for use as a place where students can gather informally between classes as well as a place that they can reserve for dinners, receptions, musical and other cultural events, social events, meetings, precepts and more.

"We're very excited about the opportunity that Campus Club will give us to provide additional social gathering options for students," said Amy Campbell, special assistant to Vice President for Campus Life Janet Dickerson.

Campus Club, which was founded in 1900, closed in 2005 after experiencing financial difficulties. Its membership voted last November to donate the building, located on the southeast corner of Washington Road and Prospect Avenue, to the University. The University assumed ownership of the building on Aug. 1.

"Although we are deeply saddened by the closure of the Princeton Campus Club that played such a large part of our undergraduate lives, we are excited by the opportunity to preserve and, to the extent possible, enhance the role that Campus Club will play for Princeton undergraduates, alumni members of the club and University alumni in general going forward," said Anne Trevisan, a 1986 alumna who chairs the club's graduate board.

"Our donation of the club to the University ensures that the historic club building itself will continue to be cherished," she added. "Perhaps more importantly, the use of the building that has been outlined in the donation agreement means that Campus Club will have a dynamic and ongoing role at the center of the University campus, and will continue to enrich the lives of students and alumni for many more years to come."

Club members and other alumni will continue to have access to the facility on certain occasions, such as after home football games and during Reunions and Alumni Day weekends. The University has agreed to preserve the appearance and character of the building, particularly the exterior and the principal public spaces within the building. An advisory committee of three Campus Club representatives and two University representatives will be established and consulted on the uses of the facility and renovations.

Work is expected to begin this academic year on the three-story Collegiate Gothic style building, which was designed in 1909 by architect Raleigh Gildersleeve, who also designed McCosh Hall and several other eating clubs. Renovations will include a general sprucing up and refurbishing, as well as accessibility improvements, including the installation of an elevator. Flexible furnishings will be provided so that the rooms can accommodate a variety of uses, and the facility will retain a catering kitchen. Plans call for the building to re-open to students in spring 2008.

In the meantime, University officials are moving ahead with programmatic plans for the facility. Dickerson's office has been engaged with students in a broad effort aimed at enhancing the nonacademic life of Princeton students.

One type identified is a social venue open to all students. "The eating clubs have dances and social gatherings, but a lot of times they are only open to club members," Campbell said. "Campus Club will be open to the entire student community, so that students who are members of clubs as well as students who are not members of clubs will be welcome to use the space or reserve it for a meeting, precept or event.

"We also have very few spaces on campus where students can host a dinner," she continued. "Current options include renting space at a club or using the Carl Fields Center, but they are often booked with other events and can be expensive. Campus Club will provide an additional place where student groups can meet and enjoy a special dinner."

Campbell said that students also identified the need for an informal place to "just hang between classes, to watch TV, play video games, or just a place to relax. While the Frist Campus Center has those kinds of spaces," she said, "it's very much a public thoroughfare. Students are looking for the cozy living room of home, where they can just toss their books down, flop on a chair, read a book."

Alex Lenahan, a Princeton senior and president of the Undergraduate Student Government, has been involved in the planning for Campus Club. "The goal of the space will really be to give students -- whether they're independent, in a club, in a college or anything else -- a place to interact in a very comfortable social setting, and complement the functions that Frist already serves. We pictured students using the club as a place to hang out both during the day and the night, and at night especially have the club provide a different sort of social option for students that should help make all students' social lives richer."

Administrators will be working with students to set up a management structure that will determine Campus Club's hours and the process for reserving rooms. Campbell said, "We expect a student board will include representatives of different classes and student constituencies." She said there most likely will not be a rental fee for students, but there would be charges for catering and other such services.