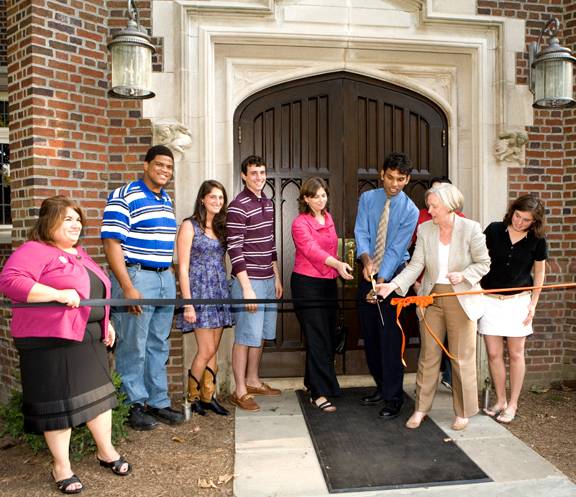 Campus Club re-opens this week — after 18 months of renovations — as a gathering place for undergraduate and graduate students.

The former eating club building, which was donated to the University in 2006, now will be a space for dinners, dances, receptions and evenings of music, as well as lectures, meetings and forums — all organized by students.

A ribbon-cutting ceremony will be held on the club's front lawn at 4:30 p.m. Friday, Sept. 18. Following the ceremony, there will be a reception and guided tours of the building. Other celebratory events will be held Friday night and over the weekend. 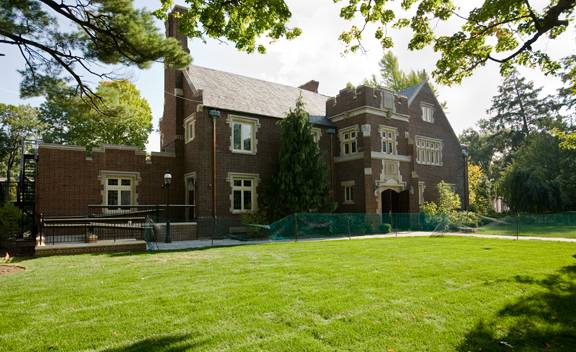 Campus Club, a former eating club building, now will be a space for events organized by students and a place for them just to hang out. (Photo: Brian Wilson)

Junior Cindy Kroll, who is on the student advisory board, is excited about the facility's unveiling.

"I hope that everyone will see the club as a cozy place where they can relax and make the most of the many opportunities this gorgeous space provides," she said. "The club will create opportunities for undergraduate and graduate students to chat and share ideas outside of the classroom setting."

A board made up of undergraduate and graduate students will set policies for the day-to-day operation of the club, engage in outreach efforts, and create and sponsor events at the club. Student organizations will be able to sign up to hold events at the club at no charge, other than event-related costs such as food.

The three-story Collegiate Gothic building, which was completed in 1910, was designed by architect Raleigh Gildersleeve, who also was responsible for McCosh Hall and several other eating clubs. Campus Club, which was founded in 1900, closed in 2005 after experiencing financial difficulties. Club members and other alumni will continue to have access to the building on certain occasions, such as after home football games and during Reunions and Alumni Day weekends. An advisory committee of three Campus Club representatives and two University representatives has been consulted on the renovations and the uses of the facility.

General repairs were made to the building during the renovation, including replacing damaged woodwork and upgrading the sprinkler system, plumbing and lighting. An elevator was added, and accessible entries were installed on the lower level and first floor.

In the basement, the club's original tap room has been restored. The wood bar, with carvings made by generations of students, has been sealed so it will be preserved, but it will no longer function as a bar. There also is a lounge with a large-screen TV and a gaming area, and a den with seating for 40 that can accommodate small lectures or movie screenings.

The first floor includes a catering kitchen, a dining room, a sun room, a living room and a meeting room, which the club called "the Prospect Room." The second floor has a library and billiards room.

The rooms in Campus Club, such as this basement lounge with a large-screen TV, have been supplied with movable furniture so it can serve many functions. (Photo: Brian Wilson)

Wireless Internet access will be available throughout the building and the yard, which also can be used for events. Much of the furniture inside the building will be movable, so it can serve many functions.

As part of sustainability efforts, a new geothermal system for heating and cooling has been added, along with 12 geothermal wells in the backyard on the south side of the building.

"I think that Campus Club is a much-needed addition to our campus," said senior Eric Plummer, who is on the club's advisory board. "It will give students another place that they can hang out in."

A biweekly coffeehouse series, in which a musician plays on a Thursday or Saturday night at the club, is being planned for the fall semester.

Events for students are scheduled throughout the weekend to celebrate the club's opening. For more information, visit the Campus Club blog.