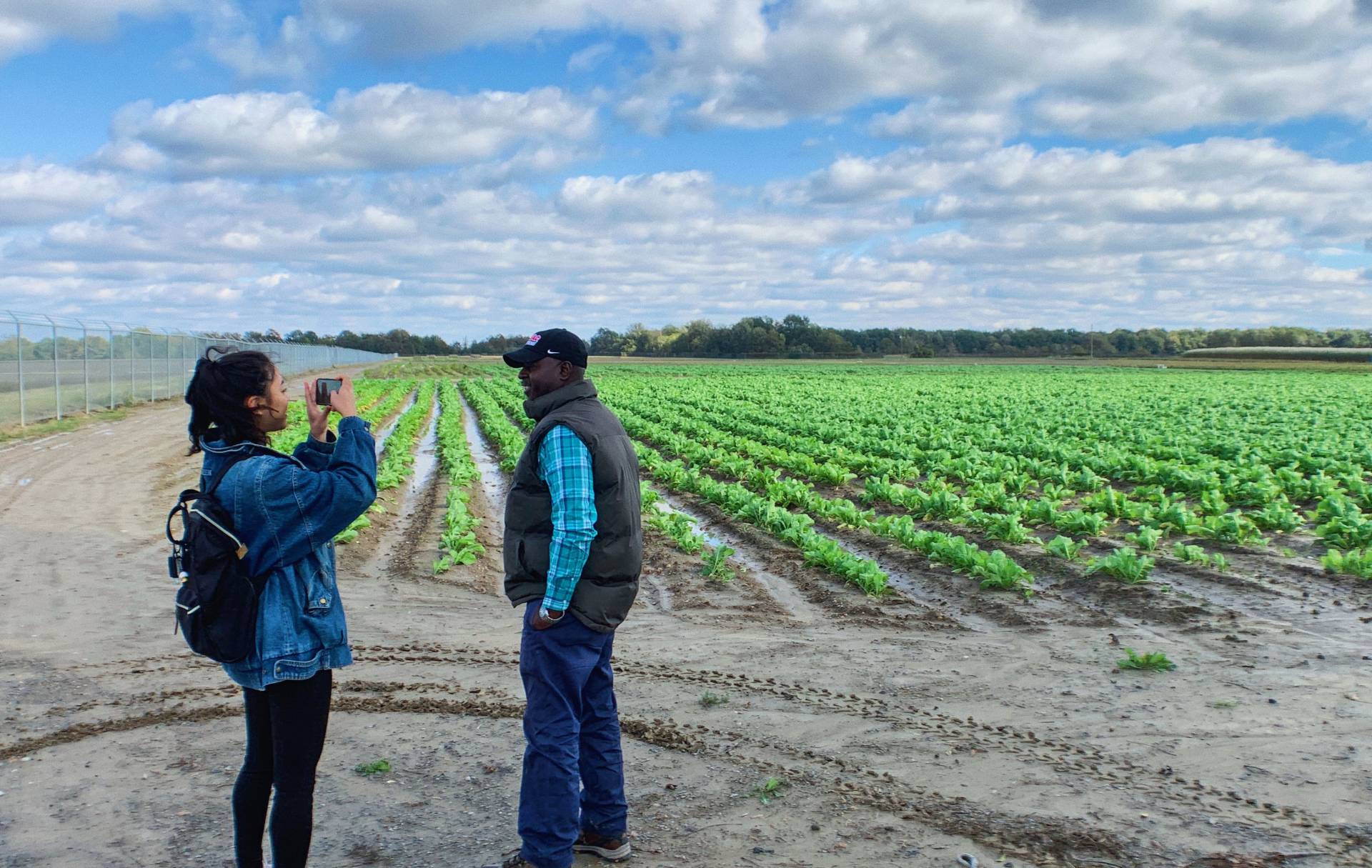 Princeton students in the fall course “Audio Journalism” traveled to Mound Bayou, Mississippi, to produce an audio documentary series. Fumika Mizuno, Class of 2021 and a history concentrator, said: "I reported on the farmers of Mound Bayou. John Coleman was the first person I interviewed. He manages a demonstration farm just outside the town. Here, he shows me a field of mustard greens. Throughout my week in Mississippi, I was continually struck by the deep commitment of the town's residents to preserving the vitality of Mound Bayou, whether that is through agriculture or education."

Photo by Bryant Blount, Class of 2008, Office of the Dean for Undergraduate Students

“In 1887, a group of former slaves ventured into Mississippi swampland, beating back lizards, mosquitoes and wild animals. They cleared walls of brush and trees, forming what would become the first all-black town in America…”

Imagine these words spoken over a bluesy rendition of the song “Mound Bayou” recorded by black jazz vocalist Maxine Sullivan. The words and the music stir together, thick and slow as molasses, in the opening moments of an audio documentary series produced by Princeton students in the fall course “Audio Journalism: The Art of Narrative Storytelling for Radio and Podcasts.” The course was taught by Joe Richman, a Ferris Professor of Journalism and the founder/executive producer of the long-running podcast series “Radio Diaries,” and featured a fall break reporting trip to Mound Bayou, Mississippi.

Listen to the nine-part series, called “Jewel of the Delta,” online. 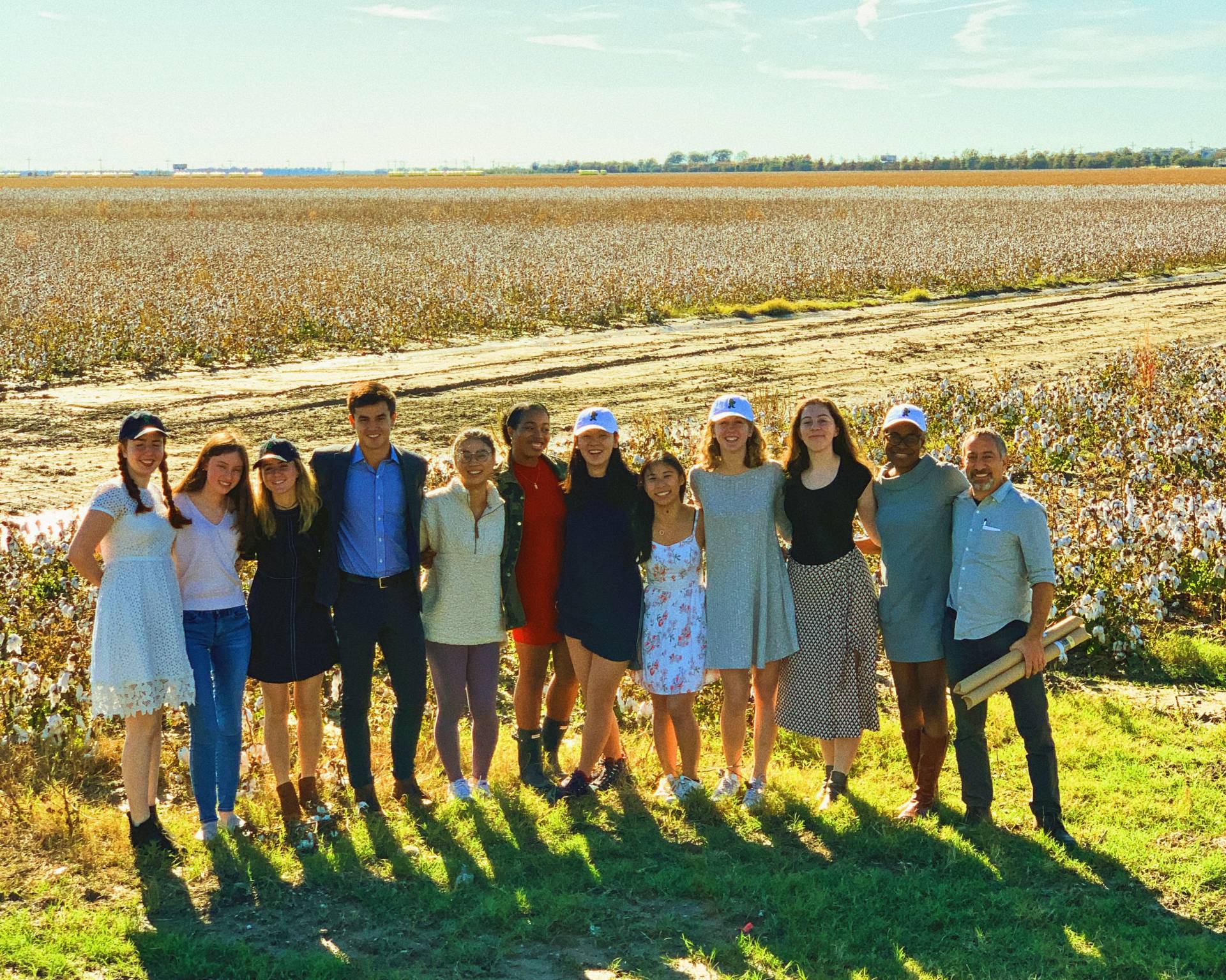 Photo by Bryant Blount, Class of 2008, Office of the Dean of Undergraduate Students

“A good radio story does more than just convey information,” said Richman. “It whispers in the listener’s ear and lodges in the brain forever. The heart of radio reporting involves going out into the world.”

Richman wanted to choose a particular place to take the students, where they could “use their microphone like a passport, hitting the streets, talking to people, meeting interesting characters, and uncovering surprising and important issues.”

He learned about Mound Bayou while visiting the Smithsonian National Museum of African American History and Culture with his children about a year ago. It was founded in 1887 as a cooperative, self-governed African American community. “The town intersects in amazing ways with many chapters of American history: Jim Crow, the civil rights movement,” he said. “The Emmett Till murder [took place] nearby and Till’s mother and the black journalists covering the trial all stayed in Mound Bayou. Medgar Evers was politicized in Mound Bayou.”

Errin Haines, a Ferris Professor of Journalism and editor-at-large at The 19th, a new digital newspaper covering gender, politics and policy, was a co-leader on the trip. In the fall, Haines, a former AP reporter on race and ethnicity, taught the course “The Media in America: Black Women and the 2020 Election.”

Richman imagined the students’ stories would focus on the history of Mound Bayou. However, once the students began their reporting, they gravitated to current events. “And I think that was the right choice,” Richman said. “I encouraged the students to pursue stories that felt both specific to Mound Bayou and universal. Since these are audio stories, it was important to find good characters, scenes and specific stories rather than just topics.” 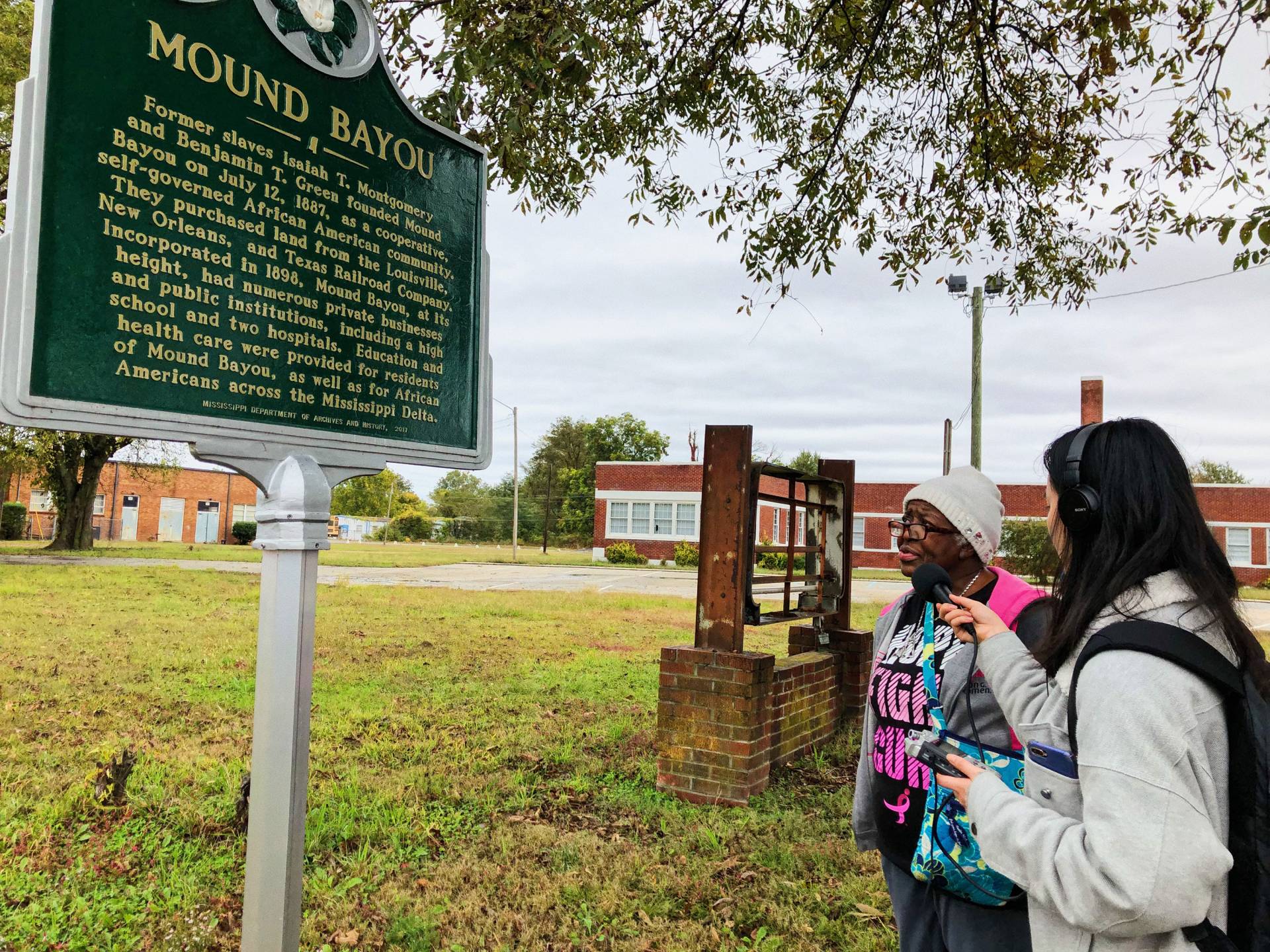 One of Mound Bayou's residents, Elaine Baker, gave us a brief walking tour of the town on our second day. Fewer than 1,500 people live in Mound Bayou today, and Ms. Baker pointed out now-empty buildings that once bustled with activity. Hearing her paint such vivid stories of her childhood and of the town was a stunning reminder of the significance of reporting such stories and writing them into history. Caption by Brillian Bao, a member of the Class of 2020 and a politics concentrator who is also pursuing a certificate in journalism

The students began their trip touring civil rights sites in Montgomery and Selma, Alabama. On their first evening in Mound Bayou, they met over dinner with the mayor, Eula Peterson, and other residents at Peterson’s church, which two local reporters helped organize. From Wednesday to Saturday, the students spent full days and evenings reporting — gathering an average of 15 to 25 hours of material for each episode.

They produced stories on the recent closing of the local high school; the plight of small businesses; a program to educate local farmers about sustainable farming; and more. One story captures how the local elementary school uses Mound Bayou's past to help children thrive in the present and plan for their future, or as one young student puts it: "History is like glue — it keeps the town stuck to the ground."

The stories are infused with larger issues of racial discrimination, unemployment and malnutrition, but also with hope. For example, Mound Bayou, located just off Route 61, “the blues highway,” is trying to reinvent itself to capitalize on the new wave of cultural tourism.

At a launch event for the podcast series held on campus on Jan. 16, several students introduced their episode by sharing a bit of the back story from their reporting experience.

Senior Rose Gilbert, who is concentrating in the Woodrow Wilson School of Public and International Affairs who is also earning a certificate in journalism, said her episode, “Three Generations,” started with an unexpected turn of events. She was outside in the rain in front of Joni’s Nook & Laundry, “the best and only restaurant in Mound Bayou,” she said, when Tamika Gant, daughter of owner Rosie Gant, let her in even though the restaurant was closed.

Gilbert learned the restaurant is named for Joni Gant, one of Rosie’s 10 children — all of whom live in Mound Bayou — who was killed at age 15 in a car accident. Joni’s brother, who was driving and swerved to miss a dog, and two sisters, one in a car seat, survived. “My story took on a life of its own — a story of the town through three generations of a family, what drew them to Mound Bayou and what kept them in Mound Bayou,” said Gilbert, who intends to pursue a career in journalism.

Richman said he hopes the students’ experience in Mound Bayou stays with them. 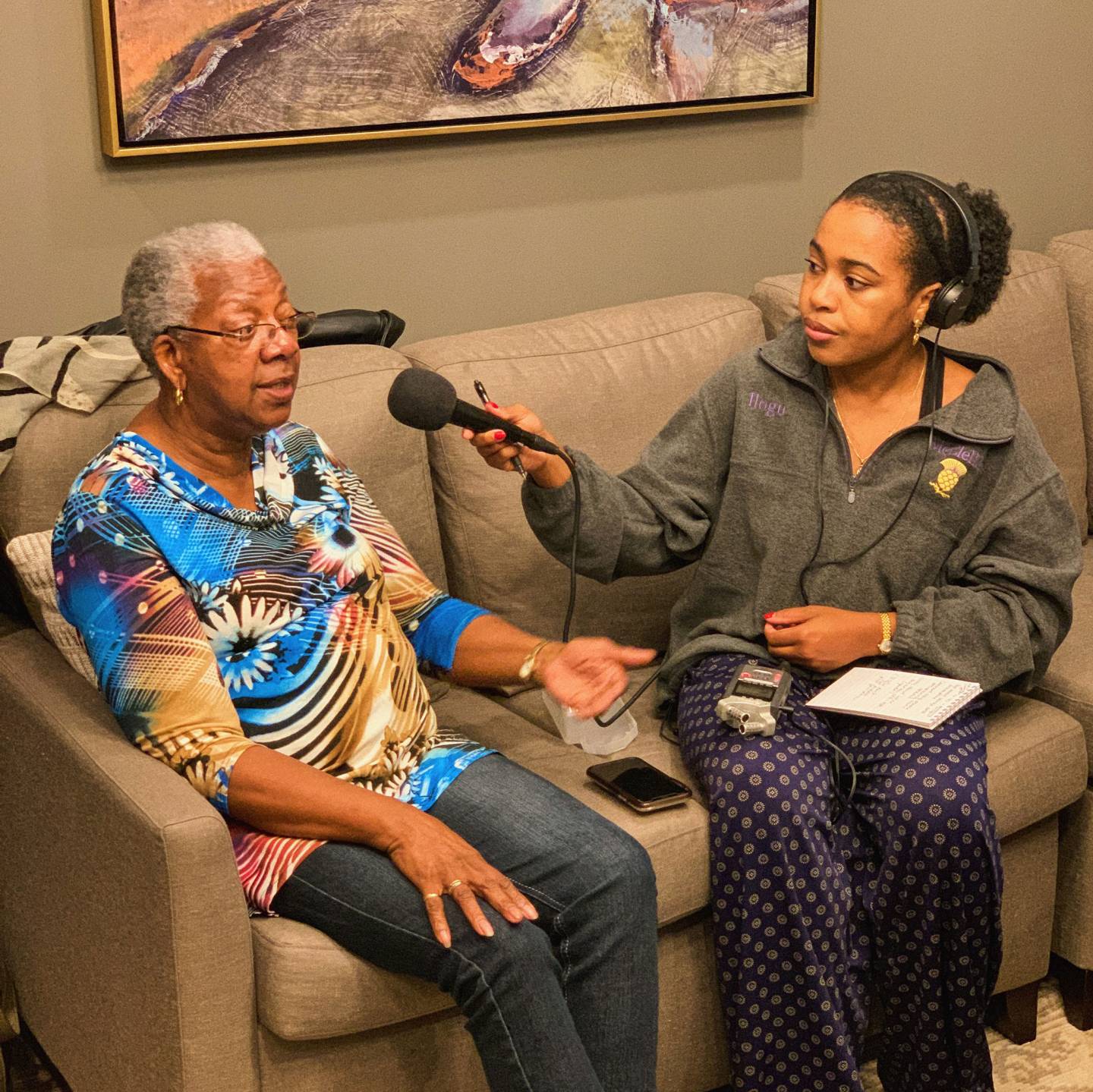 Here I’m interviewing Mound Bayou’s mayor Eulah Peterson for my story about the history and legacy of Mound Bayou. She came to our “newsroom” (a suite in the local Cotton House Hotel) and really helped me get a new perspective on my piece. Mound Bayou is an incredibly important site not just for black American history, but for the history of America and the black diaspora as a whole. Caption by Chisom Ilogu, a member of the Class of 2021 and a history concentrator who is also pursuing certificates in African studies and journalism

Photo by Bryant Blount, Class of 2008, Office of the Dean of Undergraduate Students

“For me, the most rewarding thing about being a journalist is getting inside the story,” he said. “Being invited into people’s lives, homes, churches, workplaces, families. It’s rare to have the kind of access we had. And all of the students dove into that part of the project in a beautiful and human way. I think that’s the part they’ll remember.”

Richman, a Peabody Award-winning reporter who has worked in public radio for more than 25 years, said he also learned from the students. “To see the process of reporting with fresh eyes is really exciting. I was reminded how uncomfortable it can be just to approach people and ask for an interview. And I was also reminded how rewarding that discomfort can be.”

He continued: “I also learned a lot about race on this trip. The topic of race was always under the surface, as we toured civil rights markers and in almost every conversation we had in Mound Bayou. Our students came from many different places with many different perspectives, and I found it exciting the way we talked about race openly and honestly.”