Whether it's television, film, theater or video games, alumni and industry professionals in the entertainment field had one overarching piece of advice for Princeton University students during a recent campus workshop: there is no set path to a successful career in Hollywood.

Screenwriters, producers, studio executives and others shared their experiences breaking into the business during the event "Careers in Hollywood: Script to Screen and Everything in Between," held March 29 in Frist Campus Center. 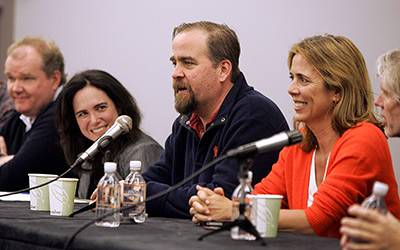 The Princeton University workshop "Careers in Hollywood: Script to Screen and Everything in Between" featured alumni and other industry professionals across the entertainment field. Screenwriting and the creative side of the business are discussed during the first panel on March 29 in Frist Campus Center. From left to right: Tim Herlihy, producer, screenwriter and former "Saturday Night Live" writer; Christina Lazaridi, a Class of 1992 graduate and lecturer in creative writing; Jeff Lowell, a comedy writer, producer and director; and screenwriter and producer Marianne Wibberley, whose daughter is a Princeton senior. (Photo by Frank Wojciechowski for Career Services)

The workshop, which Career Services co-sponsored with the Lewis Center for the Arts, is one example of Career Services' expanding efforts to connect students with career opportunities across all genres in the arts.

"Given the University's significant investment in many arts-related initiatives during the past few years, more Princeton students are engaged in the arts than ever before," said Abigail Racelis, Career Services' assistant director of the arts, nonprofit and public sector. "The fact that the panels included a combination of alumni, parents and industry professionals really showed how invested the Princeton community-at-large is in the success of our students."

Screenwriters, producers, studio executives and others share their experiences breaking into the entertainment business in this video following the workshop sponsored by Career Services and the Lewis Center for the Arts. (Video by Evelyn Tu for Career Services )

The workshop included two panels: one on screenwriting and the creative side of the industry, and one on producing, financing and other business aspects of Hollywood. Students also had the chance to network directly with professionals, including ongoing conversations on Twitter using the hashtag #Script2Screen.

Michael Cadden, director of the Lewis Center, said people are often surprised to learn how many Princeton alumni, from a wide range of majors, are working successfully in the entertainment industry. 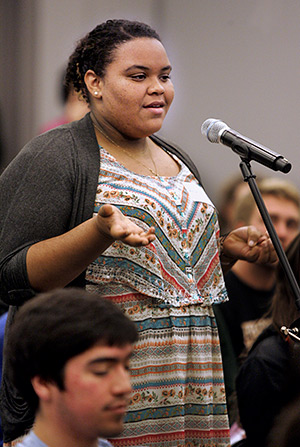 Senior Amanda Lawrence asks a question during the workshop. The event is one example of Career Services' expanding efforts to connect students with career opportunities across all genres in the arts. (Photo by Frank Wojciechowski for Career Services)

Panelists represented diverse backgrounds and expertise — from Class of 1986 graduate Albert Kim, a former journalist who is co-executive producer of the Fox drama "Sleepy Hollow," to Class of 1990 graduate Marissa Roman Griffith, an art history major and entertainment lawyer for such films as "My Big Fat Greek Wedding."

Senior Brady Valashinas, an anthropology major and film studies certificate candidate, said the afternoon was the perfect pick-me-up as he thinks about life after graduation.

"It can be really scary as a senior trying to figure out what you want to do with your life," Valashinas said. "Hearing everyone talk about their struggles, but also their triumphs, is really encouraging. It's great to know that there is not a straight path to a career in the arts — it's about following your passions and working hard."

Senior Prerna Ramachandra said it was especially interesting to learn about the behind-the-scenes business of making movies and television shows.

"As a computer science major, I have been to other Career Services events tailored to my major, but this was the first event that was really tailored to my interests," she said. "I want to take the quantitative skills I have learned at Princeton and apply them to something I am passionate about, which is film."

The workshop was the brainchild of screenwriters and producers Marianne and Cormac Wibberley, whose many film credits include the adventure blockbuster "National Treasure." Their daughter is a Princeton senior.

"There are so many paths into creative careers," Marianne Wibberley said. "We want students to realize that Hollywood is both a challenging and rewarding industry that is full of opportunities for students of all majors." 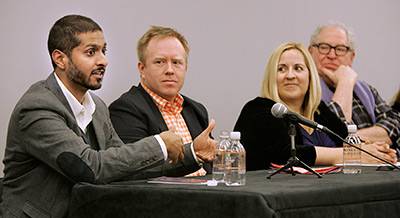 Producing, financing and other business aspects of Hollywood are discussed during the second panel. From left to right: Class of 1998 graduate Abhijay Prakash, executive vice president of business development and strategic planning at Universal Pictures; Class of 1996 graduate Paul Hanson, chief operating officer at Annapurna Pictures; Class of 1990 graduate Marissa Roman Griffith, an entertainment lawyer at Akin, Gump, Strauss, Hauer and Feld; and Michael Cadden, director of the Lewis Center for the Arts. (Photo by Frank Wojciechowski for Career Services)

Class of 1996 graduate David DiGilio, who collaborated with the Wibberleys to organize the panels, said his time at Princeton was a valuable foundation for a career as a television and film screenwriter.

"The Princeton style of education is perfect for storytelling because you're exposed to so many subjects while you are here," said DiGilio, who was a psychology major and earned a certificate in theater and dance. "When you're young, you want to focus as much on gathering stories as learning the right way to tell them. A liberal arts education goes a long way towards achieving this goal."

Career Services Executive Director Pulin Sanghvi said the event was a great collaboration among Career Services, the Lewis Center for the Arts, and a committed group of alumni and students to support students interested in the creative arts.

"As Career Services continues to move forward with our strategic reinvention, Script to Screen points the way to new event possibilities that can foster meaningful conversations between students and alumni," Sanghvi said.

During the first panel on screenwriting, topics ranged from the difference between film and television writing, to how digital and social media have changed the industry. 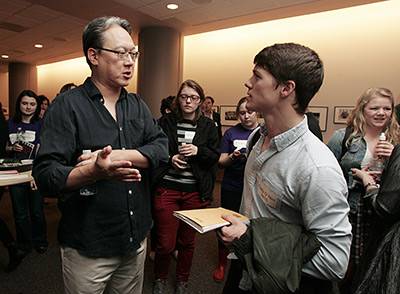 Class of 1986 graduate Albert Kim, co-executive producer of the Fox drama "Sleepy Hollow," talks with junior Cody O'Neil during a networking reception with students and alumni in the entertainment industry. (Photo by Frank Wojciechowski for Career Services)

"I've always followed the advice that there are three things that make a successful writing career: talent, luck and hard work," said Class of 2000 graduate Will Staples, who has written for movies and video games such as "Call of Duty." "Hard work is the only one you can really control. So work hard and hope that you have the other two."

Jeff Lowell, a comedy writer, producer and director, said he still follows a simple piece of advice he was given at the start of his career.

"I wrote a letter to a writer at 'Cheers,' which is a television show that was on before you were born," Lowell joked with the audience of students. "He sent my letter back and simply wrote on it 'writers write.' And that was it. You have to write one, and then write the next one and the next. Writing is a muscle. The more you exercise, the better you get at it."

When asked about the Internet and digital platforms like Netflix or Hulu, panelists said they have opened up the ways for artists to break into Hollywood.

"These days, people get television shows based on their Twitter feeds," Kim said. "There are so many more ways to get your ideas and methods out there."

On the business panel, speakers talked about Hollywood as the ideal industry to merge a passion for the arts with skills in finance, law or other fields.

"I studied engineering at Princeton and was an investment banker after I graduated, but I always loved movies," said Class of 1996 graduate Paul Hanson, chief operating officer at Annapurna Pictures, whose recent film projects include "Her" and "American Hustle."

Class of 1998 graduate Abhijay Prakash, executive vice president of business development and strategic planning at Universal Pictures, said he realized early in his career that he needed to work for a product he cared about.

"In our case, you have to love films," he said. "It's a really easy and identifiable source of inspiration for me to go to work on the Universal backlot and see television and films being made." 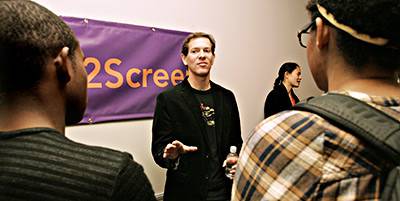 Class of 1996 graduate David DiGilio, a film and television screenwriter, shares his advice with students about working in Hollywood. (Photo by Frank Wojciechowski for Career Services)

Daniela Lundberg, a class of 1998 graduate and partner at Red Crown Productions, likened being a movie producer to being the founder and CEO of a start-up company.

"You are the one getting something off the ground and pushing the ball forward," she said. "The process of actually making a movie can be the most rewarding when you have 60 people on set all working in sync toward the same goal. It does not always happen, but when it does, it's the greatest feeling because you helped launch that ship."

Reflecting on the workshop, Racelis said she is looking forward to seeing how students take what they learned to further their professional connections and career plans.

"For me, the true impact of the event is told in the stories that students share about what happened after the event — what they learned from these amazing panelists and how they used that knowledge," she said.

Full videos from the business panel and screenwriting panel will be posted by Career Services.

Seniors encouraged to make their lives 'a truly great story'