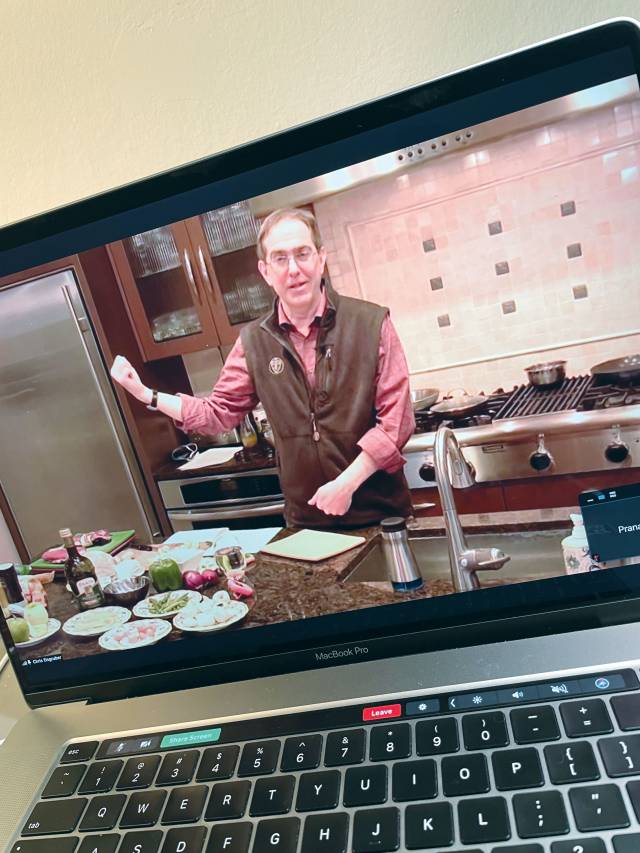 President Christopher L. Eisgruber leads the online workshop "How to Fry an Egg: Simple Cooking for Fun, Friends and Yourself" during the University's inaugural Wintersession, a vibrant, virtual two-week experience featuring more than 300 workshops and events led by faculty, staff, students and alumni.

On Jan. 26, working from his home kitchen, Eisgruber taught 13 undergraduates his culinary secrets during “How to Fry an Egg: Simple Cooking for Fun, Friends and Yourself,” a two-hour online workshop that was part of the University’s inaugural Wintersession, held from Jan. 18-31.

“It was great to see the students. I had fun, and I hope that they did, too,” Eisgruber said. “I have new admiration for anyone who leads a cooking class: it’s not easy to teach and mind a hot stove at the same time!"

“The mission of Wintersession is to bring the Princeton University community together for a vibrant, two-week experience that offers unexpected, active and intriguing non-graded learning and growth opportunities,” said Judy Jarvis, director of Wintersession and campus engagement.

From "Start Your Podcast Engine" and "Ukulele for Beginners" to the closing keynote, “Beyond the Resume with Jonathan Van Ness” — the television personality, podcaster and celebrity hairstylist who stars on Netflix’s series “Queer Eye” — programming featured more than 300 workshops and events. Most sessions were led by members of the University community eager to share their skills and passions.

Nearly 70 hands-on workshops — taught by Princeton, Trenton and Philadelphia artists and Campus Recreation fitness instructors — were added in December to support returning students confined to their sleeping spaces during the arrival quarantine period.

Close to 2,700 students, faculty and staff registered for the wide range of the offerings — with most students signing up for three or four events. Highlights included: 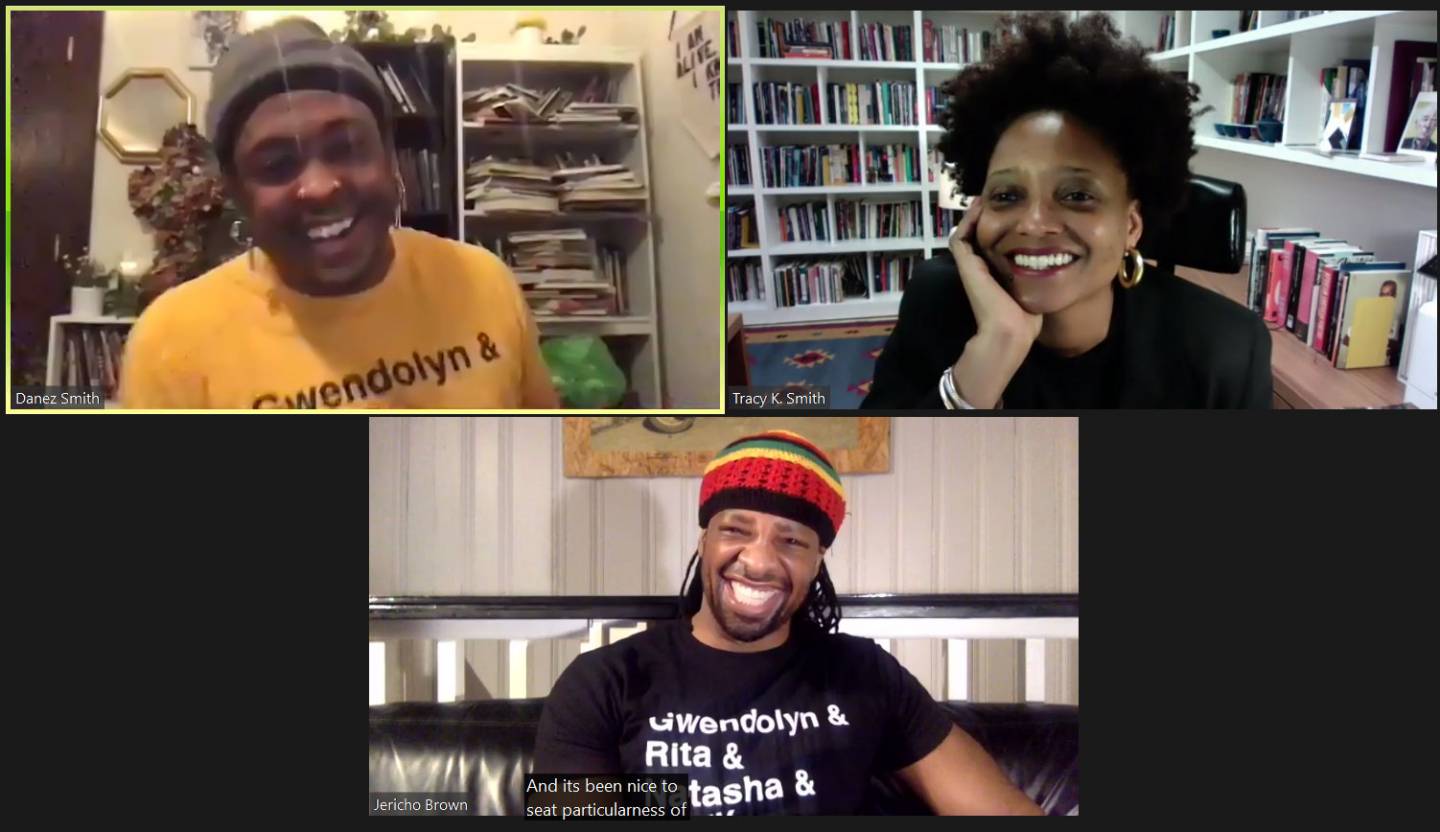 Photo courtesy of the Office of Wintersession and Campus Engagement 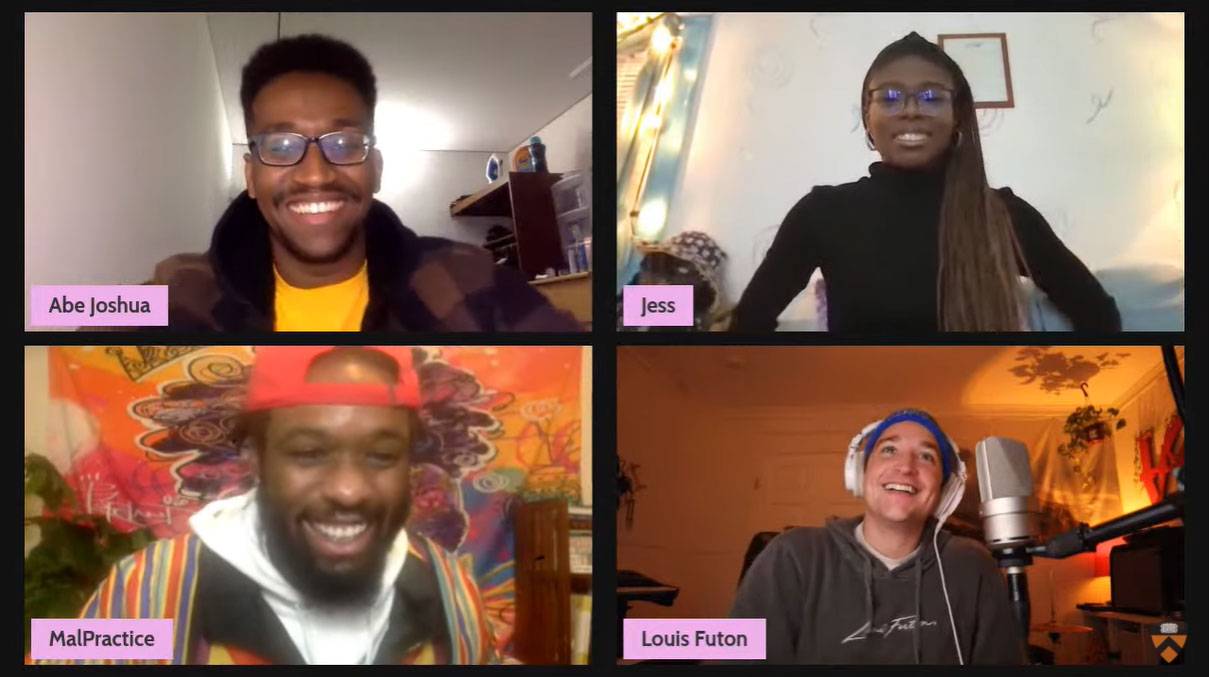 While Wintersession was originally planned to be held in person, the pivot to a virtual format presented some unexpected opportunities. “The silver lining has been that students, faculty and staff have been able to connect with each other from wherever they are, and the workshops are able to accommodate a lot of people,” Jarvis said. “I have been thrilled with all of our faculty and alumni partnerships, especially for our evening events. I think it bodes really well for future fabulous Wintersessions!”

Following is a peek into an art workshop in which participants created a personal “healing bowl” and a behind-the-scenes event featuring alumni who work in Hollywood.

From 2005-07, Hope VanCleaf, the communications assistant in the Lewis Center for the Arts, ran six-week workshops at the YWCA's Breast Cancer Resource Center for women living through all stages of breast cancer, instructing them how to use art as a tool of expression.

She adapted one of the projects from that series for her two-day Wintersession workshop “Healing Through Creativity,” designed to invite anyone in need without exception to find healing and empowerment through art making. Every participant explored their own creative self by making a “healing bowl.”

She sent each of the participants — seven undergraduates and two graduate students — a package of art materials, including a gesso’ed papier-mâché bowl that she had pre-made herself, assorted acrylic paints, gloss and matte gels, a paintbrush set, an assortment of metallic foil and tissue paper squares, acrylic gems, glitter, glue, disposable paint trays and a journal.

While VanCleaf was initially concerned about the virtual format, she “witnessed in awe and amazement how each participant transformed the Zoom environment into their own private studio as they focused entirely on their own creative journey.”

The students were asked to capture the experience in their own words using the journals they received.

One student wrote: “Towards the end of my senior year of high school there were some moments that knocked me down. So when I received my bowl, I knew I wanted it to be strong and sturdy, something that grew and something that was beautiful.”

After painting a sky on the outside of her bowl, she wrapped pieces of aluminum foil together to form the trunk and branches of a tree.

She wrote: “I now had something that grew. The last thing I needed was something strong and sturdy, so I added purple twirling roots to my tree… As I painted my bowl and shaped my tree and put down my roots, I thought about some of the moments that I’ve experienced. Those are moments that I will always go back to and that I will always remember, moments that have rewritten the world that I live in. But there are also moments ahead of me that I’m learning to still reach for and grow towards. I hope that my roots will ground me so that I may continue to grow into the sky.”

‘Script to Screen: Tigers in Hollywood’

How do you get your foot in the door in Hollywood? In this two-part career seminar, participants got to rub virtual elbows with an A-list of film and television producers, screenwriters, showrunners and actors who hopped on Zoom from their homes in Los Angeles and New York.

"Our vision for the seminar was to provide participants the opportunity to hear from, and connect with, their fellow Tigers working in entertainment,” said Angel Gardner, associate director, external affairs, in the Lewis Center for the Arts. “We had an amazing group of alumni volunteers who participated as panelists on the first day. They shared their career journeys honestly, providing candid and sometimes surprising insights into the realities of working in the business. Day two was more focused, with workshops led by alumni that introduced participants to specific careers within the industry.”

More than 100 students and members of the University community tuned in to day one — a lively conversation moderated by Matt Iseman, a 1993 alumnus, television personality, host of NBC’s “American Ninja Warrior” and A&E’s “Live Rescue” and the 2017 winner of “Celebrity Apprentice,” where he raised over half a million dollars for his chosen charity, the Arthritis Foundation.

Many of the panelists shared how Princeton played into their career paths — sometimes in unexpected ways.

Iseman, for example, was a history major and pre-med at Princeton. He remembered one history professor who “made history come alive through stories. Even in reality TV, we’re sharing stories.” While attending medical school at Columbia University, where his father was a professor, Iseman decided to make the leap to stand-up. “My dad said: ‘Life is short. Do what makes you happy.’”

Iseman credits his Princeton education for his focus and determination. “For me, my best friends are 40 to 50 of my Princeton classmates who are all well-rounded. The drive to be successful — that to me was the benefit of Princeton.”

Ellie Kemper, a 2003 alumna, comedian and actress perhaps best-known for her title role on “The Unbreakable Kimmy Schmidt” as well as “The Office” and the movie “Bridesmaids,” majored in English and was a member of the field hockey team her first year at Princeton. While she cut her comedy teeth as a member of the student improv troupe Quipfire! and the Triangle Club, she credits “the discipline you learn through academics and athletics” for building her resilience in the entertainment industry.

Matt Iseman (left), a 1993 alumnus and host of NBC’s “American Ninja Warrior” and A&E’s “Live Rescue,” moderated a "Script to Screen" discussion with alumni in Hollywood including comedian and actress Ellie Kemper, Class of 2003; writer Taofik Kolade, Class of 2008; and producer Wyck Godfrey, Class of 1990.

Taofik Kolade, a 2008 alumnus and a writer/producer for "Atlanta" on FX and "Barry" on HBO, was a mechanical and aerospace engineering major at Princeton but became interested in film after taking an adaptation class his senior year taught by an industry professional. He got his first internship through the networking group Princeton in Hollywood.

Kolade, who said he is driven by telling stories of marginalized people, said to fight nerves he scripts out his pitches. “I think about it this way: How would I pitch this idea to a friend?”

“Most of my projects are books to movies,” said Wyck Godfrey, a 1990 alumnus who majored in English and is a partner in the production company Temple Hill Entertainment whose film and TV credits include the “Twilight” saga series and “Maze Runner” series.

“I was always drawn to emotion … things that exercise your heart,” said Godfrey, who was president of Paramount Pictures’ Motion Picture Group from 2018-20, where he oversaw the production and release of “A Quiet Place,” “Book Club” and the sixth installment of “Mission: Impossible.” “I am inspired by great stories and the way film can help us process emotions that are difficult to express.” He encouraged students to “read all those books on the syllabus.”

Abhijay Prakash, a 1998 alumnus, president of Universal Filmed Entertainment Group and former chief operations officer for DreamWorks Animation and Focus Features, said: “Between streaming and the ‘creator economy,’ there is great demand for stories. Be expansive … there’s lots of ways to make your mark across lots of different platforms.”

Godfrey agreed. “There are more online festivals and screening festivals than ever. I have 15 employees who scour the internet for screenwriters and talent. With a Princeton degree, you’ll get noticed.”

Howard Gordon, a 1984 alumnus and member of the Lewis Center for the Arts Advisory Council, is an award-winning television writer, showrunner, producer and author whose credits include “Homeland,” “24” and “X Files.” He and his business partner and classmate Alex Gansa were both English majors who also earned certificates in creative writing.

He had this advice for budding TV writers: “What’s the emotional contract you want to make with your audience? Why this show and why now? And, why you?”

Alexander Woo, a 1993 alumnus and writer/producer for television whose credits include HBO’s “True Blood” and AMC’s “The Terror: Infamy,” started his career as a playwright.

“My playwriting was all Asian themes,” said Woo, who made the pivot to Hollywood after running into a Princeton classmate, Jacqueline Swanson, who asked him, “Have you ever considered writing for TV?”

He is currently working with Netflix as executive producer of an adaptation of Cixin Liu's “Three-Body Problem,” considered the greatest Chinese science fiction trilogy. “The climate we’re in has allowed for a greater diversity of voices,” he said.

Alumni presenters on day two led workshops on script writing and pitching (Jennie Snyder Urman, Class of 1999), film music (Scott Salinas, Class of 1997), digital animation (Ricky Arietta, Class of 2013) and unconventional paths to Hollywood careers (Ben Neumann, Class of 2014, and Ashley Alexander, Class of 2009). “Script to Screen: Tigers in Hollywood” was presented by the Lewis Center for the Arts, Princeton in Hollywood and the Center for Career Development.

Reunions Online: Princeton is where you are