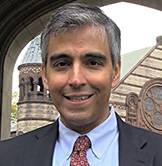 Career Services Executive Director Pulin Sanghvi says the HireTigers Meetup, billed as an alternative to the traditional career fair, is part of Career Services' ongoing efforts to reimagine its programs for students.

Video still from Evelyn Tu for the Office of Career Services

On a recent sunny Friday, hundreds of Princeton University students mingled with employers representing a variety of fields under a large tent behind the Office of Career Services. The inaugural HireTigers Meetup was an alternative to traditional career fairs as Career Services reimagines its programs to foster new and more meaningful connections between students and employers.

The Sept. 19 event, which replaced the General Interest Career Fair previously held in Dillon Gymnasium, swapped lines of recruiter booths with industry-specific hubs and small bistro tables to spark conversation. Suits and formal dress were traded for business-casual clothing, and panel discussions with alumni sharing their career journeys were added to the program.

"The event was designed from the ground up with deep input from the students. They helped us challenge the assumptions of the traditional job fair model," said Executive Director of Career Services Pulin Sanghvi. "We held it outdoors in an informal setting, and we involved alumni and employers in new ways, and there was a sense of genuine exploration and serendipitous conversations happening all around us."

Junior Avanthika Srinivasan, a double bass player and Indian classical vocalist, said she came to the event seeking guidance on turning her passion for performance into a profession. She recently switched her major from chemistry to French with a certificate in theater.

"The day has been really valuable for students like me who want to explore a new field. I'm really trying to meet people and learn about their experiences and see where it takes me," she said after attending the panel "Backstage Pass to Careers in the Arts." It featured Grammy- and Emmy-award winning music director Paul Bogaev, Prospect Theater Company managing director and Class of 1996 graduate Melissa Huber, and others. 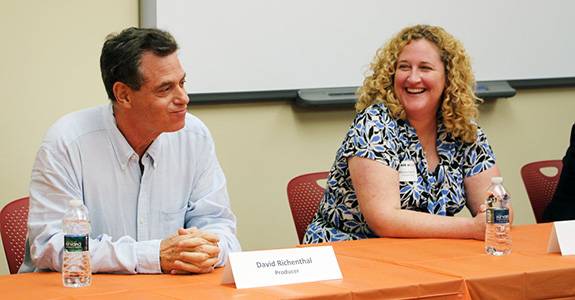 Trayvon Braxton, a Class of 2014 graduate who now works for the nonprofit Applied Public Policy Research Institute for Study and Evaluation (APPRISE), said the event's format allowed employers and students to learn more about each other.

"Traditional career fairs can come off somewhat stuffy and formalized. You don't really get to know much about the student beyond their interest in a job," he said. "It's nice to have time to talk about their various interests and activities on campus, and the more personal aspects of the student's job search."

Aaron Barzilai, director of basketball analytics for the Philadelphia 76ers, said he hoped to expose students to an unexpected career path. The HireTigers Meetup was his first time recruiting on campus.

"Just like we want the best players in the world on our team, we also want the best analysts to help build better basketball models and tools for our coaches and staff," he said. "There are a lot of talented students at Princeton who aren't even aware that job opportunities like this exist or that it would be a good fit for them."

"It's really important to hear there are other opportunities out there besides what everybody thinks Princeton students want to do," said Labatt during the panel "You Are Not What You Declare: Debunking the Major-Career Connection." "No matter what you are majoring in, you can find a company that's the right fit for you and values your skills."

The HireTigers Meetup will serve as a model for future Career Services programs, including smaller recruitment events focused on specific industries and fields. 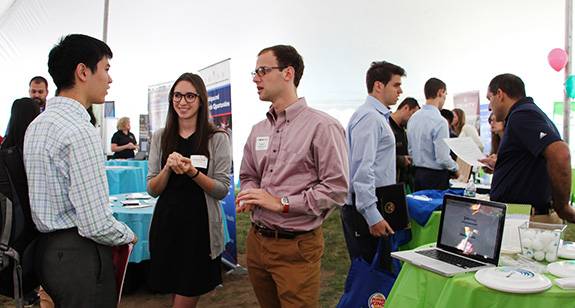 Class of 2013 graduate Benjamin McClamrock (front right) and Stephanie Weber speak with Princeton students about their work at DC Energy during the HireTigers Meetup.

'A New Way to Hire Tigers'

Implementing the Mission of the Robertson Foundation