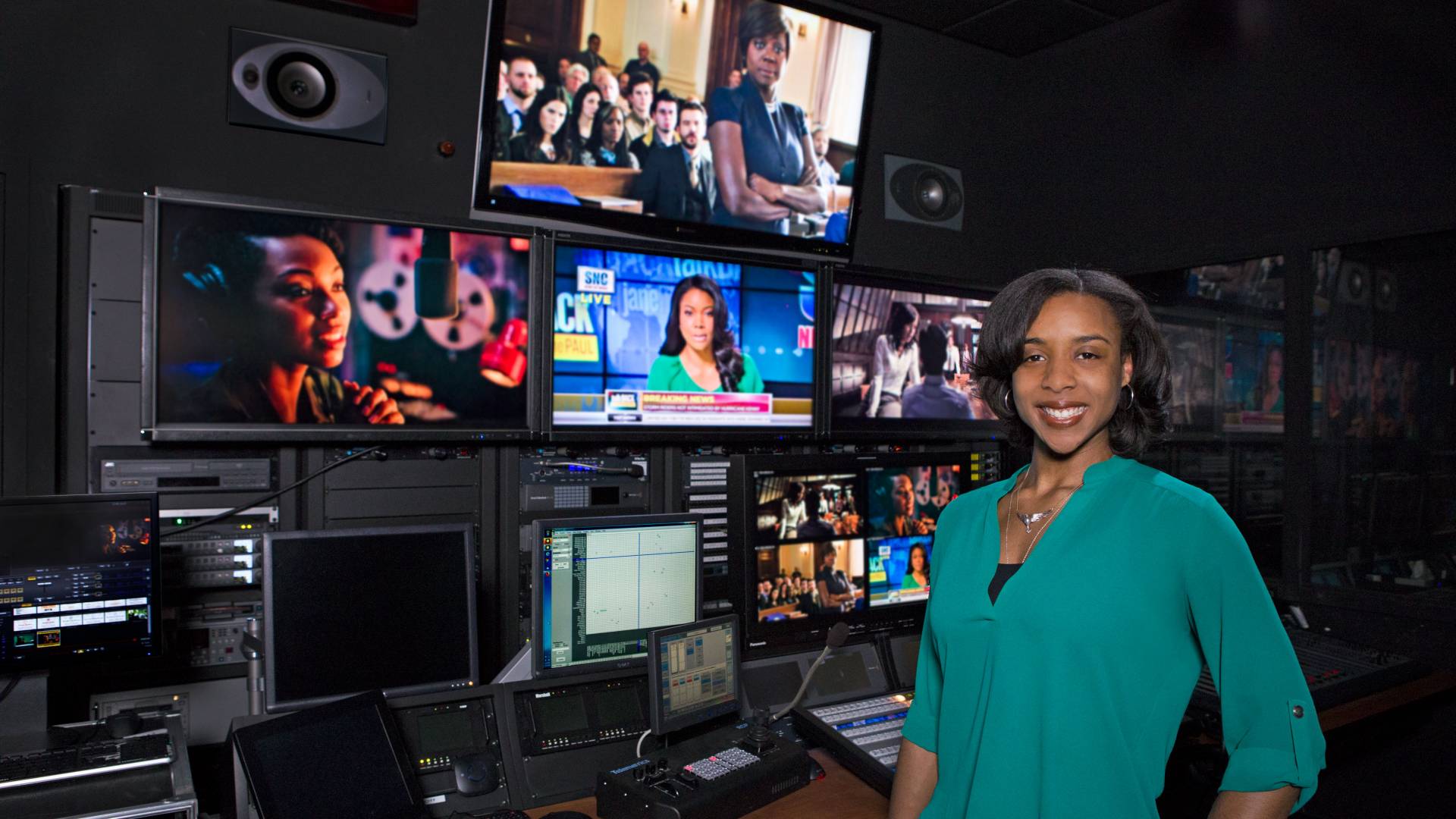 For her senior thesis, sociology major Taylor Griffith, pictured here in the Princeton University Broadcast Studios, explored how black women are portrayed in lead roles on television series. After graduation she plans to pursue a career in entertainment.

Taylor Griffith wanted her senior thesis to focus on strong black female leads on television shows, so she began her investigation the way most students do, by checking the available literature. But when the Princeton student made her first trip to B Floor at Firestone Library, she came up short.

“I looked all over,” said Griffith, a sociology major who also is earning a certificate in gender and sexuality studies. “There’s a book on Oprah, and there’s a book on Cosby. There are five books on ‘Game of Thrones.’ There’s absolutely nothing on the television shows I’m interested in.”

She punched her topic into Google, searching for books about the slew of current television series that feature black women as lead characters, shows like “Scandal” and “How to Get Away with Murder,” both produced by Shondaland, Shonda Rhimes’ production company. “To my knowledge, there is not a single, in-depth book analysis of Shonda Rhimes’ shows or the shows I have opted to look at,” Griffith said. “It was baffling to me.”

What she did find was plenty of research on the television industry as it relates to black women, African Americans, stereotypes, racism and feminism. But the intersection of these topics and how they coalesce on the small screen is a little-studied frontier. “It’s very exciting in that respect,” Griffith said.

Griffith, of Glen Mills, Pennsylvania, began exploring questions about media representation in her junior paper, when she studied advertising targeted at women. Realizing that messaging in television shows could be even more consequential — since viewers sometimes spend years with TV characters as opposed to 30 seconds or less with an ad — she started her senior thesis research soon after the ink had dried on her junior paper.

Griffith’s thesis adviser, Kim Lane Scheppele, the Laurance S. Rockefeller Professor of Sociology and International Affairs and the University Center for Human Values, encouraged her to watch the shows and determine her own interests for possible analyses. Griffith started with the first several episodes of “Scandal,” one of her favorite TV shows, which she has watched from its debut in 2012. She followed with “How to Get Away with Murder,” “Being Mary Jane,” “Queen Sugar” and “Dear White People.”

In all, she examined six characters on five series, selecting strong black females, in particular, as her subjects. “I started writing down anything and everything that seemed interesting, and it was only then that I started seeing these emerging patterns,” Griffith said. “After that I did this whole character chart, where I divided up all [the] plot points.”

Comparing the shows, Griffith first analyzed how the women were presented and how their lives were constructed. Next, she explored whether such representations accurately reflected black women’s lived experiences. Finally, she hoped to learn what message these series communicated. As a trope, Griffith said, the strong black woman carries the burden of remaining strong while being a caregiver to others.

All the characters Griffith studied are in powerful, high-status positions or are leaders within their communities. For example, Olivia Pope of “Scandal” is a former White House director of communications and owner of a prominent crisis management firm. Mary Jane Paul, the namesake character in “Being Mary Jane,” is a TV news anchor for the fictional Satellite News Channel. Each of the characters she studied, Griffith observed, is either in an interracial relationship or a relationship with a partner of lighter skin. Often, the women are in relationships with married men.

Contrasting the shows with contemporary life in the United States, Griffith said, “Proportionately, the rate of interracial relationships [in the shows] is significantly higher than what you’ll find in U.S. statistics.” She noted that black women are the largest demographic of single women in the United States, and, as for holding high-ranking positions, black women historically have been underrepresented in those roles in American society.

“The women kind of exist on the spectrum where they’re not entirely stereotypical, but there’s a discrepancy between their lives and actual women’s experiences,” she said.

In regard to plot lines about race, Griffith said a majority of the shows accurately represent blackness as an identity. “I think it’s this balance between incorporating race, but also showing it isn’t everything for these women,” she said. “Their lives go beyond their race.”

The shows depict the women both in their personal and professional lives, but unlike in shows that feature men, the emphasis tends to be on their interpersonal relationships, she said. “Most of the time it will be something that revolved around a woman’s relationship with a man or her family or something about relationships, whereas you can have a series about a man that is far from centered around his dynamic with others,” she said. “Even though these are powerful, prominent women doing lots of great things, plots about their careers are either embedded in romance plots, or, if they are solely about the women’s work, tend to be secondary plots that just last for an episode or two.”

To learn more about the shows, Scheppele suggested that Griffith interview the TV producers, but Griffith was skeptical about her ability to get past the gates at Hollywood studios. “I think what’s great about Professor Scheppele is that she’s very much a ‘go-for-it’ type of adviser,” Griffith said. “She told me about a couple of people on campus who might potentially have connections.”

At that same time, Griffith was taking a screenwriting course with A.M. Homes, a lecturer in creative writing and the Lewis Center for the Arts, who has written extensively for television and is co-executive producer of “Falling Water.” She shared some email contacts with Griffith.

"Taylor is a wonderful student exploring important subject matter that is at the core of the entertainment industry today," Homes said.

“The day the [senior thesis] funding application was due, I had a meeting with [Professor Scheppele],” said Griffith, “and I said, ‘Well, I have these email addresses of people I could reach out to,’ and she said, ‘Great, you should apply for funding and go out to L.A. and meet all these producers.’”

Griffith raced to meet the deadline and received funding from the Department of Sociology, Department of African American Studies and the Office of Undergraduate Research.

She traveled to Los Angeles in January to meet with Betsy Beers, executive producer of Shondaland, and Justin Simien, director of “Dear White People.” Griffith later had a phone interview with Tamara Gregory, creative executive for BET Networks, which produces “Being Mary Jane.”

Their insights changed the way she approached her topic, she said.

The characters can — and should — be viewed in their complexity, Griffith said. “We need to take a step away from trying to reduce these characters to one-dimensional stereotypes and accept them for the three-dimensional human beings they are,” she said.

Understanding that perspective increased her interest in working in entertainment, perhaps even television, and finding ways of progressing media representations of race and gender, she said. “I think all of these shows are illustrations of how important black women’s stories are, but also, how [these women] are relatable characters; how anyone can see them and feel a connection to them; how these can be series that are popular among broader audiences,” she said.