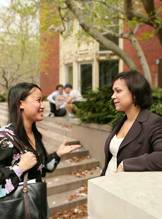 For her senior thesis, politics major Janice Dru (left) explored how gender differences in group decision-making settings might affect the U.S. political landscape as women continue to make greater inroads. Working with adviser Melissa Harris-Lacewell (right), an associate professor of politics, Dru developed an experiment to study such differences by recruiting students from Princeton and Rutgers universities to work in groups to allocate a budget for a fictitious student committee. (Photo: Denise Applewhite)

Quintessentially Princeton The senior thesis, an independent work that typically runs about 100 pages, gives seniors the opportunity to pursue original research and scholarship under the guidance of faculty advisers. In the recently re-issued guide, "The Thesis: Quintessentially Princeton" (.pdf 1.9 MB), Nathaniel Fintz joins several members of the class of 2006 in reflecting on their experience writing a senior thesis. "… the most wonderful aspect of the senior thesis is that it provides an opportunity not only to say something original, but also to blaze your own path into scholarly territory that may be largely unexplored or uncharted," he writes. "Seizing such an opportunity is perhaps the greatest way to approach your biggest undergraduate project, especially if you feel passionately curious about your topic, and if you have your adviser's good guidance along the way." The May 7, 2007, Princeton Weekly Bulletin profiles three students who have followed their passions into new realms for their senior thesis projects. Related articles: • Seeking Mars survival secrets • Writing the melody of a novel

With Nancy Pelosi serving as the first female speaker of the House of Representatives and Hillary Clinton vying for the presidency, the role of women in U.S. politics continues to expand. Politics major Janice Dru decided to investigate how a greater female presence might affect the political landscape — and used her peers as test subjects.

Through her experience both in the classroom and in the workplace, Dru has developed a strong interest in how behavior varies by gender in collective decision-making settings. Dru said she has been struck by differences in how men and women interact in groups with varied gender representations, both in her course precepts and during recent summer internships working in marketing for Merrill Lynch.

As Dru developed ideas for her senior thesis, examining gender roles and behavior in decision-making "seemed like a really relevant topic right now, with women becoming more prominent in Congress and running for the presidency," she said. "I also thought it would be applicable to the work environment as well as to the political environment."

The challenge in refining such a broad topic, Dru said, was that "you can't actually observe legislators as they work in their committees behind closed doors to evaluate whether women act differently." Working with her faculty adviser, Melissa Harris-Lacewell, Dru explored the question by studying a microcosm of fellow college students.

In addition to her politics concentration, Dru is a certificate candidate in visual arts and in March presented a thesis exhibition of her paintings. She took a creative approach to her politics thesis as well. Dru developed an experiment in which she created a fictitious student committee and visited several classes at Princeton and Rutgers universities to ask students for help in allocating funds to support various university-related issues, such as improvements in health care, diversity-building initiatives, financial aid or grading policies.

Dru recruited 60 students, who worked in 17 groups of two to seven members to advise the fictitious committee on how to divide its $100,000 budget among 11 areas of interest. Dru videotaped the sessions to collect data on how men and women behaved within the groups.

Dru's major finding was that dissension occurred at a much higher rate in the nine all-male or majority-male groups, while consensus was achieved more frequently in the other eight groups, which were either entirely female, majority female or equally divided by gender. In her thesis, she notes that males' historic political dominance may explain this behavior.

But with women gaining in power in Washington, D.C., the behavior exhibited in Dru's focus groups may presage a shift in political decision-making processes, Harris-Lacewell suggested.

"There may not be major differences in the choices that get made between men's groups and women's groups, but women's groups change even the way that male participants come to those choices," said Harris-Lacewell, an associate professor of politics. "That strikes me as being extremely important. It's not just that women have a different decision-making style, but in collective decision-making the presence of women alters how the decision is made — even by the men who are part of the group. That tells us a lot about organizational theory and about what would happen if we moved to a Congress that had a greater balance of men and women."

In addition to assembling and observing the focus groups, Dru worked with the Survey Research Center to send a Web survey to 600 Princeton students to collect data on what would motivate students to participate, which yielded responses from 109 students. She presented a similar survey to students she visited in class.

From these surveys, Dru found gender differences among topics in which students expressed more interest: Men tended to prefer issues related to university administration, careers and politics, while women respondents were more concerned with education, philanthropy and diversity. She provided a variety of incentives in seeking participation — ranging from the goodwill of helping fellow students to payments of $5 or $10 to a chance to win $50 — and found that women tended to be most responsive to guaranteed cash payments versus other incentives, more so than the male respondents.

Dru also sought to study racial differences in behavior and participation, both overall and within gender categories. She found that more white and Asian students agreed to participate in her study than black and Hispanic students, and that whites and Asians were more likely to take leadership roles in group settings. But the sampling of participants was too small to yield statistically significant results regarding gender differences within racial categories.

"I continue to be impressed by the social science behind this project," Harris-Lacewell said. "She looked at a big phenomenon — the question of gendered and racialized decision-making, which has corporate elements and a lot of political elements, as well as how people make choices, what gets them involved politically, what motivates men and women to get involved in collective action and what kinds of issues they would get involved in.

"Janice understood that you could have this big question but that you could investigate it in a micro setting to figure out what processes were at work and project it back out onto the big world," Harris-Lacewell said. "That's what I think is great about what she did — it's a real social science endeavor."

Plans emerge from report on leadership