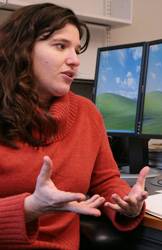 Devah Pager, an associate professor of sociology at Princeton, focuses her research on racial inequality in the United States, particularly in relation to the criminal justice system and the labor market. 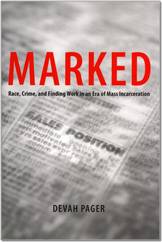 A major element of Pager's research is the criminal justice system, where black men are disproportionately represented, and from which many find it impossible to rebuild their lives. Her new book, "Marked: Race, Crime and Finding Work in an Era of Mass Incarceration," explores the roots and ramifications of this problem. Below left: Pager meets with senior Sarah Halprin, who is working on a senior thesis about the social stigma that comes along with incarceration. Photos: Denise Applewhite

As a young girl growing up in Hawaii, Devah Pager was accustomed to a diverse society, where people of different ethnic groups blended easily and many of her peers claimed "mixed" racial identities. After her move to Los Angeles for college, however, she was struck by the degree to which the rest of American society, particularly in big cities, was divided by race.

This contrast sparked a curiosity in Pager -- who is now an associate professor of sociology at Princeton -- that has guided much of her career.

During her undergraduate years at the University of California-Los Angeles, Pager had her mind set on becoming a clinical psychologist. She worked at a homeless shelter, with a crisis intervention hotline and with troubled schoolchildren, as a way of gaining counseling experience. Along the way, she came to see that many of society's most endemic problems -- poverty, homelessness, unemployment -- stretched beyond the reach of traditional psychological perspectives.

The experience of working in these inner-city settings led Pager to develop a stronger interest in exploring issues of racial inequality through a broader sociological lens. That approach has become the heart of her academic career, as she focuses her work on the factors that perpetuate racial inequality in the United States. A major element of Pager's research is the criminal justice system, where black men are disproportionately represented, and from which many find it impossible to rebuild their lives. Her new book, "Marked: Race, Crime and Finding Work in an Era of Mass Incarceration," explores the roots and ramifications of this problem.

"Roughly one in three black men will spend some time in prison in his lifetime," Pager explained. "The ex-offender population is no longer just a fringe segment of society, so the implications of having spent time in prison are becoming broader all the time." Pager has found that negative stereotypes about black men and crime continue to pervade corporate America and have unfairly swayed some employers from considering any black job applicant -- even those who have no criminal histories.

While studies of discrimination in the labor market have traditionally relied upon survey data to gauge workplace attitudes about race, Pager has taken a more comprehensive, less theoretical approach -- sending test subjects from various backgrounds into live job interviews to see how they were treated by potential employers. 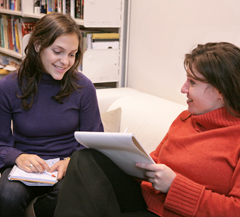 "Devah's research involves a rigorous application of experimental design methods," said Robert Wuthnow, chair of the Department of Sociology. "Her work on incarceration and discrimination is focusing attention on one of the most pressing social problems of our time."

"Devah has illuminated how the stigma of incarceration manifests in the labor market," said Glenn Loury, a Brown University economist and prominent social critic. "Her work calls attention to the basic interaction between racial identity and social class, and also between the labor market and the criminal justice bureaucracy, in the construction of America's most disadvantaged and alienated populations."

As a Ph.D. candidate at the University of Wisconsin-Madison, Pager designed an experiment to test employers' responses to job applicants of different races and varied criminal histories. She hired young men to work in matched pairs, one black and one white, and apply for various low-wage jobs in the city of Milwaukee. She created fictitious criminal records for her workers, randomly alternating the criminal history between members of the pair. Other than that, the applicants were similarly qualified.

Her results were disturbing: A white man with a criminal record was slightly more likely to be considered for a job than a black man with no criminal past. The study won the American Sociological Association's Dissertation Award. It also provided the premise of "Marked," in which Pager applied her research to current academic and policy debates about mass incarceration and the re-entry of prisoners into society.

"The field has changed a lot since I started working in the area, and I wanted to try to make the book as relevant as possible to those researchers and policy folks who are grappling with these issues," she said.

After joining the Princeton faculty in 2004, Pager and Bruce Western, a former Princeton sociologist now at Harvard University, conducted a broader follow-up study in New York City. The largest and most comprehensive project of its kind, it involved 13 applicants who went on nearly 3,500 interviews with 1,470 private employers -- with similarly stark results showing discrimination against black job seekers.

"These results did not surprise the African American public," Pager said. "However, most white Americans believe that this level of discrimination is a thing of the past, and that's simply not the case." Pager said this institutionalized discrimination is particularly dangerous because barriers to legitimate employment make it more likely that young men will turn to, or return to, a life of crime.

"Evidence of criminal activity is, and should always be, a relevant concern for prospective employers," she said. "But public policy needs to help employers figure out how to work with people who are generally on a path toward rehabilitation." She cited tax credits and incentives as policies that have been effective on a modest scale and said she would like her work to spark discussion of additional efforts.

In her next major course of research, Pager hopes to explore the roots of employers' attitudes. She has been interviewing hiring managers of New York firms about their experiences with workers of different races and has found many quite forthcoming.

"There are broad prejudices, about which employers have been surprisingly candid," she said. "I've been told that black workers are lazy, that they dress badly, that they have chips on their shoulders. And yet, many of these perceptions are only theoretical. Those who actually have had close working relationships with blacks report very positive experiences."

Although she was a psychology major, Pager's interest in sociology blossomed during her undergraduate years at UCLA. Her psychology adviser had a somewhat nontraditional area of expertise -- education systems in Japan, Korea and the United States -- and in working with him, she began to see that many of the issues that piqued her interest were more closely aligned with sociology. After graduating in 1993, she moved to Washington, D.C., to work in education-policy research, pursuing her interest in exploring the role of education in helping to mitigate racial and socioeconomic inequality.

Channeling her interests back into academia, Pager went on to earn master's degrees in sociology from the University of Cape Town in South Africa in 1996 and from Stanford University in 1997. At the University of Wisconsin-Madison, where she completed her Ph.D. in 2002, Pager developed her focus on issues of race, incarceration and the labor market.

A Fulbright grant for the 2002-03 academic year allowed Pager to explore these key issues in Paris at a major French research institute, the Centre de Recherches Sociologiques sur le Droit et les Institutions Pénales. She studied new immigrants in France, many of whom are North African, and drew several parallels between their experiences and those of blacks in the United States. The most recent wave of immigrants has created strong perceptions of social delinquency and disorder, and gave rise to a much more aggressive form of criminal justice.

"At that time, Nicolas Sarkozy (then minister of the interior, now president of France) was introducing zero-tolerance policies on crime and increased policing of immigrant neighborhoods," Pager explained. Partly as a result, immigrants made up 30 percent of France's prison population in 2002, though they only accounted for roughly 6 percent of the overall population.

"There is a widespread assumption that the process of assimilation is working smoothly, but I found many indications that it's not so easy for these minority groups," Pager said.

As Pager's year in France drew to a close, she returned to Northwestern University, where she had deferred an earlier appointment in order to pursue the Fulbright experience. After one year, she happily accepted an offer to join Princeton's faculty. "Princeton was building what seemed like an empire in research in inequality," she said, citing work in the Department of Sociology and in the Woodrow Wilson School of Public and International Affairs. "I've found a lot of terrific synergies, particularly with the psychology, economics and politics programs."

Pager co-taught "The Sociological Perspective," the department's introductory course, with Mitchell Duneier this fall. She previously has taught an undergraduate course on "Sociology of Crime and Punishment" and a graduate course on "Race and Ethnicity." She is also a faculty associate of the Office of Population Research and the Program in Law and Public Affairs.

Pager, who was promoted to associate professor this past summer, has received three major early career grants from the National Institutes of Health, the National Science Foundation and the William T. Grant Foundation.

"Devah is a terrific asset to the department and to the discipline of sociology," said Wuthnow.

Pager's "Crime and Punishment" class sparked an ongoing interest in sociology for senior Sarah Halprin. Pager currently is advising Halprin on her senior thesis, which concerns the social stigma that comes along with incarceration. Halprin is exploring differences in how convicts' home communities affect their social standing after being released from prison. For example, in communities with low rates of incarceration there may be a terrible stigma attached to having been in prison, while in communities with high rates of incarceration there may be little social impact and less of a deterrent effect.

"I was initially inspired by her work, and I have asked her for her opinion and help on several things over the years," Halprin said. "Now that she is my thesis adviser, she is providing me with the insight and advice on how to go about doing my own study in the best way. Her experience in criminal sociology and sociological research in general is such a resource for me as I work through my own project."

For her part, Pager enjoys the close contact that comes with advising students. "The advisees I've had typically have been not just smart, but also deeply engaged in their projects and excited about the work," she said. "It's fun to work with students in taking an abstract interest and turning it into a concrete research project."