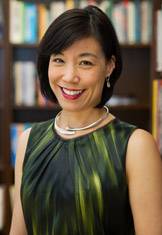 Photo by Sameer A. Kahn/Fotobuddy

This semester, 43 Princeton undergraduates are exploring the political development of America's racially disparate crime policy in the course "The New Jim Crow: U.S. Crime Policy from Constitutional Formation to Ferguson." The course, being taught for the first time, is crosslisted with the Center for African American Studies and the Department of Politics.

Instructor: Naomi Murakawa, an associate professor of African American studies, whose scholarship focuses on racial inequality in 20th- and 21st-century American politics, with specialization in crime policy and issues related to mass incarceration. She is the author of "The First Civil Right: How Liberals Built Prison America" (Oxford University Press, 2014), among other publications.

Description: Murakawa said the course is framed by two critical questions. The first is: "How did we get to this incredible place — the largest-scale experiment with punishment that has ever existed?" The second is: "Is there racism in the criminal justice system?" Of course there is, she said, but it remains a controversial question for some. By examining the historical pathways of post-civil rights America, Murakawa said she wants students to consider "what has happened in our political and social construction of racism that makes this seem like a controversial question."

Murakawa explained: "You can start with some very basic gaps. In the 1990s, the black-to-white incarceration ratio was 8:1. The United States incarcerates a higher percentage of its citizens than any nation in the world, and that's just the people we put in cages. You also have to add to that all the people we have on parole, on probation, in juvenile detention, immigrant detention and who wear ankle bracelets. You also have to look at expulsion and suspension rates in schools, which are also forms of punishment. For young black girls in particular, the risks of being suspended or expelled are off-the-charts high."

The takeaway: Murakawa said most of the students in the class chose to take it because they know that mass incarceration and racism are major issues, and they want to learn more. She knows that most will have careers unrelated to these topics, "but they will all have lives where race and racism is an issue. My hope is that students will leave with the analytical tools to think about the social construction of racism," she said.

"The culture of which Princeton students are a part tends to think of fighting racism as 'multicultural days,' as being nice and considerate and welcoming. That's truly not what we're talking about," she said. "We're actually talking about the stakes of who lives and who dies, of who's put in cages, of who's worth protecting, and who is easily disposed of in the name of protecting everyone else." 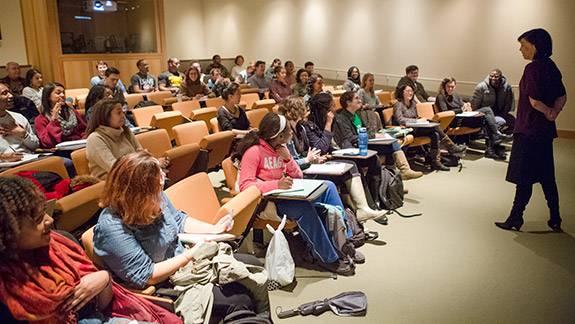 Murakawa leads a discussion focused on criminogenic family structure — the family structure that is prone to cause criminality. By examining the historical pathways of post-civil rights America — including issues and policies related to mass incarceration — Murakawa wants students to develop "the analytical tools to think about the social construction of racism." (Photo by Denise Applewhite, Office of Communications)

She opened by asking the students to first define the hegemonic family, the supposed nuclear family.

Students tossed out: "Two biological straight parents with 1.2 kids," "lives in a house and owns a house," "parents play an active role in education," "dinner on the table every night."

To illustrate how political storylines shape society's views of the dysfunctional family as well as policy, Murakawa turned to the Moynihan report "The Negro Family: The Case for National Action." Written in 1965 by Daniel Patrick Moynihan for the Department of Labor during the Johnson administration, the report painted a bleak picture of the broken black family, which produces "crime, violence, unrest and disorder." This report, explained Murakawa, set forth the description of the hegemonic family.

"Every narrative political storyline serves a purpose," Murakawa told the students. "The intellectual challenge is to ask yourself the question, 'How is that story being used?' In particular, the story of the dysfunctional black family is being used to propel what kind of policy interventions?"

Readings shed additional light on the topic. The class considered the political construction of the "fatherless" black family, a term explored in depth in Princeton Professor of African American Studies Imani Perry's book "More Beautiful and More Terrible: The Embrace and Transcendence of Racial Inequality in the United States." Amy Chua's controversial 2011 Wall Street Journal article "Why Chinese Mothers Are Superior" sparked a lively discussion of a "model minority" family construction, the "tiger mom" that contrasts starkly with the concept of the "bad black mother welfare queen."

"The story of the criminogenic black family is so deeply violent and so pervasive," Murakawa told the students. 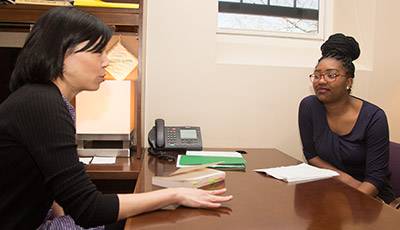 During office hours, students in the class, such as freshman Adetobi Moses (right), have the opportunity to meet with Murakawa individually. (Photo by Amaris Hardy, Office of Communications)

Students say: Senior Diane Hu of Sammamish, Washington, a concentrator in the Woodrow Wilson School of Public and International Affairs who is also pursuing a certificate in American studies, said the spring 2014 course "Race and Public Policy," taught by her thesis adviser Douglas Massey, the Henry G. Bryant Professor of Sociology and Public Affairs in the Wilson School, "first opened my eyes to the war on crime and drugs." She enrolled in "The New Jim Crow" because she "wanted to continue thinking about these relevant and pressing issues, especially in light of recent events."

Hu has invited friends to come to Murakawa's lectures. "I wish everyone took this class because Princeton as a whole would greatly benefit from it," she said.

Freshman Adetobi Moses took "Public Policy in the American Racial State" her first semester at Princeton. "I think it takes a certain type of instructor and scholar to deliver with such candor the problems that we as a country still need to face and the ways in which we must face them," said Moses, who is from Boston. "Professor Murakawa is incredibly passionate about her work, and in turn I am incredibly passionate about her class."

Senior Steven Harris, who grew up outside Chattanooga, Tennessee, is a history major who is also pursuing a certificate in African American studies. Noting that his thesis research and his senior year have been heavily influenced by Michael Brown's death and the #BlackLivesMatter movement, "this class has a sense of significance and immediacy," he said.

This semester, junior Jameil Brown of Leander, Texas, a concentrator in the Wilson School, is taking "The New Jim Crow" as well as "America Then and Now," which Murakawa is co-teaching.

For Brown, a particular highlight of "The New Jim Crow" course is how it relates to the national conversation on police brutality. "I like to tell others that I leave every class angry, but also inspired to inform others and do my part in moving towards a fairer justice system," he said.