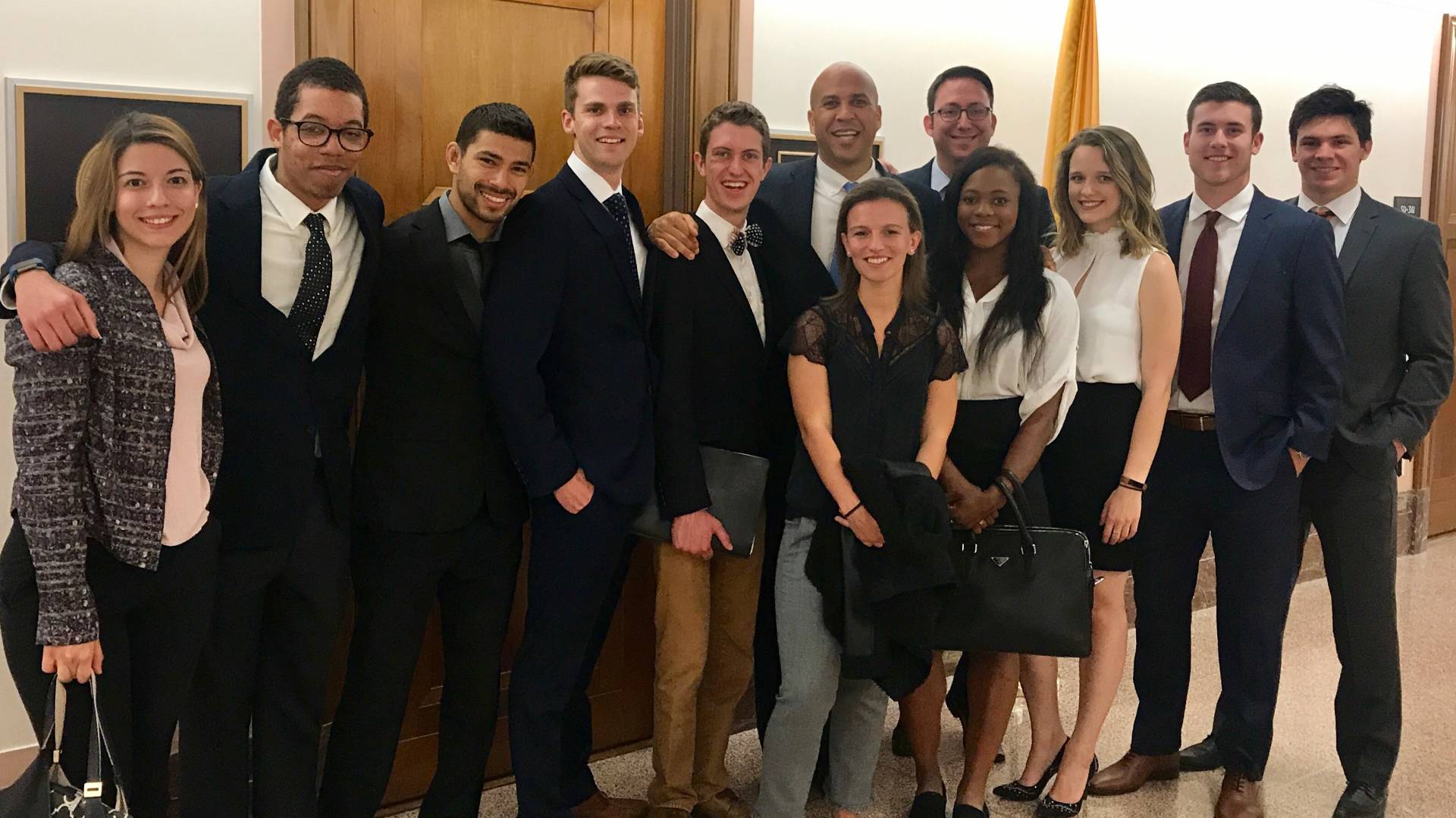 On May 9, Princeton juniors enrolled in a policy taskforce at the Woodrow Wilson School of Public and International Affairs presented their research on mass incarceration in the United Stated to Sen. Cory Booker (sixth from left at back). Booker will speak at Princeton on June 4 at Class Day.

This spring, Princeton juniors studying mass incarceration in the United States traveled to Washington, D.C., to present to U.S. Sen. Cory Booker their policy findings and recommendations from a semester of research.

The 10 students were participants in the policy task force “Rethinking Criminal Justice: Policy Responses to Mass Incarceration,” which was led by Udi Ofer, a visiting lecturer at the Woodrow Wilson School of Public and International Affairs.

While each student studied a different aspect of incarceration in the United States, which disproportionately affects minorities and other marginalized groups, they collectively identified a key single theme: There is a pressing need for the U.S. criminal justice system to be less punitive and instead to rehabilitate the people who interact with it.

Among their recommendations, they urged policymakers to reduce some felony drug convictions to misdemeanors upon completion of a rehabilitative program, and to offer businesses economic incentives to hire people who had been incarcerated.

“Mass incarceration is the result of deliberate choices made by policymakers over the past 40 years to implement policies and practices that have led to more people being incarcerated for longer periods of time and with fewer options for release,” said Ofer, who serves as the American Civil Liberties Union (ACLU)’s deputy national political director and leads the organization’s Campaign for Smart Justice, which is dedicated to ending mass incarceration.

Today, Ofer said, policymakers on both the political left and right are recognizing that something must be done to decrease incarceration rates and to make the criminal justice system fairer.

The policy task force is the most distinctive feature of the Wilson School’s undergraduate program. Not a traditional course, the task force is a laboratory in which students learn to conduct research and make policy recommendations in much the same way that policy analysts do.

In Ofer’s task force, students were exposed to speakers and authors from across the political spectrum. For example, they read work by Newt Gingrich, the conservative former U.S. House speaker, and Michelle Alexander, the liberal lawyer and civil rights advocate who has called mass incarceration “the new Jim Crow.” Moreover, Ofer said, the students themselves represented a range of political views and life experiences. 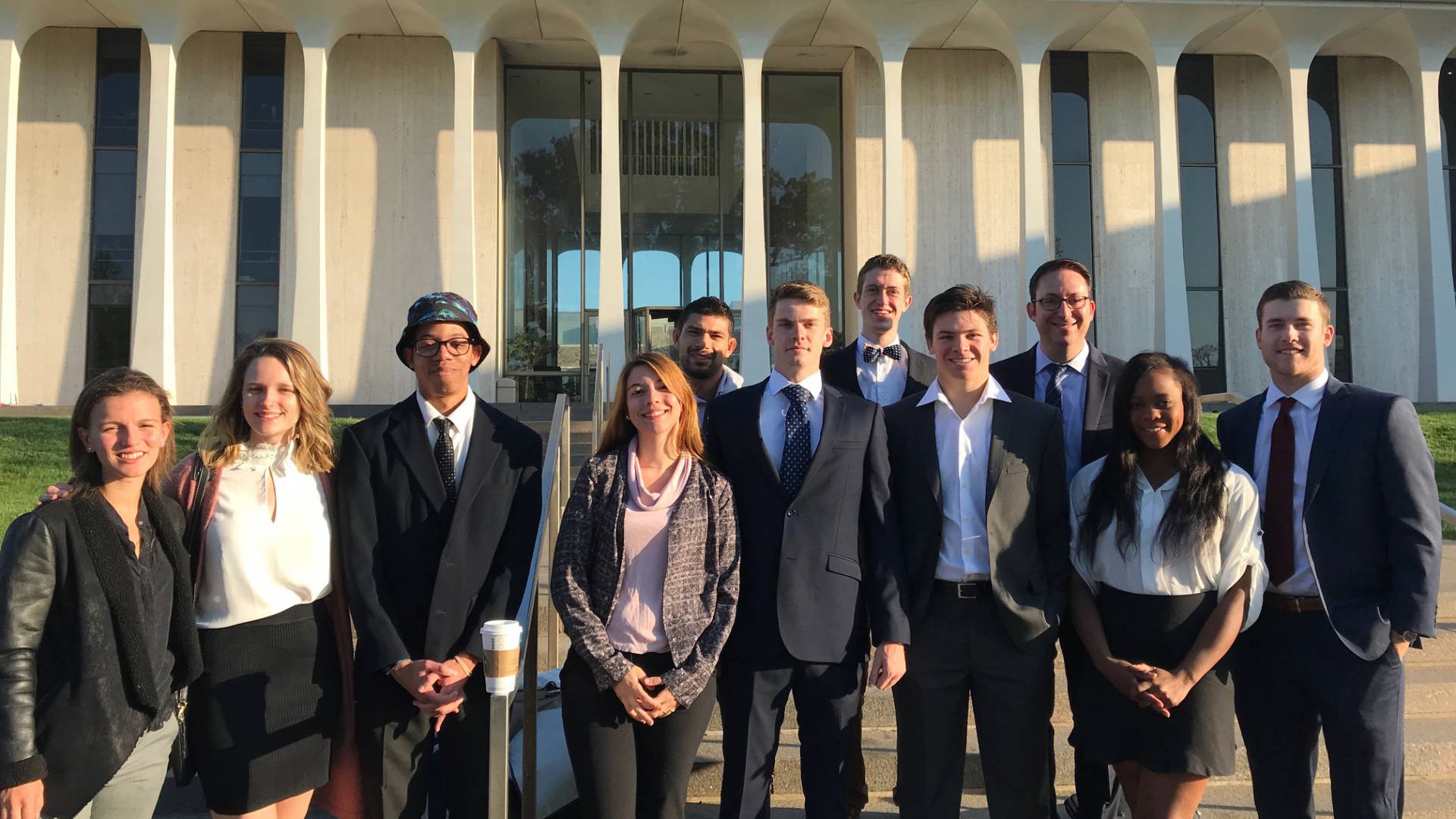 The task force participants studied the issue of mass incarceration under Visiting Lecturer Udi Ofer (back row, third from left), who serves as the American Civil Liberties Union’s deputy national political director and leads the organization’s Campaign for Smart Justice, which is dedicated to ending mass incarceration.

That ideological diversity made the task force more productive, said task force participant Maria Jerez. “We had really good discussions in class, hearing different points of view,” she said. “People were very insightful — we learned from each other as well as from the professor.” She also credited Ofer with being “very aware of and fair to both sides.”

Samuel Parsons chose to work on responses to violent crime. Parsons said people are much more willing to see the life circumstances behind nonviolent crimes, but his studies in philosophy on free will and responsibility have led him to the view that “violent crime is as determined by circumstance as any other.”

“One criticism of the criminal justice reform movement is that it has focused too much on just nonviolent offenses,” Ofer said. “When I posed this to the students, I described it as one of the most challenging problems. But [Parsons] jumped up and wanted to take it on and challenge the idea that violent crime should be viewed differently.” Parsons pointed out that even most people who commit serious offenses will eventually be released into the community. “If we do nothing to help them become better citizens, we’re not helping ourselves,” he said.

Jerez and Parsons are volunteer tutors for people incarcerated in New Jersey state prisons. One speaker who made an impression on them was Bill Cobb, an ACLU colleague of Ofer who had been incarcerated himself and now is deputy director of the ACLU Campaign for Smart Justice. Before coming to the ACLU, he was accepted for 12 different jobs, only to be let go when the employers learned of his past incarceration. His experience served as an example of the restrictions people who have been incarcerated face in many aspects of their lives. “It was helpful to have his case to point to when teaching re-entry through PREP, the volunteer program I work with,” Jerez said.

“Meeting [Bill] and hearing about his employment experience after incarceration humanized the issue a lot for me,” Parsons added.

On May 9, the students were excited to present their findings to Booker, who has been a leading voice in Congress for criminal justice reform, and his staff. Condensing a semester’s worth of work into a presentation appropriate for a busy U.S. senator was a daunting task.

“We had to present nine different topics in a very short period of time,” Jerez said.

One way the students handled this challenge was by dividing into two groups — one that had examined policies that have led to more admissions into prison and for longer periods, and one that had focused on how mass incarceration affects specific groups, like those in the LGBTQ community. “Though it was challenging to get all the important points of our research into the presentation, it allowed us to really understand each other’s work, which was very interesting,” Jerez said.

To help the students prepare for the presentation, John “Newby” Parton of the Class of 2018 arranged for a training session with Matt Eventoff, owner of the communications company Princeton Public Speaking. Parton served as senior commissioner for the taskforce, which entailed drafting the final report that brought together the analysis and recommendations contained in the junior papers. The session at Princeton Public Speaking helped the students condense their information and refine their presentation styles, Jerez said.

Jerez and Parsons were two of the students chosen to present to Booker’s office. While the “high stakes” initially made him nervous, Parsons ultimately felt the task force’s visit added value and was appreciated.

“Some of our strongest and best-received recommendations were those that called on Sen. Booker to solicit the collection of data, especially through the federal Bureau of Justice Statistics, that will allow for broader, stronger research on the criminal justice system in the future,” Parsons said.

“I was impressed by the students’ passion, creativity and thoughtfulness,” Booker said. “We are reviewing the final report and thinking carefully about how to put these recommendations into action.”

For Ofer, seeing the students meet with the senator represented the culmination of months of hard work. “I was really proud to see them present their findings and recommendations to Senator Booker. They took an incredibly complex issue — mass incarceration — and distilled it down to key facts and solutions. This was the perfect bridge between their academic lives and real-world experience in policymaking.”

On June 4, Booker will come to Princeton to speak at the Class Day ceremony for graduating seniors.