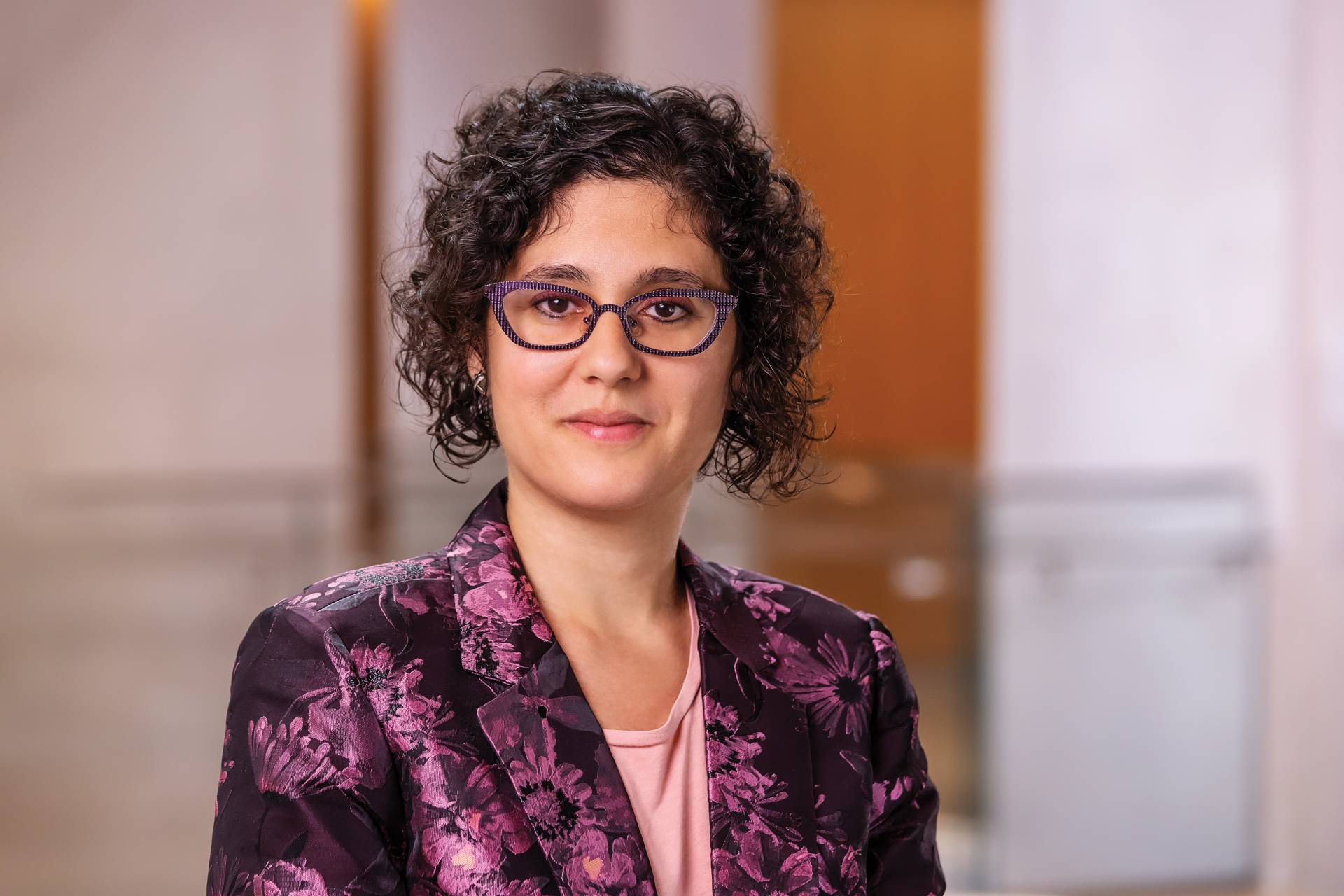 “When the horns started to blow and we saw the Statue of Liberty, I thought I was in heaven. Really. She’s up there and saying, ‘Come on in. From now on you are a free person.’”

These are the words of Turkish immigrant John Alabilikian, who came to the United States in 1922, collected by the Ellis Island Foundation in 1985 as part of its oral history library. In his interview, Alabilikian described escaping the Armenian genocide and journeying to America.

Personal anecdotes like these serve as a rich source of data for economist Leah Platt Boustan, who brings modern statistical analysis and big-data tools to the study of historical events and trends. With the recent digitization of first-person accounts and other documents, Boustan can uncover insights from people’s personal experiences in ways previously not possible. “It’s almost as if we can conduct surveys of people who lived in the past,” she said. 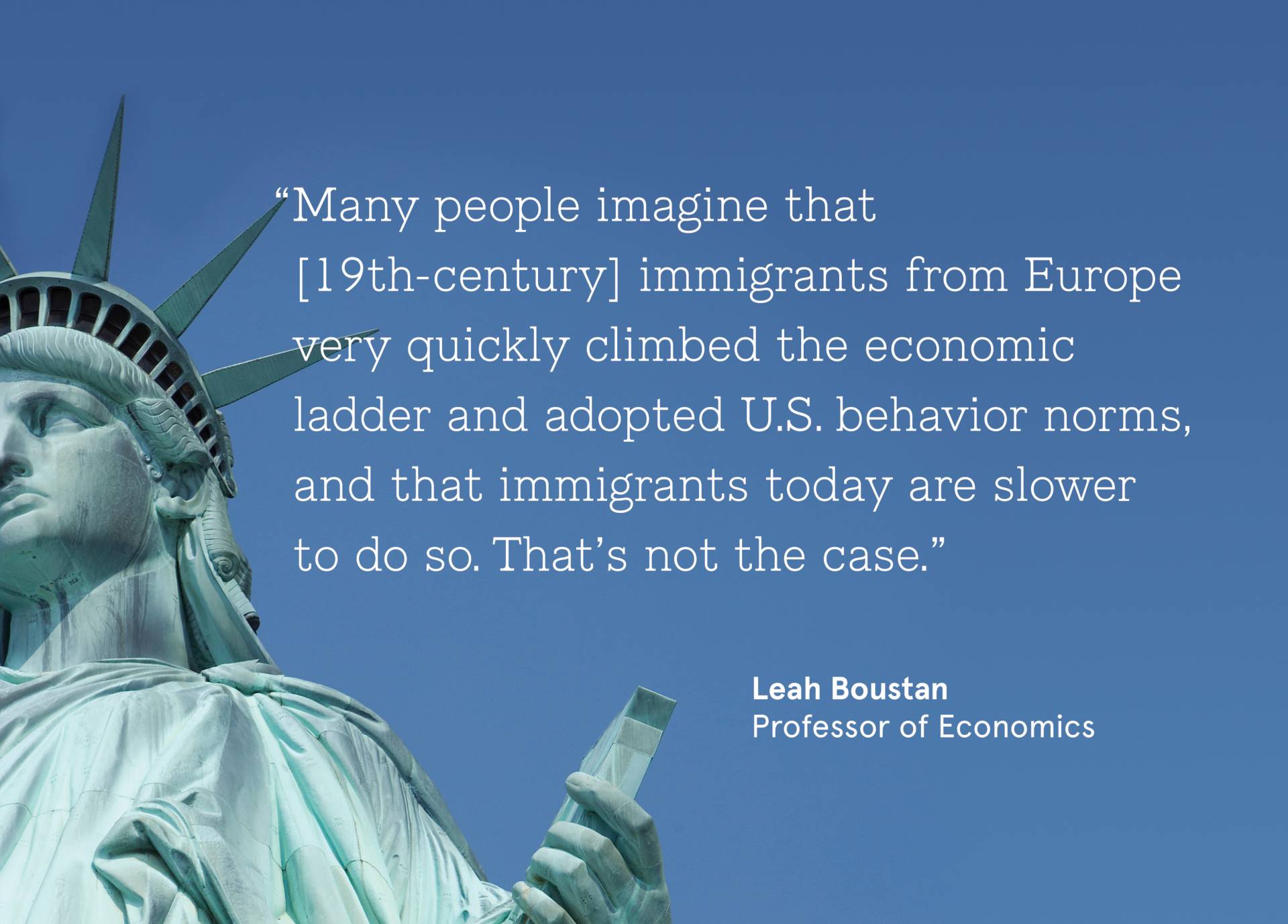 Boustan, who joined Princeton as a professor of economics in 2017, has an impressive record of proving and disproving ideas that people believe based on anecdotes or “gut feelings.” In the past, economists and historians had few data tools, but with today’s powerful computers and mathematical approaches, historical perspectives can be tested against hard numbers.

“Often what we think we know, we don’t really know,” Boustan said. “If you start to introspect, and ask, ‘Where do my beliefs come from?’ you might realize they come from your family’s experience or from relatively few anecdotes. We rarely test our beliefs with thousands of cases.” Boustan tries to rediscover that lost nuance, giving economists and historians a statistical footing for their research.

One of the questions Boustan has tackled is the issue of “white flight.” Between 1940 and 1970, white Americans left cities in large numbers, but historians have debated whether this exodus was motivated by the desire to pursue opportunities in suburbs or because of an influx of black Americans. Boustan’s analysis, published in the Quarterly Journal of Economics in 2010 when she was on the faculty at the University of California-Los Angeles, suggests that both were true.

Another of Boustan’s recent projects is on the age of mass migration, a period from around 1850 to about 1920, when more than 30 million Europeans moved to the United States. Working with longtime collaborators Ran Abramitzky at Stanford University and Katherine Eriksson at the University of California-Davis, and with support from the National Science Foundation, Boustan compared historical data to today’s records, asking: Are immigrants today assimilating more slowly than they did in the past?

“Many people imagine that immigrants from Europe very quickly climbed the economic ladder and adopted U.S. behavior norms, and that immigrants today are slower to do so,” Boustan said. “That’s not the case.” 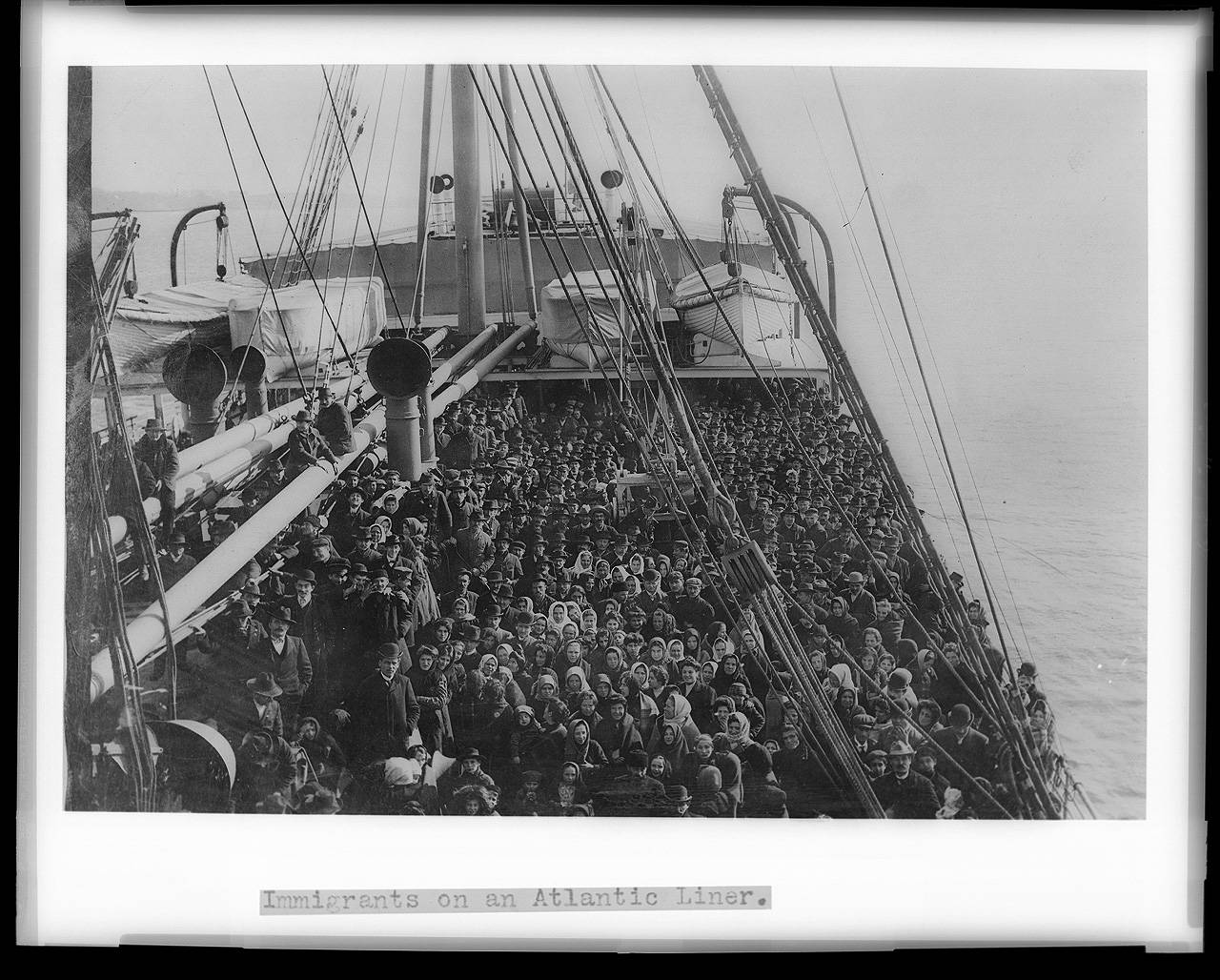 Leah Boustan, professor of economics, uses digitized historical records and other sources — like this 1906 photograph of immigrants on an Atlantic liner — to give researchers a statistical footing for studies on immigration, past and present.

Photo by Edwin Levick courtesy of the Library of Congress

Prior work suggested that European immigrants during the age of mass migration were paid less than native-born workers upon first arrival, but then quickly caught up. Boustan and her collaborators tracked the occupations of 21,000 natives and immigrants over two decades, and, in work published in 2014 in the Journal of Political Economy, showed that this common wisdom does not fit the facts in two different ways. Many recently arrived immigrant groups did not have lower earnings than natives and, overall, the income of immigrants and natives rose at close to the same rate.

Slow rates of economic assimilation are consistent with the experiences of recent immigrants, according to studies by other researchers, Boustan said. “There is nothing special — or necessarily alarming — about economic convergence that takes more than one generation,” Boustan said. “We have been there before.”

One measure of cultural assimilation that Boustan looked at was how immigrants named their children. Because selecting a child’s name costs nothing, and thus is independent of socio-economic status, Boustan argued that names indicate a family’s eagerness to adopt American culture. In work supported by a grant from the Russell Sage Foundation, she and her colleagues used millions of entries from recently digitized census records to calculate a “foreignness index” for each name in the early 1900s. She conducted a similar exercise using birth certificate records from California today. In both cases, she found that immigrants shift away from foreign-sounding names as they spend more time in their adopted nation, and at the same rate.

“What was striking about those two sets of analyses — the past and present — is that the speed of cultural assimilation, by this measure, is almost identical in the past and present,” Boustan said. The study is detailed in an NBER Working Paper posted in July 2016.

Boustan’s work is part of a growing trend in economics toward harnessing large data sets to explain historical observations, said her colleague and former mentor, Henry Farber, Princeton’s Hughes-Rogers Professor of Economics. Farber met Boustan when she was an undergraduate at Princeton in the late 1990s. Boustan later earned a Ph.D. at Harvard University in 2006 and then became a professor at the University of California-Los Angeles.

Today, Boustan’s office is only a few doors down from Farber, who is next door to his own dissertation adviser, Orley Ashenfelter, the Joseph Douglas Green 1895 Professor of Economics — three generations of empirical economics in one hallway. “Princeton is lucky to have her on the faculty,” Farber said.

Boustan is also part of the trend toward increasing female participation in a historically male-dominated discipline. When a leading journal recently asked her how the field might attract and train more women, she was caught off guard. “I realized that I didn’t know much about the overall situation of women in economics — I only knew anecdotes from my personal experiences,” Boustan said.

So she began investigating the problem with her characteristic big-data approach. “It is a very important question, and the best way to work on big questions is to take a look at the data,” she said.

She paired with graduate student Andrew Langan to collect data on the male-female graduate student ratios in economics departments at leading research universities and learn more about why some programs have more success than others in training women. Graduate programs in economics are on average 30 percent female across the nation, with some as low as 10 percent female and others achieving a 50-50 balance, Boustan and her team found.

“The average picture looks gloomy, but there are some bright rays,” Boustan said. For example, even departments with high numbers of male students and faculty can serve female students well if they provide opportunities for training and mentoring, they found.

Boustan keeps this in mind as she mentors and advises students in Princeton’s economics department. One advisee, Ji Won Choi, said, “I hope I can be an example, like Leah, for others in the future.”

Until recently, Princeton’s Department of Economics had few women in senior faculty positions, but the department has doubled its number of female faculty members over the past four years, said Janet Currie, the Henry Putnam Professor of Economics and Public Affairs at the Woodrow Wilson School, who was department chair until June 2018. “Nevertheless,” Currie said, “we are not where we would like to be, and we’ll need continuous effort not to lose the gains we have made and to diversify the faculty and student body in other dimensions.”

With so many charged topics facing society today, from the equitable treatment of women in the workplace to the role of immigrants in building the nation, Boustan’s data-driven approach to controversial issues is more relevant than ever. To explain the importance of this work, Boustan quotes her former mentor, the Harvard economic historian and labor economist Claudia Goldin: “The best historical questions are the ones that speak to the world we live in today.”