Long before Leah Boustan was a professor of economics at Princeton, she was a Princeton undergraduate putting the final touches on her senior thesis. 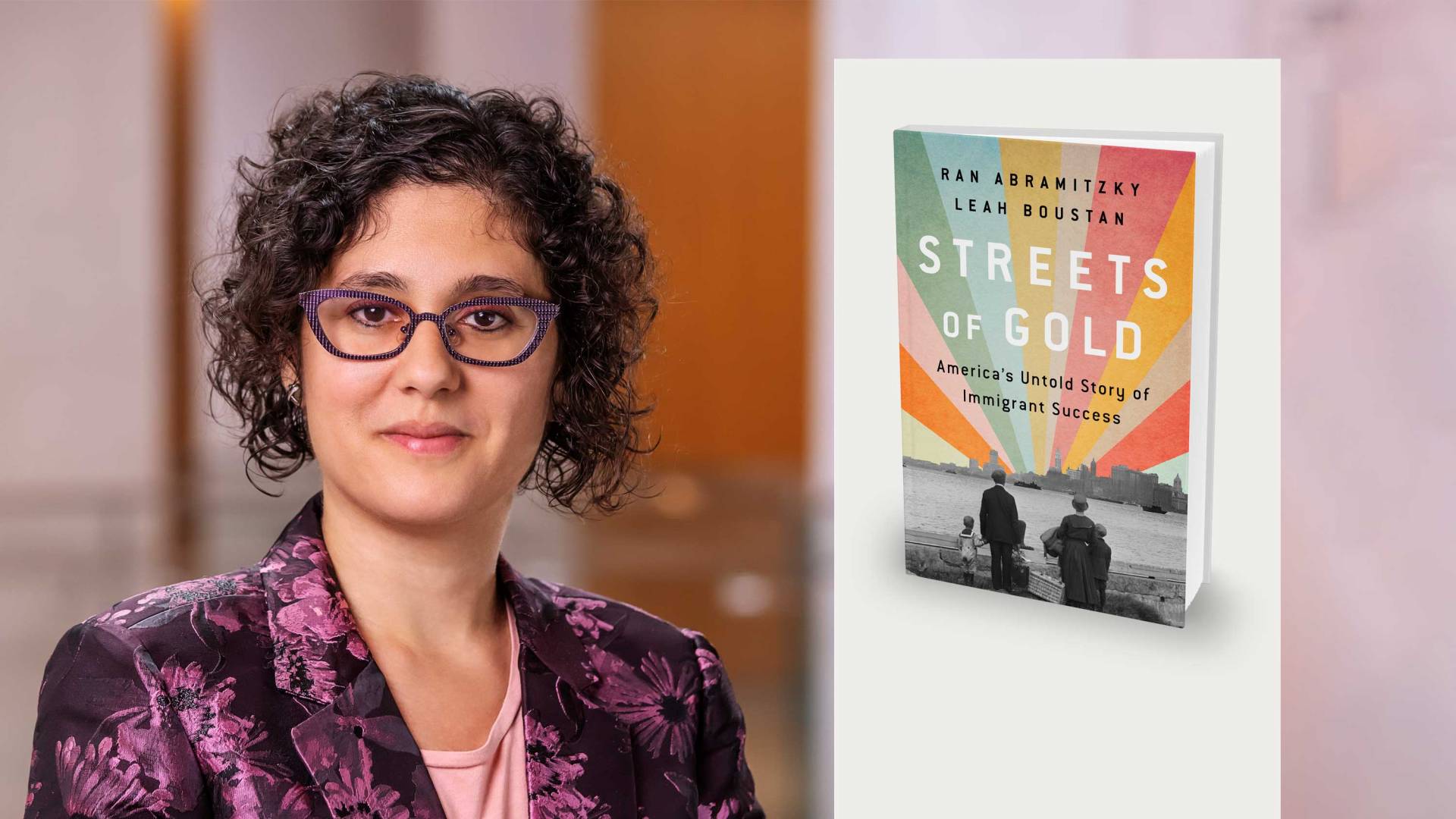 Working alongside her adviser, longtime professor Henry “Hank” Farber, Boustan published a 100-page research project that compared outcomes for students who dropped out of high school in the early 1960s with those who dropped out decades later.

"I can’t remember the exact moment I decided to become an economic historian, but I remember telling Hank I was really interested in comparisons of cohorts over time," Boustan said. "That interest is the basis for a lot of my work even today."

Twenty-two years after graduating from Princeton, Boustan has published a book that uses troves of data and the latest innovations in data science to examine an issue Boustan considers "one of the most fraught issues in U.S. politics" both today and in the past: immigration. 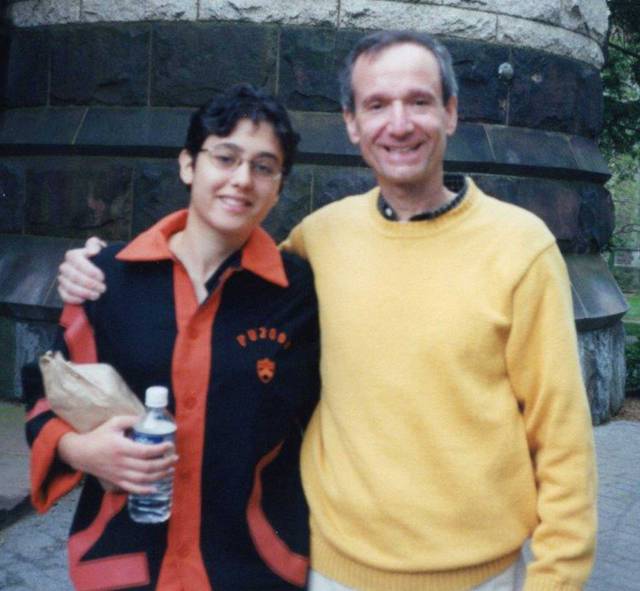 Leah Boustan as a Princeton undergraduate with her father, Harlan Platt

Written with her longtime collaborator Ran Abramitzky of Stanford University, Streets of Gold: America's Untold Story of Immigrant Success introduces the public to more than a decade of her rigorous, empirical research on the personal and society-wide impacts of immigration.

Weaving together personal family stories — including their own — with insights from the data, Boustan and Abramitzky tell an uplifting story about the promise of immigration. One finding Boustan found particularly surprising is how well children of immigrants have done economically, both today and in the past.

“The fact that children of immigrants who came from poor families in the 1980s moved up the economic ladder at the same pace as children of the Ellis Island generation — that floored me," said Boustan.

One hundred years ago, Italy — a major sending country of immigrants to the U.S. — had about half the GDP per capita of the United States. Once in America, however, the sons of Italian immigrants rose up. Those who grew up in the 25th percentile of income distribution in the late 1800s earned enough as adults to be near the 60th percentile.

Today, children of immigrants from Nicaragua, which has about one-tenth the GDP per capita of the United States, see similar rates of economic mobility.

"There’s no reason that has to be true — but it turned out to be," Boustan said. "It's something really remarkable we're able to see because of the data."

That data — and the methodologies Boustan and Abramitzky developed to make use of it — deserve almost as much attention as the findings.

In addition to working with and linking modern data like IRS tax records and birth certificate files, a partnership with the genealogy website Ancestry.com made it possible for Boustan and Abramitzky to automate searches and follow millions of families over more than 100 years of Census data. From there, they worked with audio recordings of historical interviews and congressional speeches, using machine-learning tools to analyze these texts and glean big-data insights.

The rigor of the research is one reason it's so groundbreaking, and a tradition Boustan can trace to her days as a Princeton undergraduate.

As a high school debate student interested in public policy, Boustan applied early decision to Princeton with the aim of declaring a concentration at the School of Public and International Affairs (SPIA). But her time learning from Professor Farber changed her mind.

"I took economics classes in order to major in SPIA,” she said. “One of those classes was ECO 313: Applied Econometrics with Hank Farber, where we used real data sets to answer questions. I fell in love with that class."

Boustan told Farber she wanted to spend a summer working in Washington, but he persuaded her to stay in Princeton instead to learn more about data analysis and to see how building expertise in a discipline like economics could help her produce the kind of policy-relevant work that legislators really need.

"So that’s what I did, and I never really looked back," she said.

Boustan declared Economics as her concentration at Princeton and started spending her free time in the computer lab of the Industrial Relations (IR) Section — a group widely known for training and supporting some of the most famous labor economists and empiricists in the field, including 2021 Nobel Laureates and Princeton alumni David Card and Joshua Angrist.

From there, she went on to earn a Ph.D. from Harvard. After several years teaching at the University of California Los Angeles, Boustan returned to Princeton in 2017.

As Boustan hits the road to talk about her new book, she's able to marvel at how things have come full circle. When Farber signed on as Boustan's undergraduate senior thesis advisor, he was the director of the IR Section. Last year, Boustan herself was given the title, an honor she doesn't take for granted.

“The IR Section is a true intellectual community,” she said. “The faculty sit right beside the graduate students — almost like in a lab — and work closely together. And the research coming out of the Section is always connected to the real world, from minimum wage to unemployment to the immigration work that I have been doing.”

For Farber, who says Boustan was one of the best undergraduate students he had the pleasure of teaching in his 30 years at Princeton, having Boustan as a colleague has been “a source of some pride.”

Farber also noted how Boustan, no longer the student, has herself excelled in role of advisor. “Leah has really played a key role in guiding the IR Section not only on the research side, but on the teaching side as well,” he said.

In addition to committing her time as an advisor to dozens of undergraduate and graduate students, Boustan recently took on the task of teaching Princeton’s Principles of Microeconomics course — a popular class for undergraduates across a wide range of majors.

“I taught that class for many years myself,” said Farber. “It was wonderful to see Leah make it her own and take it in a whole new direction. The reaction from students this year was very positive.”

The possibility for change

Boustan says her research and her role as an economic historian give her hope for the future of immigration policy.

“Sometimes we feel so stuck. We feel polarized. Congress can’t pass legislation. On immigration, we’ve been at a stalemate for 50 years. But you look at history, and you see we’ve had wild change. It reminds me I’m living in one small moment in history. I think economic history helps us recognize the possibility of scope for change.”

Specifically, she hopes much-needed policy change will come for the Dreamers, undocumented immigrants who came to the United States as children. "Our research shows the most optimistic vision of what the children of immigrants can achieve," she said.

Because it can take 30 to 40 years to follow children into the labor market, her research on modern immigration focuses on children born in the 1980s. These children lived in households who benefited from immigration amnesty programs during the Reagan administration. Boustan worries that studies of more recent immigrant arrivals — many of whom are undocumented without any path to citizenship — could produce less optimistic findings.

"I’m worried about the next generation and what I'll find when we write Streets of Gold 2.0," she said. "There’s lots of promise for children of immigrants if they and their parents have some pathway into the formal labor market. I think it’s urgent to pass DACA as legislation and really return to the idea of comprehensive immigration reform."

Readers interested in learning more can read about five immigration myths dispelled in "Streets of Gold." This Thursday, June 9, at 8:30 p.m. ET, Professor Boustan will answer questions about her research in a Twitter Spaces event with Joey Politano, author of the Apricitas Economics blog. Join the event.